The province elected its first premier in 1867 — and it endured plenty of bribery, voter intimidation, and mud-slinging to get there
By Jamie Bradburn - Published on May 01, 2018
Journalist and politician George Brown, date unknown. (Toronto Public Library)

​This is the first in a series of articles detailing the elections that shaped Ontario.

Eighteen sixty-seven saw both Ontario’s first post-Confederation election and Canada’s first federal campaign. Both were run according to the same rules. Both featured nasty name-calling. The winning leaders even had similar names: John A. Macdonald claimed victory in Ottawa, while John Sandfield Macdonald (no relation) carried Ontario.

The voting process and its many restrictions now seem absurd. Voters had to be male, 21 years of age or older, and born or naturalized British citizens, as Canada was considered an extension of the mother country. They had to own, co-own, rent, or occupy property valued at $100 (rural areas) or $200 (urban areas) and earn an annual income of at least $250. There was a long list of jobs that disqualified men from voting, including judge, Crown clerk, Crown land office employee, county prosecutor, tax and duty collector, political campaign worker, election returning officer, and postal worker. With rare exceptions, Indigenous peoples were also excluded.

Few politicians supported the idea of universal suffrage. Their fear, according to historian J.M.S. Careless, was that it “gave power to the most ignorant and irresponsible lower elements of society or, worse, to the corrupt and cynical demagogues who manipulated them. It meant elective offices on every level, from judge to dogcatcher, and American machine politics under bosses, instead of responsible appointment from above under the British parliamentary system. And it meant endangering of minority interests and the rights of property through the ‘tyranny of the majority’ of the electorate.” 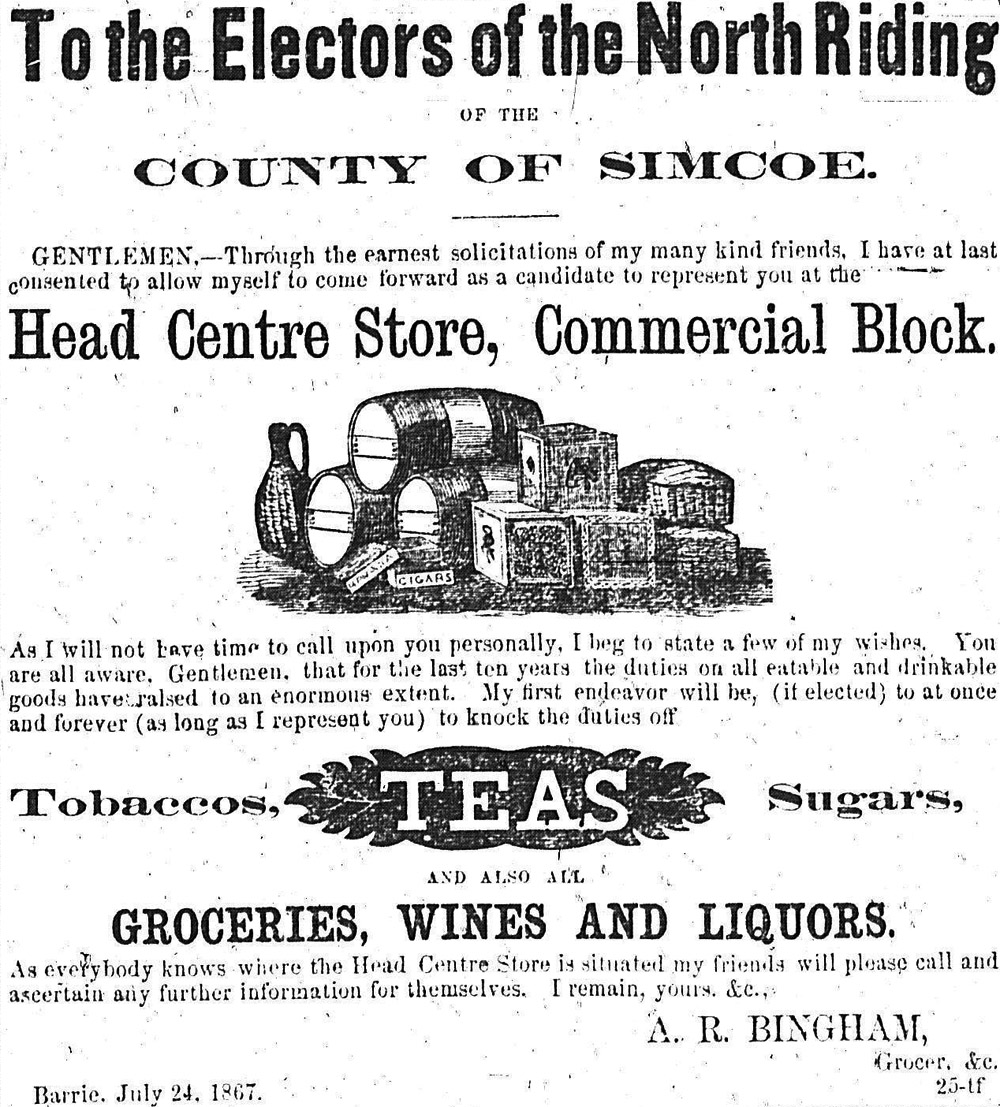 Voting in the provincial election occurred in stages across Ontario, which then stretched only as far northwest as a narrow strip along Lake Superior. Polling began on August 26 in Carleton, Kingston, Ottawa, and South Ontario (present-day Ajax, Oshawa, Pickering, and Whitby) and ended in Peel on September 21. The staggered scheduling allowed candidates who lost in one riding to try again elsewhere. While nomination meetings were held a week before polling in each riding, notices from candidates declaring their intentions began appearing in newspapers in July. These ads usually indicated that public support had encouraged the candidate to run, and were often accompanied by a list of backers. Announcements, such as the following from A.J. Eastman, who ran in Carleton, also generally made a point of catering to the candidates’ base: "This offer of support from so large a number of free and independent electors convinces me that you, as the County of Carleton, are bound to elect a man from among yourselves, and having been brought up and to the present time lived among the people of Carleton for the last forty years, I can justly lay claim to the term 'Local.'"

Such notices were also used to attack the dirty campaigning of rivals. “I find that a rumour has somewhat gained currency to the effect that I had retired from the field to make way for somebody else,” Eastman’s opponent J. Skead declared. “I think it be right to assure you that such is not the case. On the contrary, having acceded to the request of so many friends warm friends I have no intention of deceiving them or stultifying myself by any such course.” Neither Eastman nor Skead won the seat.

Those who had considered themselves part of the pre-Confederation “Reform” movement split into roughly two groups: moderates willing to continue the recent coalition with the Conservatives, and more radical members who allied themselves with George Brown’s Clear Grits. When the federal government installed an interim provincial government in July, moderate Reformer Sandfield Macdonald agreed to lead a coalition. First elected to the colonial legislature in 1841, Sandfield Macdonald had led a Reform government from 1862 to 1864. While not initially a supporter of Confederation, he developed a good working relationship with Conservative John A. Macdonald. He felt that pre-Confederation party divisions should be mended and that the quarrelsome backbenchers who had undermined previous coalition governments should be reined in.

The new premier’s relationship with Brown had always been complicated, and by 1867, it had broken down completely. When Sandfield Macdonald included several Conservatives in his interim cabinet, Brown and the radical Reformer press unleashed a torrent of insults. Calling the new government a “miserable piece of patchwork,” a “sham,” and a “wretched abortion,” Brown’s newspaper, the Globe, declared that efforts were being made to “seduce one or two weak-kneed Reformers into a traitorous alliance with the corruptionists.” This line of attack continued after the writ was dropped in early August. For their part, Conservative and moderate Reform papers stressed that the radical Reformers supported closer ties with the United States and were generally, as the Ottawa Citizen put it, “anti-coalitionists and disunionists.”

Voting in each riding was a two-day process accompanied by torchlight parades, drinking, and plenty of speeches. There were no secret ballots — at each poll, voters were asked, “Who do you vote for for the Commons, and who for the Assembly?” The answers were recorded in separate books. Intimidation was not uncommon: employers, clergy, and other powerful community figures were known to lurk around polling station. Bribes, ranging from snacks to money, were frequently offered. After the first day’s votes had been tallied and released, campaigns figured out how much effort they’d have to put in on day two to win. Voter lists could be manipulated, and there were suspicions, especially among Clear Grits in modern-day Chatham-Kent and Niagara Region, of gerrymandering. 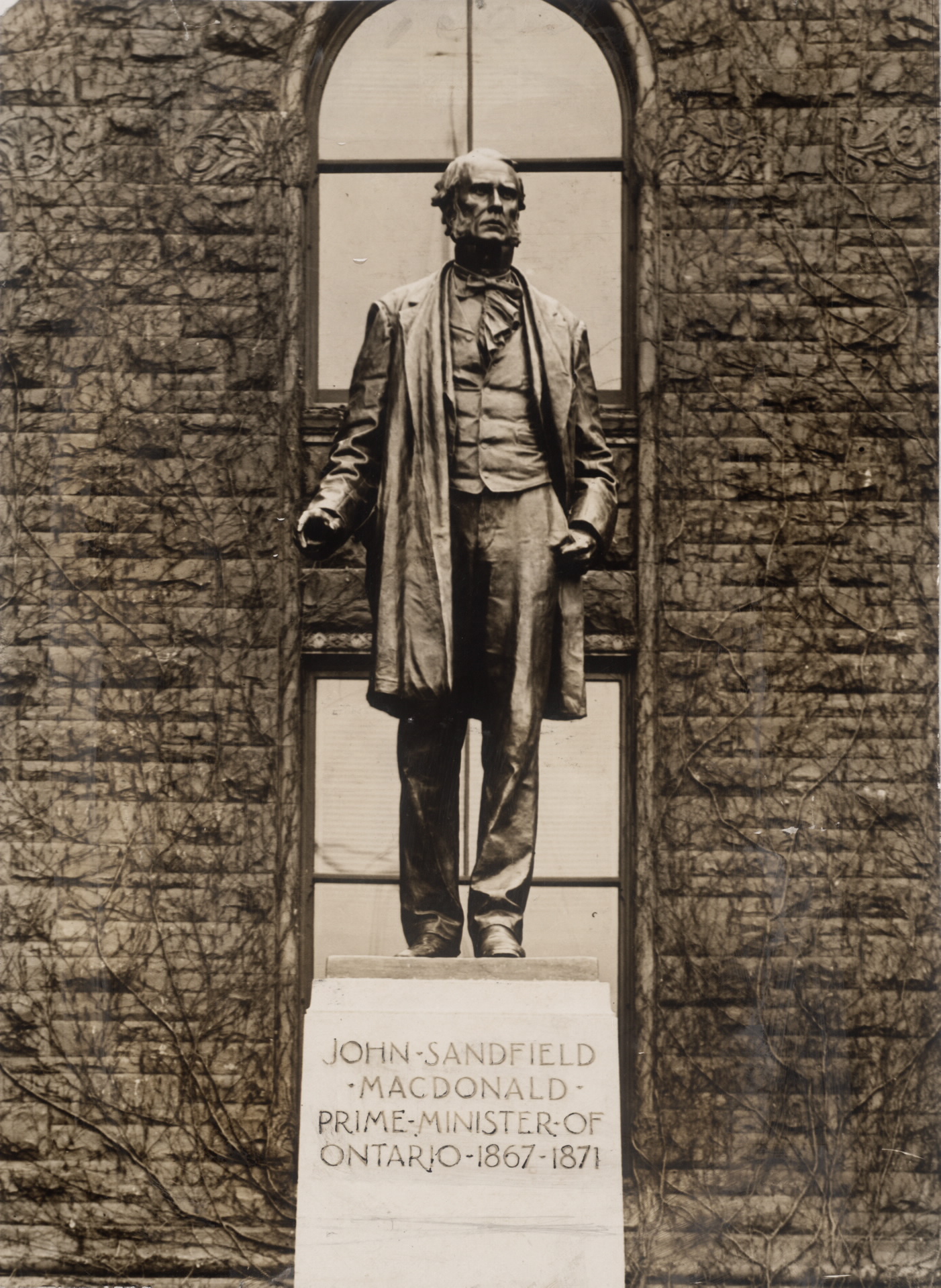 The result was a near-even split. Sandfield Macdonald gathered enough elected legislators to form a coalition government, which later evolved into today’s Progressive Conservative party — by the 1870s, candidates were running under the Conservative or Liberal-Conservative banner (the party didn’t officially become known as the Progressive Conservatives until the 1940s). Brown ran federally in South Ontario, lost, and decided not to run elsewhere. The problem for his followers provincially was that, despite claims by the Reformers/Grits that they’d govern better, they didn’t represent a clear alternative to the coalition. “The advantages of incumbency and the euphoria of Confederation,” historian Bruce Hodgins noted, “frustrated the Brownites and gave victory to the coalition forces.” Archibald McKellar, who had lost a federal race before winning provincially in Bothwell, came to be seen as the leader of the opposition, which by the 1870s had evolved into today’s Liberal party.

Sandfield Macdonald held his coalition together through 1871. He worked to maintain harmonious relations with the federal government and to build the province’s bureaucratic infrastructure. His government’s accomplishments included the Homestead Act, passed in 1868, which opened up northern Hastings County, Haliburton, Muskoka, and Parry Sound; reforms that legislated free compulsory elementary education; the establishment of colleges that evolved into today’s Ryerson University and the University of Guelph; and legislation that reduced voting to a single, uniform day across the province.