In ‘A Better Man,’ a woman sits down with her abuser years later — but how can you find resolution when your abuser won’t take responsibility?
By Nam Kiwanuka - Published on Nov 24, 2017
Filmmaker Attiya Khan and her ex-boyfriend Steve appear in the documentary ‘A Better Man.’ (Intervention Productions)

​As I watched a screening of the upcoming TVO documentary A Better Man, my body tensed in a familiar way. My breath quickened.

The film recounts Attiya Khan’s relationship with her ex-boyfriend Steve, who abused her daily during their two-year relationship when they were teens, 20 years ago. Attiya’s conversations with her ex are facilitated by a therapist; over the course of one year, the two spend eight days together — visiting the apartment they once shared and the high school they both attended when the abuse happened. We find out that teachers had known what Steve was doing to Attiya, but did not intervene.

I was in high school, too, when I escaped my abuser.  He wasn’t my boyfriend, though: my abuser was my father.

The abuse finally ended the night he kicked me out of the house. I was around 17.

That night, he pushed me down the stairs, dragged me across the floor, and slammed my head against the concrete basement floor. He wrapped his hands around my throat and stopped only when someone in the house yelled that they were calling the police.

I’m not telling you this in an attempt to shock you or elicit sympathy, and I’m not trying to bad-mouth my father. I’m telling you this because of the many adults who saw the abuse and never intervened — just like the bystanders in A Better Man who looked the other way as Steve continued to hurt Attiya.

While at school, teachers saw the bruises on my face and arms. I remember them calling the police. I remember coming home to see police cars, and I remember the police leaving. As soon as the door shut behind them, I’d brace myself for what I knew would come next. I would then return to school. The teachers and the police all knew what was happening, and nothing was ever done.

Even as I write this, I am terrified. I am terrified of my family and extended family reading this.  I’ve been told to get over it and move on. It happened decades ago. Why can’t I let go of the past and move on? I know it’s the shame speaking. Maybe it’s still hard for these adults to accept what their dear friend — my father — did. It’s still hard for me to accept. I still love him. He wasn’t always this way. When I was younger, he learned how to braid my hair. We were inseparable, and he’s the only parent I’ve ever known.

That’s the thing about abusers. They’re not three-headed monsters that live under the bridge or in a cabin in the woods. They’re often your best friend, the guy you play pick-up basketball with, the person in the cubicle next to you. For Attiya, it was a boyfriend she lived with and went to school with. In every aspect of her life, he was her constant, just like my father was for me.

My father is still in my life, although now I have control over the relationship. I have the upper hand. But sometimes I don’t. I’ve sat and listened to him on the phone as he’s told me that I destroyed his life and that he should have killed me when he had the chance. So I pull back. Months pass, and then a relative will call me from overseas. She’ll want to know why I’m not helping him, tell me that I need to let the past go. I have confronted my father:  he says it wasn’t so bad. At least he didn’t sexually abuse me, he says, and besides, he slapped me only once.

There’s a moment in A Better Man when Attiya is moved to tears after Steve admits to the abuse. She says she sometimes wondered whether things had actually happened the way she remembered — she’s been told so often that they didn’t. His confirmation seemed to physically lift some pressure off of her.

And that’s the beauty of this film: the abuser’s acknowledgment of his actions and of the survivor’s pain seems to offer a resolution of sorts.

A few years ago, after the revelations of Jian Ghomeshi’s abuse and the victim-blaming that ensued, former Toronto Star reporter Antonia Zerbisias and friend Sue Montgomery, a justice reporter at the Montreal Gazette, created the hashtag #BeenRapedNeverReported and shared their own stories of sexual assault. Within 24 hours, some 8 million people from around the globe had shared their own personal stories.

One woman sent Ali a direct message in which she asked him to share her story of assault without revealing her identity. Ali has since received thousands of stories. In a tweet he posted on November 11, he wrote: 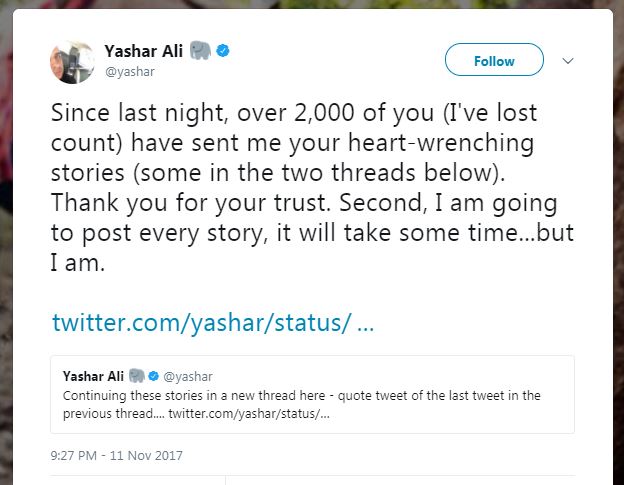 “Since last night, over 2,000 of you (I've lost count) have sent me your heart-wrenching stories (some in the two threads below). Thank you for your trust. Second, I am going to post every story, it will take some time...but I am.”

I scrolled through some of the tweets. Many people had never told anyone about their assault; many were worried about what others would think. Many had been abused by family members. Although few identified themselves, it’s clear they wanted their experiences to be acknowledged: the responses from Ali’s followers — offers of support and care, assurances that it hadn’t been their fault and that, yes, we believe you — did just that.

As for myself, I have come to terms with the fact that it is unlikely that my father will offer me that sort of peace. So why talk about this?

In an interview with the Guardian, Attiya Khan said:

“During the making of the film I started to heal. Every time I would sit down with Steve, I would feel some of my pain, decades of pain stored in my body being lifted. I felt this change even when Steve did not say or remember much. This has affected my life in major ways. I don’t have nightmares any more. I feel safer leaving the house. When I’m out, I’m not always expecting to be hurt by him or others. I don’t spend as much time thinking about potential dangerous situations and how I would get out of them. I feel more relaxed and am enjoying life more.”

Attiya was responding to the question “How did making the film affect your PTSD?” For years, I thought that there was no point in talking about what happened in my father’s house. Life went on. I graduated from high school and went to university. I saw my father on and off at family functions. I edited myself to fit into this new relationship; I didn’t rock the boat by confronting my extended family. But lately, it’s been on my mind. I don’t know if it’s because I now have kids or because my trauma is finally showing up in the anxiety I am now experiencing on a near daily basis — but I crave peace.

I look at my father’s life. He’s lost most of his friends. He lives in a rooming house. He was recently diagnosed with PTSD, probably from his time living and raising children in Uganda during the civil war of the 1980s. I don’t take any satisfaction in seeing my father struggle. In a way, knowing that this father who hurt me is not the dad who did everything to get his family out of a refugee camp and safely to Canada provides some kind of resolution.

And that’s what A Better Man seems to offer: a form of justice. Still, not many of us will have the opportunity — a strange word to use in this situation — to sit down with our abuser so they can offer us what we’re in search of. Perhaps that’s what social media offers: a space to unburden ourselves without fear of being silenced and dismissed. A place to learn how to breathe again.

ANALYSIS: The TTC helps Toronto’s economy more than you might think. And remote work could undo those benefits.

Coronavirus
The State of COVID-19 in Jails