‘It leads to mistrust’: Experts weigh in on Ontario’s COVID-19 communications

ANALYSIS: Confusing. Contradictory. Convoluted. Communications and public-health experts say that the Tories’ strategies have largely been a failure — but that there’s a chance to change course
By Fatima Syed - Published on Jan 19, 2021
Chief Medical Officer of Health David WIlliams listens as Premier Doug Ford speaks at Queen’s Park on May 29, 2020. (Frank Gunn/CP)

Within hours of releasing Ontario’s latest stay-at-home order last week, the government announced and then reversed and then recommitted to a provincial residential-eviction ban.

That was just the start of the confusion that surrounded Queen’s Park’s newest COVID-19 policy, the fourth it’s released since the pandemic began in March.

There are 29 exemptions to the stay-at-home order, which was announced on January 12 — a spokesperson for the Ontario Association of Chiefs of Police told the Toronto Star that “there’s way more questions than we have answers at this time.” In a “frequently asked questions” document released a day later, the government states twice that it “cannot determine what is essential”; “We’re asking Ontarians to use their best judgement” also appears twice.

Days later, mayors across the province continue to clarify that skating rinks and ski hills are open, despite the fact that everyone has been asked to stay at home.

“Overcommunication has actually failed the government,” says Kate Harrison, a Conservative activist and vice-chair of Summa Strategies, an Ottawa-based public-relations firm. “The frequency of communication at the outset of the pandemic made sense. The further we got into it, the more it became white noise. It doesn’t feel different any more — just a lot of background noise.”

To recap: Ontario’s first state of emergency, in March 2020, saw the government shut schools but allow March break to continue as usual. In the weeks that followed, parks were closed to prevent the kind of gathering seen at Toronto’s Trinity Bellwoods. The cherry blossoms at High Park were fenced off. A month later, the government released a framework for reopening the province, creating three stages to identify the severity of the spread regionally. The province added “modified stage 2” to the classification system.

Ontario’s pandemic response in fall 2020 had six pillars and a traffic-light colour-coded classification system. The latter was an amended version of what local medical officers had approved, so a new one was released. Then grey was added to the colour-coded system to indicate something more severe than red. In a press conference, David Williams, the chief medical officer of health, referred to a “darker shade of grey” when providing justification for moving the province into a lockdown after Boxing Day. The colour system was later abandoned in favour of the present stay-at-home order.

Ivana Yelich, a spokesperson for Premier Doug Ford, dismisses concerns that the government’s communications have been confusing. The government’s “experience with the first wave makes clear that Ontarians had no trouble understanding what every-day actions were necessary,” she told TVO.org via email. “Premier Ford couldn’t have been more clear with Ontarians last week when he announced the stay-at-home order: stay home to stop the spread of COVID-19.”

However, health experts say that the rapidity with which the restrictions have changed means the public hasn’t been able to absorb what exactly needs to be done to end the pandemic — especially as Queen’s Park has been making blanket statements regarding everyone in the province, despite the fact that some regions have few to no cases.

Samanta Krishnapillai, founder of the OnCOVID19 project, which relays pandemic-related information to young people on Instagram, says what’s confusing is that “the government couldn’t highlight the difference between a former plan and a new one in plain language or explain why the change is so important.”

“An explanation would give people more confidence,” Krishnapillai says. “I’d have more confidence if the government plainsplained their policies instead of expecting us to know the background and have an understanding of so many new terms and concepts that most have never grappled with. To not explain the changes is a major communication fault.”

Farah Mawani, a social and psychiatric epidemiologist with the hospital network Unity Health Toronto, says that the government would have benefitted from not just releasing a policy but also communicating “what can prevent us from moving in the more dangerous stages of the plan — how can we stay in Stage 1, assuming we can.”

Naheed Dosani, a palliative physician and health-justice activist, agrees: “When you use complicated systems, it leads to mistrust.”

Mistrust has existed to some degree since the beginning of the pandemic, according to Andrew Brander, a former federal and provincial Conservative staffer and consultant with Crestview Strategy. The “havoc” of early policy decisions — as the government tried to understand the pandemic — and subsequent reversals created confusion that has remained throughout, he says: “First impressions last in an emergency situation. Consistency is rule number one of good communication, but the nature of the virus and the science behind it have not afforded the government an opportunity to be consistent.”

Greg MacEachern, senior vice-president of Proof Strategies and a former Liberal strategist, believes that the Ontario government lost its credibility with the latest stay-at-home order and notes that the announcement came after Ford and several cabinet ministers had mentioned that they’d been working hard over the weekend. “When you tell us how hard you’re working on this, we expect to see a document that is clear and easy to understand,” he says. “Which we didn’t get.”

If there’s been a silver lining to the confusing nature of Ontario’s COVID-19 communications, it’s Ford himself, Brander says, adding that the premier has put himself “at the centre of decision-making and accountability.” Harrison believes Ford has been “authentic,” leaving no doubt that “he doesn’t relish these decisions.” MacEachern says that Ford has been “quick to respond.” Krishnapillai says he was even “comforting” in the onset.

“Politicians have a much harder time in an emergency because they don’t want to deliver bad news,” says Penny Collenette, a former political official in Jean Chrétien’s Liberal government. “But it seems to me that the premier is trying to find himself in this whole terrible, awful pandemic. At first, it worked, because he was direct and forthright.”

But Ford’s personality is no longer enough, Collenette says.

Krishnapillai says she is concerned that the government is using language that should translate into real action but doesn’t. For example, Ford has repeatedly used such phrases as “the system is on the brink of collapse” or “we’re in a crisis” or “we have a plan for every scenario.”

“If you’re saying things are that bad, then your action has to match,” Krishnapillai says. “My frustration is that the government speaks about a crisis but doesn’t follow through with equal action, and it’s been too long for them to say they’re not sure or they don’t know what’s going on.”

There is an opportunity for the government to course-correct on the way it is communicating with the public about the pandemic, Dosani says: in order to be more effective, the government needs become more innovative and turn to experts in marketing, psychology, and human behaviour. He cites Alberta’s “Mr. Covid” ad as an example of “the kind of hype and buzz we need to help people understand what they need to do.”

Mawani says the government could also choose to adopt a community-based and trauma-informed approach. That could mean doing more consultations with community leaders to keep the message in line with the reality on the ground — and communicating in a way that “recognizes that we are experiencing a collective trauma.” 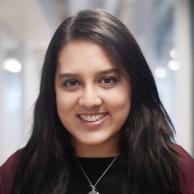 Fatima Syed
Description
Fatima Syed is a Toronto-based freelance journalist who has reported for the Toronto Star, the National Observer, and the Logic.
Follow @@fatimabsyed

Coronavirus
COVID-19: What you need to know for January 24
TVO.org staff