Is Wynne the target of sexism and homophobia? Turns out many readers aren’t keen on the question

Well, I did ask for it. And sure enough, I got it.

In my last column, I put a big target on my back by asking whether any of Premier Kathleen Wynne’s historically low approval ratings could be attributed to the fact that she’s female and openly gay.

The reaction was fascinating. And there was a ton of it — much more than usual for my weekly offerings. Clearly, the piece set off a debate among those who believe that, yes, some of Wynne’s unpopularity is based in misogyny and homophobia, while others insist, no, those aren’t factors at all, it’s simply poor policy choices, bad management, multiple police investigations, and a government overstaying its welcome.

Some felt Wynne’s massive tumble in the polls had more to do with betrayal than anything else. They had high hopes that she would be a different kind of politician, and when they decided she wasn’t, the fall from grace was doubly harsh.

Take one issue, for example: government spending. Wynne has found herself boxed in on both sides. Her progressive friends are furious with her because they think she’s starved hospitals and schools of adequate funding. This was one tweet which spoke to that: “You're right about sexism and homophobia. But for me, it's the fact that people on ODSP (Ontario Disability Support Program) are worse off today than even under (Premier Mike) Harris.”

Her allies were also mortified when she preached municipal responsibility and accountability, then intervened and cancelled Toronto’s attempt to put tolls on the Gardiner Expressway and Don Valley Parkway.

Others attribute her low popularity to a tone she brings to the job. “The response from the Wynne government was always condescending,” a guy named Dan responded on Twitter. “People resented the attitude.” Ted Nesbitt added: “it's not sexism, it's not Homophobia. It is her ‘school marm’ approach to all of us, the ‘I know what you need.’”

Even Liberals acknowledge that Wynne, as a believer in the power of government to do good, intervenes too often on too many issues because she simply wants to solve every problem out there.

That’s true, but Wynne personally, and the Liberal government in general, are at historically low levels of popularity. Does fatigue alone explain that? After all, the Liberals’ 14 years in power pale in comparison to the Tories' 42 straight years in office (1943–85), and never did those governments sink so low in the polls.

Kevin Ashe, whose father, George, was a PC cabinet minister more than three decades ago, suggested:

There were also a number of women who rejected the suggestion that sexism or homophobia were at play. “Are there people out there who won't vote for her because she's a gay, woman? Of course,” tweeted Jacqui Delaney, who works for a Conservative senator in Ottawa. “But they were there when she won a majority too."

And someone named “Katie” tweeted: “Stop accusing ppl of sexism every time a female candidate doesn't win, or does but isn't liked. Most people judge their performance.”

But others were pleased that we published the piece. Ken MacKinnon, a doctoral student at the Ontario Institute for Studies in Education, suggested it was “A question which needs to be asked.” Similarly, Leanne Foster, Head of the Trafalgar Castle School in Whitby, tweeted: 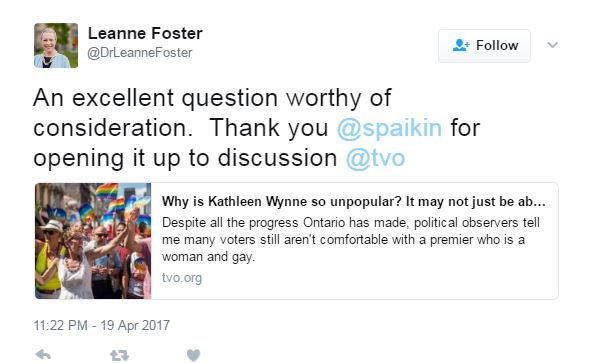 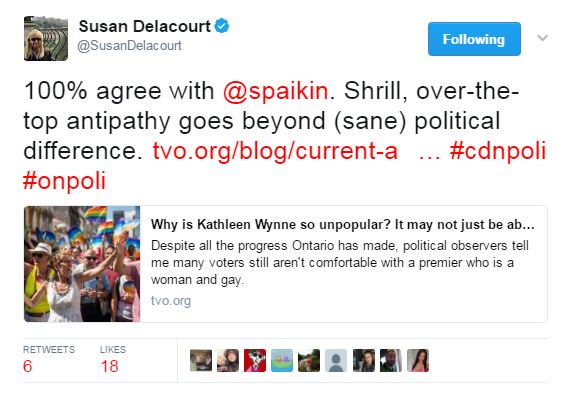 “Yes... You're not off-base at all Steve. You're on point,” echoed National Post columnist Ashley Csanady.

Others pointed out they’d never seen a male politician attacked in the same manner, buttressing the argument that female politicians are judged more harshly than male ones. Trevor Morgan tweeted: “Thanks for writing this. I've been genuinely confused by the level of vitriol directed at her.”

“Even if this isn't the whole story, it's definitely a component. Sexism & homophobia abound, but we pretend it's something else,” suggested Shawna Lewkowitz.  And Patrick D. Whelan tweeted that:

One long-time female Conservative emailed me the following: “You are asking the right questions. (Former Liberal leader) Lyn McLeod, (former prime minister) Kim Campbell, (former Alberta premier) Alison Redford. See if there are any male leaders with worse poll numbers at the end of their tenure. I suspect not.”

This isn't just anecdotal: one Liberal MPP I spoke with told me he had seen internal party polling which showed significant numbers of Ontarians acknowledge some discomfort being led by a female, openly gay premier.

What emerged from the responses was also a pretty clear gender gap. Obviously, not all women sympathize with Wynne, just as not all men are prepared to castigate her. But someone on Twitter named “alt_splicing” did point out that “All the people saying no there are no other reasons seem to be men. As a queer woman, ofc sexism and homophobia play a role. NO SHIT.”

There were some notable exceptions. Andrew Tumilty, a communications consultant, offered: “An objective look at other leaders makes it hard to say homophobia & misogyny are not factors.” And regarding much of the filth on social media written about Wynne, Tumilty added: “If you think @spaikin is wrong, tell me how often abuse thrown at McGuinty mentioned he was a straight man?”

Margaret Harvey added another element, namely the role that media itself may play in reflecting biased attitudes:

Also running through some responses was a sense that the very thesis that homophobia and/or sexism are at work is taboo: “THANK YOU for saying the unsayable,” tweeted a York University PhD student named Kallee. While it might have made some people uncomfortable, the issue is important, and we’ll continue to explore it as the 25th premier’s administration counts down to the June 7, 2018, election day.

Photo courtesy of Premier of Ontario Photography and licensed for commercial use under a Creative Commons licence. (See the uncropped version.)

Politics
What’s ON: The week that was in Ontario politics (November 29-December 3)
Daniel Kitts

Coronavirus
COVID-19: What you need to know for December 3
TVO.org staff