In Brant County, the Nixon Way is more than just a road

By Steve Paikin - Published on May 16, 2018
Between him, his father and his daughter, Bob Nixon’s family has served the people of Brant for more than 80 years. (Steve Paikin)

In the United States, it’s one of the most notorious last names in political history.

But in Ontario, it’s just the opposite.

Robert “Bob” Nixon heads up one of the most remarkable political families in this province’s history. The 89-year-old has finally received some much-deserved recognition.

Nixon led his political party, the Liberals, on four separate occasions: twice having been chosen at a leadership convention, and two more times having been interim leader. 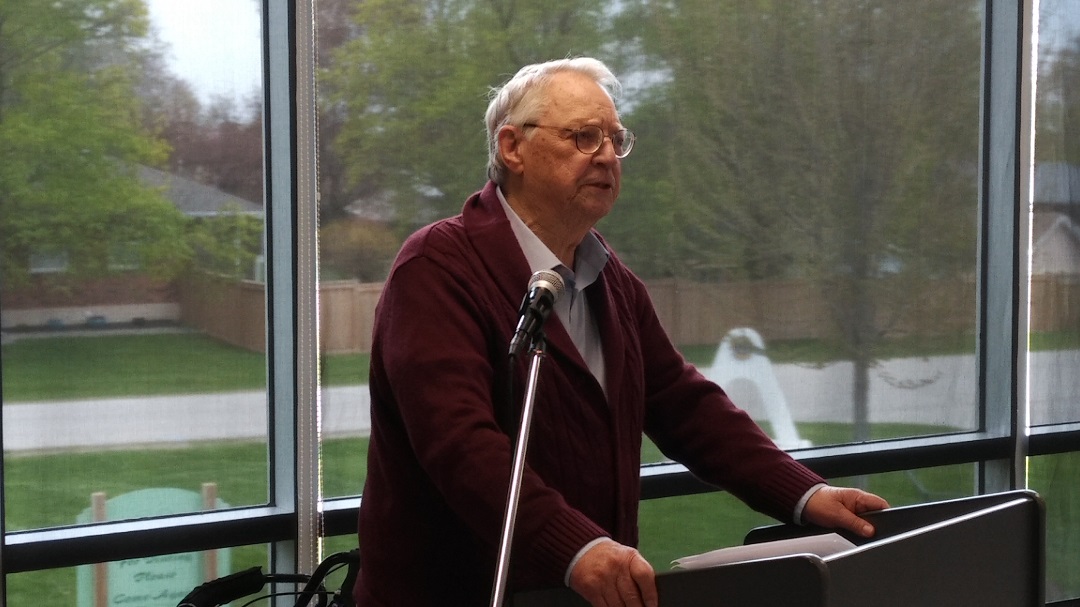 The Nixon family has been a fixture in Brant county, just west of Hamilton, since Bob’s great-grandfather Charles moved the family there from Grimsby in 1850. Charles was originally from New Jersey, but his family were United Empire Loyalists and left after the American Revolution.

“They picked the wrong side,” Bob now quips. “It’s been known to happen since.”

Disease killed Charles Nixon’s young wife and two children, leaving him alone and devastated. It would not be the last time the Nixon family would experience tragedy.

Charles remarried and built “Woodview,” the stone house and farm operation still on Number 5 Highway in the village of St. George. Charles’s grandson Harry entered politics in 1919, becoming provincial secretary in the United Farmers of Ontario government. He was also in Liberal premier Mitchell Hepburn’s government and briefly served as Premier of Ontario in 1943 — he would be the last Liberal premier before the Progressive Conservatives began their 42-year-long dynasty.

“I think my dad knew the end of liberalism was very much coming,” Bob Nixon recalls. “Something like that couldn’t happen again, could it?” he asks facetiously, well aware of what today’s polls are suggesting.

Harry Nixon represented Brant in the Ontario legislature for more than 42 years; he died of a heart attack while still an MPP in 1961. His son Bob succeeded him in the ensuing byelection and proceeded to win nine more elections before retiring from politics to become Ontario’s agent-general in the United Kingdom in 1992.

“My dad and I represented the area continuously for over 70 years,” Nixon says.

But the story doesn’t end there. Nixon’s daughter, Jane Stewart, entered federal politics in 1993 and served in Jean Chretien’s government for more than a decade; she was a cabinet minister for seven of those years. Jane's son Bobby, his wife Laura, and their son Nixon live in Woodview. Nixon Stewart represents the seventh generation from that family to live in the storied home.

“He may have trouble with that name when he goes to school,” Bob Nixon jokes. 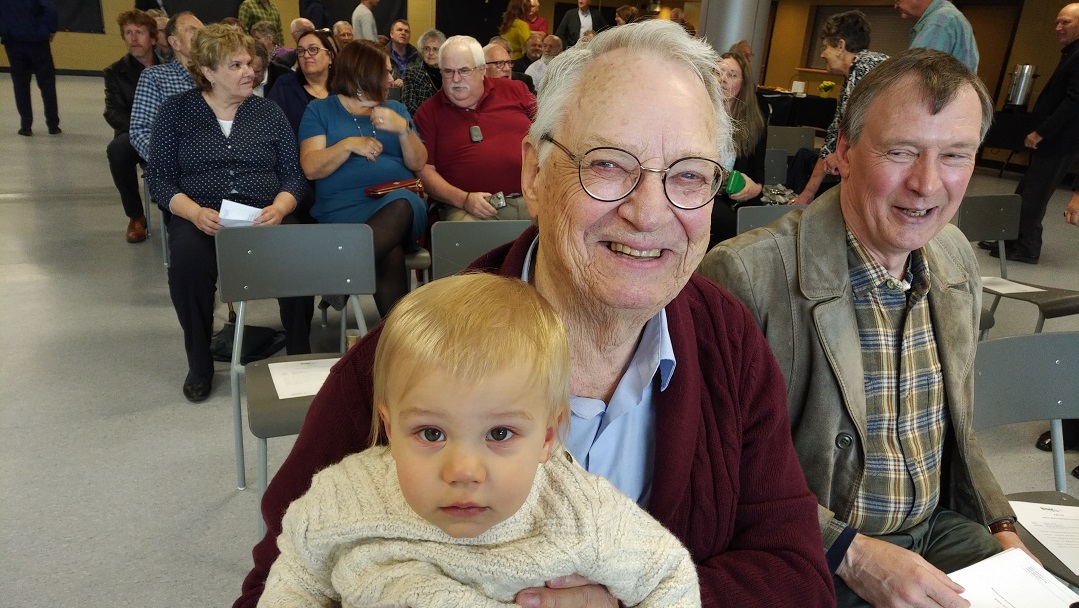 Given the family’s prominence in Brant county, I once asked Bob Nixon whether there was anything named after him in the area.

Maybe Nixon didn’t care, but I did. The lack of recognition offended the nerdy Ontario history buff in me. So I mentioned to the then-speaker of the legislature, Dave Levac (who served almost two decades representing the same Brant riding until his retirement this spring), that surely the county should do something to acknowledge the Nixon family’s service. Levac agreed and took the idea to councillor John Wheat, who set the wheels in motion and made it happen.

That’s why last week, more than 100 people gathered in St. George’s arena to pay tribute to Nixon and his family by renaming the stretch of Number 5 Highway in front of Woodview “Nixon Way.” It has a wonderful double meaning: it not only describes a road, but also the no-nonsense way Bob Nixon practised politics and the unusual turns his career in public life took. 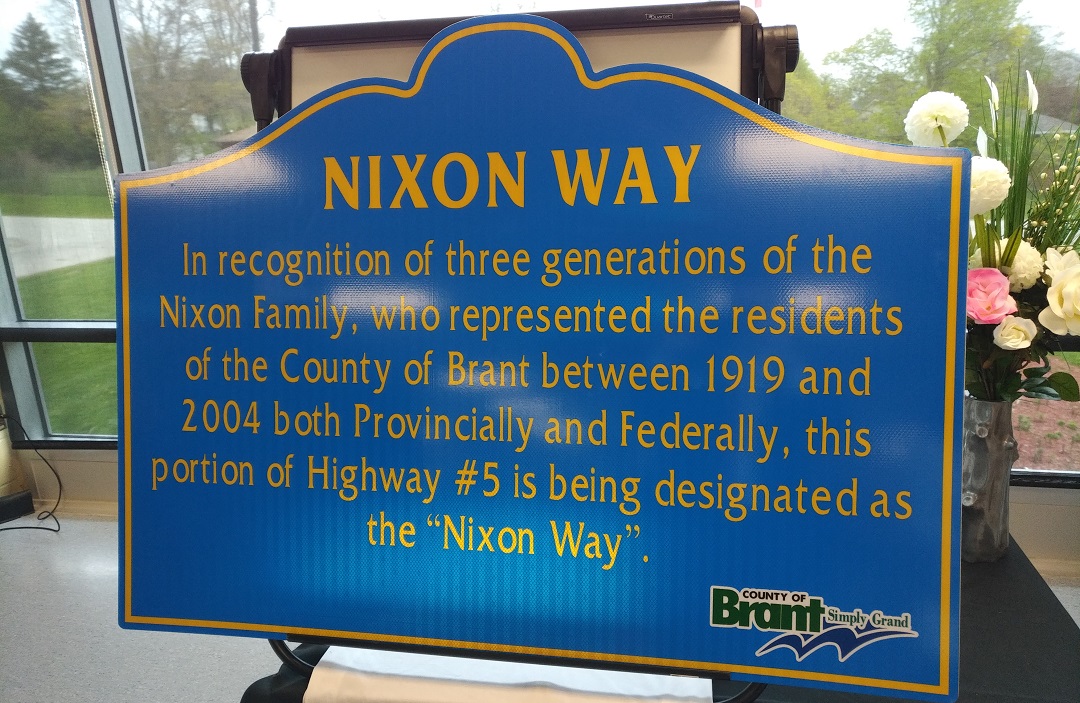 Nixon gave a great speech, one that was alternately funny and touching. One of the more solemn moments of the ceremony came when Nixon recalled “the most important member of the family.” He was referring to his older brother Jackson, an RCAF pilot during World War II, who was shot down and killed after returning from a raid over Germany in September 1941.

“I was in the barn,” Nixon recalled. “I remember the door opening and my mother coming in, in tears. She’d had a visit from the station agent at the CNR train station. He got the telegram about my brother’s being killed in action. It was a horrible time, but it was also happening in many homes.”

When he was at Queen’s Park, Bob Nixon was admired by everyone at the legislature. But his political career, frankly, was marred by bad timing. The teacher and farmer was made Ontario Liberal leader in January 1967, at the age of 38; less than a year later, Nixon found himself facing off against a very popular premier in John Robarts. He didn’t stand a chance, and Robarts renewed the PC majority government. Four years later, Robarts was gone, but Bill Davis’s Big Blue Machine proved unbeatable as well.

Nixon fell on his sword and stepped down as leader. But the Davis government quickly became unpopular, and many in the Liberal grassroots wanted Nixon back as leader. And so, he successfully ran in October 1973 to succeed himself as Liberal party chief.

But the hard-luck Nixon still couldn’t catch a break. In the ensuing 1975 election, he came within two points of Davis’s Tories, got 5 per cent more of the total vote than the NDP, and yet, because of an inefficient vote, came third in the seat count. Stephen Lewis became leader of the opposition, and Nixon resigned as Liberal leader yet again.

But Nixon stuck around as the MPP for Brant County and, after 23 years in opposition, finally got a taste of life on the government benches.

After the Tory dynasty ended in 1985, Premier David Peterson made Nixon his treasurer (finance minister) and deputy premier. There was a certain political poetic justice to seeing the son of the last Liberal premier before Peterson sworn in on a gorgeous summer day in front of the legislature. Of course, his time on the government benches turned out to be shorter than most figured it would be, as Bob Rae’s New Democrats upset the Liberals in the 1990 election.

The years have caught up with Nixon. He now uses a walker to get around because his eyesight isn’t good. But he is still sharp as hell, regularly seeing visitors at his seniors’ residence in Paris, Ontario, who are delighted to gossip with him about the events of the day or share some old political war stories.

It is, after all, the Nixon way.

Society
How one Ontario city is tackling homelessness and the opioid crisis
Barrie consistently reports higher opioid death rates than both the region and the province as a whole — so it’s bringing the business social-service communities together to support marginalized people downtown.
Kelsey Rolfe
Politics
What American Expats Think About U.S. Politics
Society
Is Poker a Metaphor for Life?