If entrepreneurs want to combat food insecurity, they need to get their hands dirty

At 2 p.m. on November 4, it’s pencils down. After two days of research, planning, and prototype testing, the ShareON Design Jam has reached the final pitching stage.

Design students, tech entrepreneurs, engineers, and assorted creative types, clustered in groups of four or five, queue up to present their ideas to combat food waste and food insecurity in Ontario. Competing for a top prize of $6,000, six months of free co-working space, and mentorship through PwC Canada, the presenters at Ryerson University’s Student Learning Centre start rehearsing. The air fills with whispered jargon: 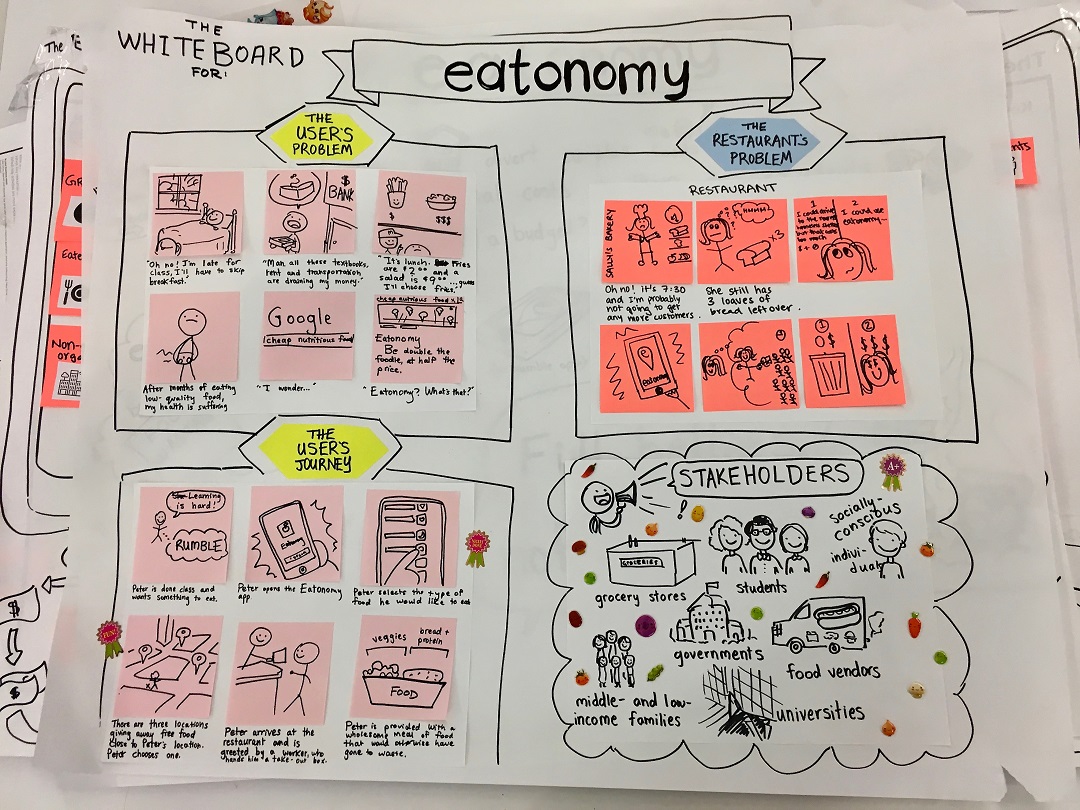 Most of the presentations begin with a statement about the scourge of food waste (about $31 billion worth of food is wasted each year in Canada). Nearly half focus on some version of meal sharing — apps that facilitate the exchange of prepared meals, co-shopping to take group advantage of sale prices, digital catalogues of fridges and pantries that enable a user to locate a neighbour who has two eggs to trade for a cup of sugar. One group boldly proposes to digitally pair millennial condo dwellers with seniors to cook dinner together.

Although the groups were instructed to keep their ideas within the bounds of existing regulatory frameworks, none of the presenters mentions public health codes or liability concerns. Only one team makes a nod toward government policy, proposing a tax rebate for users.

Kim, who owns a handful of trendy restaurants in downtown Toronto, is the most persistent inquisitor of the five judges. He asks each of the 16 groups some version of, “Have you ever met a poor person?” Over the course of two hours, Kim, who grew up poor and stole food to survive, hammers the presenters with challenging questions and observations:

Some take it as a learning opportunity. Some tell Kim his observations are wrong. Some offer the diplomatic answer: “That’s something that’s still in development.” The smart ones say, “Thank you for that question. That’s one of the things that separates us from our competitors.”

In the end, says Kim, “the ones I got rid of were the ones that perpetuated a welfare system.” One pitch, for example, called for charitable meal-sharing within a mixed-income community. Asked about the stigma of accepting charity, the group members conceded they hadn’t considered it.

Once all the presentations are through and the judges have deliberated, the winner is announced: Tagface, an app that tackles supermarkets’ inventory system challenges. When users scan foods in-store, the app reminds them what already they have in their fridges or pantries at home and details the environmental impact of the products scanned. It makes money by tracking users’ behaviour and selling that data to the store.

It wouldn’t be fair to dismiss any of these ideas on the basis of a five-minute presentation. But apart from one group that went to a supermarket and spoke with a manager about food waste, none of the teams seemed to have any first-hand knowledge of the problem they were trying to solve. Each one quoted the same stats on food waste and the same experts who believe the solution is better inventory management.

I’ve been to Ontario farms and spoken with farmers and migrant labourers. Their primary concern is getting a fair price, not collecting consumer data. I’ve been inside the Second Harvest warehouse, where the 9 million pounds of food they redistribute every year moves like clockwork. They don’t need help with logistics. I’ve cooked for the homeless in kitchens supplied by Second Harvest. Staff there are wizards at transforming borderline edible ingredients — unsellable beef stickered with “40% off” labels, cases of half-rotten eggplant — into proper meals. But their clients are poor, often homeless, and suffer from mental illness and/or drug addiction, and services to help them are underfunded. Gamifying an app will not address their food insecurity.

And I’ve seen food, tonnes of it, left to rot at the Ontario Food Terminal because better produce arrived before the previous batch could be sold — and it’s more work to redirect it into needy hands than it is to simply throw it out.

Statistically, many of the participants at the ShareON Design Jam must have some experience with poverty and hunger, but it didn’t show up in their ideas. Though brilliant in their own areas, these leaders of tomorrow need to get their hands dirty — by spending time in the places where food is wasted or redistributed, by speaking to the people there about their biggest challenges are — if they really want to understand the problems they’re trying to solve.

Food
It’s time to abolish tipping once and for all
OPINION: With restaurants generating a quarter of their usual revenue during COVID-19, a subminimum wage subsidized by tips just doesn’t make sense for workers.
Corey Mintz