The swearing-in of Premier Doug Ford and his cabinet as the new government of Ontario on June 29 marks a transition of power to the Progressive Conservatives after a long Liberal run in office. But however excited the new premier’s supporters may be, their celebrations will probably seem subdued compared with those that surrounded the swearing in of one of Ford’s Tory predecessors. When James Pliny Whitney took the oath on February 8, 1905, becoming the province’s sixth premier, his supporters publicly rejoiced, revelling in the opportunity to mark the end of 34 years of Liberal rule.

The lobby of the Queen’s Hotel (currently the site of the Royal York Hotel in downtown Toronto) buzzed with reporters and political junkies that morning. They watched as one MPP after another visited Whitney’s room — the final cuts to the new cabinet were being made. “Mr. Whitney was here and there about the rotunda, acknowledging a congratulation here, welcoming a colleague there, and in every way filling the part of a dignified but affable gentleman,” the Toronto Daily Star reported.

After breakfast, Whitney met with J. Lonsdale Capreol, the clerk of the executive council, to discuss the details of the swearing-in ceremony, including the oaths that would be taken by each new cabinet minister. Following a quick noontime visit to Lieutenant-Governor William Mortimer Clark at Government House (the official residence of the lieutenant-governor, which was located in the King Street block currently occupied by Roy Thomson Hall and Metro Hall), Whitney returned to the hotel. After indicating that Clark had approved his choices, he read off the list.

The 10 men selected were an attempt to reflect the province’s diversity. Each region was represented, with the temporary exception of northern Ontario, as Whitney’s preferred choice, Sudbury hardware merchant Frank Cochrane, was recovering from a freak train accident that had cost him a leg the previous week. Two Roman Catholics were included to demonstrate that religious tensions over education were a thing of the past. Minister of Public Works Joseph Reaume (Essex North) became the first Franco-Ontarian to serve in cabinet. Among the others chosen was Adam Beck (minister without portfolio, London), who soon established the Hydro-Electric Power Commission of Ontario, which evolved into Ontario Hydro. 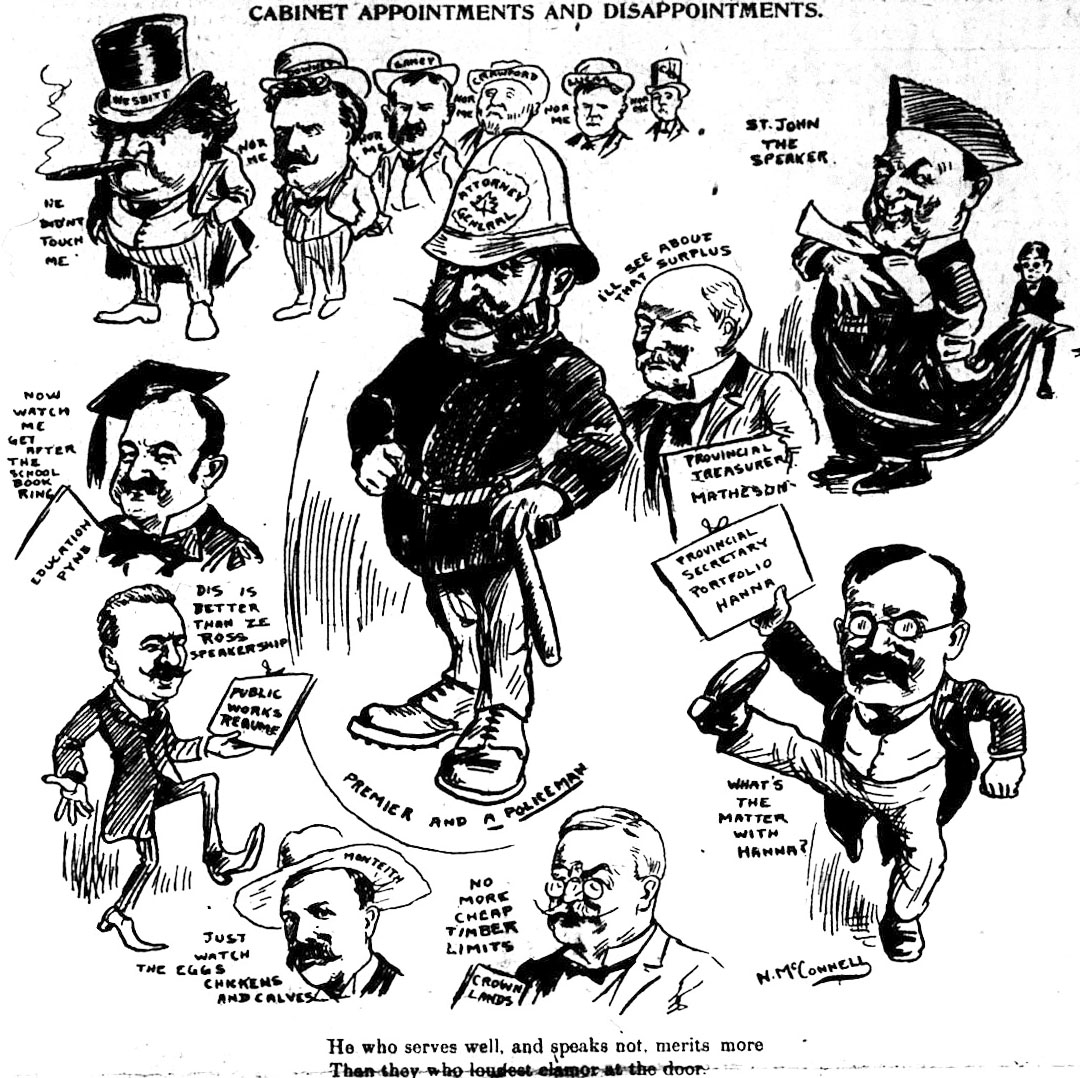 The swearing-in ceremony began at Government House at 4:30 p.m. The Mail and Empire observed that it was “as brief as it was simple.” Capreol administered the oaths: each minister swore that he would “be faithful and bear true allegiance to his majesty King Edward VII.”

Across the city, Conservative supporters prepared to party. They had been in a good mood since the January 25 election, when the Tories had won 69 of 98 seats after campaigning against Liberal corruption. “Since Confederation,” Whitney biographer Charles W. Humphries observed, “provincial Conservatives had never really had occasion for uninhibited jubilation.”  Around 8 p.m. a torchlight procession, which swelled to roughly 3,000 people, departed from the Queen’s Hotel and headed to Massey Hall, where a rally was planned in honour of the new cabinet. The parade included members of Conservative Party associations from each ward in the city, military bands, and carriages containing prominent Torontonians and the evening’s honorees. Roman candles were launched along the route, and a full fireworks display was given outside the Mail and Empire office at King and Bay streets. “Blazing sparks fell on the hats and shoulders of the packed crowds,” the Mail and Empire observed, “but nobody minded them any more than they minded the driving snow.” Passengers hopped off blocked streetcars along Yonge Street to join the procession.

Over at Massey Hall, the galleries filled quickly after the doors opened at 7 p.m., as attendees were eager to escape the snow and wind. The venue was decorated with Union Jacks and a portrait of Whitney; a banner with the words “Welcome to Our Leader” hung above the platform. The parade arrived around 8:30 and, according to the Globe, “thereafter cheering, singing, and the enunciation of college yells by several parties of students filled the interval preceding the arrival of the guest of the evening.” Conservative Party official and future Toronto mayor George Reginald Geary gave an opening address, then Whitney received a standing ovation. Holding a bouquet of crimson carnations that had been given to him when he rose, the premier spoke for just over 15 minutes. He praised the Liberals for the work they’d done during their long run in office and warned that any party would grow stagnant if it stayed in power for too long. He also promised to continue rooting out government corruption. But mostly, Whitney thanked the audience for its support. “Let me thank you, utterly impossible as it is for me to feebly even express my own individual sense of what I am and of what you have done for me,” Whitney said. “Let me again repeat these simple words: ‘I thank you heartily.’” The other cabinet members, with the exception of one who was absent, gave similar speeches. 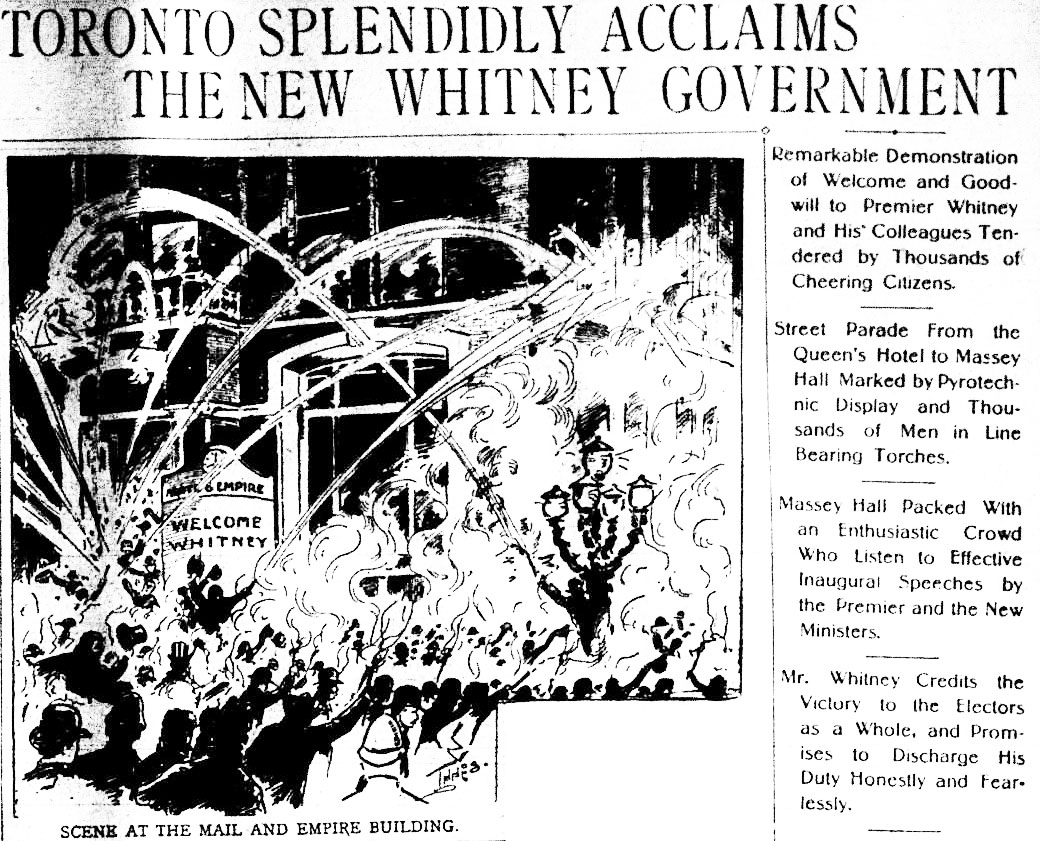 Press from across the political spectrum responded favourably to the parade and rally. The Liberal-leaning Toronto Daily Star called the festivities “a fitting tribute to the men who have risen victorious after so many years of fighting, and who have now been entrusted with the affairs of this Province.” An editorial in the moderately Conservative Toronto World noted that “if there were any bitter hearts among those who have lived in the belief that one party had been irrevocably destined to the fleshpots of office and the other to the barren land of popular disfavour, they had last night a valuable chance of learning the uses of adversity.” The hard-core Conservative Mail and Empire claimed that the evening “marked the climax of a long and constant fight for the safeguarding of the rights and liberties of the British system of responsible government” following the scandals of the last Liberal administration.

Whitney would win three more provincial elections before dying in office three months after the 1914 campaign. The Conservatives, for their part, remained in power until the election of 1919, when they suffered a stinging and unexpected defeat at the hands of the United Farmers of Ontario.