In labs across the province, cutting-edge work is being done to develop new ways of testing for — and containing — the novel coronavirus
By Nick Dunne - Published on Apr 16, 2020
Current testing for COVID-19 is a time-consuming process that requires skilled and qualified technicians to generate accurate lab results. (iStock.com/Bill Oxford)

In March, the Canadian government announced close to $27 million for COVID-19 research. This inaugural round of funding was distributed to researchers across the country who are investigating everything from vaccines and antivirals to methods of tracking the virus’s spread. Some 21 of the first 47 projects funded are based in Ontario, accounting for more than $10 million.

TVO.org caught up with three research leads in the province to discuss their roles in the fight against the coronavirus — and what discoveries and innovations could be on the horizon.

Current testing for COVID-19 is a time-consuming process that requires skilled and qualified technicians to generate accurate lab results. The necessary equipment, such as swabs and lab reagents — the chemical components that react to the substance being tested — is in high demand. As a result, public-health officials are prioritizing testing for those who are symptomatic, have travelled internationally, or have been in close contact with COVID-19 patients. This means that asymptomatic carriers of the virus could unwittingly spread it.

Supported by $398,000 in federal funding, Maxim Berezovski, a University of Ottawa chemistry professor, and his team are designing an easy-to-manufacture diagnostic that would provide a positive or negative test result within five to 10 minutes at a 90 per cent accuracy rate. It would use a strip of highly sensitive paper to detect the virus. Berezovski says that similar tests exist for norovirus, Coxiella virus, and smallpox. He adds that this diagnostic could be mass-produced at a cost of around $1 per test and distributed to airports, hospitals, and other essential locations. “Our test is supposed to be really simple, so everyone can use it,” he says.

The diagnostic would serve mainly as a preliminary screening measure to minimize wait times at hospitals and assessment centres and free up labs to confirm initial positive test results. “If people feel sick, they are of course worried if it is COVID or just a regular flu,” he says. “It will eliminate waiting in line at the hospital, because if you know the results, you don't need to go to the hospital if the result is negative.” It would not replace standard testing methods. “Of course,” Berezovski says, “we don't replace the PCR [polymerise chain reaction] test, because that one gives you, like, 99 per cent accurate results.”

Testing labs require specific equipment, staff, and resources for COVID-19 diagnostics, which means that the process is centralized and prone to delays. That’s why a team led by Keith Pardee, an assistant professor at the University of Toronto’s Leslie Dan Faculty of Pharmacy, is trying to redesign mobile assessment centres, which were initially used for the Zika virus. It aims to create a “lab-in-a-box” that would allow public-health units in both concentrated and remote locations to assess patients for the novel coronavirus.

The product is about the size of “two or three moving boxes,” according to Pardee, whose team received $1 million in funding. When set up, it will contain 14,000 tests and a device that can read up to 384 samples at once. The test accuracy is comparable to the standard real-time PCR method.

Mobile assessment centres could be useful for rural and remote communities, particularly First Nations and Inuit communities, where assessment supplies and infrastructure are limited. And localized testing could help limit community spread through early detection. “It has the potential to augment the centralized testing that's going on,” says Pardee. “It has the potential to decentralize that testing, too.”

Like Berezovski’s rapid diagnostic test, Pardee’s is easier to manufacture and uses different reagents than current testing. “The advantage there is that these tests can be made basically from some very simple low-cost inputs in a microbiology lab,” he says. “And so any potential supply chain disruption can be avoided.” Future plans involve converting standard microbiology labs into facilities that can test for COVID-19.

Data and modelling can help researchers assess and predict the impact of the virus and understand where and how its spreads. Taiwan and South Korea were early adopters of the use of mobility data — including plane departures and cellular and personal GPS data — to retrace a patient’s movements and track those who’d come in close contact with them.

Isaac Bogoch, a clinician investigator with the University Health Network’s Toronto General Hospital Research Institute, had been researching the spread of COVID-19 before most scientists had ever heard of it. “We were following this since December,” he says. “We didn't even know it was a coronavirus during the course of some of this work.” Using data and flight patterns, Bogoch was able to model where the virus was most likely to spread — before its existence had been reported outside of China. “During the course of this coming out, we were saying, ‘You've got to watch out for Taiwan, Japan, Thailand,’” he says. “And then in an order like Japan, Taiwan, Thailand — or something like that — it spread.”

His team, which received $674,800 in funding, then looked at centres in China that were connected to Wuhan through frequent travel and identified areas of risk in Europe and North America. “We showed that, weeks before Iran had evidence of this massive outbreak, we’re like, ‘There's probably a lot of infection in Iran,’” he says. “We were able to call that before that was widely known using flight data, human-mobility data, and stuff like that.”

Bogoch says that using models generated by mobility data can help authorities mitigate COVID-19’s spread, prepare hospitals and infrastructure, and strategically allocate resources. “At a population level, I think it can be extremely helpful. At an individual level, it also can be extremely helpful,” he says, although he notes that there are ethical issues when it comes to tracking people. Modelling can’t be used as a “crystal ball,” he says, but, in the appropriate context, it has clear benefits. “It can help you understand where you're at, where you're going, directions that you could be going in — and help you plan ahead.” 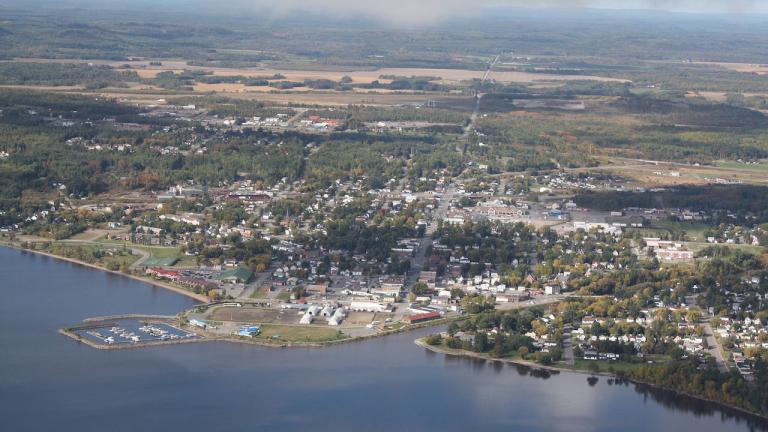 Northeastern
How northeastern Ontario became a surprise COVID-19 hotspot
Sudbury. Algoma. Timiskaming. Each is facing increased cases — and its own challenges in overcoming them.
Nick Dunne

Coronavirus
COVID-19: What you need to know for December 2
TVO.org staff

Coronavirus
COVID-19: What you need to know for December 1
TVO.org staff
sfy39587stp16