How the waters of Grassy Narrows were poisoned

This week a team of Japanese experts on mercury poisoning released a report showing that 90 per cent of the residents of Grassy Narrows First Nation in northwest Ontario suffer from mercury poisoning. This year has seen numerous developments in the Grassy Narrows saga — including revelations that the government ignored warnings of long-hidden mercury dump sites as well as staff advice about the risks of logging in the already-affected area — but the story of how the waters around Grassy Narrows were polluted goes back to Ontario’s origins as a province.

1873: Desperate to open a land route to the west to expand European settlement, the government of Canada signs Treaty 3 with the Ojibway of northwest Ontario, including the Asubpeeschoseewagong (“Grassy Narrows”) First Nation. The treaty promises monetary payments and land reserves for First Nations in exchange for those nations ceding all claim to the lands between Ontario’s 1873 borders and the province of Manitoba in the far northwest ). Canadian commissioners do not explain in detail to the Ojibway what ceding their land title will mean. The Grassy Narrows First Nation is granted a reserve on their traditional lands along the Wabigoon River. 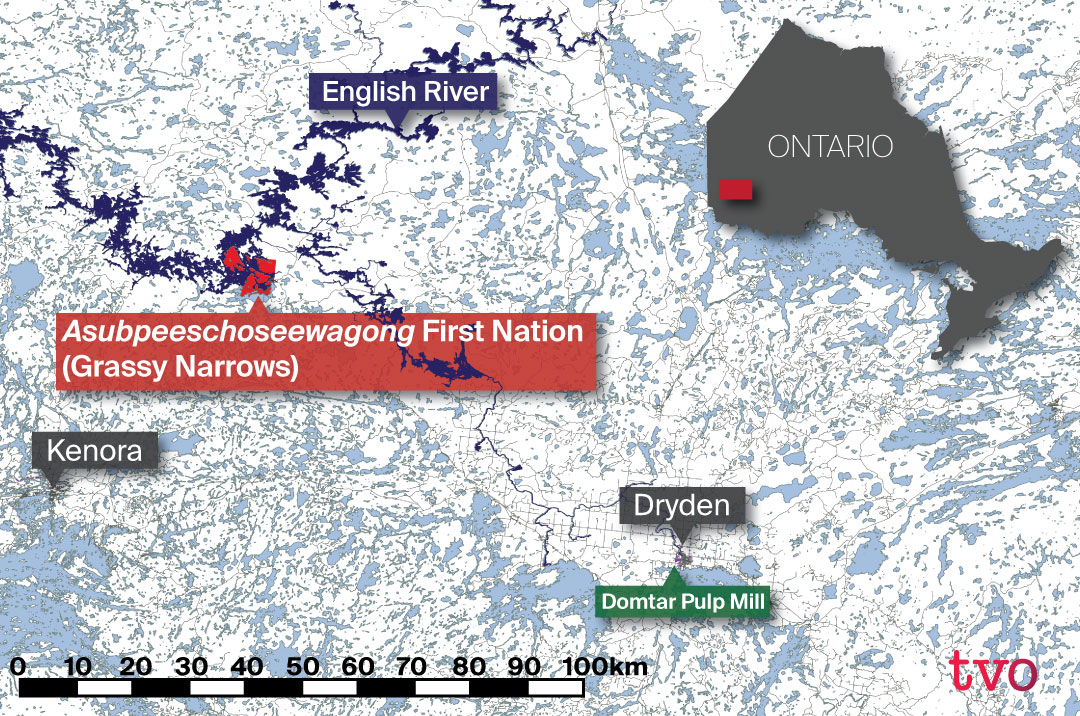 1878-1912: Treaty 3 lands are gradually incorporated into the province of Ontario. They substantially expand the size of the province, and also give Ontario access to vast mineral — and crucially, timber — wealth. In an era before sales and income taxes, northern resource wealth gives Ontario the financial capacity to fulfill its ambitions and build a modern industrial economy.

1913: Dryden Timber and Power begins operating the first kraft process pulp mill in northwest Ontario.  Initially founded as a farming community in 1895, the town of Dryden relies on the mill as a primary employer for much of the 20th century.

1958: The construction of the Whitedog Falls dam on the English River by the Ontario Hydroelectric Power Corporation (now Ontario Power Generation) floods and displaces the Grassy Narrows and Wabaseemoong First Nations.

1962: Dryden Chemical, relying on a mercury-based process to produce bleaching agents for the paper mill nearby, begins dumping untreated mercury waste into the Wabigoon River.

1963: The community of Grassy Narrows is moved several kilometres south by order of the federal government to make the reserve accessible by provincial roads. The stated goal: improving access to public services (water, sewer, electricity) and creating an on-reserve school, which the government said was impossible at the reserve’s old location. The people of Grassy Narrows maintain their traditional reliance on fish, especially walleye, from the Wabigoon River.

1969-70: Federal and provincial officials in both Ontario and Manitoba discover high levels of mercury in the waters and fish downriver from the Dryden Chemical plant. Investigations later determine that Dryden Chemical had dumped more than 20,000 pounds of mercury into the Wabigoon River. The pollution was severe enough that Manitoba tried to financially sanction Dryden Paper: the Supreme Court eventually ruled that Manitoba couldn’t impose a legal penalty on the company  for something it had done in Ontario.

1970: The government of Ontario closes the Wabigoon-English commercial fishery, removing one of the primary sources of income for residents of Grassy Narrows. Ontario also orders Dryden Chemical to make changes to its operations, halting the release of new mercury.

1975-79: Ordered to stop polluting the Wabigoon, Dryden Chemical first stores mercury waste on-site for later safe disposal, and eventually changes its processes to eliminate its use of mercury altogether.

1976: Despite growing public awareness of environmental concerns, Ontario signs a memorandum with Reed Limited to log nearly 50,000 square kilometers of boreal forest in Ontario’s northwest. In response to a public outcry about the proposal — which is eventually abandoned —  the government establishes the Royal Commission on the Northern Environment.

1979: The costs of environmental upgrades, however, come as the forestry industry hits a downturn, and Reed Limited begins the process of selling the Dryden mill and chemical plant to Great Lakes Forestry Products.  Great Lakes tells Reed and the provincial government the ongoing legal proceedings make a sale difficult. The government’s primary concern at this time is maintaining employment at the Dryden mill, and the government offers a limited indemnification for liabilities over $15 million to ensure the sale goes through.

1985: The governments of Canada and Ontario, as well as Reed Limited and Great Lakes, reach a legal settlement with the Grassy Narrows and Wabaseemoong First Nations, providing nearly $17 million in compensation ($34 million in 2016 dollars) for the health effects of mercury in their communities. As part of the settlement and in order to preserve jobs at the Dryden paper mill, Ontario grants the Dryden mill and any future owners a broad indemnity, assuming all environmental liabilities related to the mill and its mercury dumping. The government of Ontario continues to pay compensation to mercury victims as of 2016.

1985: The royal commission established in 1977 reports back. Among its recommendations: the province should play a more active role in supporting northern First Nations, through measures such as issuing large grants of Crown land (including resource rights.) The recommendation is ignored.

1994-98: Great Lakes Paper spins off the mill to Avenor Incorporated in 1994, which is sold to Bowater in 1998. Bowater sells the Dryden mill to Weyerhaeuser later that year.

2003: Weyerhaeuser announces it is shutting down the Dryden sawmill, and lays off plant workers.

2006: Grassy Narrows sues the Ontario government after it issues logging permits to Abitibi-Consolidated Inc. The First Nation alleges the logging will interfere with their treaty rights to harvest and trap.

2009: After a 2007 merger with Weyerhaeuser, Domtar announces it is closing the last paper machine at the Dryden mill, leaving just pulp production.

2011: The Ontario Ministry of Environment orders Weyerhaeuser to monitor mercury levels around the Dryden site. Weyerhaeuser goes to court to stop the order, saying the indemnity Ontario provided in 1985 makes environmental monitoring the government’s responsibility, not the company’s.

2014: The Supreme Court of Canada rules that Ontario has the right to issue logging permits to the land around Grassy Narrows. Also, government scientists warn that logging would exacerbate mercury pollution, leading the Grassy Narrows community to request an environment assessment of the proposal. The provincial government rejects the request.

July 2016: The Ontario Superior Court of Justice rules in favour of Weyerhauser, declaring that the wide-ranging indemnity Ontario gave Great Lakes Paper in 1985 still applies, and exempts the company from monitoring requirements.

Sept. 2016: Japanese experts in mercury poisoning report that 90 per cent of the population of Grassy Narrows and Wabaseemoong First Nations show signs of exposure to the toxin, including people born years after the dumping of mercury ended.