The Liberals crumbled, the CCF drew fire, and the Conservatives won power — and wouldn’t be forced to give it up for another 42 years
By Jamie Bradburn - Published on May 16, 2018
Joe Salsberg, a labour activist and sitting city councillor, carried more than half the vote in his Toronto riding. (Ontario Jewish Archives)

This is the fourth in a series of articles detailing the elections that shaped Ontario.

The 1943 provincial campaign was marked by several significant firsts in Ontario political history. Two women were elected to the legislature, as were two Communists. The modern system involving three major parties debuted with the strong second-place finish of the Co-Operative Commonwealth Federation (which became the NDP in the early 1960s). And the election kicked off the Progressive Conservatives’ 42-year run in office.

After nine years in power, the Liberals were a mess. Mitch Hepburn, who served as premier from 1934 to 1942, deserved most of the blame: his increasingly erratic behaviour — caused possibly, suggests historian Richard M. Alway, by a lack of sleep and too much medication — divided the party. His pathological hatred of Prime Minister William Lyon Mackenzie King prompted him to criticize all federal Liberal policies and to campaign openly for Arthur Meighen when the federal Conservative leader tried, and failed, to win a February 1942 byelection in York South. Hepburn suddenly resigned as premier in October 1942, but retained his role as provincial treasurer. With little consultation, he named Attorney-General Gordon Conant as his successor. During a February 1943 speech, he compared King to Adolf Hitler; Conant asked for his resignation but then acceded to caucus demands for a leadership review.

Instead of supporting Conant, Hepburn backed Harry Nixon, a Brant County farmer who had led a group of Progressives into the Liberal party during the 1930s. Nixon had previously refused the premiership and was critical of Hepburn. That fact that Nixon’s personality was totally unlike Hepburn’s almost certainly helped him win the leadership: “A good serviceable grey,” read a description of him in a June 1943 issue of Maclean’s. “Grey-haired, grey-suited, grey-personalitied.”

As the Liberals fell apart, the Conservatives rebuilt. They gained a new name after Manitoba premier John Bracken, who had been a Progressive, became federal leader in December 1942. A conference held in Port Hope resulted in a leftward policy shift that recognized government’s role in providing social security. In July 1943, the provincial Progressive Conservatives released the Twenty-Two Point Programme, which promised to improve vocational education, cut school taxes, increase mothers’ allowances and old-age pensions, implement a housing program, provide public-service jobs for war veterans, improve natural-resource management, widen public-health care, and support fairer labour negotiations. The Globe and Mail declared the platform to be “the finest social document in Ontario’s history, one which should be read, studied, and thought upon by every citizen.” 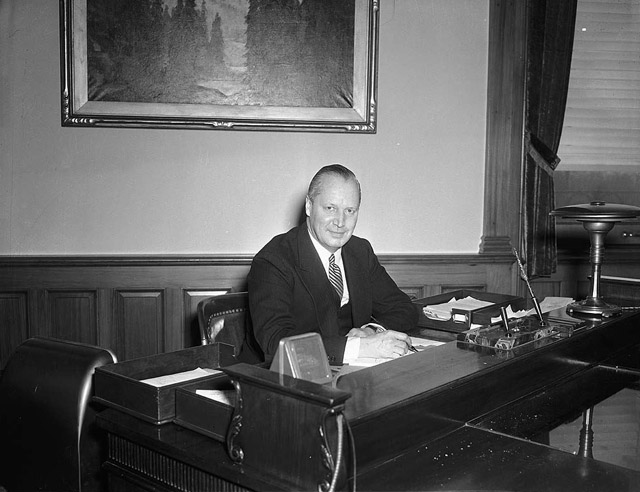 PC leader George Drew’s political career had included stints as mayor of Guelph and chairman of the Ontario Securities Commission. After being dismissed from the civil service when Hepburn cleaned house upon assuming power in 1934, Drew ran unsuccessfully for the Conservative leadership in 1936. Two years later, he made a second attempt and won. A First World War veteran, he frequently criticized the federal government for mismanaging the war effort. “Though Drew was a powerful orator,” writer Bob Plamondon observes, “he lacked the cunning and tactical skills required of a politician. He was not a nation-builder and insulted French Canadians.”

During the campaign, Drew directed most of his attacks at the rapidly rising CCF. Prior to 1942, as writer Gerald Caplan notes, “the CCF assumed almost all the characteristics of an isolated sect, whose activities were conducted in a strangely unreal world entirely of its own making. Little the party said or did was of any significance outside its own small, faithful band of followers.” Like the UFOs of 1919, it lacked an official leader and developed a club-based structure. Also like the UFO, it had some members who were horrified by the prospect of holding power — power, it was thought, could corrupt activist purity. (The party had elected one MPP, Sam Lawrence, who represented Hamilton East between 1934 and 1937.) The press depicted some of the CCF’s radical declarations — those related to the need to replace capitalism, for example — as dangerous, and many Ontarians were uncomfortable with the degree of state control advocated by some CCF members. 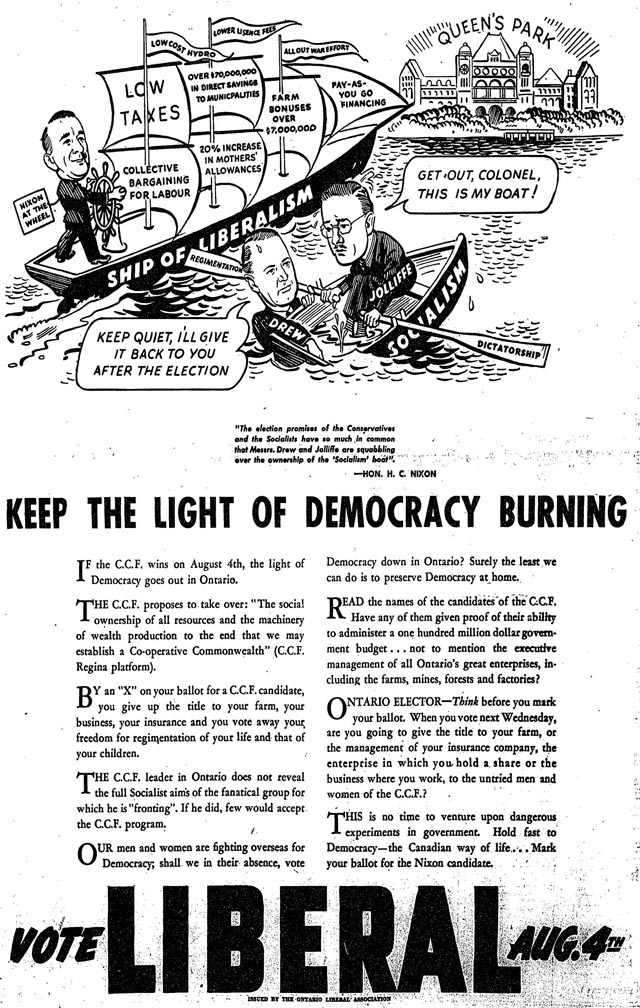 A new wave of party leaders broadened the CCF’s appeal and built stronger ties with the labour movement. Membership widened from CCF clubs and affiliated organizations to the general public, growing from 2,000 at the beginning of 1942 to 15,000 by the end of 1943. Ted Jolliffe, a 33-year-old lawyer and Rhodes Scholar, was named provincial leader in April 1942. “He came from an established and respected old Ontario family, a fact which shone through his radical rhetoric,” Caplan writes. “Some felt he was too young, others that he was excessively cerebral and aloof. But he was experienced and devoted, eloquent and confident, and projected an image of a dedicated yet reasonable crusader.” The party’s momentum was aided by victories in two federal and three provincial byelections across Canada in the 18 months prior to the Ontario campaign.

While its platform wasn’t much more radical than the PCs, the CCF bore the brunt of attacks from the media and other parties. Drew claimed that the dictatorships Canada had fought against during the Second World War had their philosophical origins in socialism. When Liberal depictions of Nixon as a solid man-of-the-soil type didn’t build momentum, they advertised him as Ontario’s only hope against the socialist hordes. One Liberal ad warned that if the CCF won, “You give up the title of your farm, your business, your insurance, and you vote away your freedom from the regimentation of your life and that of your children.” Some Liberal campaign materials claimed that there was greater virtue in Nazism and more honesty in Soviet-style Communism than in democratic socialism. The CCF countered with ads denying that they planned to confiscate property and savings and promising to create postwar conditions that would allow voters to enjoy more of both. They promised to avoid the mistakes the other parties had made during the Great Depression, promising “full employment in PEACE as in war — to win freedom and security for all.”

Communists did contest the election but, due to a federal ban imposed on the Communist Party in 1940, they did so under the Labour Progressive Party banner. Two candidates, A.A. MacLeod and Joe Salsberg, won their Toronto ridings. Salsberg, a labour activist and sitting city councillor, carried more than half the vote in a four-man race in a riding that included Kensington Market. He was aided by his strong presence in the local Jewish community, the party’s anti-fascist stance, and a brief wave of pro-Soviet feelings following their victory over the Germans at the Battle of Stalingrad. Despite their political affiliation, both MacLeod and Salsberg were praised for their skills as MPPs during the 1950s by Premier Leslie Frost. (Some of MacLeod’s political views influenced his nephew, actor Warren Beatty.) 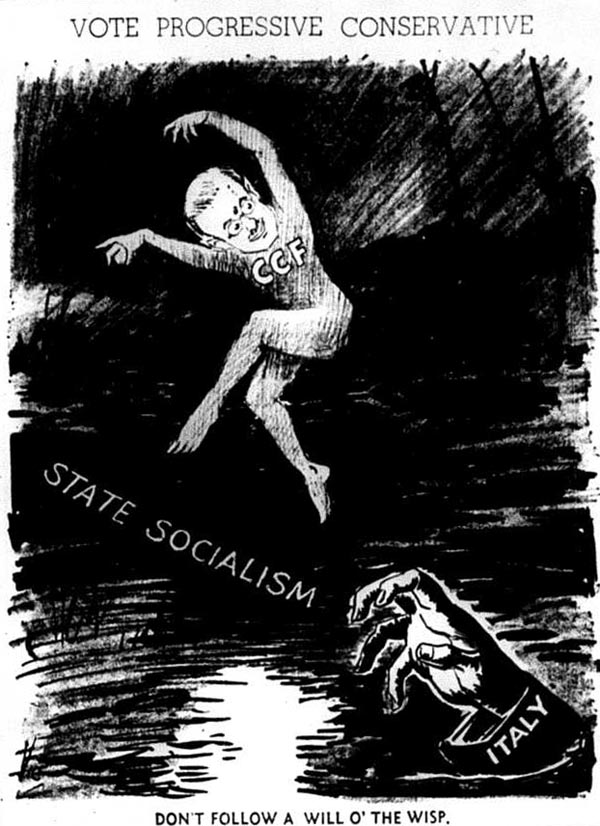 Six female candidates — one Liberal, five CCF — ran for office. Two CCFers became the first women to sit in the legislature. Agnes Macphail brought two decades of experience as Canada’s first female MP to her race in York East. She attributed her win to her track record, her campaign workers, and the fact that “the people have at last realized that the inaction and inefficiency of the two old parties is not what they want from now on.” Voters in the Toronto riding of Bracondale elected Rae Luckock, a school trustee and daughter of former UFO secretary-treasurer J.J. Morrison.

The overall vote on August 4, 1943, gave Ontario its first minority government since 1919. Drew’s PCs won 38 seats, while the CCF went from zero to 34. The Toronto Daily Star observed that the CCF’s strong finish resulted from “the determination of the great masses of the people that a better day shall dawn for the common man.” Drew’s minority survived for two years before he achieved a majority in 1945. After losing his seat in 1948 to a temperance activist, Drew served as federal PC leader until he retired in 1956. His platform provided a blueprint for future PC governments to build upon.

The Liberals fell from 63 seats to 15. Their failure was, according to historian John T. Saywell, the result of their inability to match Drew on the campaign trail “or feel the pulse of the urban Ontario that was emerging from depression and war.” He continues, “Other than a few vague platitudes about post-war reconstruction, the Liberals had no program to offer as an alternative to the progressive stance of the Tories or the radical manifesto of the CCF.” Mackenzie King felt “a sense of relief that a Cabinet that has been so unprincipled and devoid of character has been cleaned out of Queen's Park.” No coalitions were formed — Jolliffe indicated he’d enter one only if it followed the CCF platform, while Hepburn suggested the Liberals work with the PCs to prevent totalitarianism. Nixon was in no mood to play constitutional games and resigned the premiership on August 17 — within a year, he’d been replaced as leader by Hepburn. Nixon’s legacy was a political dynasty that included his son Robert (provincial Liberal leader 1967 to 1976 and treasurer in David Peterson’s government) and granddaughter Jane Stewart (federal Minister of Human Resources under Jean Chrétien).