General Motors has announced that it will close its plant in the city — marking the end of an era that goes back almost 150 years
By Jamie Bradburn - Published on Nov 29, 2018
Aerial view of General Motors, 1944. (Oshawa Public Libraries)

General Motors has defined Oshawa for generations. “It is so big, so pervasive, that many young people grow up believing it to be a branch of government,” wrote the Globe and Mail in 1984. “They may take work elsewhere, but only to tide them over until a job opens up at the Motors.” Earlier this week, though, the company announced that it would be closing its last manufacturing plant in the city — and Oshawa finds itself facing the end of an era.

GM’s roots in Oshawa go back to the late 1870s, when Robert McLaughlin moved his horse-carriage business there from the nearby village of Enniskillen. He’d considered relocating to Bowmanville, but that town already boasted six carriage makers: Oshawa had only one. McLaughlin’s lone competitor predicted that the business would last six months — but it prospered after McLaughlin patented a gear that made it easier to manoeuvre horses, creating a smoother ride.

In the early 1890s, the company purchased an abandoned furniture factory at the intersection of William and Mary streets; over the next decade, McLaughlin grew into one of Canada’s largest carriage makers. When a fire destroyed the plant in 1899, the company temporarily moved production to Gananoque — but it remained committed to Oshawa. “We felt a loyalty to the town in which we had now been established for nearly a quarter of a century,” Robert’s son R.S. “Sam” McLaughlin told Maclean’s in 1954, “a loyalty which amounted to the feeling that Oshawa owned the business as much as the McLaughlins did.” Within a year, a new plant was up and running on the same site.

Just after the turn of the 20th century, the company started taking an interest in a different kind of carriage: the horseless variety. Sam also told the magazine about a fact-finding visit he’d made around that time to the Buffalo-based automaker Pierce-Arrow. While he was admiring the luxury vehicles, he says, a member of the Pierce family commented, “Cars like this have no future, Mr. McLaughlin. I would advise you against trying to make them.” He then recommended that Sam use his carriage experience to produce low-cost models. So Sam struck a deal with Buick — and in 1907, the first McLaughlin-Buick rolled off the line in Oshawa. In 1915, after the company picked up the Canadian manufacturing rights for Chevrolet cars, the carriage business was sold off.

In late 1918, the McLaughlins sold their company to General Motors, which had been founded in Flint, Michigan, a decade earlier; Sam and his brother George stayed on to run the newly created General Motors of Canada. During the 1920s, GM moved its export division to Oshawa, taking advantage of the lower tariff rates Canada had with the rest of the British Empire. GM’s American plants specialized in specific models, but Oshawa could produce vehicles for nearly all its brands.

Production facilities were expanded throughout the 1920s; in 1927, an art deco office building was built on William Street in downtown Oshawa. It later featured a massive neon “General Motors of Canada” sign, which Heather Robertson describes in her book Driving Force:

“The eight-foot letters were painted white with a red border and mounted with neon tubing that was supposed to glow with a deep blue light; at night, however, reflection from the red border gave the sign a pinkish tinge, and when the temperature dropped, the blue glow changed to red, or to a mottled purplish hue. Everyone in Oshawa woke up and went to bed in the sign’s lurid glow, and during daylight hours they used it as a thermometer.” 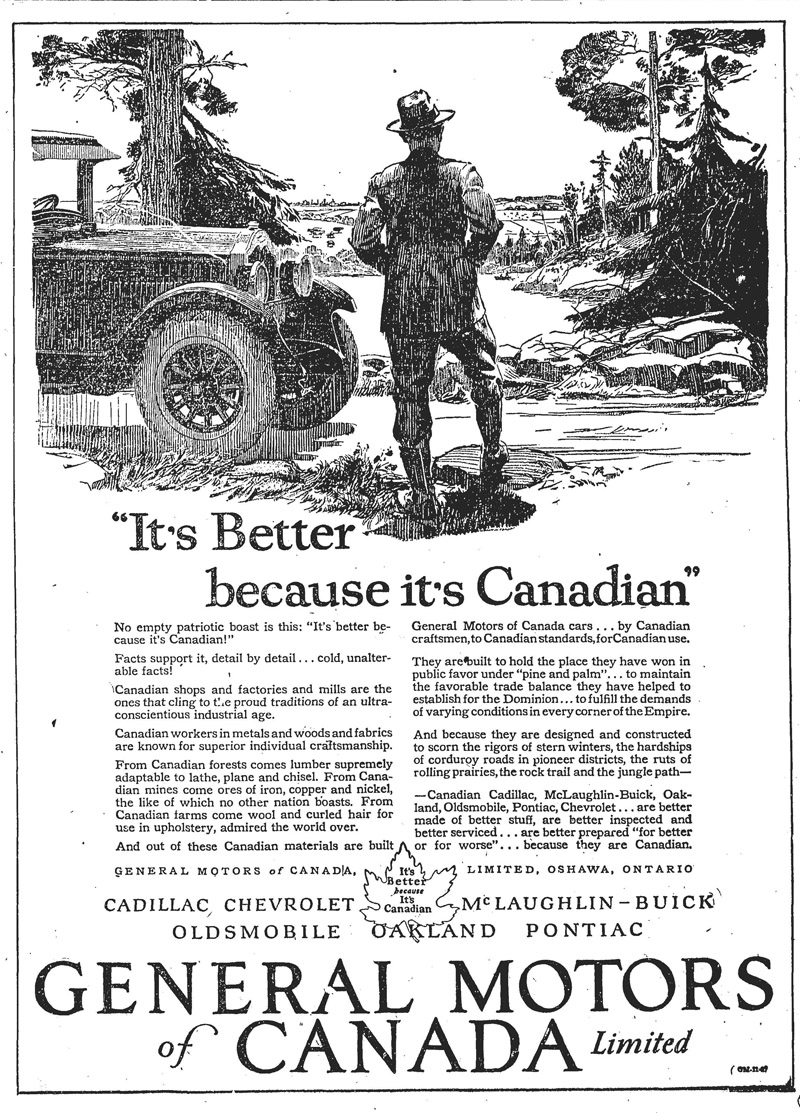 By 1928, the assembly lines produced a vehicle every minute — the need for speed meant that skills and education were not hiring priorities. “If we can get the type of man we want and he is willing to work and do what is right he can get on in the plant and we’ll train him,” employee manager Norman McIlveen told the press. “We break in nearly all our men. If a man wants to learn the automobile business it is better for him to go to a good garage than to an automobile factory.”

To keep employees happy, the company invested in house athletic leagues, a choir, an orchestra, a dramatic and literary society, adult education, and annual summer picnics that regularly drew up to 20,000 people. Workers enjoyed a decent middle-class living. And it was a given that residents drove, as one promotional campaign put it, “the car your neighbour built.”

But the Oshawa facilities also saw their share of labour unrest. The first major employee-organized walkout occurred in March 1928, after a new penny-pinching executive from Detroit cut the piecework pay of trimmers to speed up production. Within days, sympathy walkouts had shut down the lines. Likely thanks in part to pressure from Sam McLaughlin — who often butted heads with American executives — the pay cut was then reversed.

In early 1937, GM workers in Flint went on strike for higher pay and the right to have the recently formed United Auto Workers act as their bargaining agent. When that strike achieved a five-cent-per-hour pay increase, Oshawa workers demanded a similar raise — as well as a 40-hour week and grievance procedures. Workers organized a UAW local (number 222). Ontario premier Mitch Hepburn threatened to crush any strike action, promising “law and order at all costs.” He directed the OPP to infiltrate union meetings, but it failed to uncover any “subversive” activity. After management refused to meet with UAW reps, the workers walked out on April 8. To defuse Hepburn’s threat to “raise an army” to fight the strikers, union stewards ensured that the workers remained calm — Oshawa’s police chief praised their good character. The two-week strike ended when the company agreed to meet many of the workers’ demands. 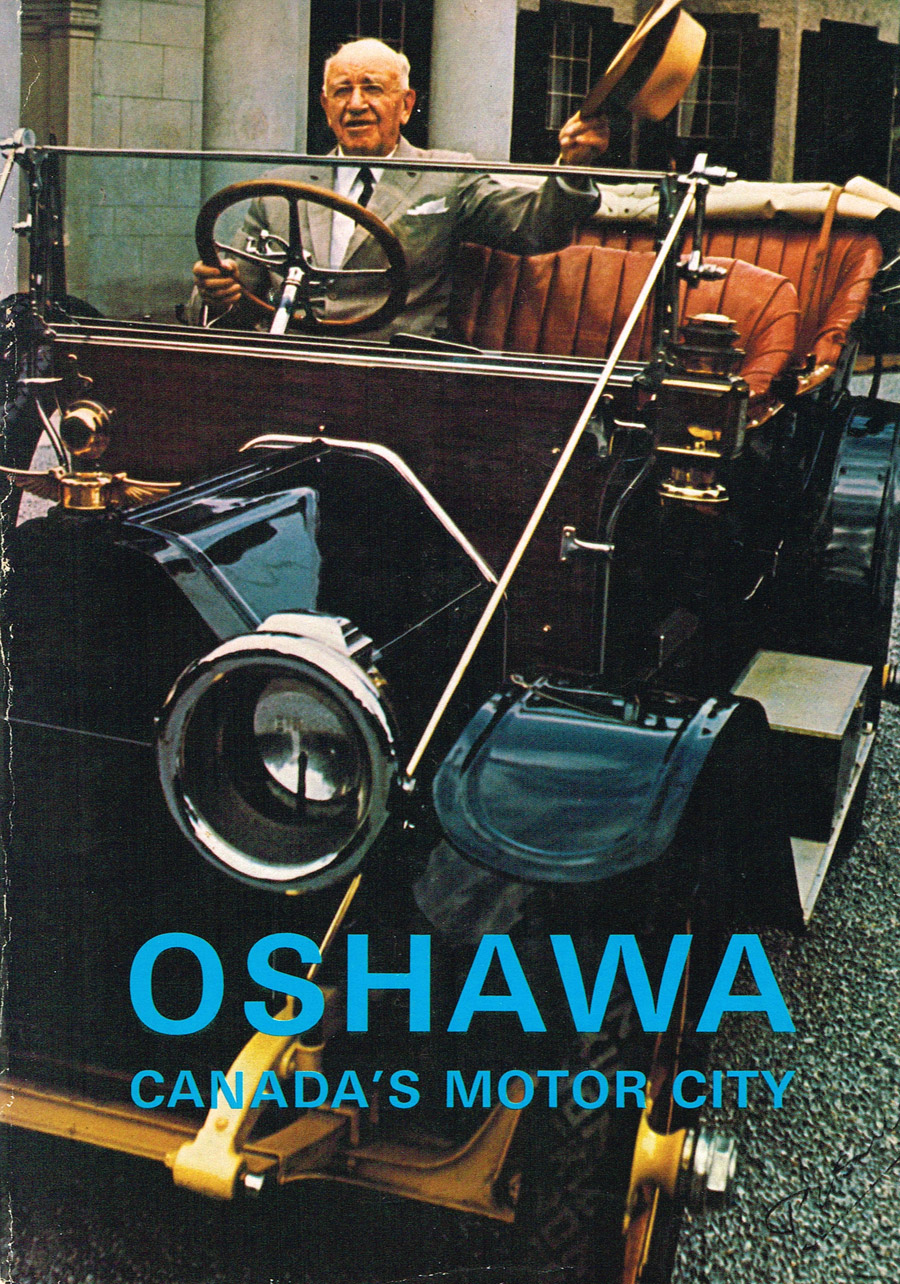 The company continued to grow, filling the city with new plants — a massive complex in the south end was the largest automobile assembly plant in the Commonwealth when it opened in 1953. By 1983, the company was the largest manufacturer in the country. Employing up to 23,000 workers in Oshawa alone, it generated $10 billion in sales and accounted for 40 per cent of the Canadian automotive market. GM Canada’s current headquarters, opened in 1989, consolidated employees from 10 buildings across the city. Oshawa was able to boast that it was “the City that Moto-vates Canada.”

But starting in the 1990s, waves of layoffs and closures shrank GM’s presence, prompting city officials to use tax freezes and other enticements to attract new employers. Despite high industry rankings for the quality of its products, the plants were hit hard whenever GM faced financial trouble. By 2005, there were only 6,000 plant workers — by 2018, that number had fallen to 3,000.

The company’s presence, and that of the McLaughlin family who developed its Canadian operations, are still visible everywhere, from the main downtown library branch and art gallery, which were named after members of the McLaughlin family, to the Generals hockey team, which was originally sponsored by the automaker. But next year, the age of GM will officially come to an end in Oshawa.