How one cantankerous man inspired the creation of the NHL

The Toronto Blueshirts’ troublemaking owner was so reviled by his peers that in 1917 they started a brand-new league without him
By Jamie Bradburn - Published on Dec 19, 2017
The Arena Hockey Club of Toronto won the Stanley Cup in 1918.

​On December 19, the National Hockey League celebrates the 100th anniversary of its on-ice debut — but it’s a safe bet that the man most responsible for the league’s existence won’t receive any special tributes. Yet, had it not been for the sheer animosity that surrounded Toronto sportsman Eddie Livingstone, fans might be enjoying games hosted by the National Hockey Association instead of the NHL.

“A combative, sanctimonious and generally difficult personality,” according to hockey history enthusiast (and former prime minister) Stephen Harper, Livingstone “expected others to live rigidly by the rules while he would skirt their spirit. He regularly denounced those with whom he clashed, while demanding apologies for the thinnest of slights.” Another hockey historian, D’Arcy Jenish, observed that Livingstone was “a slight, bespectacled man who had the gentle demeanour of a pastor but the fastidious personality of a tax collector or a customs inspector.” 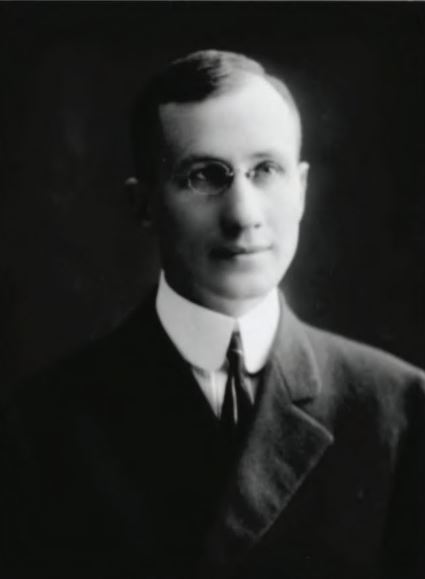 Livingstone, who worked as assistant sports editor for the Mail and Empire, feuded with other owners from the moment he entered the NHA in 1914. In particular, he and Sam Lichtenhein, of the Montreal Wanderers, had it out for each other — each man threatened to buy the other out, and the two even came close to blows on several occasions. When Livingstone, who already owned a team called the Shamrocks, bought another club, called the Blueshirts, the league quickly enacted a new rule, prohibiting any person from owning more than one franchise. Livingstone complained constantly about irregularities he perceived on and off the ice — from questionable refereeing to questionable business practices by the other owners — leading the league to devise ways of getting rid of him.

Things came to a head in early 1917. To help the military recruit more fans, the NHA admitted a team representing the Canadian Expeditionary Force’s 228th Battalion for the 1916-17 season. Livingstone disputed their claims to two of his Toronto Blueshirts players who’d enlisted in the military; as a result, the 228th to threaten to pull out of the league if Livingstone continued to play them.

When the 228th Battalion withdrew from the NHA in February 1917, having been called up to fight in Europe, the other owners saw their chance. The league held a meeting three days later. Livingstone declined to attend, due to illness; instead, he sent a private telegram to league president Frank Robinson indicating that he supported a five-team circuit for the rest of the season. The other owners, whose teams, like Livingstone’s, had been decimated by the First World War, wanted to divide the Blueshirts among themselves to replenish their own teams’ lineups and run with just four teams. And so it went: Toronto was suspended for the rest of the season, and Livingstone was not compensated for the cancelled Blueshirts games or for the players he was compelled to loan out.

Livingstone launched a series of lawsuits against the NHA and its teams. The writs he served in person during the league finals in Ottawa weren’t taken seriously — the Ottawa Senators (no relation to the current franchise) left them in their locker room for an entire weekend.

As the 1917-18 season loomed, the NHA considered dealing with the Livingstone problem by simply forming a new league without the cantankerous owner. After a series of meetings, the National Hockey League was officially established on November 26, 1917. Apart from the name change and lack of Livingstone, little distinguished the NHL from the NHA. “Livingstone was always arguing,” observed Senators part-owner Tommy Gorman. “Let’s make money instead.”

The announcement was delayed by dithering over the future of the Quebec Bulldogs, who decided to sit out the season (they returned in 1919, played one lousy season, then moved to Hamilton). The Bulldogs were replaced by a temporary Toronto franchise, the Toronto Hockey Club, which would play until the legal issues with Livingstone were resolved. The new team, operated by the owners of the Arena Gardens rink, leased its players from Livingstone and agreed not to release, sell, or trade any of them without his consent. It lacked an official nickname, which has caused confusion over the years — the press called them the Blueshirts, while the league retroactively called them the Arenas when it updated the Stanley Cup in the late 1940s.

Several mishaps befell the league over the first few weeks of its existence. The financially shaky Wanderers demanded the rights to all the Bulldogs’ players, then demanded other teams loan them skaters, then threatened to drop out. In Toronto, the man initially hired to manage the team dropped out due to illness and was replaced by Toronto Daily News columnist and Arena Gardens hockey booker Charlie Querrie. A week before the season began, the Toronto Daily Star printed a list of 15 tips from Querrie to his players, including this gem: “Don’t knock your fellow players. Remember they might also have a hammer concealed somewhere and might be tempted to use it.”

The first game on December 19 saw Toronto play the Wanderers at Montreal’s Westmount Arena. Only 700 people showed up, despite an effort by Wanderer management to offer free tickets to wounded soldiers (who, to qualify, had to have been injured in battle, and had to be accompanied by an officer). Wanderer Dave Ritchie scored the NHL’s first goal. The Toronto Daily Star felt he was the star of the evening, “tearing loose with sparkling runs galore.” Ritchie’s teammate Harry Hyland scored five goals, while Toronto’s Reg Noble scored four. The game was a nail-biter — the score was tied several times — but the Wanderers pulled out a 10-9 victory. The Montreal Gazette felt the game reflected “the scarcity of players, as men who would not have been used as substitutes a year ago were on the benches of both teams.”

In Ottawa, the opening matchup between the Senators and the Montreal Canadiens was delayed by contract disputes that plagued the home team. Frank Nighbor, who’d scored 41 goals the previous year, refused to report — he was serving with the flying corps in Toronto and wanted to be traded there. Jack Darragh and Hamby Shore refused to play until their issues with Ottawa management were fixed (they felt their salaries should be higher, since the new league’s season was two games longer than the old league’s). Following a 15-minute delay, the game went ahead without the pair, and by the time they’d hit the rink in the second period, the Senators were behind. They lost 7-4; the press blamed poor ice conditions for the defeat.

The NHL’s first Battle of Ontario occurred three nights later, when the Senators travelled to Toronto. It was an 11-4 blowout for the home team. “While it was not a particularly good game so far as closeness of play and competition is concerned,” the Globe observed, “it was one of those fast, free-scoring, hammer-and-tongs affairs that delight seventy-five percent of the spectators.”

Toronto would win the 1918 Stanley Cup (the same franchise would later win one more as the St. Patricks, and another 11 as the Maple Leafs). When the league awarded the franchise permanently to Arena Gardens, Livingstone threatened more injunctions and unsuccessfully tried to form a new league. Livingstone took his efforts to secure compensation all the way to the highest appeal court in the British Empire, the Judicial Committee of the Privy Council. When his last appeal was exhausted in 1926, he was awarded $10,000 (that’s more than $140,000 in today’s money).

Livingston remained active in amateur hockey in Toronto and outlived many of those who forced his ouster. “All that Eddie Livingstone ever wanted out of a sports deal was fair play,” Globe and Mail columnist J.V. McAree reflected upon Livingstone’s death in 1945, “and that is what he essentially failed to get for himself.”

Sources: A Great Game: The Forgotten Leafs & the Rise of Professional Hockey, by Stephen J. Harper (Toronto: Simon & Schuster, 2013); Deceptions and Doublecross: How the NHL Conquered Hockey, by Morey Holzman and Joseph Nieforth (Dundurn: Toronto, 2002); The NHL: A Centennial History, by D’Arcy Jenish (Toronto: Doubleday Canada, 2013); Joining the Clubs: The Business of the National Hockey League to 1945, by J. Andrew Ross (Syracuse: Syracuse University Press, 2015); The Toronto Maple Leaf Hockey Club Official Centennial Publication, by Kevin Shea and Jason Wilson (Toronto: McClelland & Stewart, 2016); Lords of the Rinks, by John Chi-Kit Wong (Toronto: U of T Press, 2005); the December 20, 1917 and December 24, 1917 editions of the Globe; the February 4, 1944 and September 19, 1945 editions of the Globe and Mail; the December 20, 1917 edition of the Montreal Gazette; and the December 13, 1917 and December 20, 1917 editions of the Toronto Daily Star.

Society
Barbara Amiel: The Lady Black Tells All
A conversation with the high-profile journalist about her new memoir, "Friends and Enemies."
Coronavirus
Has COVID-19 Changed How We Shop for Food?