How Lawren Harris’s art connects generations of my family

“Art is not an amusement, nor a distraction, nor is it, as many men maintain, an escape from life. On the contrary, it is a high training of the soul, essential to the soul's growth, to its unfoldment.” - Lawren Harris

The sketch was so unassuming that when I first walked into the auctioneer’s gallery my eyes searched around, half expecting a larger painting, a more elaborate frame. But there it was, sandwiched between two lesser works: a Lawren Harris sketch for his famous Island, MacCallum Lake, painted on a wooden board.

I had been assigned to photograph Algoma Sketch 48 for Maclean’s magazine, and we moved it around the gallery, hoping to find that same magic light that would have fallen on the board when the oils were still wet.

“He would have loved to see this,” I thought.

The strikingly contemporary work created by Group of Seven artists captured the popular imagination. They hiked into the bush with portable easels strapped to their backs, smears of cadmium yellow, burnt sienna and Prussian blue on their cigar-box palettes. And they inspired many artists to follow in their footsteps.

My grandfather, Ted Hoskinson, was one of them.

As a gunner returning from the shattered forests of France and Holland in 1945, Ted’s passion for painting may have been a way of reconnecting with Canada’s unspoiled wilderness. His paintings hung in our family’s dining room, and when I was growing up I used to look up 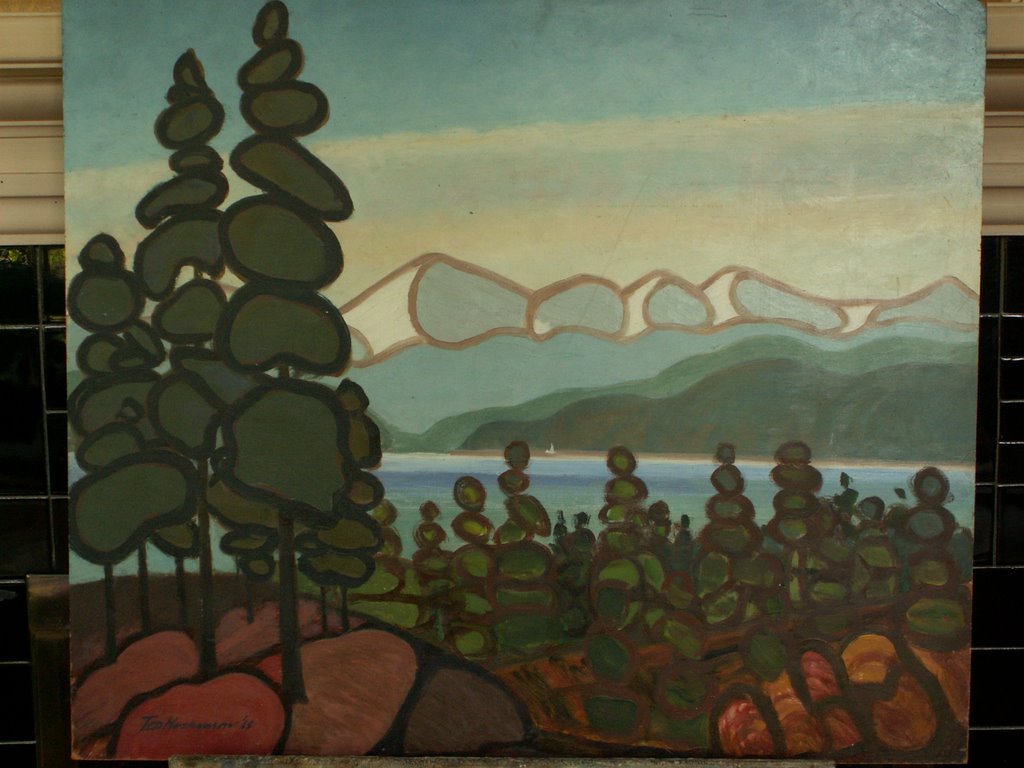 at them and imagine his eyes scanning the landscape.

My mom, it turns out, got to see this for herself: “I always thought that his true workshop was outside, setting up his easel wherever the view inspired. He painted mainly the North Shore mountains of Vancouver, from Point Grey, with boats, trees and the harbour and beaches in the foreground. The view changed constantly — some days the mountains were so clear you could see them all the way up the Sunshine Coast.”

I did get to visit his studio in Kitsilano. What I remember is hazy, either because I was very young or because the smoke from his House of Lords cigars hung heavy in the air. But there were oil paints, multiple canvases, a little toy cannon that fired matchsticks, tall brushes soaking in turpentine. The smell of the place stuck with me: liberating, but also like a sanctuary.

My aunt, Cathrin Hoskinson — an artist herself — shared this with me:

“When I was young I went with my dad several times to the Vancouver Art Gallery to admire the work of Canadian landscape painters ... of the Group of Seven, particularly Tom Thomson, Lawren Harris, A. Y. Jackson and also Goodridge Roberts.

“Most of his work was done outside, using Masonite boards, which were of a size to fit into the slots of his wooden paintbox, and he often left some of the brown board showing between the areas of colour. Like the Group of Seven artists, he tended to keep the colour as clear as possible, painting the background around the foreground instead of one on top of the other, and using large solid areas of colour to simplify the forms.

"Like them, he was also aware of the role of brushstrokes in creating a dynamic, fresh, image, as if filled with the outdoor air. I was lucky to paint with him sometimes, with my small paintbox next to his.” 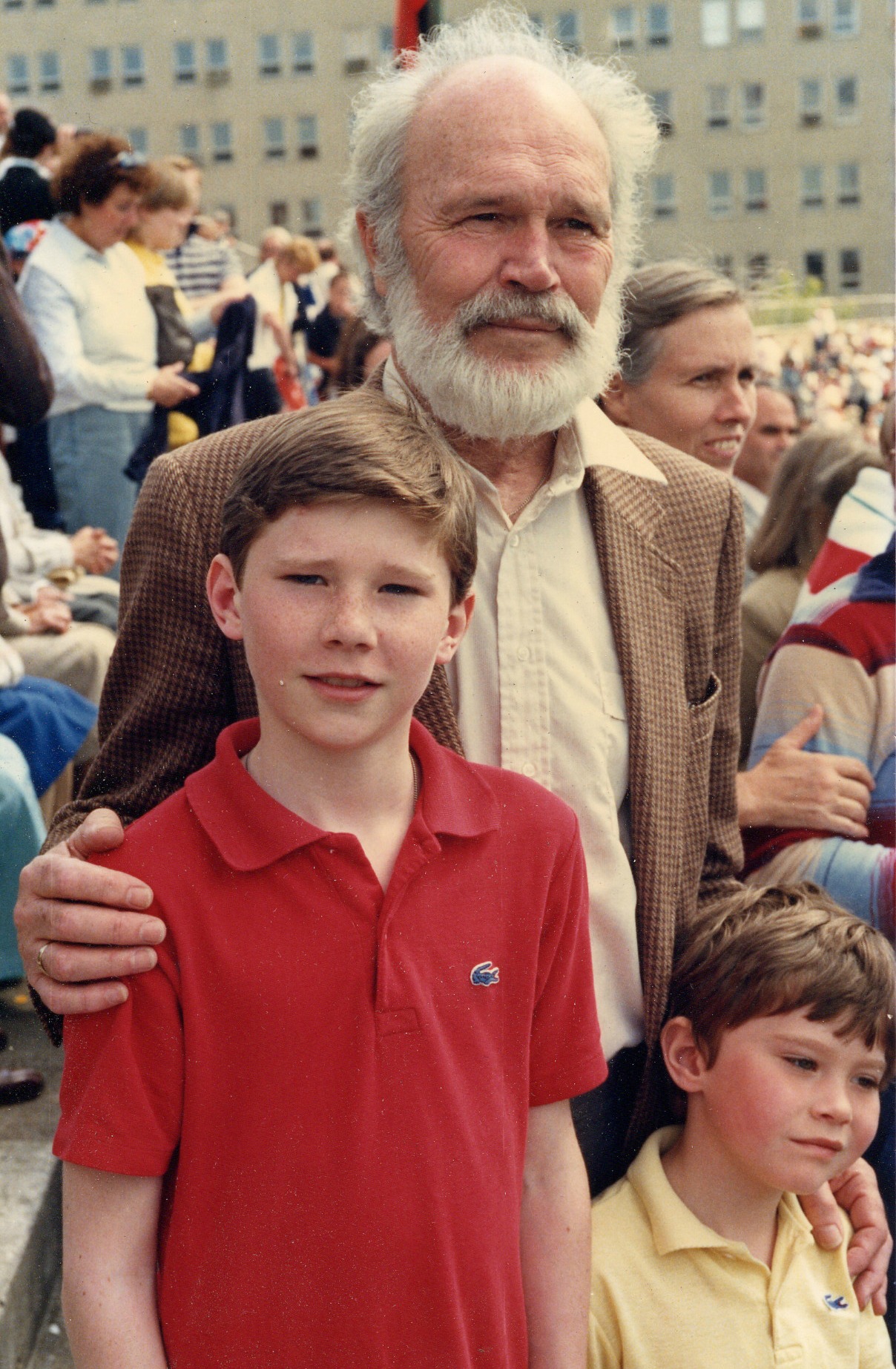 He drove across the country in the mid-1980s, making oil sketches as he went. After he died, another aunt, Joan Hoskinson, retraced one of his trips:

“In the autumn of 1987, I followed his route around the north shore of Lake Superior, stopping at the spots where he had made those sketches. One was near Nipigon, up above the Trans-Canada, on a rock outcropping where the Canadian Shield had been cut through for the highway. Dad had regretted he left his sunglasses there, so I was thrilled to find the spot. But in spite of an intensive search, I did not find his sunglasses.

“The next day I stopped at the Journey's End ‘resort’ at the mouth of the Montreal River at Batchawana Bay. I wondered if Dad had chosen this spot because of its deep connection with the Group of Seven. His pencilled inscription on the back of his sketch, Journey's End, will always have a special meaning for me.”

I visited a thrift store the other day. I poked through a basket of cheap aviators and imitation Wayfarers, but didn’t find anything I liked. One wall was covered in secondhand art: laminated posters of boy bands and kittens, amateurish renderings of lakeshores and forests. And then I paused. One canvas stood out — a piece with broad brushstrokes and bold outlines, trees reduced to shapes and a sky that sang with colour. I peered closely at the name painted in the corner, just to make sure it wasn’t one of his.

It’s funny how things resonate. Or how, in Harris’s words: “A picture can become for us a highway between a particular thing and a universal feeling.”

The Idea of North: The Paintings of Lawren Harris is on exhibit at the Art Gallery of Ontario from July 1 to September 18.

Watch Where the Universe Sings: The Spiritual Journey of Lawren Harris:

Liam Maloney is a documentary photographer and videographer based in Toronto.