ANALYSIS: The government touts its funding for transit, but those in rural and northern areas are being left behind
By Sean Marshall - Published on Nov 28, 2017
Cuts to intercity bus service are affecting rural residents’ access to jobs, health care, and family. (Stephen C. Host/CP)

Pay a visit to the busy Toronto Coach Terminal at Bay and Dundas streets, and you’d be forgiven for thinking bus service is alive and well in Ontario. Long lines form for buses that have not even pulled in yet. Commuters travel to and from cities like St. Catharines, Brantford, Cambridge, and Peterborough. Crowds are especially large on Friday and Sunday nights as students head to and from university and college. The bus also remains a popular — if gruelling — way to get to far-off destinations like New York. But at the ticket counter, the number of destinations for which one can buy a ticket has plummeted. Hundreds of weekly bus trips and dozens of routes have been cut in the last 30 years.

There are still many bus options if you’re travelling between large cities. More than 10 double-decker buses run on Highway 401 between Toronto, Kingston, and Montreal each day, competing in the same market as VIA Rail, Air Canada, WestJet, and Porter. Greyhound offers seven buses a day between Toronto and Ottawa — another route where rail, bus, and air operators provide multiple options for travel. Bus service between Toronto, St. Catharines, and Niagara, and between Toronto and larger cities in Western Ontario including Kitchener, London, and Windsor, also remains strong.

All of these routes have something in common: they connect larger cities, all with major post-secondary educational institutions (students are a reliable market) and run express, making few stops.

But outside these major corridors, the state of intercity bus travel in Ontario is bleak. In 2015, for example, Greyhound cut the number of buses between Ottawa and Sudbury in half. From Kenora to Cornwall, these cuts are affecting rural residents’ access to jobs, health care, and family.

The Liberals proudly point to their record on building and expanding highways and urban transit. On December 17, the province will celebrate the opening of a new $3.2 billion subway extension to Toronto’s York University and the City of Vaughan. It has also committed to a new one-stop subway extension in Scarborough that will cost at least $3.3 billion and to new light-rail projects in Kitchener-Waterloo and Ottawa (others have been proposed for Hamilton and Mississauga, as well). It is planning an expansion of the GO Transit rail system, and a high-speed rail line from Toronto to Kitchener and London. In Northern Ontario, Highway 69 is being twinned between Parry Sound and Sudbury, as is Highway 17 near Kenora and Thunder Bay.

But although studies on the modernization of the province’s beleaguered, skeletal bus system got underway in 2016, thus far, they’re resulted in no improvements to intercity bus travel in Ontario — it remains an afterthought.

Until the early 1990s, the Ontario Ministry of Transportation published a map of all scheduled intercity transportation routes — bus, rail, and air — in the province. In 1991, virtually every city and town in Ontario, from Hawkesbury to Leamington to Rainy River, had access to at least one daily intercity bus route. The Ontario Highway Transport Board regulated this network, awarding bus operators monopolies for each corridor, with an understanding that larger profits from buses connecting large city pairs would help subsidize rural routes. But when bus ridership between large cities declined, the province was unwilling to step in to protect small markets, and the network fell apart. (The Ministry of Transportation no longer publishes a map of intercity rail and bus routes.) 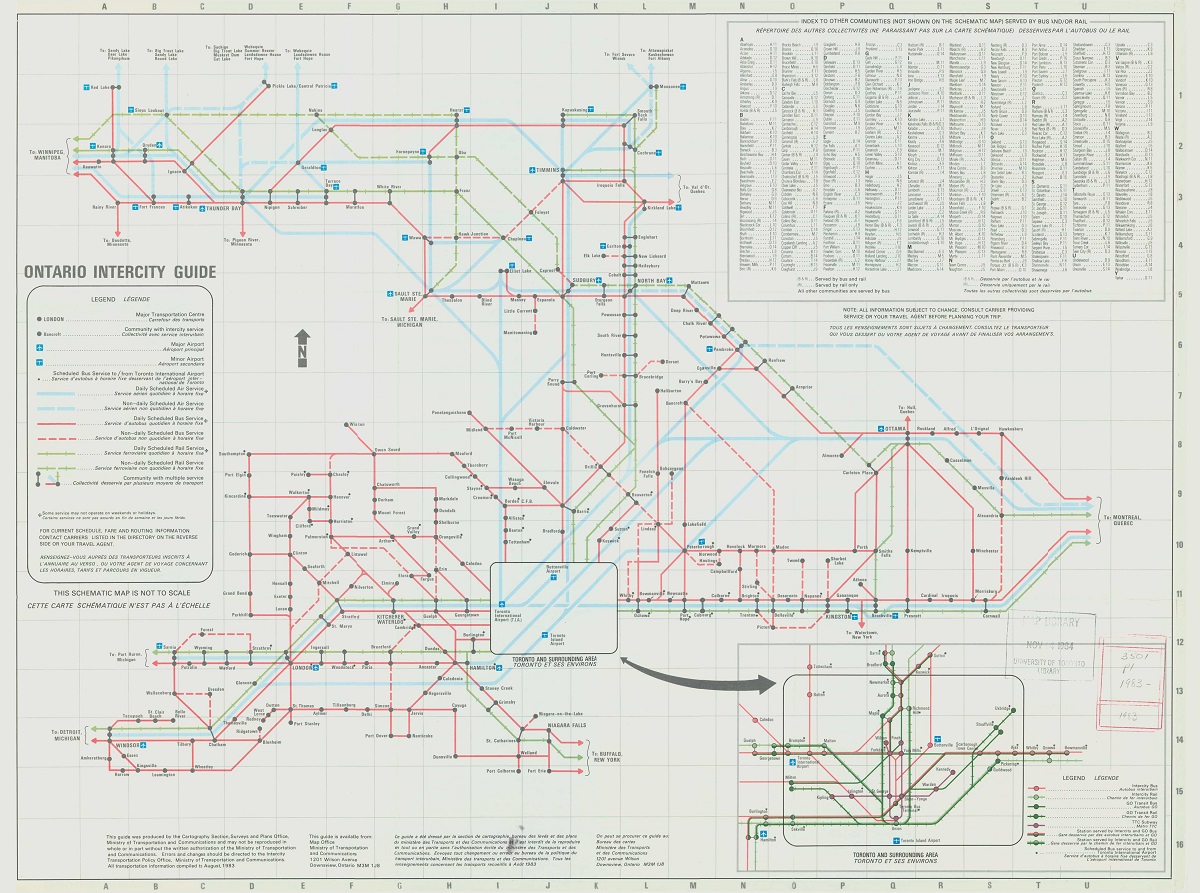 St. Thomas, a city of 38,000 located 25 kilometres south of London, was once an important railway centre — it even billed itself as the Railway Capital of Canada — but the last passenger train to stop there was Amtrak’s Niagara Rainbow, in 1979. At one point, residents had access to daily buses going in every direction.

During the 1980s, St. Thomas was served by three different intercity bus operators:  Greyhound, Chatham Coach, and Erie Coach Lines. Several daily buses departed for London from the downtown; there were also daily buses to nearby communities such as Port Stanley, Tillsonburg, and Chatham. But by the early 2000s, most of those services had disappeared; Greyhound’s last service, a once-a-week run between London and Niagara Falls via St. Thomas and Simcoe, was cancelled in April 2010.

Aboutown, a London-based taxi and bus operator, tried to make a go of it in western Ontario, picking up routes cut by Greyhound, Coach Canada, and other local operators. Between 2011 and 2013, Aboutown Northlink operated three weekday round trips between London, St. Thomas, and Port Stanley; two daily buses between Guelph and Hamilton via McMaster; and other less frequent routes serving cities and towns like Stratford, Owen Sound, Listowel, Strathroy, and Sarnia.

At the end of 2013, though, Aboutown — which also operated airport shuttles and a fleet of taxis in London — went into receivership, and St. Thomas’s only scheduled intercity service disappeared. Both cities operate local transit services, but for those without cars, the only way to travel between St. Thomas and London is a $50 taxi ride.

Guelph and Hamilton, only 45 kilometres apart, and both larger cities with major university campuses, have also been disconnected by Aboutown’s demise. The route was once served by Canada Coach Lines, but Coach Canada abandoned the route in 2009. Anyone looking to travel between Hamilton and Guelph either has to travel through Kitchener, transferring between Megabus and Greyhound, or take a GO Transit bus to Mississauga and then transfer to another bus to Hamilton. Either route would take two and half hours, including transfer time; by car, the same drive, in moderate traffic, would take about an hour.

In some cases, the province could step in and fill the gap left by private operators. GO Transit’s expansion of train and bus service to Kitchener-Waterloo, Niagara, and Peterborough has been quite successful; the public transit system would be well positioned to operate a route in, say, the Guelph-Hamilton corridor, which has twice been abandoned by private companies. But further expansion of GO Transit’s service area would not be enough to fill the growing gaps in Ontario’s intercity rail and bus network.

In 2016, the Ontario Ministry of Transportation proposed several changes to its regulations for private bus operators in a bid to “modernize” the system: recommendations included deregulation and making it easier for shared vans to provide services once operated by large coach buses. Despite these proposals, there been no appetite for direct government subsidies to keep these services going; when the Northlander train between Toronto, North Bay, and Cochrane was cancelled, Ontario Northland promised “enhanced bus service,” but it’s since been forced to make cuts as well.

While the province does a good job promoting the funding it provides for urban transit capital projects, it barely even pays lip service to transit in rural and northern Ontario. The disparity between the attention it gives transit in the Golden Horseshoe and the total lack of interest it shows in rural transportation is stark. All three of the major parties will be competing for voters’ attentions ahead of the June 2018 election, and traffic congestion and urban transit projects are likely to be major issues — but it’s unlikely that rural transport will get anywhere near the same airtime.

Podcast
Ontario's confusing reopening
As the province gets ready to re-open, Steve Paikin and John Michael McGrath have got some questions.

Politics
What's ON: The week ahead in Ontario politics (January 24-28)
Daniel Kitts

Politics
What’s ON: The week that was in Ontario politics (January 17-21)
Daniel Kitts