How I switched from writing fiction to a daunting memoir

By Diane Schoemperlen - Published on Aug 08, 2016
Diane Schoemperlen: This Is Not My Life is my “plainsong” – just me telling the reader the story as if we were two close friends sitting at the kitchen table talking. (iStock/mactrunk)

As it turned out, the answer to my foolish question was: Hard. Very hard. Extremely hard. It took me a whole year of frustration and false starts to even come close to figuring out how to do it. During that time, I read many other people’s memoirs and many books about how to write a memoir. Some of this reading was helpful, but some of it left me feeling even more confused.

Eventually I came to the conclusion that there are as many different ways to write a memoir as there are to write a novel or a short story. I had never been much concerned about abiding by the conventions of fiction writing. Now I had to dig up that kind of confidence about writing a memoir and do it the way I thought would work best for me and this particular story. At that point, I tried to put the daunting word “memoir” out of my mind and concentrate on writing the story, the true story of my six-year relationship with a federal inmate serving a life sentence for second-degree murder.

Every single one of the books about writing a memoir that I’d read said it must not be written in chronological order because that would be boring to the reader. This was the first so-called rule I had to set aside. I knew this story would not make much sense unless it was told chronologically. 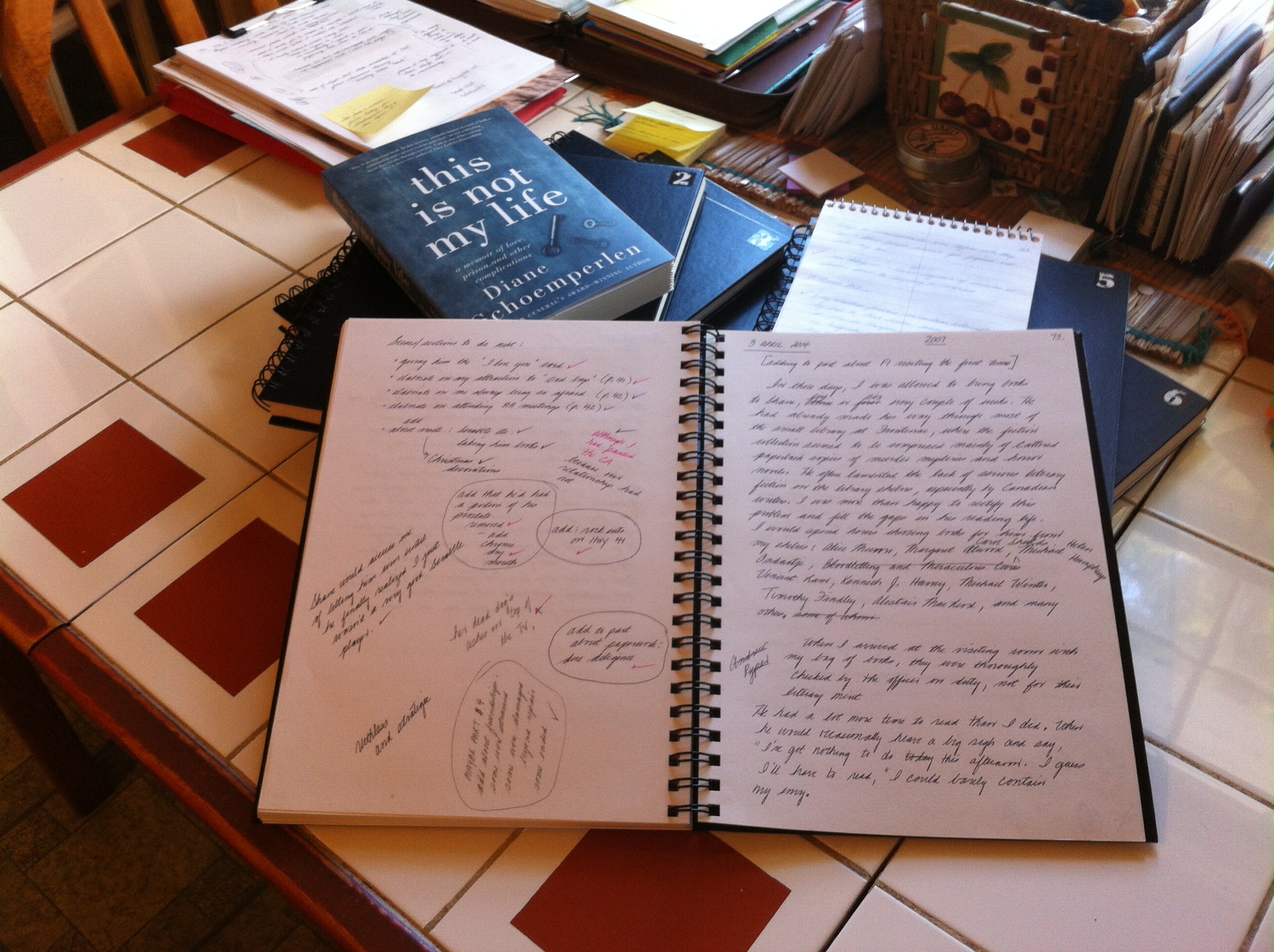 I began by organizing the material, a process that also helped to organize my mind.

Although I had not kept a journal during our relationship, I have a good memory and I had accumulated plenty of paperwork over those years — hundreds of cards and letters, stacks of Correctional Service of Canada reports and parole decisions.

I also had my day-timers and my kitchen wall calendars on which I had noted what happened and when – a life-long habit that served me well in writing this book. Then I wrote what I called the skeleton, a detailed chronological outline of our years together that ended up being over 100 pages. This was not something I had ever done for any of my fiction.

By the time I had finished this preliminary work, I realized that, in addition to dispensing with many of the conventions of writing memoir, I was also going to have to dispense with much of what I had learned from writing literary fiction and venture headfirst into uncharted territory.

It took me another year to write the first draft. Here again I found that each step of the process bore very little resemblance to my process of writing fiction. This time I wrote the easy parts first: descriptions of the prison visiting room, details of my search for the perfect outfit to wear to a parole hearing, the history of my life-long fear of thunderstorms. A large part of what I was working out was finding the right voice and tone. I discovered that I could not tell this story in my usual literary style. Rather, I had to turn Emily Dickinson’s advice to “tell it slant” on its head and tell it straight.

The voice in This Is Not My Life is what I came to think of as my “plainsong” – just me telling the reader the story as if we were two close friends sitting at the kitchen table talking. I was also guided by a line I’d noted in Natalie Goldberg’s book, Old Friend from Far Away: The Practice of Writing Memoir: “There is no justification required, only examination.”

While most of my fiction contains some autobiographical elements, I still had the word “fiction” to hide behind — I could always say I made it up. But now with a memoir, I had nowhere to hide. Sometimes I felt very vulnerable but I got used to the discomfort of that... most of the time. One day not long after the book came out, I had some awkward moments at the Metro grocery store. While browsing for a particular kind of bread, I ran into an acquaintance I’d known for over twenty years. She said, joyfully, “I just finished reading your book!” I said, happily, “Oh, that’s wonderful! Thanks!” She said, “It was…[long pause]…interesting. I know a lot more about you than I did before. Does that bother you?” Grabbing a loaf (any loaf), I said, “Uh, no.” And fled.

When working on a book of fiction, I am usually very secretive and don’t like to talk about my work-in-progress. But with this book, I talked about it at length to anyone who would listen. This too was an important part of working out the challenges I was grappling with. I recall lamenting to one friend that one of the hardest things about memoir is that you can’t make things up. At times I felt constrained by my own need to tell the truth, the whole truth, and nothing but the truth. My friend laughed and said, “You know memoirs aren’t really true anyway!” But mine is.

Then there was the matter of deciding what to put in and what to leave out. I’d read somewhere that when writing fiction, you begin with an empty canvas and fill it up; but with memoir, you begin with a full canvas and take things out. This canvas proved to be very full indeed. I was, after all, writing about my own life (despite the title) and, being as egocentric as the next person, everything seemed important. When I handed in the first draft it was over 500 pages, about 140,000 words. My contract called for a manuscript of 90,000 words. My dear editor, Jennifer Lambert, took this quite well. “It’s a good thing you got all that out,” she said gently, “but now we have to rein it in a bit. Start by cutting 40,000 words.”

And so began the intense editing process – which took another year. Again, this was not something I had ever gone through with any of my fiction. I will be forever grateful to Jennifer for her patience, her sensitivity, and her wonderful sense of humour. But by the time we were ready to call the book done, I swore that I would never write another memoir again. And yet now when I hold the finished book in my hand, I feel very proud of it and there is a little voice whispering in the back of my mind: Never say never.

Born and raised in Thunder Bay, Diane Schoemperlen is the author of thirteen books. Her collection of illustrated stories, Forms of Devotion: Stories and Pictures won the 1998 Governor-General’s Award for English Fiction. She received the 2007 Marian Engel Award from the Writers’ Trust of Canada. Diane has lived in Kingston since 1986. She is on the faculty of the Humber School of Writing Correspondence Program.

Born and raised in Thunder Bay, Diane Schoemperlen is the author of thirteen books. Her collection of illustrated stories, Forms of Devotion: Stories and Pictures won the 1998 Governor-General’s Award for English Fiction. She received the 2007 Marian Engel Award from the Writers’ Trust of Canada. Diane has lived in Kingston since 1986. She is on the faculty of the Humber School of Writing Correspondence Program.