How do you run a COVID-19 vaccination effort in a remote community?

Winter roads. Far-flung communities. Thousands of doses of vaccine. Inside the efforts to stage “probably the biggest public-health program Canada has ever undertaken”
By Charnel Anderson - Published on Jan 26, 2021
Registered nurse Amanda Friday (left) receives her first dose of the COVID-19 vaccine at Weeneebayko General Hospital, in Moose Factory, on January 11. (Courtesy of Yolaine Kirlew)

During a conference call last week, Grand Chief Alvin Fiddler and provincial health representatives discussed a crucial question: How would vaccine teams transport the COVID-19 vaccine to a remote First Nations community without an airstrip?

“We have to look at landing in another community and then figuring out a way to get there, whether by snow machine or by truck,” says Fiddler, of Nishnawbe Aski Nation, which represents 49 First Nations in the north. The community, he adds, would need to build a winter road by February in order for the team to get the vaccine from one community to another about 50 kilometres away.

That’s just one example of the complex logistics involved in distributing the vaccine to First Nations communities in Ontario’s far north. Health-care teams administering the vaccine will have to grapple with a lack of existing infrastructure and human resources — and with inclement weather — in order to inject 32,000 doses of the Moderna COVID-19 vaccine into people living in 31 remote communities.

“This is not a vaccine rollout,” says John Guilfoyle, a public-health physician with Sioux Lookout First Nation Health Authority. “This is a major immunization program. In fact, it’s probably the biggest public-health program Canada has ever undertaken.”

Shortly before Health Canada approved the use of the Moderna vaccine, on December 23, 2021, Homer Tien, president and CEO of Ornge, Ontario’s air-ambulance service, was asked to lead the vaccine distribution in remote communities. “We already do a lot of work with northern fly-in communities,” says Tien, who points out that Ornge has a “very close working relationship with the leadership in these communities.”

Ornge has been working with NAN and countless other provincial and federal organizations to develop the immunization strategy. Over the past few weeks, NAN and Ornge have contacted local leaders to prepare their communities for the mass-vaccination clinics.

“We have our vaccine deniers, and, I think … it’s because of the sad and sometimes tragic history of health care and how it’s been delivered historically in our communities,” says Fiddler. “That’s what we’re up against with this vaccine. We want to make sure that everyone understands what the vaccine is, what’s in it, and why it’s important that they give their consent to receive it.”

WAHA, which has more existing health-care infrastructure and serves fewer communities, is holding mass-vaccination clinics starting January 26, with Peawanuck — a Cree community of fewer than 250 people near Hudson Bay. “Ornge is helping them to get the vaccines, but generally, they’re being supported by what exists there already,” says Tobey Meyer, a senior policy analyst with NAN.

“For the rest of the communities, there’s not much that exists,” Meyer says. “So that’s where those communities are being asked to host vaccine teams.”

The vaccine teams, led by Ornge, consist of six people: a team lead, an administrator, and four health-care workers. Those workers could include paramedics, physicians, nurses, and residents and medical students, some of whom will be coming from the Northern Ontario School of Medicine, in Sudbury, and Queen’s University, in Kingston. Community members are also being recruited to assist with transportation, translation, and coordinating such things as the site of the vaccination clinic.

“When it’s clinic day, a plane lands, and the vaccinators get off the plane, and they go to the clinic that has been set up,” says Meyer. “The team goes, they vaccinate as many people as they can in that day, and then they leave for the night and stay somewhere in a staging area, likely Sioux Lookout or Timmins, or whatever makes the most sense.”

In order to vaccinate as many people as possible, teams will be stationed in each community for five days. They will be available to answer questions and educate those who may be hesitant to get the vaccine. Team members will be available to make house calls for people who cannot make it to the clinic.

Compared with those in other provinces, First Nations in Ontario have managed to keep the number of COVID-19 cases on-reserve relatively low — and community leaders have insisted that the vaccination teams be fully vaccinated before coming into the communities. Guilfoyle says that the risk that these vaccine teams will bring the virus with them is “very limited” and that they’ll be “taking all public-health measures … to ensure that there’s minimum risk of any transmission.”

Tien says that members are in the process of being inoculated and that some team members are already fully vaccinated. The first group of vaccine teams will be ready to go to six communities starting February 1. According to Tien, they’re aiming to have the first round of doses (roughly 16,000) administered by March 15 and the second round of doses by April 30.

It’s unclear exactly what proportion of the population living in remote communities will be vaccinated through these clinics, because the vaccine has not yet been approved for use in people under 18 (in 2016, 32.5 per cent of Indigenous people were under the age of 19, compared with 22.5 per cent of non-Indigenous people under the age of 19) and because of issues around vaccine hesitancy.

“We’re going to have to be very careful to protect the communities, because it will be incompletely vaccinated, but every bit of vaccination will help,” says Guilfoyle. “If we’re not susceptible to the virus, we can’t become infected with it. We’re protected … and likely we will protect others. The more people are immunized, the less transmission.”

Health
Why this doctor plans to use psychedelic drugs
Charnel Anderson 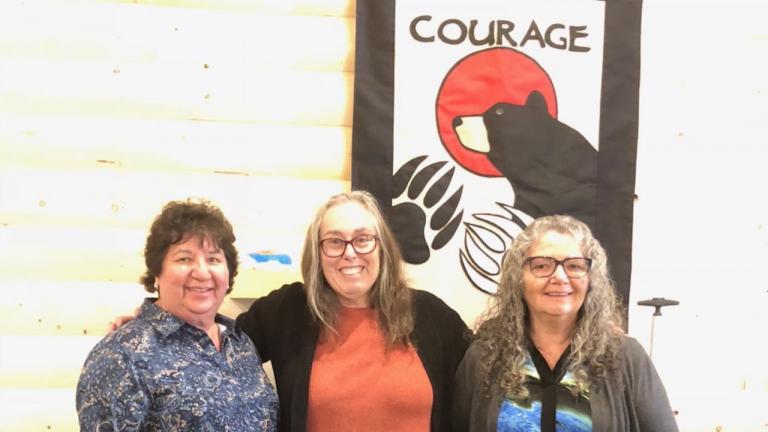