How Canada set up Aboriginal treaties to keep First Nations down

The development of Canadian law was also a gradual dismantling of Indigenous rights, a new essay collection argues
By TVO Current Affairs - Published on Apr 25, 2017
Wampum belts representing the Treaty of Niagara on display at a celebration of the 250th anniversary of the agreement, in 2014. (Averill Lehan/ProActive Imaging/facebook.com)

The following is excerpted from "Canada’s Colonial Constitution," an essay by John Borrows, published in The Right Relationship: Reimagining the Implementation of Historical Treaties. The book, from University of Toronto press, comprises scholarly essays on the history of First Nations treaties with Canada and on the challenges they present today.

There are many stories about how Canada was formed. One of those stories focuses on the dispossession and displacement of the land’s first inhabitants through force. Doctrines of discovery, adverse possession, and conquest figure prominently in these accounts. These doctrines imply that Canada was legally empty when Europeans arrived. “Discovering” nations claimed Indigenous peoples’ lands by the sheer power of their words; through the force of “law” alone. As the Supreme Court of Canada wrote in its seminal Aboriginal rights case, “from the outset never any doubt that sovereignty and legislative power, and indeed the underlying title, to such lands vested in the Crown." The Court concluded that the Crown had sovereignty and underlying titled in Canada because Indigenous peoples have inferior legal status.

There are many problems with this story. It founds Canada on racist assumptions. It presumes there was a conquest when there was never any war. It assumes Indigenous peoples had imperfect claims to sovereignty and title when Europeans arrived. 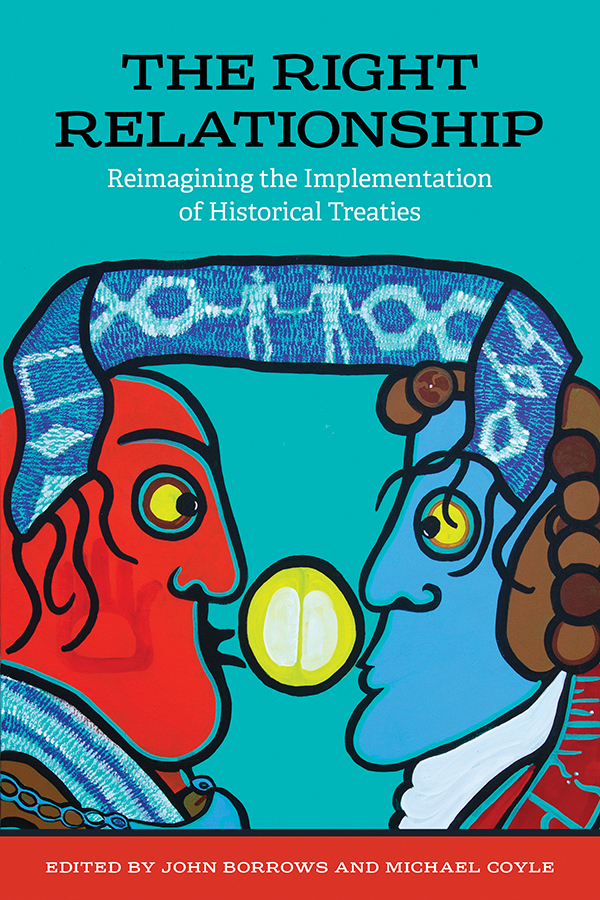 Indigenous peoples are pushed aside in this story because their legal status is subordinate to European power. If Canadian law flows from this view, it revolves around a loathsome core. Discrimination, coercion, and inequality lie at the roots of Canada’s legal system under this view. All subsequent acts are tainted by an original sin. This story tells Canadians that our deepest political values are ultimately traceable to a denial of fairness, equality, and mutual respect. This builds Canada on a dishonourable foundation. In this view, subsequent appeals to raw force have a degree of political legitimacy because they are consistent with Canada’s first principles. This story, in its unvarnished state, happens to be a lie. It does not accord with the facts. It is a legal fiction that does not take account of the complexities of Canada’s formation.

When Canada was forming, First Nations were promised that their political dealings with the British settlers would be mediated by the Imperial Crown in Great Britain. There was an original agreement, and it seemed to place First Nations consent at the heart of its process. This is known as the Treaty of Niagara, which celebrated its 250th anniversary in 2014. At the gathering, 2,000 Indigenous peoples representing 22 Indigenous Nations assembled in Niagara to create a relationship with the British Crown. Indigenous leaders entered into an agreement of peace, friendship, and respect in which Indigenous peoples received promises that settler governments would not have authority over them. The Mi’kmaq, Maliseet, and Passamaquoddy of the Maritimes had created a similar process. These arrangements were confirmed by the Royal Proclamation, which pledged the Crown to respect First Nations lands and governance. Though the Royal Proclamation also contained a darker colonial vision, it nevertheless contains solemn promises to ensure that local governments ceased molesting and disturbing Indigenous peoples. Under this vision, Canada was to become a peaceful place for “Indians” and foreign settlers, based on persuasion of the rejection of force. Again, this was largely premised on the view that First Nations leaders accepted a constitutional arrangement which precluded local governments from dealing with them in matters related to their land, governance, or resources.

This framework for dealing between peoples was entrenched in subsequent constitutional arrangements. It was a central provision in most of the treaties signed in southern Ontario and on Vancouver Island. This view seems to have been replicated more than 100 years later at Confederation. The more distant federal government was given responsibility for dealing with “Indians and lands reserved for Indians,” while the provinces were given control only over “[m]atters of a merely local or private Nature in the Province.” This procedure echoed and implemented the Treaty of Niagara’s arrangements — local governments (provinces) would be precluded from dealing with Indians. The English-speaking centralists with whom First Nations largely dealt reiterated this arrangement in subsequent treaties over the next 50 years. Throughout Canadian history, First Nations have largely held on to this idea. In this view, First Nations’ political and legal life has been built around one central fact: colonial, and later, provincial governments were forbidden from legislating in relation to their interests. Though there are many truths in the “treaty account” of Canada which have been grossly overlooked, in its pure form, this story also dabbles in legal fiction.

This is because, all the while, another colonial narrative was evolving — one that gave the colonies and provinces the upper hand. Colonies dispossessed Indigenous peoples despite the Proclamation. Subsequently, the successors to Canada’s original colonies, the provinces, became a major force in the country’s colonization. Indigenous peoples’ constitutional arrangements stood in tension with these decentralizing political forces.

In the 1950s, the process of subjecting Indigenous peoples to provincial law was extended through federal legislation. The federal government further departed from its treaty and Proclamation promises and resiled from its section 91(24) responsibility to protect First Nations from provincial governments and interests. It did so through the passage of section 87 (now section 88) of the Indian Act. This section forces Indians to abide by all laws of general application in force within a province. This makes First Nations largely subject to provincial legislation and regulates them without their consent. For example, section 88 of the Indian Act drastically constrains jurisdictional areas over which Indigenous peoples should have sovereign authority. It does so by delegating vast fields of political activity to provincial governments by referentially incorporating, as federal law, provincial laws of general application. This severely limits First Nations’ political power in Canada. It also creates very few incentives for the federal government to work with First Nations to pass legislation recognizing and affirming Aboriginal and treaty rights throughout the country.

The federal government’s “transfer” of legislative responsibility from itself and First Nations to provincial governments is a significant derogation from a First Nations–derived constitutional narrative. It is contrary to the Treaty of Niagara and the Royal Proclamation. It does not build the country on agreement, persuasion, and consent; it constructs the country on force. Assimilation and discrimination are the hallmarks of this narrative. Section 88 does not enhance participation when it makes provincial laws applicable to “Indians.” At a federal level, this allows the federal government to almost completely abandon its section 91 (24) constitutional responsibility concerning “Indians and lands reserved for Indians.”

By “passing the buck” to the provinces, the federal government avoids facing the consequences of its delegation of authority. First Nations must comply with the provincial laws which they have no real role in crafting or administering.

If First Nations cannot function as enclaves in Canada’s federation and their authority is subject to provincial laws of general application, they will largely be subject to other peoples’ authority and policy goals. This troubling regime, along with First Nations’ smaller size and their subordination consign them to this fate. In fact, this has been a prominent theme throughout the past 100 years as Indigenous peoples were forced to comply with other government objectives. The brighter narratives of agreement gave way to the darker stories of colonialism and assimilation. This is the state of Canadian constitutional law today. Indigenous peoples are very poorly served by the present order. They are subject to the force of other peoples’ political and legal will in most everything they do.

From The Right Relationship: Reimagining the Implementation of Historical Treaties, edited by John Borrows and Michael Coyle. Reprinted with permission from University of Toronto Press.