How author Sonja Larsen turned her scars into tattoos

By Sarah Dziedzic - Published on Aug 12, 2016
Sonja Larsen: The point of writing my memoir wasn’t to get distance from my childhood, it was to make meaning out of it.

At eight, Sonja Larsen looks like any other child clutching a teddy bear in one arm and holding the hand of a guardian in the other. Widen the scope, and that teddy bear is one of the only toys she can remember having, and the guardian isn’t a parent but an American 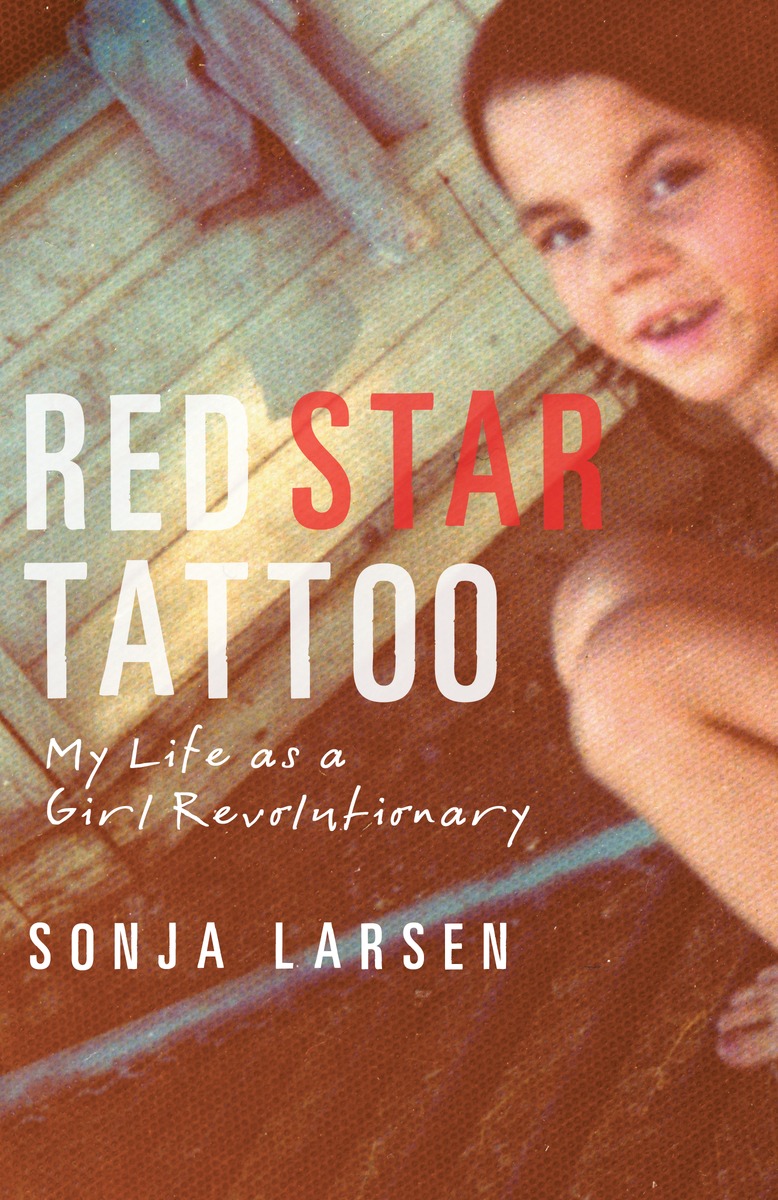 draft evader. They are hitchhiking to a commune in California while the rest of their counter-cultural crew, including Larsen’s parents, follow behind. From there Larsen’s life is anything but ordinary; it’s revolutionary. She chronicles her journey from hippie communities to radical communist organizations in her memoir Red Star Tattoo: My Life as a Revolutionary Girl.

Larsen lived and learned in alternative ways throughout her childhood and into adolescence. After her parents split up, she lived at times with her drug-dealing father in Montreal, and other times in various U.S. cities with her communist mother. Her mother’s commitment to revolutionary ideas rubbed off on her young daughter and ultimately led Larsen, at 16, to become a member of the Communist Party USA, Provisional Wing in New York.

Living in a Brooklyn brownstone, she and other “comrades,” including a manipulative and charismatic leader called Old Man (his real name was Gerald Doeden, then changed to Eugenio Mario Perente-Ramos), began preparing for a revolution they expected to occur on February 18, 1984. From early on in the organization, the phrase “after the revolution…” was used as a prefix for many conversations between comrades, and in letters exchanged with her mother. As the revolution date crept closer and the comrades were under greater pressure, Old Man became more erratic, and Larsen began to question the cause and commitment from group members – and her own.

Larsen eventually escaped the organization and now lives in Vancouver where she is a youth worker in the Downtown Eastside. In her adult life, and through the writing of her memoir, she confronted her memories — even the traumatic ones — in order to better understand herself and how her nonconformist childhood formed her.

Sonja Larsen answers five questions on writing her memoir and what it means to be a revolutionary.

What makes a revolution successful in your opinion?

Revolution is such a strange term these days. Even [Democratic Senator] Bernie Sanders uses it!  So I’m not sure. But I think it has to be something that captures the imagination of people, some kind of shared vision that people have a way to participate in, beyond just chanting slogans.

To be clear, I don’t think our organization had any of those things. But my other thought is that the seeds of a thing define what it grows into. At one point when I was in the organization, I remember thinking: What if it’s always like this? If it starts this way, how will it ever change? A violent revolution is going to have a struggle becoming a peaceful government.

When and why did you decide to write a memoir about your counter-culture experiences?

I think I always knew I might write about my experiences as a teenager. The Old Man [our organization’s leader] was like a character out of a book already, and I’d been interested in writing even before meeting him. I wrote a lot right after I escaped but part of me — a big part of me — just wanted to move on with my life. And so for quite a while I stopped. What was the point of writing if I was never going to write the one story I kept coming back to? But when I turned 40 I realized that on some level I wasn’t going to ever really move on with my life unless I let myself write this book. That the point wasn’t to get distance from my childhood, it was to make meaning out of it.

Can you describe what it was like throughout that writing process?

Incredibly rewarding and painful in almost equal measure. I took myself to some dark places, remembering a day or an event over and over again to find detail or context. But there was often an amazing feeling when I found it. Especially when that memory was of a time when I was small or powerless. There’s an alchemy that happens, I’d transformed something just by describing it, and so it was no longer just something that happened to me. Now it was something I owned. Like I was turning my scars into tattoos.

How did you choose your memoir’s end point?

I’d been working on the memoir for quite a while, struggling with an ending. From the start I’d been very reluctant to write about my life as an adult. I had no idea how to connect my childhood to where I was now. But I knew the minute my mother gave me the box of all our letters over the years that this scene of carrying the box, the literal weight of these memories and this thread of ambiguity, of not knowing if my mother was giving something to me or just getting rid of something for her, was part of the answer. As soon as I got the box I thought, "Of course I couldn’t find the end before, because it hadn’t happened yet."

Were your family and friends supportive of your book?

Beyond anything I could have hoped for. But I was very careful not to hope anything at all. My parents didn’t even know I was writing a book until they saw it in an author bio in a magazine. It was important to me not to ever feel like I was asking for permission. To write a memoir you have to believe that it’s your right to talk about your life, and rights can’t be negotiated. And I’m very grateful to my family for understanding that, and also for wanting the best for me as an artistic person.

Every breath I took I could feel the small protest in my lungs. Nothing was simple anymore, not even breathing.

The following is an excerpt from Red Star Tattoo, as Larsen thinks about the dangerous situation she is in at the organization.

Outside the world was white. I sat by the window and watched the snow fall over Crown Heights. The courtyard below was white and clean as though no one had ever walked there before. I felt high from all the Sudafed I was taking. I’d had bronchitis for weeks. Every breath I took I could feel the small protest in my lungs. Nothing was simple anymore, not even breathing. I took another pill.

Across the courtyard I thought I saw a man watching me from behind a pair of red curtains. Some days I thought I could see the flash of a gun. There were less than a hundred days left.

I turned back to look at the room. Mary T was sitting in the corner, reading over the polemic one of the field liaisons had typed up. She rubbed at the side of her face, in a distracted kind of way, running her fingertips over the bruises on her cheekbone. In parts, it was a dark wine purple, and others, a softer burgundy.

What had she done to make the Old Man so angry? I’d only ever seen people with bruises like that when they were caught trying to leave. There had been a few of those, runners caught halfway down the street. But no one in leadership, not even Polly, whose legs and back had been struck with the whip, had ever shown a bruise before — but then she only took showers late at night when everyone else was asleep. I couldn’t imagine Mary T either trying to defect or being stupid enough to get caught. But still she had the only thing I would have punished her for, that small half-smirk. Only Mary T could wear a black eye like a mark of status.

The empty courtyard. Mary T’s hands on the bruise. The flutter of the curtain. Once you started watching you could never stop.

Who was it that was watching me watch them? The NYPD, the FBI? Who knew about us, about what we did in this house, this house we called safe?

Coronavirus
Banned camp?: Ontario camps are running out of time to save the summer
John Michael McGrath