How a radical idea turned Loblaws into a supermarket empire

In 1919, the concept of plucking your own products from grocery-store shelves was pretty out-there. But an Ontario man named Theodore Pringle Loblaw saw promise in it
By Jamie Bradburn - Published on Jan 15, 2019
A postcard featuring an image of Loblaw Groceterias, which opened at 2923 Dundas Street West, in Toronto, in June 1919. (Loblaw Groceterias Limited/wikipedia.org)

Here’s what it was like to pick up groceries in Ontario in 1919: You’d visit a small store. You’d select the products you wanted — they were kept behind counters or measured out from bulk barrels — and clerks would assemble your order. But the shopping experience was about to change.

Self-service, introduced by Piggly Wiggly in Memphis, Tennessee, three years earlier, was a radical idea, but Toronto grocer Theodore Pringle (T.P.) Loblaw saw promise in it. He’d worked in the industry since arriving in the city as an 18-year-old in 1890 and opened his first store in 1910. That store grew into a traditional full-service grocery chain, Loblaw Stores, which he ran until early 1919, when he withdrew from the business to work for the United Farmers of Ontario (the stores were soon sold and became some of the earliest locations for future rival Dominion). Through trips to the United States, he was introduced to the new model, which passed savings on to customers through reduced labour costs and suited shoppers who didn’t have time to wait for service.

When Loblaw Groceterias opened at 2923 Dundas Street West, in Toronto, in June 1919, customers got a taste of a whole new way of doing business. After entering through a turnstile, they picked up a basket. “Out in front,” Canadian Grocer reported in December 1919, “the shelves are packed with bottled and canned goods, whose names are household words, all plainly tagged with price. Further back, one finds teas, coffees, fancy biscuits and cheese, all wrapped ready to carry home, each package bearing the quantity, price per pound and gross amount, so that it is never necessary to consult the salespeople.” In the middle of the store, shoppers could find dried fruits and refrigerated goods; the back contained items ranging from flour to soap. After selecting their own items, customers then went through a checkout, where their purchases were bagged.

The company expanded across Ontario throughout the 1920s and launched divisions in Buffalo and Chicago. An ad promoting Loblaw’s debut in London, on December 18, 1925, touted the advantages of its self-service concept: “Careful and efficient buying in large quantities and selling through our self-serve, cash and carry system, reduces our overhead expenses to a minimum and enables us to sell high-grade food products at surprisingly low prices. You will be delighted with the Loblaw Groceteria — its cleanliness, its neatness, its conveniences will appeal to you. Selection of goods will be easy; you may take your own time to choose your favourite brands; no one will urge to buy — in short, shopping will become a source of pleasure. Keen buyers, bent on making the income go as far as possible, are especially invited to our opening. Come, look around, examine the goods; all are plainly marked at our low Groceteria prices.” 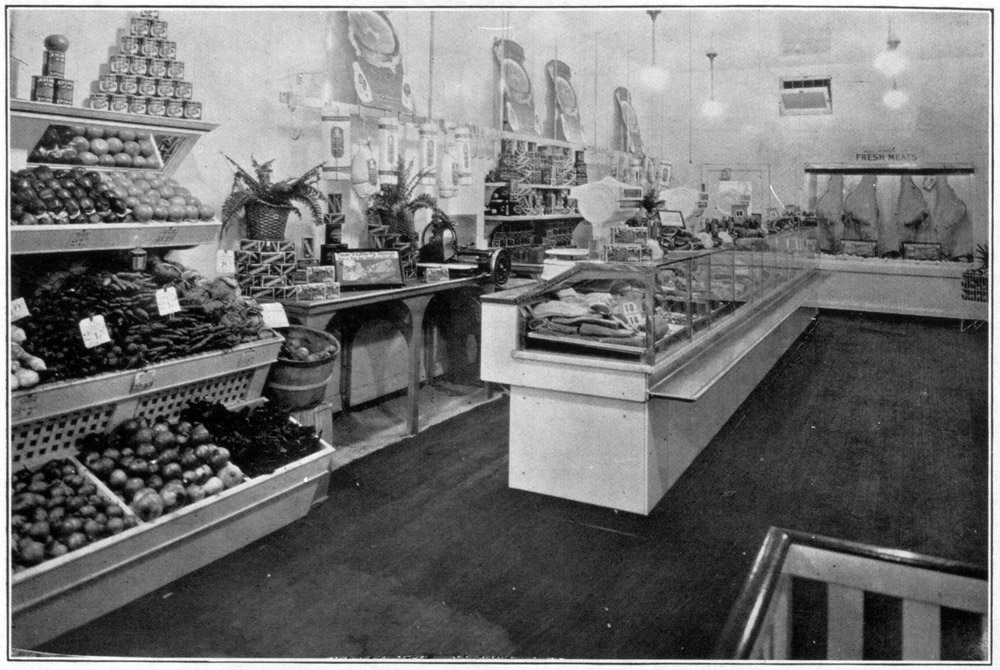 More than 6,000 customers passed through the turnstiles on the store’s first day of business.

In October 1928, the company opened a $1.5 million art deco head-office complex at Bathurst and Fleet streets in Toronto. The site included administrative and warehouse space, bakeries, food-packaging facilities, a coffee roastery, a railway siding, and recreational facilities for employees (including a bowling alley and a performance hall). Tours were offered to the public.

T.P. Loblaw, though, was unable to attend the opening: he’d fractured his thigh that summer after being thrown from a horse. Having nearly died from pneumonia soon after, Loblaw re-evaluated his financial holdings. He decided to sell some of his shares in order to ensure that the company would survive him and to raise funds for American operations, providing an option to New York-based financiers Merrill, Lynch and Company. In fall 1929, they worked out a deal to merge Loblaw Groceterias with Dominion: Dominion president William Pentland would run the combined companies, while Loblaw would serve as chairman of the board. Although Dominion shareholders approved it, the stock-market crash that October, combined with Loblaw’s improved health, killed the deal.

In 1932, the chain tested a new concept dubbed the “Meateteria.” At six Toronto stores, customers could purchase cellophane-wrapped meat from a refrigerator case — no need to make a stop at a butcher counter. The following year, a new store at Bloor and Brock streets, in Toronto, offered features such as mechanical water sprays to keep produce fresh. 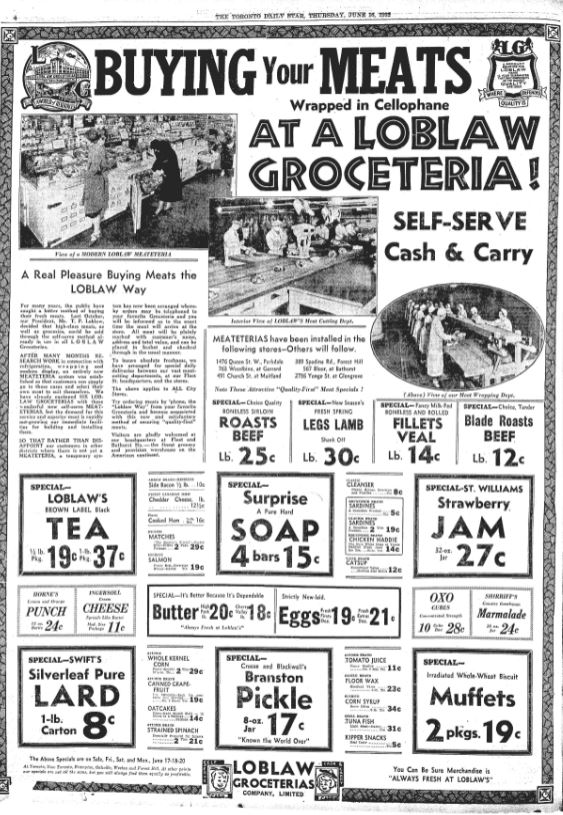 Loblaw directed his fortune toward philanthropy. In 1926, he donated $100,000 to establish Stevenson Memorial Hospital in Alliston, the community he had grown up near and in which he maintained a farm. Three years later, he and his longtime business partner, John Milton Cork, donated $1 million for a new building for Toronto Western Hospital. He served as an executive with Toronto branches of the Kiwanis Club and the YMCA and later willed his money to establish programs for underprivileged young men.

In 1933, during the last months of his life, Loblaw underwent a spiritual rebirth after encountering the philosophies of the Oxford Group, which believed in a close relationship with the Christian god. He spoke at numerous churches and charitable institutions, such as Salvation Army hostels, to spread the word of his awakening. In his final journal entry, written a few days before he died of meningitis on April 2, Loblaw wrote, “Going over the top by a complete surrender of your life to God would mean honesty in commerce, sincerity in the Church, sympathy between employer and employee, purity and common decency in social life, idealism and earnestness in politics.”

At the time of Loblaw’s death, the chain had 107 stores in Ontario and 50 in New York State (the company remained active in the United States until it sold off its National stores in New Orleans and St. Louis in 1995). Cork assumed the presidency and ran the company until 1947, when he sold a large block of shares to food mogul W. Garfield Weston, who held control of Loblaws by the time Cork died in 1957. A century after its first store opened, Loblaw Companies operates more that 2,300 corporate and franchised stores under numerous banners across Canada. 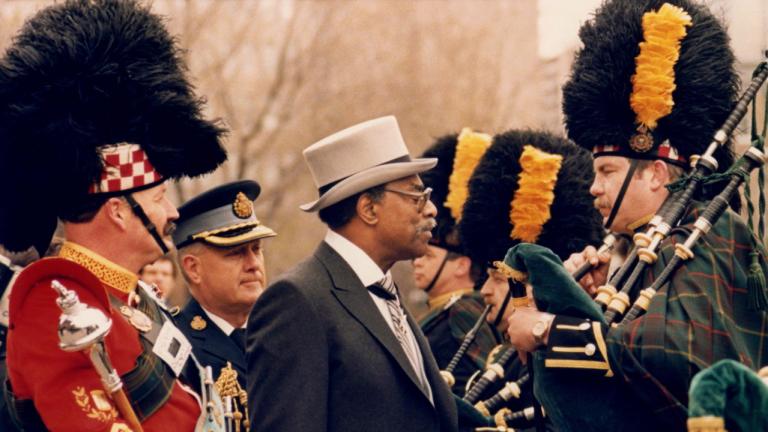