By Nam Kiwanuka - Published on Jul 21, 2016
Felix Monserrate and his horse, Zippy Chippy, were possibly the two most stubborn players in thoroughbred racing. (Emily Schoeneman)

Not many of us – or any of us, really – would want our legacy to be one of losing or failing in life. 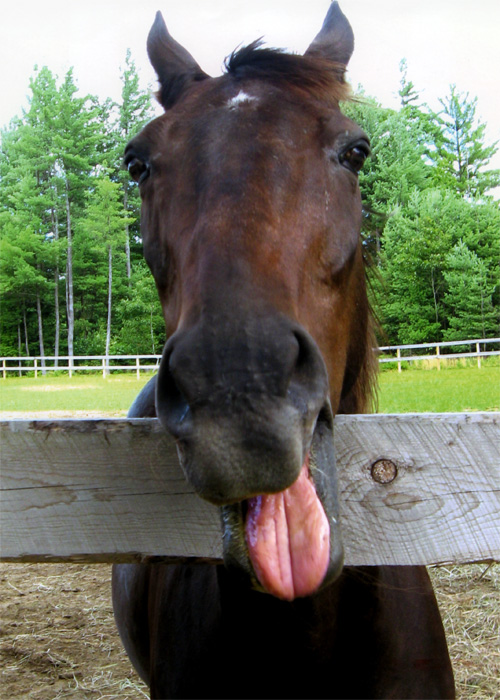 But for Zippy Chippy, his notoriety as the most losingest thoroughbred in racehorse history is why the 25-year-old bay gelding has legions of fans across the world.

In The Legend of Zippy Chippy, Life Lessons from Horse Racing’s Most Lovable Loser, author and humourist William Thomas chronicles Zippy’s ascension, or rather, decline, into the history books. Thomas writes:

“Stupendously, at the turn of this century, a racehorse by the name of Zippy Chippy became America’s greatest attempter. Glorious was this horse in failure, tireless in the trying game. There was no winning, no cheating, no million-dollar contract for this remarkable athlete, because when all was said and done and put out to pasture, he was the great Zippy Chippy – a record-setting, always-struggling, full-striding scoundrel who became the best thoroughbred in professional racing at stealing people’s hearts.”

While other horses won millions in their careers, Zippy Chippy lost 100 races and earned a paltry $30,834 in his 10 years of racing. This is despite the fact that some of his ancestors were such successes as War Admiral, the 1937 Triple Crown winner, and Northern Dancer, who in 1964 was the first Canadian thoroughbred to win the Kentucky Derby.

Zippy managed to lose most of those races under the guidance of his trainer, Felix Monserrate, who stuck with his horse even though others suggested he send it out to pasture, Sopranos-style.

“No, he wanna run, he’s always ready to go,” Monserrate would say. “But he don’t always go too good.”

In an interview for The Agenda in the Summer, Thomas told me, “I think Felix saw a lot of the horse in himself. They were both stubborn, they both wanted to win, they both had their own way of doing things and they never gave up. And I think he became a pet project, the keyword being pet.”

In his book, Thomas writes of the love between horse and trainer, even though Zippy seemed to enjoy tormenting Monserrate.

When the world says, ‘Give up,’ Hope whispers, ‘Try it one more time.’

“They bumped along like that – the cocky, underachieving racehorse and his cockeyed, optimistic trainer … They were standing in front of the horse’s stall when Felix turned to pick up a bucket, and Zippy turned to pick up Felix. The trainer found himself suspended in midair, yelling for help and flailing his arms around behind him, trying to get Zippy to release him. Zippy had picked him up by the collar and was holding him a foot off the ground. Felix’s angry shouts at the horse to put him down were answered by the loud laughs of a few track people watching the two of them perform this shed-row slapstick act. The louder Felix screamed, the more raucous the laughter of the bystanders, many of them workers now coming over from other barns. Eventually Zippy got tired of the gag and put his owner down. ‘He’s a strong horse,’ Felix said, now that his feet were back on terra firma. ‘He can hold you up for a long time.’ Forget Man o’ War and Bold Ruler; Zippy Chippy’s most influential ancestors may have been Laurel and Hardy!”

Owner and trainer Felix Monserrate and his horse, Zippy Chippy, in 2010.

Zippy Chippy did make some money with special appearances that drew plenty of fans, and in 2000 People magazine named him one of the year’s most intriguing personalities. Today, he is retired, living out his days on a farm near Saratoga, N.Y.

Zippy’s story is very much an underdog’s story, and I asked Thomas what it is about the little guy that appeals to us. “I think it’s because we’re all little guys. Felix always said people related to Zippy. They presented him with cards saying, ‘Keep going, Zippy’ and ‘Don’t ever give up,’ or ‘Zippy, I feel for you, I just lost my job today.’ It was always about hope. And I can tell you, at the track on most days in those barns there’s more hope than hay.”

Thomas writes with such an ease that leaves you laughing and cheering for Zippy and Felix. It’s not just a book about this unlikely relationship. It’s a story that demonstrates that no matter what obstacles come before you, the most important thing that you can do is to keep going and keep trying. Don’t quit. Above all, winning at all costs isn’t what we should aspire to. It’s okay to be the underdog and as Zippy did, stop and smell the flowers – even if it’s in the middle of a race.