Hidden no longer: Women and visible minorities in science and math

History has finally discovered three Black women who laid the mathematical groundwork for John Glenn to orbit the earth — but many groups are still underrepresented in scientific fields. Meet some Ontario organizations trying to change that
By Nam Kiwanuka - Published on Jan 13, 2017
Tech Spark is a technology and design program that aims to increase digital literacy in marginalized communities. (Photo courtesy of Tech Spark)

More than 50 years after John Glenn became the first American to orbit the earth, the movie Hidden Figures tells the story of three Black American women who played a vital role in that mission for NASA. Known as “human computers” these mathematicians did work that was imperative to NASA’s success, and they did it in a time when a person’s potential was judged by their skin colour and men dominated scientific fields. These stories should have been celebrated a long time ago, but were erased from history until now.

Unfortunately the underrepresentation of women and visible minorities in what is now called STEM (the fields of science, technology, engineering, and mathematics), and especially women of colour, isn’t just a matter for the history books. Which is why today, in Ontario, there are several local organizations working to correct that gap, starting with mentorship programs that — like Hidden Figures — provide inspiration by example.

When Tamar Huggins Grant came up with the idea for Tech Spark — a technology and design program that works to increase digital literacy in marginalized communities  — she was told by people within the Black community she wouldn’t receive funding if she overtly targeted them for donations, and that in order to be successful she would need to partner with a white woman or man.

Starting this September, Tech Spark’s curriculum will be implemented in select Toronto public schools in high-need neighbourhoods — something that Huggins Grant has been working towards since she launched the organization in 2012, despite those warnings, and with the help of funding from the Ontario Trillium Foundation.

While Tech Spark offers workshops and programs for youth, women, people of colour, and newcomers, having its curriculum within the school systems will allow it to reach students who might not be able to afford it or attend otherwise. “It could be a challenge to travel,” she explains. “It could be a challenge for parents to pay … so having enough funding to be able to run programs like this for free is extremely important for us.”

While the people who initially discouraged her were both Black, Huggins Grant hopes her success will demonstrate that it can be done and that, in turn, will encourage others to try.

“Representation is extremely important,” she explains. “When they see me as the founder of Tech Spark, a lot of these young black girls are so shocked and amazed that someone that looks like me is also interested in technology … A lot of young people think that Black people don’t do tech, but when they see professionals who are successful … they feel like they can do it as well … It’s extremely important for them to see the possibilities.”

“Hidden Figures is such an important movie, and it came out at such an important time too,” says Doina Oncel, Founder of hEr VOLUTION, a non-profit that encourages girls and young women, particularly from economically marginalized communities, to 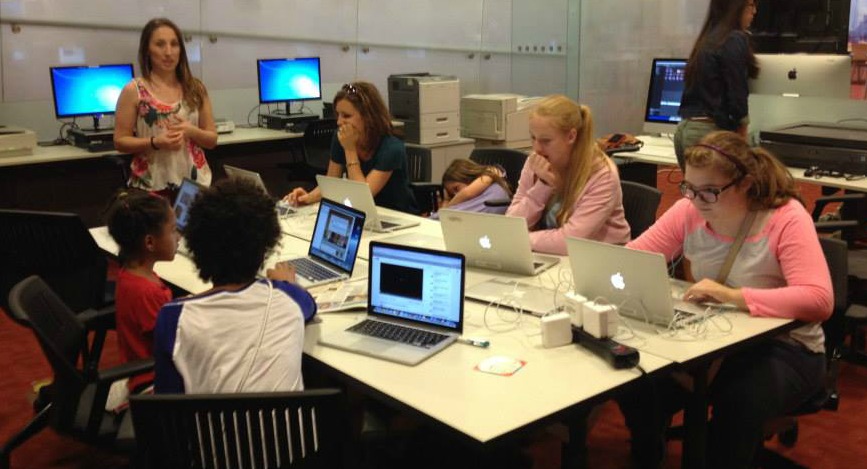 pursue careers in STEM. “The movie reflected resiliency and that women, particularly women of colour, did not allow obstacles from their time to stop them from [pursuing] their dreams.

"People from low income, new immigrants, and visible minorities do not have the same privileges as people from middle class,” she explains. “I thought it would be a great idea to have an organization to not only focus on closing the gender gap for women in STEM but to also look at [poverty and diversity].”

The effects of having so few women and visible minorities in STEM are still pervasive enough that they can squelch efforts to improve things: Oncel didn’t tell her mentor about her idea to create hEr VOLUTION for a year. “My fear was that I wasn’t a woman in STEM [myself] and felt as if it wasn’t my place to get involved,” she says. But then her mentor told her that “if a woman in STEM was going to do something, she would’ve done it by now.”

Huggins Grant says mentors were particularly important in her own development, especially when people told her she wouldn’t succeed because she's Black. “They really gave me a lot of encouragement to combat those negative comments that I would hear,” she says. “They’re very passionate individuals about technology, about equality and fairness when it comes to technology. So that passion is what rubbed off on me when I would start to doubt myself.”

Saadia Muzaffar, on the other hand, founded TechGirls Canada out of exasperation, because she didn’t really have a support system. (Disclosure: Muzaffar has written for TVO.org.) “TechGirls Canada was borne out of pure frustration of being not only a woman in tech, but also being a woman of colour and finding that there was not nearly enough recognition of this lack of diversity,” she explains. “There was a gaping void when it came to addressing the dismal representational statistics for the additional intersections of race, queerness, varying physical and mental abilities, or Indigenous identities.”

As a way to shine a spotlight on women from some of those overlooked communities and women who had broken barriers in the fields of STEM, Muzaffar created a gallery called Portraits of Strength on the TechGirls website.

“Portraits of Strength was our answer to only seeing white women recognized for their achievements and careers, and that too after 20 or 30 years into their careers,” she explains. “We wanted to highlight Canadian women in a series that looked like our Canada.”  They also built in a positive-reinforcement system, she adds: “If you were featured, you would be asked to find and nominate a woman in your own network. The result was this kaleidoscope of unusual and ambitious women we would have never found in a traditional way.”

A lot has been written about why it took so long for the story of Hidden Figures to be told. And even though it was being shown in fewer theatres, it beat out Rogue One to become the top-grossing movie last weekend. It may become a catalyst to encourage more young women of all races to pursue careers in STEM. After all, not only are we capable, we’ve been doing it all along.