Getting out the millennial vote

This year, turnout for the Ontario provincial election was higher than it had been in almost two decades: 58 per cent of registered voters went to the polls — an increase of nearly 7 percentage points over 2014. And for the first time, millennials represented the largest group eligible to vote.

For some, June 7 marked the first time they’d ever cast a ballot.

“As I got older, politics became more of an everyday conversation,” says Malissa Waithe, 29, from north Toronto. “You’d get to work and listen to people talk about it. I guess that got me interested.”

Today was my first time voting since being eligible to vote 11 years ago. ? #Toronto #didyouvote #45minsleft

Waithe says an older colleague urged her to start thinking about the race. She watched political coverage, read online articles, and scanned comment sections so that she could make an informed decision.

“I felt a little better after voting,” Waithe says. “I felt that I had done my part.”

In Ontario, there are more than 3.5 million eligible voters between the ages of 18 and 34 — or 36 per cent of the total voting population — but they don’t always make their voices heard. 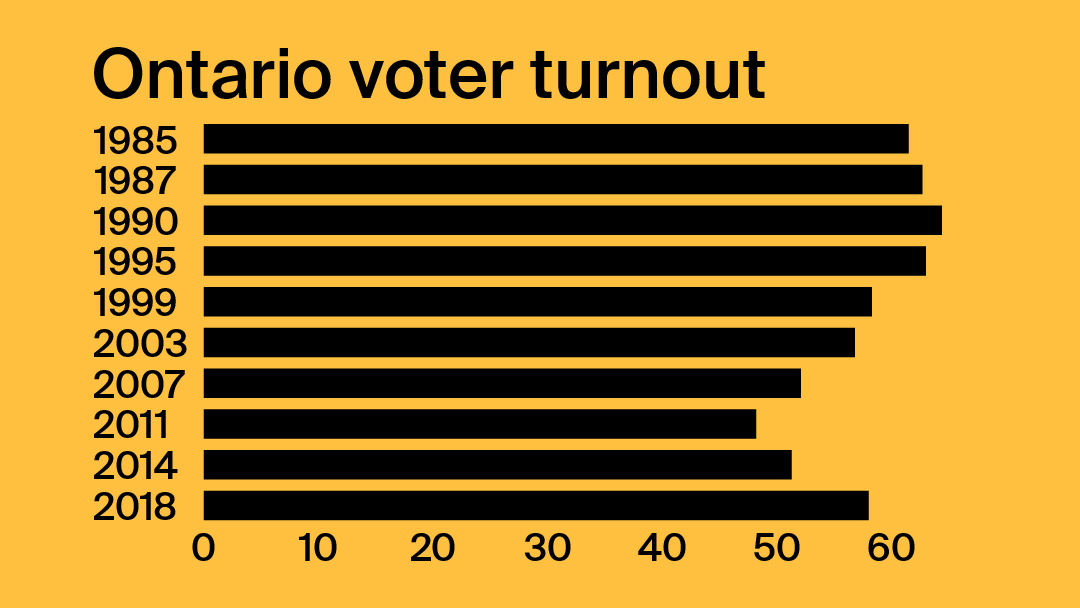 Various groups and organizations are trying to increase turnout. In the lead-up to the election, Elections Ontario visited more than 50 campuses across the province to provide information about the process and encourage students to vote. It also ran a video campaign urging 16- and 17-year-olds to add their names to the Ontario Register of Future Voters so that they will be able to more easily cast their ballots when the time comes. The Ontario Undergraduate Student Alliance urged young people to use the Twitter hashtag #StudentsVote to declare their intention to go to the polls.

And political campaigns are paying attention to this pool of potential voters.

During the recent campaign, the major provincial parties were active on a variety of social-media platforms — most of which tend to be more popular with 18-to-34-year olds than with other age groups. On Twitter, the hashtags #AskKathleen and #AskAndrea were used as direct lines to the party leaders. Ford Nation Live streamed live events from the campaign.

But while young people may be associated with social-media savvy, Audrey Steinburg, for one, still turned to traditional news sources for information in the lead-up to June 7.

“Seeing stuff on Twitter contributed to my knowledge, but I tried to keep with official sources as much as possible,” says Steinburg, 18, from Barrie. “I tried to look more at the local representatives and watch the debates.”

Throughout high school, she remembers, she’d talk to her friends about provincial and federal political issues. This past year, her first at the University of Toronto, she was particularly interested in what the parties had to say about post-graduate education.

“I looked at entire platforms, but stuff for students, like financial aid and accessibility within universities, were important,” Steinburg says.

Young people are often characterized as apathetic when it comes to politics, but, Steinburg says, “We have the duty to vote,” adding, “A lot of the people I surround myself with do see the importance and value.”

Katelyn Conferido, from north Toronto, refers to apathy as “a scary thing,” because “whatever level of government you’re voting for will affect you.”

Conferido, a student at York University, turned 18 last September. This year’s provincial contest was the first election she was eligible to vote in, and she jumped at the chance. Even before she was old enough to vote, she used to go with her parents to the polls.

“Getting a glimpse of the voting process, even before I could cast a ballot myself, was a positive experience,” she says.

She points to a lack of education as one reason some young people never reach the ballot box.

“You’re only obligated to take one half-year course in Grade 10,” Conferido says. “Regardless of what job you’re going to pursue in the future, government and politics will be a constant for you. But it was never taken as seriously as English, math, or science.”

“A municipal election is just as important as a provincial election,” she says. “It’s the base level. It’s where everything starts. Unfortunately, a lot of people don’t take it as seriously, and it’s not as talked about.”

Correction: An earlier version of this article incorrectly stated that millennials now represent the majority of those eligible to vote in Ontario. TVO.org regrets the error.