Ontario is the world’s largest exporter of American ginseng to China — but disease and trade disputes are putting the lucrative industry at risk
By Mary Baxter - Published on Oct 31, 2018
Since the late 1990s, ginseng growers in Ontario have had to contend with two price collapses and the near financial ruin of a major buyer. (Mary Baxter)

TILLSONBURG — Remi van de Slyke digs into the hilled row of his ginseng garden and pulls out a gnarled off-white taproot. It smells acrid and a little like one of its distant relatives, the carrot. Unlike the carrot, though, it’s worth a small fortune.

Ginseng goes for $20 to $40 a pound wholesale, van de Slyke tells me (compare that to carrots at a mere 25 cents a pound). His crop — about 32 hectares’ worth on this farm near Tillsonburg and more in two nearby locations — is destined for China, as is about 95 per cent of Ontario’s crop, which is grown entirely on the Sand Plains, north of Lake Erie.

Ontario has been the largest North American exporter of American ginseng to China for decades. Since the late 1990s, growers have had to contend with two price collapses (one in 2001 and the other in 2008) and the near financial ruin of a major buyer, but they managed to survive and prosper. Now, though, the industry’s 150 growers are facing their greatest challenges yet: dwindling access to land due to an untreatable disease, and the prospect of being shut out of their primary market. 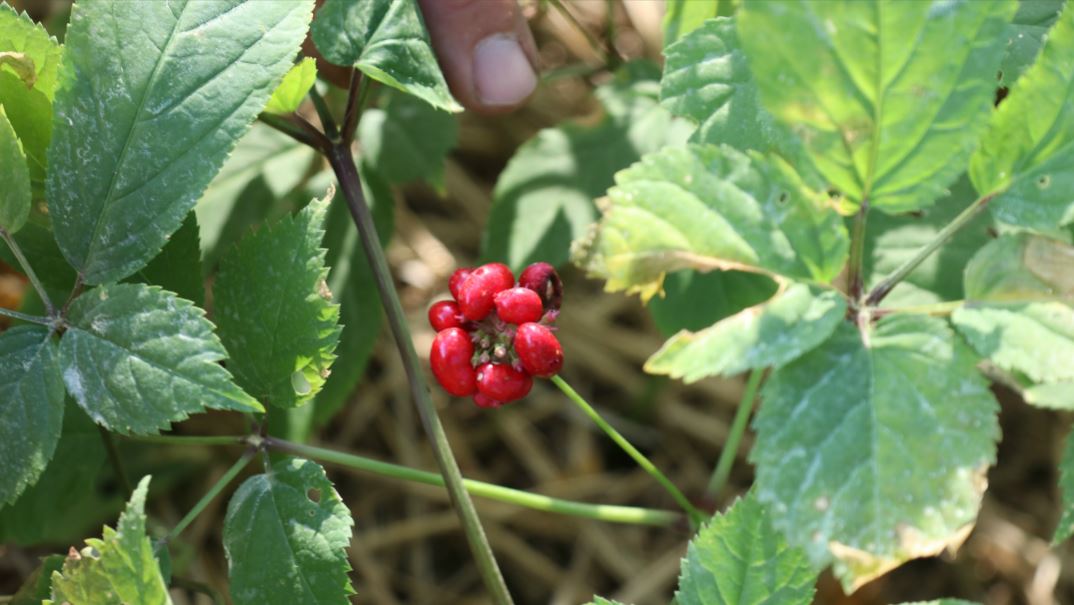 American ginseng is a perennial herb. Above ground, it resembles an ornamental garden plant. Native to the forests of the Great Lakes and St. Lawrence River regions, the root was traditionally used by Indigenous people to improve mental faculties and fertility. The species is similar to Asian ginseng; in China, both varieties are believed to, among other things, reduce inflammation, enhance blood circulation, and improve male virility. In 1715, a Jesuit priest in Ontario noted the similarities between Asian ginseng and the North American herb, and soon after, exports were on their way to Hong Kong. The trade in wild ginseng once rivalled Canada’s fur trade; by the late 19th century, supplies of wild ginseng dwindled due to over-foraging, so farmers began to cultivate the plant.

Van de Slyke and his brother started cultivating ginseng in the 1990s; like other former tobacco growers, they’d been left searching for another high-value crop after demand for that plant plummeted in the ’80s. By the late ’90s, Ontario had become the top ginseng producer in North America. Today, ginseng is the province’s most valuable field-grown horticulture crop: between 2014 and 2017, an average of 2,700 tonnes were exported each year, generating roughly $280 million in revenue annually, according to the Ontario Ginseng Growers Association.

But ginseng can be a tricky plant to grow. Frost and hail can take out an entire crop, wrecking the expensive shade system that mimics the plants’ native forest environment. A late spring frost four years ago, van de Slyke says, “pretty much smoked everything.” And ginseng is vulnerable to disease and pests because of its four-year growing period. (Most field crops are harvested annually.)

Growers such as the van de Slykes also have to contend with another complication: you can’t plant ginseng in the same place twice — doing so causes so-called replant disease, which researchers believe is the result of fungal plant pathogens that promote root rot. And the only area in the province with the temperate climate and well-drained sandy soils necessary for the plant to thrive is the Sand Plains, which occupy most of Norfolk County as well as portions of nearby counties. Research conducted last year by the Ontario government’s ginseng specialist indicates that growers will run out of land within 25 to 30 years.

Carl Atkinson, who heads the grower association’s research committee, says scientists are working on a cure and that the association is waiting to hear whether the federal government will fund a five-year research program. “I don’t think we’re going to have all the answers [in the next five years],” he says, “but we’ll definitely be in a better position to direct our growers.” A spokesperson for federal agriculture minister Lawrence MacAulay’s office says the government will make a funding announcement soon.

The trade war between China and the United States creates more uncertainties. Marcus Cheng, buyer for Sun Ming Hong (Canada) Ltd. — a company that sells ginseng to Chinese processors and retailers — says a related 10 per cent drop in the Chinese currency international exchange rate may reduce demand for ginseng: those further up on the supply chain may find it more difficult to afford high-priced imports. Buyers may also start avoiding Canadian ginseng, he adds, because of fears that tariffs on U.S. ginseng will eventually extend to the Canadian product.

A clause in the new United States-Mexico-Canada Agreement requiring countries to notify each other when beginning trade talks with a “non-market” country promotes the latter concern, Cheng says, because of its potential to escalate and expand the trade war.

Ontario growers do, though, have an edge on their competitors. Practitioners of Chinese medicine place high value on plant species grown in their native environments, believing the native soils and climate improve the quality of the root.

The province’s growers are also pushing into new markets: over the past year, the Ontario Ginseng Growers Association has received nearly $800,000 in federal funding to support expansion efforts in existing and emerging markets in Asia.

Van de Slyke, despite his concerns about the future of the industry, still marvels at how it came to be in the first place: “Here we are in this little area of Canada. We’re growing this crop. It all gets exported to Asia; they love our ginseng. How does that happen?”

Correction: An earlier version of this article stated that the wholesale price of ginseng was $40 to $80 per pound, when it is in fact $20 to $40 per pound. TVO.org regrets the error.

Politics
What’s ON: The week that was in Ontario politics (October 12-15)
Daniel Kitts