For the love of salmon

Volunteers are donning waders and long waterproof gloves, preparing to wade into the shallow but frigid waters of a Caledon-area creek. It's an overcast Saturday in late January, and the volunteers are handling delicate cargo: pea-sized, translucent orange globules, each with a single dark spot in its centre, contained in common reusable plastic kitchen containers. They are salmon babies, and they’ll be turned into living “lasagna,” layered with stones and small pebbles inside nurseries fashioned from short lengths of PVC 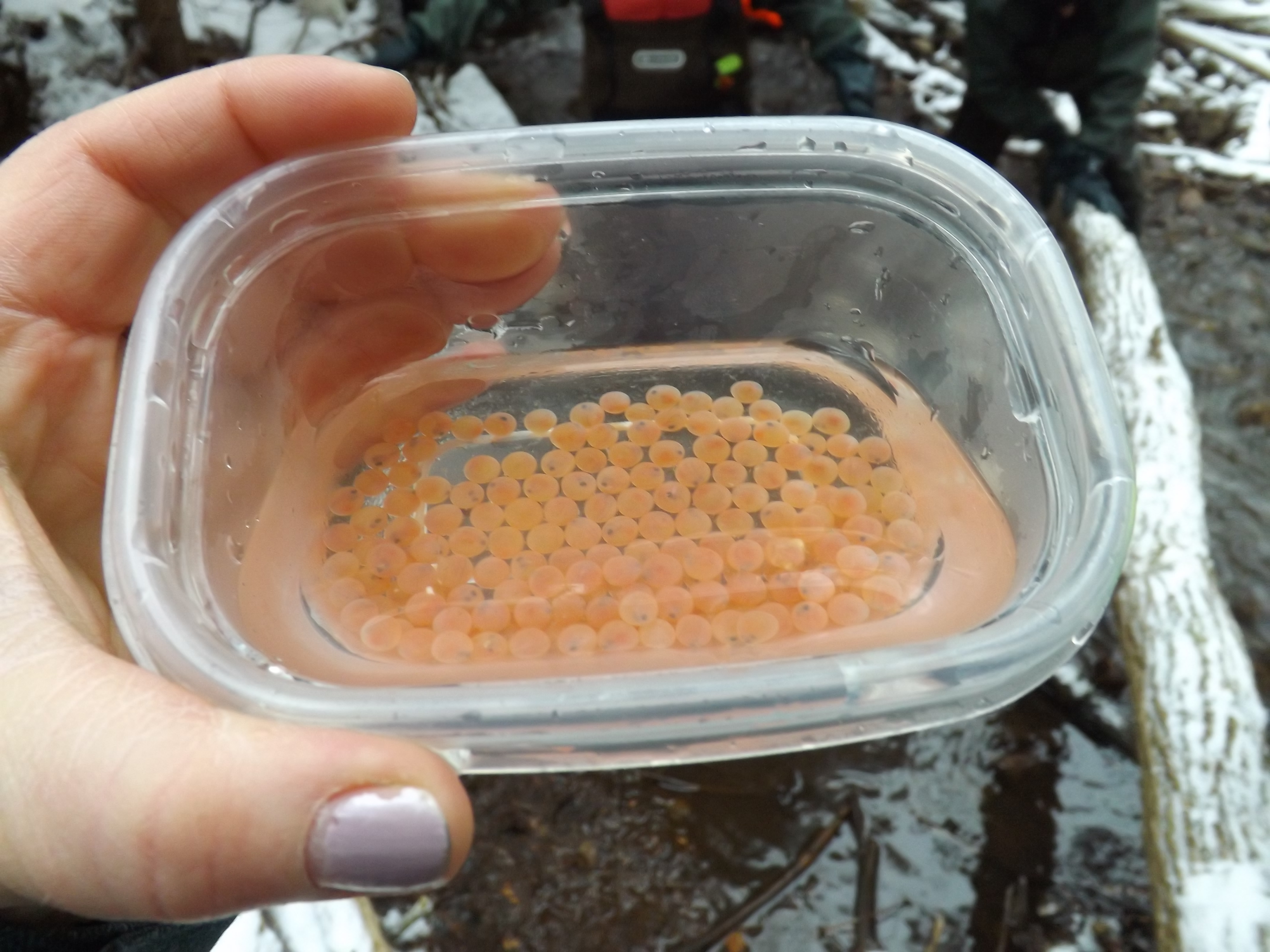 pipe with screens over the openings.

The Don, Credit, and Humber rivers were once famous for their salmon. Early European arrivals including Elizabeth Simcoe (wife of Lieutenant-Governor John Graves Simcoe) marvelled at the bounty and quality of Lake Ontario salmon, which ranged from the St. Lawrence as far as Niagara Falls. They generally adopted the spear-fishing method used by First Nations. But by the mid-1800s, as net fishing became more common, people who had once claimed you could even fish salmon from the riverbanks with a shovel or a rake began to notice stocks were diminishing.

In 1867, salmon failed to return to the Trent River and, according to pioneering conservationist Charles Sauriol, the last-known salmon in the Don River was caught about 1874. Within decades, the once-copious fish had entirely vanished.

A volunteer-fuelled initiative called the Lake Ontario Atlantic Salmon Restoration Program is beginning to change that.

“We bury them slightly in the substrate at the beginning of the year, in January or February,” explains Krystal Athanassiou, project coordinator with Ontario Streams, a partner organization in the project. “I’ll check on them once a week, and then in late April or early May, depending on the weather, I’ll go out with another round of volunteers and some of our summer staff and open up those incubation tubes and count our success.”The salmon were lost due to overfishing, she says, as well as “excessive deforestation [that] degraded the habitats they were living in.” Salmon return upriver to spawn in the same place they hatched from, so “dams and mills became barriers to their spawning. “1896 is when they were officially declared extirpated.”

For decades, the only salmon in the Lake Ontario watershed have been transplanted Pacific species like Chinook and Coho (stocked as early as the 19th century for sport fishing), as opposed to the native Atlantic salmon that were once so plentiful. But there are both environmental and recreational reasons to bring back the Atlantic salmon. “We want to reintroduce them because they’re a very popular sport fish,” Athanassiou says. “They’re also a really important predator for Lake Ontario and its watershed.”

In the mid-19th century, some attempts were made to protect salmon habitat, but they weren't enough to restore the fish population. The New York State Department of Environmental Conservation began stocking Atlantic salmon in Lake Ontario in 1983. The Ontario Ministry of Natural Resources started research into Atlantic salmon reintroduction in 1987, with modest success, which paved the way towards the current program.

The current program, which began in 2007, is a partnership among more than 40 organizations headed by the Ontario Federation of Anglers and Hunters (OFAH) and Ontario’s Ministry of Natural Resources and Forestry (MNRF). It’s showing better results.

“Efforts have been really ramped up,” says Athanassiou, adding that in 2016 OFAH and MNRF research showed that Atlantic salmon had begun to reproduce independently in the Lake Ontario watershed.

Her organization plays a vital part, engaging volunteers to deposit salmon eggs into nursery areas. It’s a challenging task, but the hands-on process of setting out those nested eggs rather than releasing hatched fish may be important to the program’s success. “The theory is there may be some kind of imprinting [storing a memory of the location] that happens that allows them to get back to this stream; that’s not a fully understood process.”

Every year’s efforts are measure and monitored, and accompanied by improvements to the shoreline, like removing barriers to spawning fish and planting shrubs and trees to shade the water and control erosion (sediment from erosion can smother the developing eggs).

“As we improve the rivers for the salmon to come back, it has a beneficial impact on all species that are living in that habitat — mammals, birds, fish, bugs, all of them,” says Athanassiou.

Paid staff are important, but the volunteer input is invaluable.

Health-care worker Richard Dabrowski took part in the latest egg-stocking event with his two children, Jelyssa, 14, and Richard Jr., 8. They seemed undaunted by the slippery creek-side footing or the chill of the shallow, icy stream.

“We participated in the salmon runs in the past, both at Highland Creek and at Duffins Creek in Durham Region," Dabrowski says, "and so we thought this was a natural progression, to see the initial cycle of the salmon, in the egg stage.

“We’ll be back in the spring with Ontario Streams to pull out the tubes. For my two kids, it’s extremely educational. As a father, I think it’s important that I expose them not only to the act of being a good volunteer in the community, but also to do their part to ensure we’re supporting nature, supporting life and understanding the ecosystem.”