For many Ontarians, the pandemic is over. Now what?

OPINION: Millions of Ontarians are fully vaccinated, and millions more are well on their way. But before we get too excited, we’ve got to figure out the next few months
By Matt Gurney - Published on Jun 28, 2021
The author receiving his second dose of the Pfizer COVID-19 vaccine on June 14. (Courtesy of Matt Gurney)

By the time you read this, my pandemic will be effectively over.

When this whole damn thing began — here in Ontario, anyway — I was out of the country. My wife is a teacher, and her school’s academic calendar is a bit out of sync with the rest of the schools in Toronto; her March break comes sooner than theirs. We’d pulled our kids out of school early to take a trip down south, content to miss the holiday crush and surging prices. As we left, we were also feeling blessed because it seemed likely we’d complete our holiday and return home ahead of any major developments with the “Wuhan virus” situation in North America: we knew that it was here and seemed to be getting worse, but as we jetted off for Florida, it was still an open question as to how long it might take to really boil over, if it ever did.

Well, it did, and about 36 hours before we arrived home. By the time we landed back in Toronto after a lovely vacation — North America’s last, we’ve joked — the bottom had fallen out. Talking with friends and family in Toronto after our return, the consensus seemed to be that the panic really set in on the Wednesday and Thursday of that week, when the NBA and NHL, respectively, shut down. We landed that Saturday. The government had implemented a two-week home-isolation protocol for those returning from abroad, but this was so new and chaotic that the guidance hadn’t meaningfully filtered down to the airports yet. (My National Post column at the time, describing the half-measures and total confusion among political leaders, reads with hindsight as a depressing warning of our uneven, faltering response to come.)

I have a few whiteboards in my home office (which rapidly became my only office, come to think of it). There’s the big board, which I use to plot complicated stuff, and there’s a little wee one that I have stuck up on a wall behind my office chair. That’s where I jot down daily to-dos and whatnot. On our first day back at home, I wrote down “Day 1” — to track our 14 days in isolation. Day 14 came and went, and instead of us exiting isolation, the rest of you joined us in the province’s first lockdown. My little day-counter zoomed past 14 and kept going for hundreds of days. In the fall, when my kids went back to school, I restarted back at Day 1, counting the days things remained open. (I was skeptical that it was gonna work, you see.) On November 23, when big-time restrictions returned to Toronto, I reset it — again — to Day 1. That was 217 days ago, and we’ve been under some form of meaningful public-health restrictions ever since.

But today, I’m wiping that off the board. No more day-counter. At 0852 on Monday, June 28, 2021, my pandemic basically ended. It’s been two weeks since my second shot of Pfizer mRNA vaccine. My wife, my parents, my aunt, my grandmother, my in-laws (well, one of them is booked for this week, but still), my sister- and brother-in-law, the rest of my in-laws, most of my friends: we’re all vaccinated. That leaves only the kids, and they’re still too young (by some margin) to get a vaccine. The danger for my family isn’t zero now, but it’s been reduced to something essentially like what it was like before all this began. I can mostly go back to just worrying about all the stuff I would have worried about before.

For readers who think this reads as prematurely triumphant, rest assured that I know the emergency continues. We aren’t yet done the Canadian vaccination campaign, and I support continuing reasonable public-health measures on a local basis until that effort substantially wraps up. (That will be sooner than people think, I suspect, or at least sooner than they’re emotionally prepared for.) After we’re done Canada, we’ve got an entire planet to vaccinate. This isn’t purely charity or altruism. Until COVID-19 is brought to heel everywhere, there’ll be a risk of new variants emerging that can defeat our vaccines. There’s going to be a period of heightened vigilance and alert, perhaps a long period, as we watch for new variants and hopefully keep a keener eye peeled for other emerging threats so that we don’t get knocked on our collective butts the next time a virus goes squirrelly on us.

So yes, I know this isn’t over for everyone. And I know there’s going to be a long period of decompression and alert after this. But for me, and for millions of Canadians like me who believe in the power of these vaccines and who rolled up their sleeves for a jab or two, our personal experience of this pandemic is changing. And once you’ve got many millions of people all having different personal experiences, that will lead, inevitably, to a different societal perspective and response. Some people will be forever changed by this — well, actually, strike that. We’ll all be changed by this: it’s been too big and too sustained an event to not reshape our worldviews. But what I mean is that some people will have a harder time than others returning to something like normal, and some, including those with health conditions or loved ones who are at particularly high risk or who cannot be vaccinated, will have a very different experience than most.

But note that word — most. Most of us are exiting this long period of anxiety and uncertainty. A month or so from now, we’ll be down to the mopping-up.

What that phase might look like fascinates me. Here at TVO.org, after I take a short vacation, I’m going to spend some time asking experts how this transition is going to play out and what we’ll have to focus on and be mindful of. I’m not necessarily interested in where we’ll be, say, five years from now. We’ll all just have to wait and see. But what about five months from now — say, the end of this year? What will those early months after we wrap up the vaccination campaign look like?

Well, stay tuned. I’ll be bringing you some of those perspectives soon. But first, some time off, taken with gratitude and relief that modern science has helped bring this weird era in history to at least something like a close for me and mine. And now? I’m off to erase those numbers from my white board. I won’t miss them. 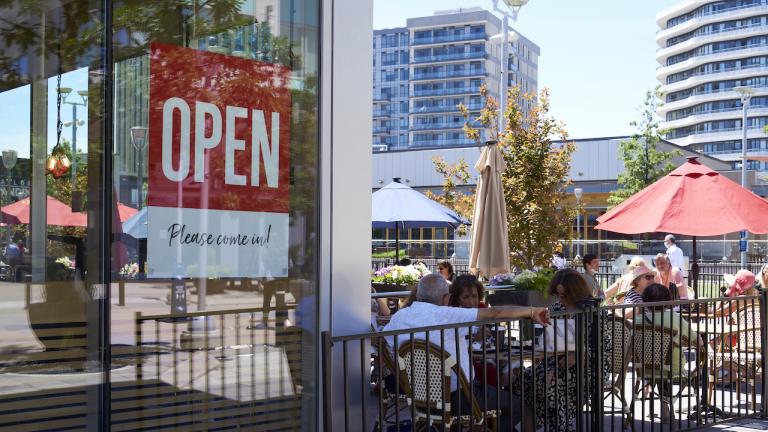