EXCERPT: In her new book, 'F-Bomb: Dispatches From the War on Feminism,' Lauren McKeon visits her old high school and talks to students about slut-shaming, consent, and feminism
By TVO Current Affairs - Published on Sep 20, 2017
For young women, social media presents a new front in the war on feminism. (Highwaystarz-Photography/iStock)

In this excerpt from the new book F-Bomb: Dispatches From the War on Feminism, author Lauren McKeon visits her old high school and sits down with a group of teenage feminists to find out what women's rights means to them. Click here to check out McKeon's weekly column for TVO.org, where she tackles feminism, women's rights, and gender issues.

They say you can’t go home again. But if you pester the principal enough, you can go back to high school, which is almost the same thing. Since starting this project, I’d wanted to return to my old high school gender studies class, a place that played a formative role in my own feminism. It’s likely that, in the early 2000s, my high school was one of a handful in the entire province offering gender studies classes. That’s since changed, thanks to a group of young women called the Miss G—— Project for Equity in Education 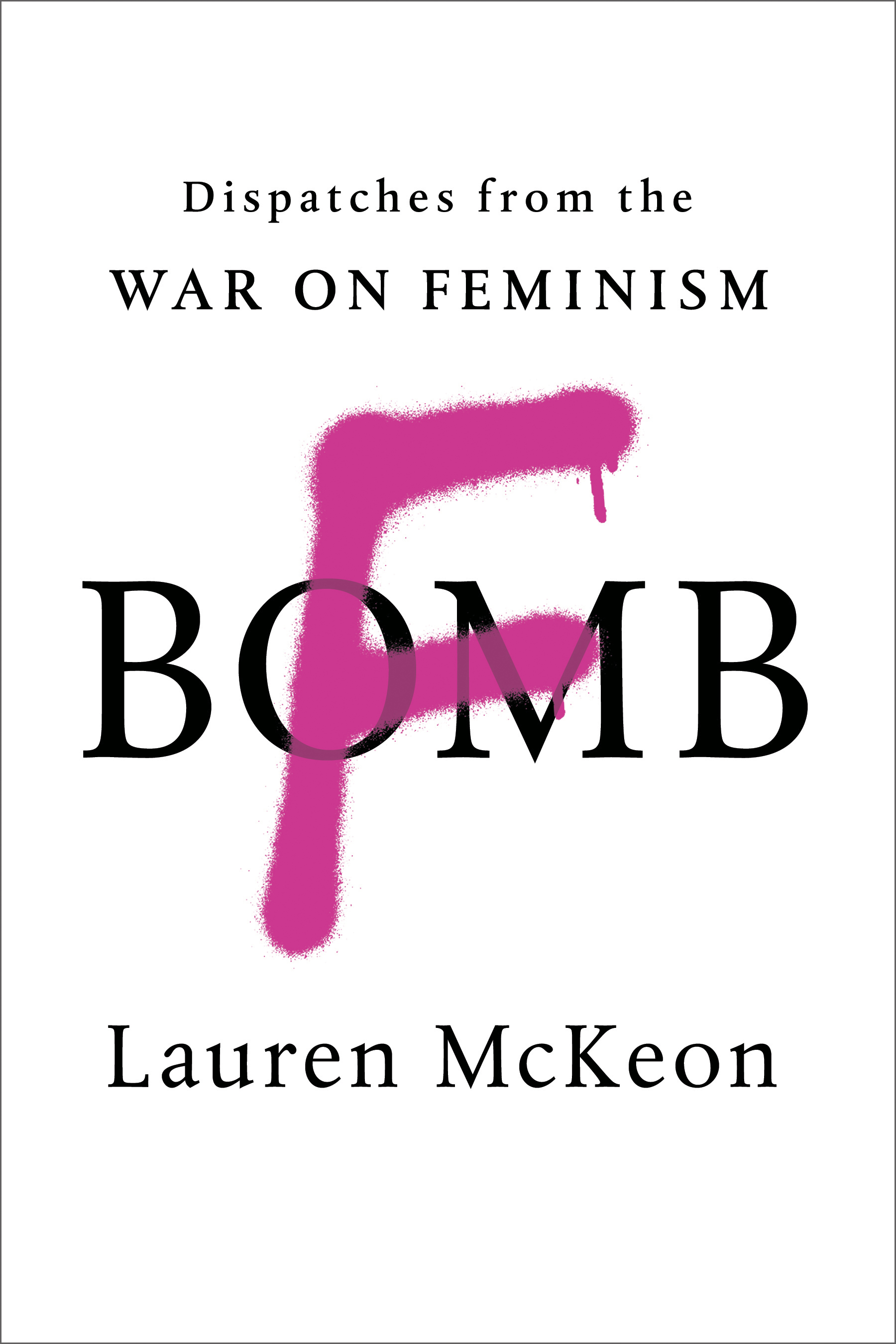 (Julie Lalonde, whom we met in chapter two, was one of its members). The project is named after a case study in Dr. Edward H. Clarke’s 1873 book Sex in Education; or, A Fair Chance for Girls. Miss G——, a young woman of remarkable intellect, died, doctors declared, because she tried to compete with young men in the academic field. “Believing that woman can do what man can, for she held that faith, she strove with noble but ignorant bravery to compass man’s intellectual attainment in a man’s way, and died in the effort,” at least according to Clarke. The goal of the Miss G—— Project was to implement gender studies electives in high schools across Ontario (and, ideally, spark similar curriculum changes across the country). After an eight-year advocacy and public awareness campaign, the project succeeded. In fall 2013 the first gender studies classes debuted across Ontario high schools.

I’d badly wanted to sit in on those first classes, and in January 2017 I finally got a chance. What kind of young women and men would sign up, I wondered? Would this new generation of budding feminists sense the fault lines across generations? How did students engage with these new feminisms, and how had the class changed in the fifteen years since I’d been a high school student?

I returned to my old high school to meet with a few of Crawford’s students and hear more about their lives as teenage feminists. I met them in the library, a huddle of feisty, thoughtful sixteen-year-olds in red-plush chairs, positioned at the back of the two-tier room, next to the manga. The group who volunteered to chat with me was diverse, including two young women of color (Victoria and Areeja), two young white women (Kaitlyn and Josie), and one teen named Sam who identified as genderless and prefers the pronoun they/their. (“There’s male and there’s female,” Sam told me, placing one hand to the far left and one to the far right. Then Sam stretched one arm far to the back. “Then there’s me. I’m, like, outside getting McDonald’s.”) When the term started, Sam told me, Crawford asked the class to raise their hands if they were a feminist. The only person who did so was Sam, whose mother is the president of the board of directors of their local Girl Inc. chapter. Even so, Sam once recoiled from the word, too, particularly when Sam’s mom tried to send Sam to a Girls Inc. summer camp. “I told her, ‘I don’t want to go to a quote-unquote feminazi camp — especially since I’m genderless.’ I didn’t want to be surrounded by girls because I knew I’d get called ‘she.’” But that wasn’t what Sam experienced at all. “One, everybody called me ‘they,’ and that was great. Two, I learned more about what feminism is. It’s not what some people might think it is. It’s not all about ‘women are better than men.’ It really is about equality and raising girls to believe they are equal — they are strong enough.”

“I didn’t raise my hand,” said Victoria. “I don’t really think I thought about it ever. You pick up on little things that people do to put down girls. You don’t really think you need to do anything about it. It just happens all the time so you just go with it. Being in this class and being aware of what happens to women everywhere — I am a feminist.” Kaitlyn added that the stereotypes about feminism also stopped her from raising her hand that first class, but the more she realized the word is not “what people have made it,” the more she changed her mind: “I would say that I identify as a feminist now.” Areeja agreed. She always questioned the “girls are supposed to” thinking she heard, but until she got to class, she said, “I never questioned it too much.” Now, she’s more confident in her opinions. Josie, who played on the boys’ hockey team for six years growing up, and was the only girl on the ice, said that she always identified as a feminist but never understood why it was important to voice it out loud. Plus, there was a stigma. Still, if asked that question today, she and the rest of the group would all raise their hands — at least, if they were in class.

“Although has anyone noticed that when you tell somebody you’re in the gender studies class they give you the look?” asked Sam, demonstrating a facial expression that conveyed disgust for all things losery, a look I perfected during my high school years but have never been able to effectively pull off since. Sam called it the look of “Oh, really?” The others murmured assent, and stories emerged in rapid fire.

“A friend was like, ugh, really? Are they teaching you that there are two genders?” said Sam, referring to an internet meme that pokes fun at the assertion there are more than two genders.

“That’s the number one question that I got,” added Josie.

“Or that it’s a girl’s class,” said Victoria.

When I asked them what issues are most pressing for them and their peers, and how increased awareness of feminism might help tackle those issues, the group didn’t hesitate. Slut shaming. Sexual harassment. Consent. Josie, who told me it was the first week she’d come to school without makeup on since grade six, felt that girls in the school were taught not to complain if they were assaulted. “A guy can come up to me and grab me by any part of my body, and that’s okay because he wants me,” she said. Victoria smirked, “It’s flirting.” If sixteen-year-olds were encouraged to dismiss this kind of stuff, Josie wondered, how would they react when they were older? She added that she was thankful she’d never been harassed or assaulted at school. She let the words hang in the air for a moment and then reconsidered. Actually, she added, that kind of behavior was so normal at school, she had experienced it; she’d just never known to call it that before. Someone once grabbed Sam’s crotch to “see if I had a dick.” A teacher once said it was okay for students to ask Sam about genitalia because the students might be curious. Sam had been called a “special snowflake” a lot.

Then there was that Instagram thing. The year before my visit, they told me, a group of male students from the schools in their region started posting nude photos of girls online. Everyone was talking about it. Girls were named and rated and called fat sluts. Victoria spent a lot of time blocking on social media people who were following the account. Eventually the ringleaders were caught, and it fizzled out. But boys at the school are still constantly asking girls for nudes and then sharing them as soon as they get them. The group was disappointed by administration’s response, which, they felt, was often to simply delete the photos. Girls were told not to send them. Fair enough, they said, but what about the culture of pressure, of learning consent and respect? What about that?

Victoria added that she’d been the target of slut shaming. “It happened to me. I had a bad reputation in grade nine,” she told me. “People would yell ‘slut’ to me in the hallway. No one ever stood up for me. Because I had a bad reputation, they had no respect for my body. A guy would talk to me and be like, ‘Okay are you going to send me nudes?’ Or people would come up to me and just grab my waist. Even though I did do dumb things it didn’t mean that anyone could touch me. I was just supposed to take it. If I didn’t, guys would get mad at me: ‘Oh, you’re ugly anyways — you’re gross.’” Then she said something that made my skin prickle: “And like it was my fault.” On some level, it seemed, she still hadn’t been able to shake the feeling that she’d deserved it. My mind flashed back to the “positive posts” that decorated the entrance to the gender studies classroom. Suddenly, the little affirmations of “You’re worthy” and “Love” scrawled on the pale lemon squares didn’t seem the least bit hokey. They seemed vital. This, I realized, was a feminism of healing.

The most important thing many of them had learned in gender studies, they agreed, was that things can change, even if it starts out on the tiniest of scales. I’ve learned this, too: once young women start engaging in feminism, amazing things can happen, whether they’re aiming big or small. Victoria, like others in gender studies, has started to live by a creed she learned in that unique classroom: little things do matter. “When you speak up, just in little groups,” she told me, “or in response to things that you hear in the halls, it does make a difference. Even though they may not change the way they think or believe, you may get them to start thinking about it.” In these little ways, the group agreed, you can make progress. Just then, the bell rang out through the library. We’d lost track of time. I was supposed to have met with a second group, but there had been too much to say. They could have talked for hours more.

As they packed their bags and headed to lunch, Sam lobbed one more thought out, an endnote to the conversation: “Consent and respect, my friends!” They all nodded. Consent and respect. And then they walked away, each back to their own friend groups, soon swallowed up in the crowded hallways.

Excerpted from F‑Bomb: Dispatches from the War on Feminism copyright © 2017 by Lauren McKeon. Reprinted by permission of Goose Lane Editions.