In his new memoir, the Edmonton teacher and international volunteer explains what drove him to dedicate three years of his life to rescuing a chimpanzee from a zoo in Iraq
By TVO Current Affairs - Published on Aug 15, 2019
View Transcript
Nam Kiwanuka interviews animal advocate Spencer Sekyer.

“The world is a book, and those who do not travel read only one page.” — Augustine of Hippo

The lukewarm drink slipped down my throat, filling my stomach with fire, vaulting up into my nose and making me gag. My watering eyes drip-dropped into the shallow wooden bowl as I lowered it from my mouth, and my tears made ripples in the runny concoction that looked, smelled, and tasted like a tobacco chewer’s spit cup. Each sip left my lungs breathless and body ablaze, but I chugged it back until the sandy dredges coated my upper lip. I gave the wooden bowl back to Don Luis, the shaman standing at the edge of my stained mattress clad in a white guayabera with colorful cuffs. He took it to the centre of the room, which was lit solely by moonlight filtering through the temple’s thatched roof in the depths of the Amazon rainforest. 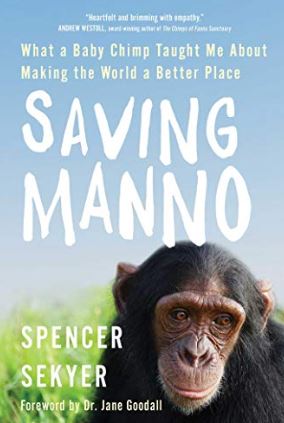 ​Don Luis had led me here from my cabin in Selva Madre, a 22-hectare chunk of the Peruvian jungle that resembles the Garden of Eden in daylight. At the hour of my ceremony, however, it might as well have been the dark side of the moon. My headlamp illuminated the treaded paths as I followed him through the compound, across planks layered over creeks and ditches, under the brightest stars I had ever seen, and into the temple, where eight mattresses lay against the walls. He checked behind each one for snakes and gestured for me to choose one. I picked the mattress nearest a screen door to the outhouse, in case I needed more than a bucket to purge. I settled into a yogi position, studying Don Luis’s silhouette as he stood at a table mixing liquids from plastic pop bottles with their labels peeled off. He chanted, lit a thick, hand-rolled cigarette, and blew wisps of smoke in the world’s four directions, repeating a prayer after each massive exhale. Finally, he approached me with his outstretched arm to take my pulse with his clammy fingers. “Very good,” he said, stretching each vowel forever, before returning with the bowl, blessing it with a blast of smoke, and placing it in my hands.

My stomach gurgled within seconds of swallowing the liquid, but there was no immediate effect. I shifted into a balled-up posture under Don Luis’s watchful eye, expecting visions and answers to questions I hadn’t yet thought to ask. I’d sojourned alone on this spiritual retreat because I was at a crossroads. A brew of blessings and hardships over the previous months had destabilized me, leaving me pondering my purpose in the world.

After 30 minutes, I wondered if I was in the one percentile of people for whom ayahuasca has no psychotropic effects. Just then, my body went numb and my cheeks felt elastic, as if they might droop into my lap. A wave of dizziness overcame me. Here it comes, I  thought.

From out of the darkness, Emma, my beloved mutt, shimmied toward me. She hopped onto the mattress and rested on her haunches at the edge of the bed, out of reach. She was mangy and malnourished, her skin almost snaking across her ribs, looking as she did when I found her and her nine puppies in a ditch in Kabul, Afghanistan. This isn’t real, I reminded myself. Emma died last month. I lurched forward to pet her but she disintegrated into pixel-like orbs.

As Emma disappeared, four shadows glided toward me like black stratus clouds turned on their sides. Their paces quickened until they were almost flying, and I reflexively threw my arms over my face for protection.

I fell onto my back, facing the open ceiling, with my eyelids locked closed. My skin began to sweat, and I saw colourful neurons firing behind my eyelids, threading into patterns resembling textiles in Arab souks. I let the hallucinations flow through me, let my stomach churn, let the dizziness rattle my consciousness. I kept touching my face, reminding myself aloud, “This is still me.” All the while, Don Luis switched from singing and whistling an icaro, a melodic medicine song, to only whistling it. When I opened my eyes, the faint light on his loose white shirt and spread arms in front of me turned him into a soaring eagle. He and the small fire burning at the end of his cigarette were mesmerizing, and I believed I’d seen the essence of his soul.

The cloud-like entities still loomed over me. I opened my eyes to face them. I heard whispering, and I realized what they were. Who they were. They were my critics. The people who have attacked me for helping the needy abroad instead of “our own,” or who have called me a white saviour for trying to do good. The voices that have lambasted me for rescuing animals instead of people, or dogs in other countries when we have so many strays at home. They were the critics that have condemned me as a try-hard, a show-off, a hypocrite.

Then, a flash of an old dog-eared snapshot from my family album made me smile. It was my brother and I as small boys, holding dead ducks we’d shot on a family hunting trip. My smile in the temple disappeared, but it stayed forever in the photo. Was that a moment of childhood innocence, or did it reveal something inherently evil about man? What was wrong with me that remembering that moment after four decades brought me joy? I sprinted through years of hunting innumerable sentient beings, struggling to come to terms with the pain I’d caused. The swallow I’d thrown rocks at on the fairground where I’d worked one summer. All the coyotes I’d hunted, convinced I was in service to a greater good. They were probably as smart as the domestic dogs that brought love into my heart and changed my life forever. Am I a hypocrite for my past deeds or just an evolving animal? I thought.

I rolled onto my side. My temple throbbed so viscerally that I could have sworn someone was pushing on my ears. I could almost see the outline of a small face close to mine. Was it my unborn child? The boy — I believed — forming in my wife Christie’s womb? Or was I the baby in this scene, experiencing the pressures inside the womb of the world? I rolled onto my back to face the vision. It was my son. A miniaturized me, blond-haired and blue-eyed. But he was not alone. Beside him sat a baby chimpanzee of equal size. It was Manno. My friend stuck in a zoo in Iraq, kilometres from a war zone in Mosul, staring at me with those massive brown globes he has for eyes. He stretched out his long arm and placed his wrinkly dark hand on my son’s chubby leg. I saw it now. They were one. Their needs were no different. Their instincts the same. Their right to life, to happiness, equal.

As I lay there, now surrounded by the sounds of the jungle, I reflected on the question I had come to answer: What is the meaning of life? It was the question that had started me on this journey, and as I stared at the images of my son and Manno before me, I realized the answer had always been there. The meaning of life is love. Of course it is. Love is really all there is. This newfound awareness was beautiful in its simplicity. We all inherently know it. But to feel it in my core was euphoric.

I felt a renewed sense of purpose. I had a responsibility to love. My wife. My family and friends. Animals. Soon, our baby would add more love to our lives. To be of this world is to live for this world, and the highest expression of that is to give love.

The answers comforted me and turned what had started out as an incredibly uncomfortable experience into a calming exaltation. This is the beauty of ayahuasca: it will show you what you need to know, what you need to work on, but it’s on you to do the required work for any meaningful transformation. In that moment, I realized what I had to do — to give love to the helpless, I had to get Manno to a sanctuary so he could live the life he was entitled to live. I had to change his world, not mine.

Health
‘An ongoing emergency’: Why public-health officials are calling for basic income

Across Ontario, public-health units are not only battling COVID-19 — but also advocating for a new post-pandemic normal.

Opinion
Cancel culture? It’s not just a left-wing problem — and I should know
Michael Coren