In his memoir, journalist Duncan McCue reflects on the five months he spent living on a Cree trapline in northern Quebec — and what the experience taught him about life and his Indigenous identity
By TVO Current Affairs - Published on Jul 27, 2020
View Transcript
Nam Kiwanuka interviews Duncan McCue on The Agenda in the Summer.

I’m out checking my rabbit snares one day, on a route that normally takes me about three hours, when I remember that beaver pond that Bruce and I discovered weeks ago. I decide I am going to bring home a beaver.

I head for the pond. I’m pretty sure I know the way. Every once in a while, I see the cuts Bruce and I left in the trees. I find the pond and settle in to wait. I imagine how Sally will react if I bring home a beaver on my own. I wonder what Robbie might say. I imagine teasing Bruce that I have the patience to wait for the beaver when he does not. I sit for at least two hours, my back stiff, my hands cold, until the beaver finally swims across the pond. 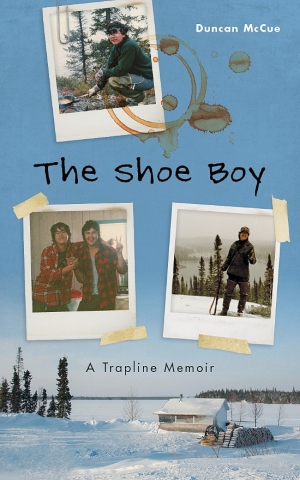 ​I see its small head first, swimming steadily, a steady V trailing in the water behind it. I check my rifle. The bullet is in the chamber. My hands are shaking slightly. I take a deep breath and raise the rifle to my cheek.

The beaver is swimming across the pond, not getting closer or farther away. I look down the barrel and try to steady my breathing. I blink my eyes, try to focus on nothing but the small dark head. I pull the trigger.

There’s an explosion in the water, about four inches from the beaver’s head. The last thing I see is the beaver’s tail, as it dives, making a loud slap as it smacks the still water. I missed. Actually, I missed by a lot. The beaver would swim into its lodge, and it would be hours, maybe days, before any beavers would surface again. That’s that. I start the long walk back to camp.

I find myself on the crest of a hill, overlooking a lake. It is quiet. No birds and no wind. I can see all around the never-ending blanket of black spruce, dotted by patches of alder, yellowing in the autumn cold. Today, the land seems unforgiving and harsh. I realize how simple it would be to kill myself.

I don’t know why suicide pops into my head. It just does. I’m holding a loaded rifle, which could easily end my life. I could die out here, and it would be days before anyone would find me. I’m lonely and tired of daily reminders of my inadequacies. I survey this immense wilderness, and I feel small, meaningless, inconsequential. I’d cry — but there are no tears.

A wiishkichaanish lands in a tree nearby, jarring me from these morose thoughts. The little grey bird cocks its head, looking at me with its sparkling black eyes. I dig into my pack for a piece of bannock and toss it to the bird. It eyes me warily, hopping from tree to tree, getting closer to the bannock until it finally swoops boldly to the ground and snatches the bread in its beak. It flies away, leaving me alone again.

That night, back at the cabin, I don’t tell anyone about the beaver, or anything else I experienced that day.

As an adult, a journalist, I have interviewed mothers, fathers, aunties, uncles who weep and tremble and ask, over and over — why?

I feel the need to repeat it, because we’re numb to these statistics — so often recited by media when referring to grim conditions so many Indigenous communities endure. I myself have quoted these statistics, standing in front of a camera to tell the country about yet another community pleading for help because young people are killing themselves.

Which is why I am distressed by this sudden recollection, this thing buried deep in my brain that I’ve never told anyone: I was once suicidal.

Could I have been one of those young people? Surely not.

Put aside the difficulties I would have had committing the act. Even now, it’s beyond me how one cleanly kills oneself with a rifle. My 17-year-old self certainly didn’t plot details or even mull over how to point a three-foot-long rifle at my head and somehow pull the trigger, more than an arm’s length away.

Nor was I from Pikangikum or Onigaming or Sheshatshiu or any number of other impoverished First Nations communities now synonymous with “suicide epidemic.”

I wasn’t a teenager who watched his mother’s alcoholic boyfriend smash a fist into her belly so many times that she vomited on the couch or who had an ignorant white teacher humiliate him in front of the class by demanding he read The Great fucking Gatsby out loud, or who had eaten nothing more than Wonder Bread with thinly spread Skippy peanut butter for the past six days, or who had a girlfriend who slept with another boy because his parents had a new MXZ Iron Dog snowmobile, or who had no qualms about huffing gas, because no one could get their hands on a bottle that night.

There are too many Indigenous kids, surrounded by the violence and ill-health that accompanies grinding poverty, who see no other way out of their lives of ennui and despair but to kill themselves. I was not one of those kids.

I was, like so many Indigenous youth struggling their way into adulthood, acutely aware of what I was not. I did not speak my Native language. I was not a very good hunter. I did not know how to sew moccasins. I felt like a pretty lousy Indian.

Yet, I also did not look like the people on the television beamed to us from the south. I had no desire to become a chartered accountant or a lawyer in a glassy downtown office. I was uninspired by so many white measures of success. Even if I could attain them, I wasn’t sure I wanted to.

Zits. Horniness. Pressure to fit in. Those are common afflictions of teenagers everywhere. But stir in the distress of feeling totally useless. That’s what it’s like to be caught between two cultures. That’s what so many Indigenous youth feel — every day of their lives.

Those who commit suicide don’t necessarily want to die. They just want to stop the pain.

Excerpted with permission from The Shoe Boy: A Trapline Memoir by Duncan McCue, 2020, UBC Press, Vancouver and Toronto, Canada. For more information: www.ubcpress.ca/the-shoe-boy ​​​​​​​

Environment
Excerpt: Tom Rand’s ‘The Case for Climate Capitalism: Economic Solutions for a Planet in Crisis’
TVO Current Affairs
The Agenda in the Summer
The Legacy of Raymond Moriyama
Coronavirus
Containing COVID-19? There's An App for That
sfy39587stp16