‘Everybody’s there to give’r’: Veteran serves Canada in a new way

Tyron Lincoln’s military career has taken him from Bosnia to Afghanistan — to the Invictus Games in Toronto
By Sarah Reid - Published on Sep 27, 2017
Wheelchair rugby is one of the three sports Lincoln will be competing in at the Games. (Canadian Forces Morale and Welfare Services)

At the 2017 Invictus Games, being held in Toronto from Sept. 23 to 30, retired sergeant Tyron Lincoln will be competing in three different sports — wheelchair rugby, cycling, and track and field — even though he battles chronic pain.

An accident that occurred while he was loading a bomb onto a fighter jet left him with a linear skull fracture. “So I suffer from severe headaches,” he explains. “I suffer from severe pain all the time. So I’m at a pain management clinic, and they can’t do nothing. The doctor just tells me, ‘You know what, you’ve got to live with it.’” 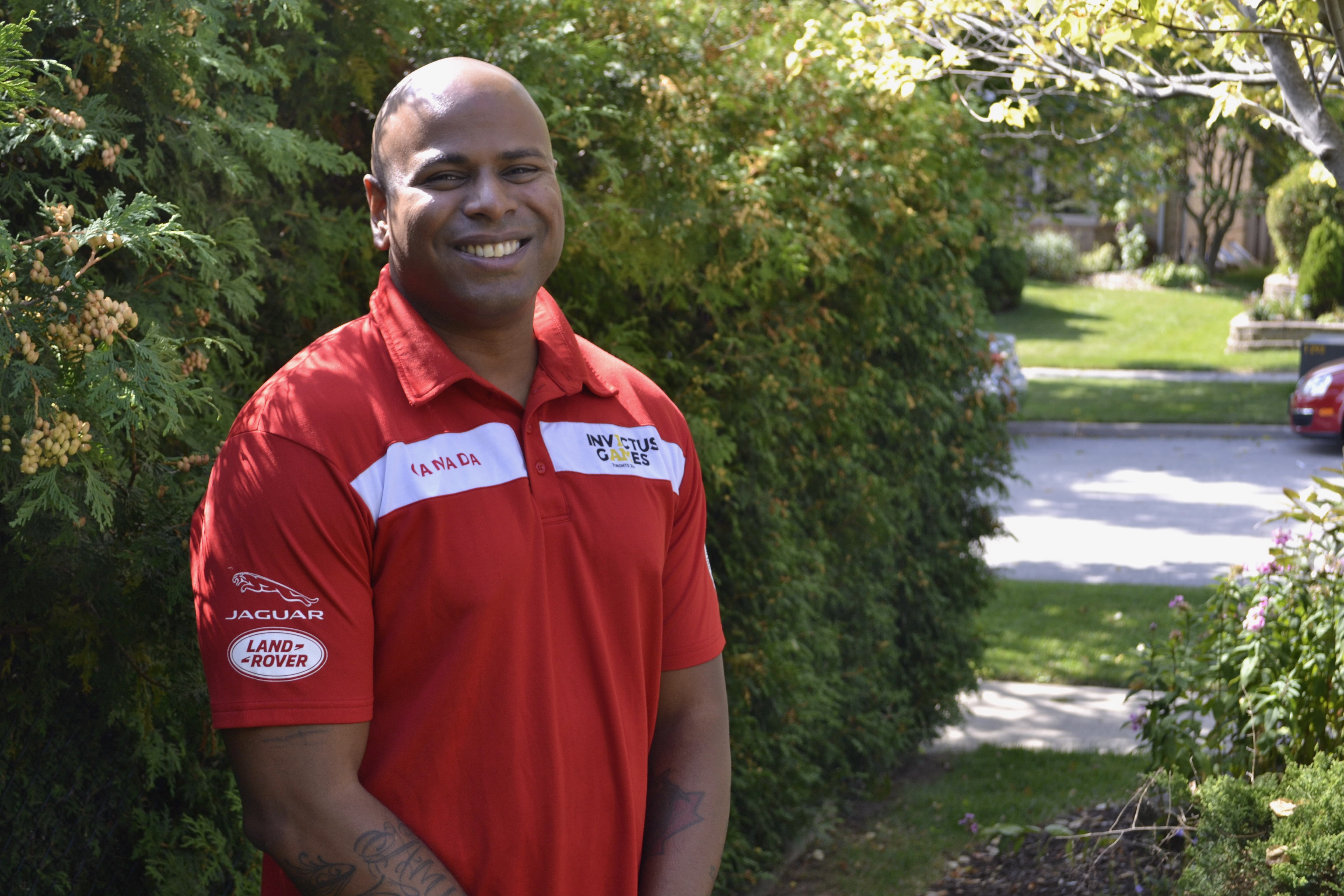 He’s suffered a shattered kneecap, and has a degenerated disc in his back. “I’m in constant pain because of my back, because of my head,” he says.

His experiences in the military also created psychological challenges.

After serving in Bosnia in 1997, he did a stint in the Air Force, where he worked as an aircraft mechanic. He missed his old branch, though, so he trained as a geomatics technician, learning how to collect and analyze geographic data, then re-joined the Army, later serving in Afghanistan in 2007 and again in 2009.

In Afghanistan, he saw firefights. He remembers the constant hail of rockets. “There were lots of incidents,” he says. “A lot of the guys on the team were missing limbs and stuff like that. But we all suffer in some way, right?”

Even the incidents he didn’t experience first-hand had their effect. “You sit there and you watch,” he explains. “And you’re like, ‘Okay, there’s a firefight, we have to send these guys in to do what they need to do.’ And we’re sitting there, watching everything that happens. So you’re still a part of it, even though you’re not directly involved. So it does tear you down bit by bit by bit.”

Once, in Alberta, he had to respond to a road accident while travelling with an army convoy. A pickup truck ran into one of their light-utility transport vehicles, which was sent flying into the air. “I was just a corporal then, but I was the senior guy,” Lincoln says. “And I stop, and I’m like, ‘Holy shit.’ So I grab my first-aid kit and start running up the hill. And as I crested the hill, I saw a truck, a pickup truck … the whole one side was squashed, flattened.”

The soldiers in the transport truck emerged, disoriented. They were wearing helmets, which probably saved them, because some of the tank parts they were carrying came through the front of the cabin.

Lincoln knew he had to make sure they were calm. He got them to sit down while he approached the other vehicle. “There’s a dude in the truck … they’re asking me, because no one wanted to come … yeah, he’s dead. The steering wheel was up inside his chest … he was going about 150 [kph] … he was going so fast and the timing was so perfect that he missed the right wheel and hit the left wheel on the truck, so the whole truck ran over his pickup.”

Years have passed, but such moments and images stay with Lincoln. “Over and over and over, seeing all this stuff. And then here comes Bosnia, and here comes Afghanistan, and here comes all these things we’re doing.” He meets regularly with a therapist, having been diagnosed with post-traumatic stress disorder, or PTSD.

Now two years retired from the Forces, he’s a central facility controller with Keolis, a French transport company that runs a light-rail system out of Kitchener-Waterloo. “I don’t have to work — I choose to work. Because I’m contributing and I’m giving myself more opportunity. And I’m growing and I’m learning and my brain’s not dead and I don’t get stupid.”

Despite everything he’s been through, he’s positive about his time with the Forces. “I never regretted it. I loved it. And I probably would do it again.” And he welcomes the opportunity, he says, to serve his country again in a different way — as a member of the Canadian team for the 2017 Invictus Games.

Of the three sports he’ll be playing, his favourite is wheelchair rugby.

“It’s so much fun. We just live off each other. It’s positive. Everybody’s happy; nobody’s bummed out. Everybody’s there to give’r.”

As for why he’s participating, Lincoln says he served in the military for years, but the Invictus experience is “on another level.” All the competitors have come together “educate people on mental health, all the illnesses people have, and how we get through it and become better.”

“This is the best feeling ever. You can imagine just standing there, in the opening ceremony, and regardless of whether you win a medal, and just standing up there, and that flag … Seen it a lot, done it a lot with the Canadian flag in the military, but no one sees it. You’re not going to see us out in the parade square in Afghanistan … but the Games? It’s televised everywhere. Everywhere in Canada, everywhere in the world. And just to stand there and see your friends and family and people in the country support you. What else can you ask for?”

Society
How one Ontario city is tackling homelessness and the opioid crisis
Barrie consistently reports higher opioid death rates than both the region and the province as a whole — so it’s bringing the business social-service communities together to support marginalized people downtown.
Kelsey Rolfe
Society
Is Poker a Metaphor for Life?