‘Enough is enough’: Loved ones speak out about conditions in federal prisons

No visits. Deteriorating mental health. Extended isolation. Spouses of inmates are sounding the alarm — as a new report points to the suspension and violation of basic human rights
By David Rockne Corrigan - Published on Jun 22, 2020
Signage at the Beaver Creek Institution, in Gravenhurst. (Frank Gunn/CP)

Marie checks a Facebook group chat that she shares with four other wives whose husbands are serving time — mostly life sentences — at federal prisons across the country. With in-person visitation on pause, and lockdown conditions in place for months, the women have supported one another as they and their husbands have grown increasingly angry and frustrated with the situation. The tone of the group chat, she says, has become more panicked over the last few weeks.

“We were realizing that all of our men were behaving the same way. We don’t know what to do,” says Marie (whose name has been changed to protect her identity); her husband is serving a life sentence at Beaver Creek Institution, a medium-security prison in Gravenhurst. The incarcerated men, she says, are feeling more isolated than ever, which has created distress and resentment. “These are men who are serving life sentences. These are not men who are new to the system. Their mental health is deteriorating. We’re watching them deteriorate.”

Wives and partners of men incarcerated at federal prisons tell TVO.org that violence among inmates is on the rise and that mental health is declining as a result of COVID-19 mitigation measures. Such measures are now coming in for more public criticism: on Friday afternoon, the Office of the Correctional Investigator, the ombudsperson for federally sentenced offenders, released its own update in which it said prisoners’ human rights had been violated. (Read the full update below.)

Marie says that her husband has effectively been in lockdown with his unit since March, even though the medium- and minimum-security facilities at Beaver Creek have not had a single COVID-19 case.

Correctional Service Canada suspended visits from the public at all institutions on March 14. It did introduce video visits, but Marie and others told TVO.org that institutions have not devoted sufficient resources to them: video visits, for example, have been hard to schedule because some institutions have only one computer terminal assigned to them, meaning that visits need to be coordinated weeks in advance. (The Kingston Whig-Standard reported last week that Millhaven Institution installed a second terminal following complaints.)

“We’re fed up. Enough is enough,” says Marie. “The visits are a big thing for these guys. It’s the only thing that keeps them going and somewhat sane and mentally grounded.” Research done by the CSC suggests a strong correlation between private family visits and a decrease in recidivism.

Candace (whose name has also been changed), another member of the group, says that her partner, who is serving a sentence at Saskatchewan Penitentiary, has become paranoid and aggressive. “He thinks I’m cheating on him. We’ve been together for years, and of course I’m not, but that is what is happening without these visits,” says Candace. “I can’t get through to him unless I can see him.”

She worries that violence will get worse in Canadian prisons unless the restrictions on visiting are eased. That’s a concern shared by Donna, who asked that her last name not be used. Her husband is also serving time at Beaver Creek Institution. She hasn’t seen him since January.

“My husband tells me there are a lot of black eyes right now. Bathroom brawls,” Donna says. “It’s been hard on everyone. A lot of relationships have broken up over this.”

Violet (not her real name), whose husband is serving a life sentence at Warkworth Institution, is worried for his safety — and the safety of other inmates, who have become increasingly prone to conflict without the routine and programming they’d normally have. “Not being able to escape that? That’s a huge thing,” says Violet. “They don’t have any elders; there’s no chaplain. No NA or AA meetings. That’s normally their escape.”

Last week, CSC Commissioner Anne Kelly released an update, saying that CSC is “preparing to resume some services, activities, and programs.” There is no mention of visitors or when lockdowns might be lifted. Marie notes that in Ontario, she’s allowed to play team sports, take her child to daycare, or even visit her parents who live in long-term care — but she still can’t visit her husband in prison.

In the Office of the Correctional Investigator’s update, released June 19, ombudsperson Ivan Zinger writes that “as the situation stands today, restrictions imposed by the pandemic show little sign of abatement. Indefinite lockdowns or extended periods of cellular isolation continue at many facilities, even those that have not experienced an outbreak.” He also raises concerns about the emergency measures and their human-rights implications: “A number of statutory obligations, including programs, services and even basic human rights, were suspended, violated or withdrawn as temporary emergency measures to deal with the pandemic. In some affected institutions, public health authorities imposed restrictions that included near total cellular confinement, and even denial of fresh air exercise. It needs to be said that some of these restrictions reach beyond measures or controls contemplated in either domestic or international law. Public health emergencies must be managed within a legal framework. Rights need to be respected and restored.”

Zinger notes that, while there have been 360 confirmed cases of COVID-19 among federal inmates and two deaths, there was only one known active case as of June 19. Among his recommendations are that CSC conduct an epidemiological review of inmates who contracted the coronavirus; that federal prisons return to “some kind of normality” and lift “restrictions on conditions of confinement”; and that the CSC make its plans for “Shaping the New Normal” publicly available and accessible.

A spokesperson for CSC told TVO.org via email that it is focused "on the gradual re-introduction of some activities. Initially, we are resuming institutional correctional programs. While that is underway, we are reviewing increasing movement within our institutions, including more access to the yard, increased access to the gym, library, and other activities. The re-introduction measures are based on the best available public health knowledge, practices, and epidemiological considerations." Adopting a "gradual approach to resuming activities — including decisions around who can enter our institutions," they said, "is key to making sure we keep everyone, and their families, as safe as possible."

In a virtual meeting of the federal Standing Committee on Health last week, Catherine Latimer of the John Howard Society — an organization dedicated to criminal-justice reform — told the committee that this is the “worst crisis in Canadian corrections since the Kingston Pen riots almost 50 years ago.” She called on the federal government to conduct an “in-depth independent inquiry” into their handling of the COVID-19 crisis in prisons.

“This lockdown, this isolation that they are subjecting these people to, is damaging,” Latimer said. “And they’ve allowed it to happen on a massive scale.”

Here's the full update from the Office of the Correctional Investigator: 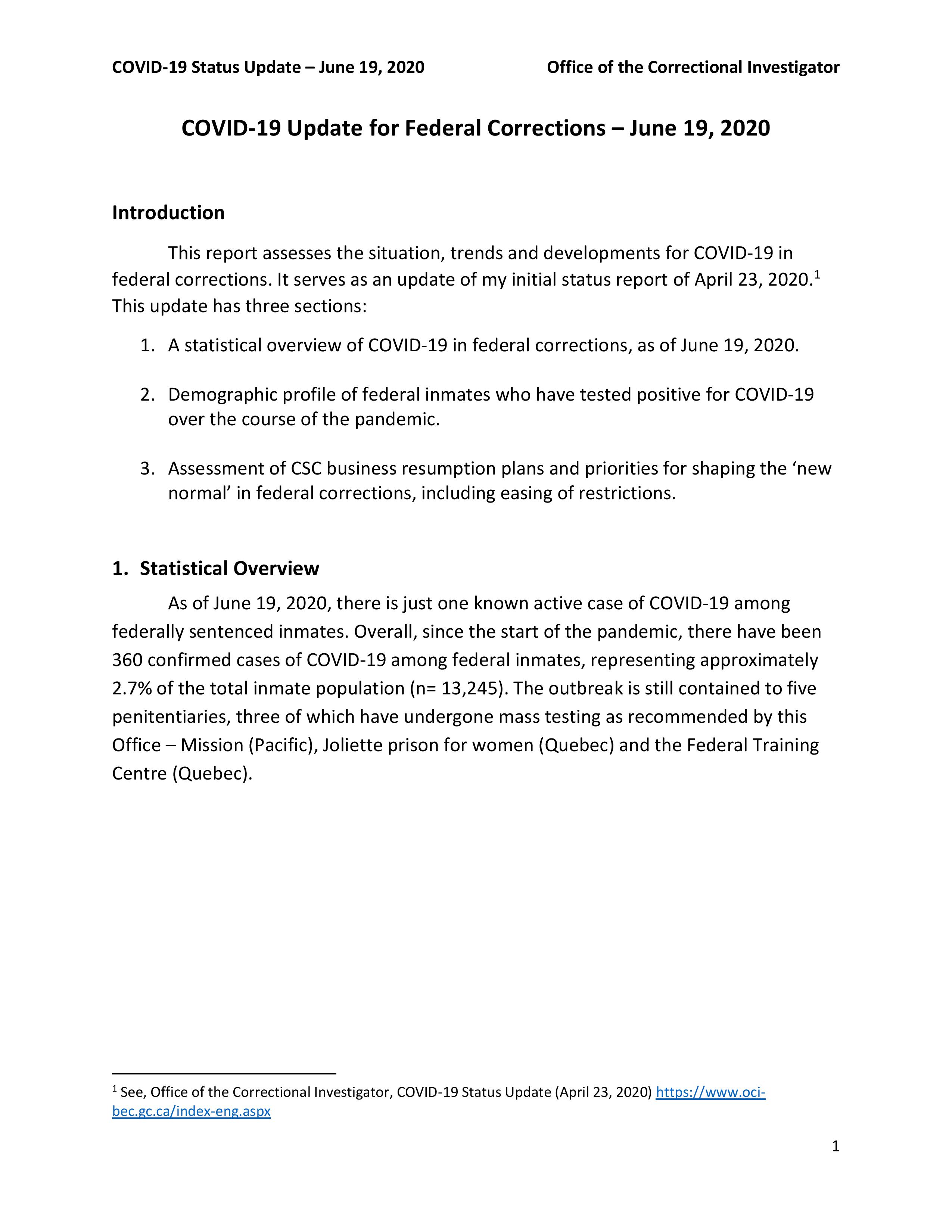 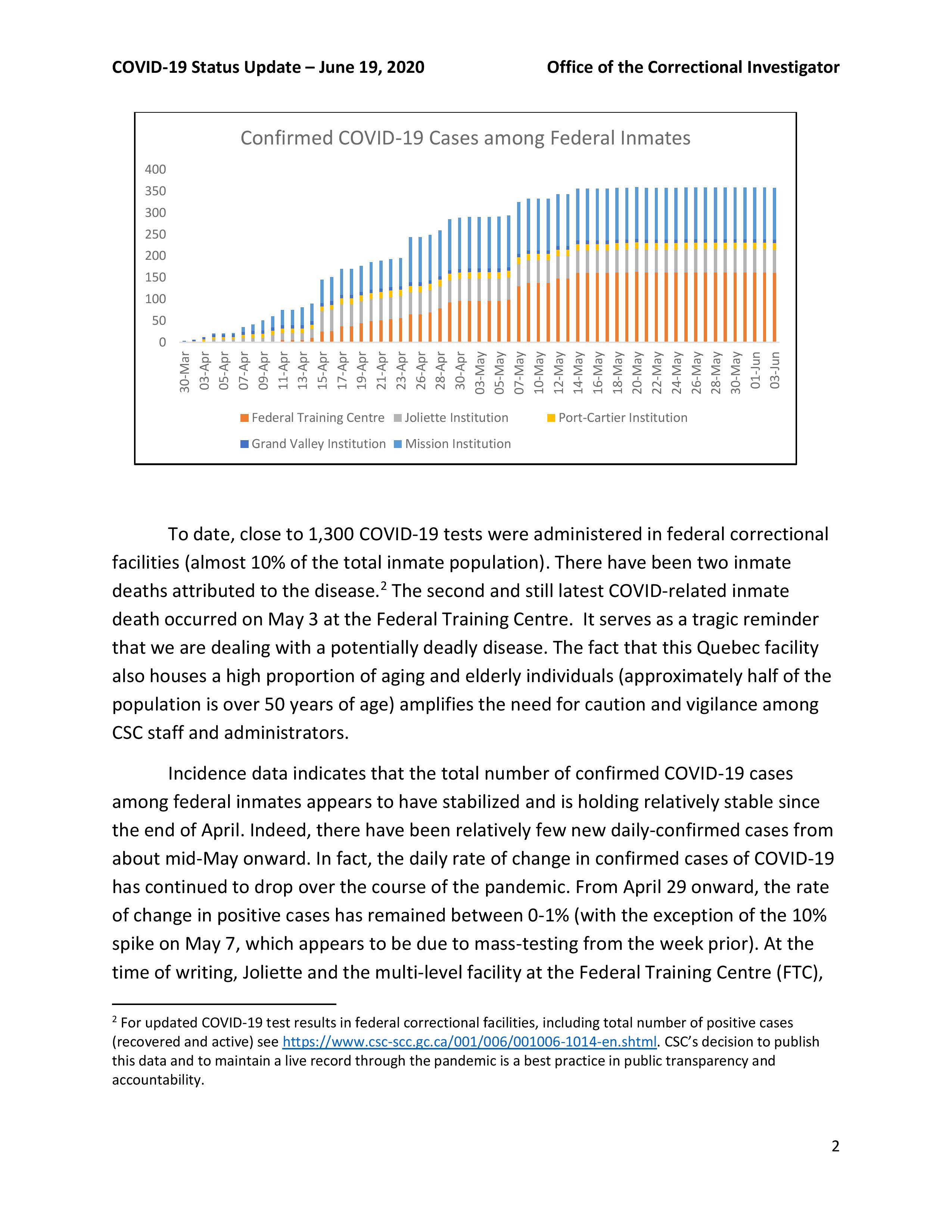 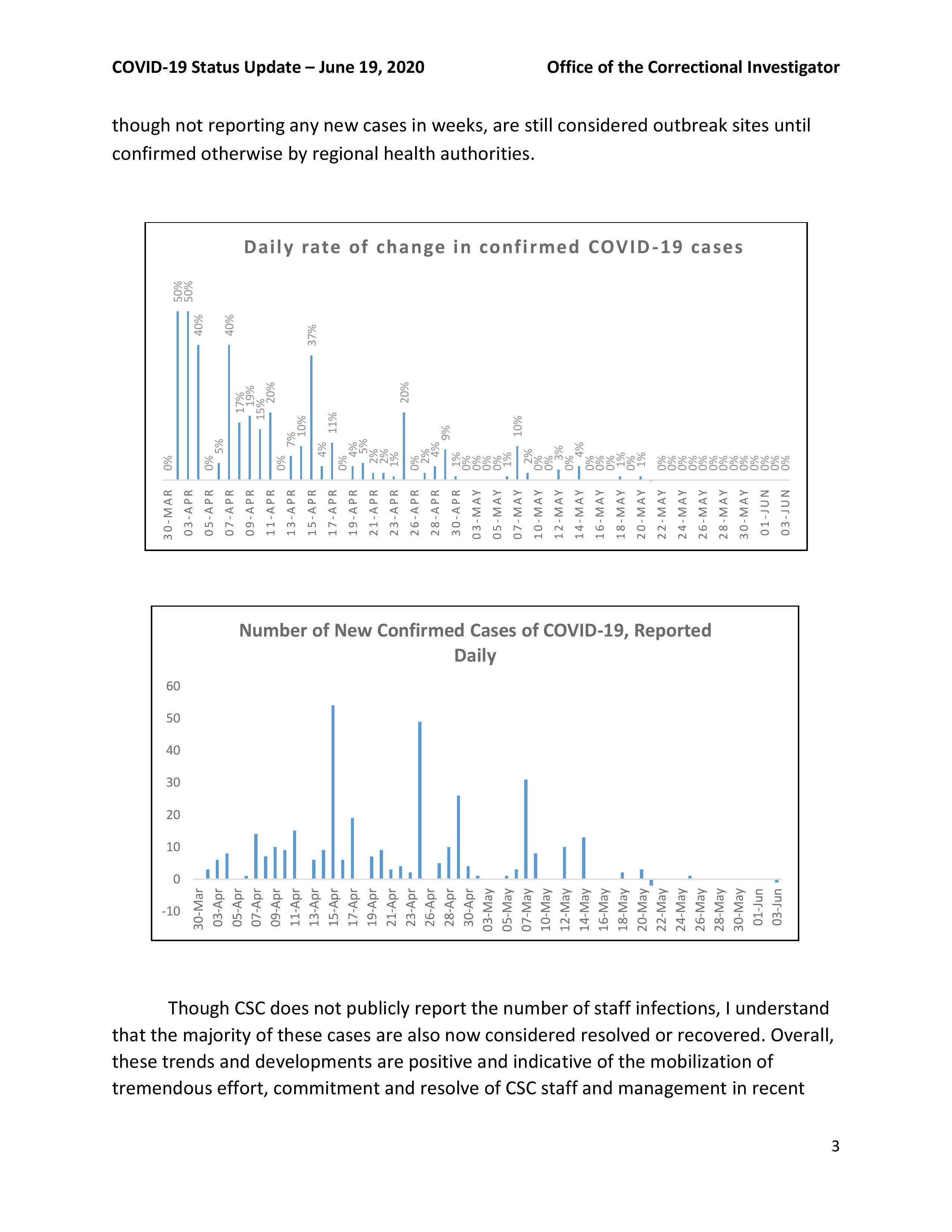 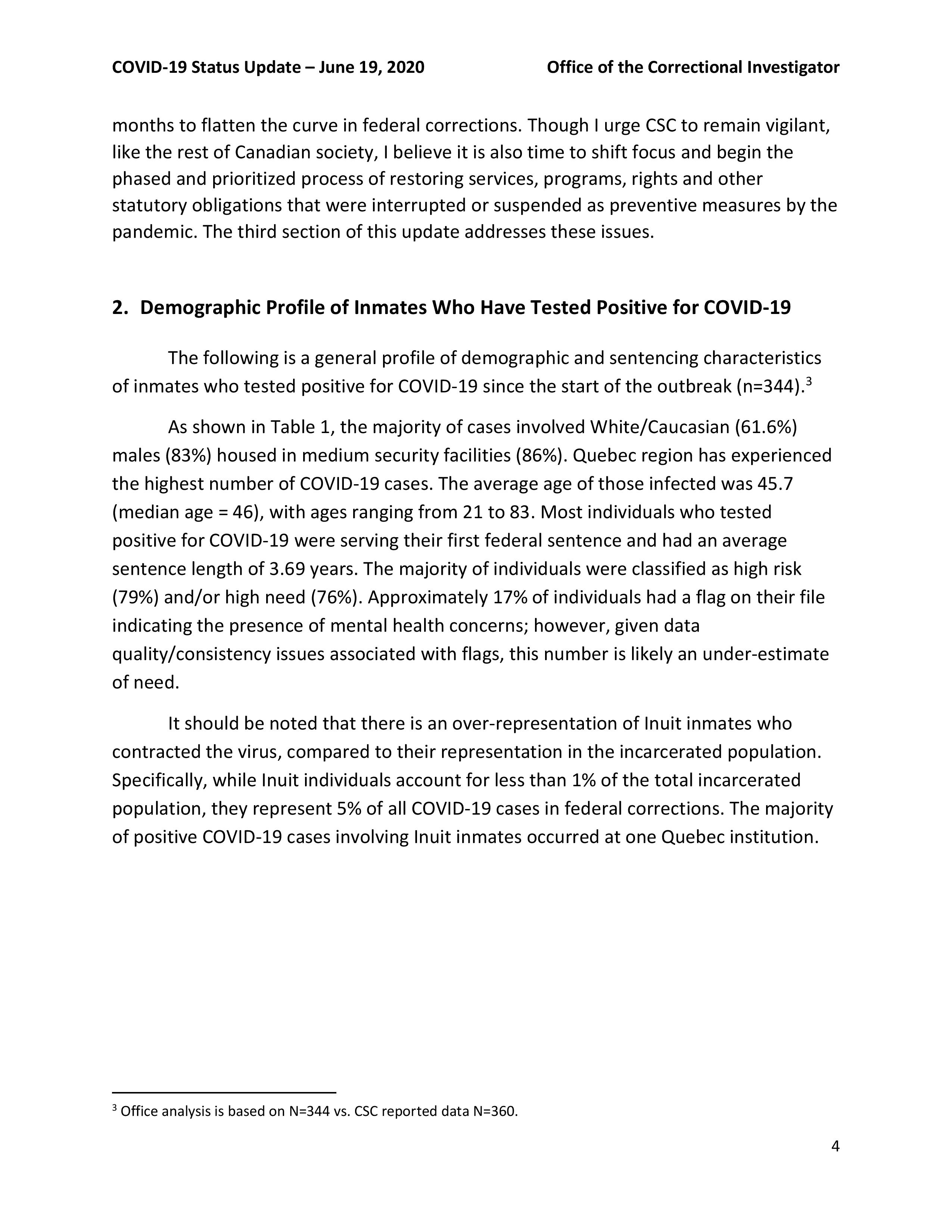 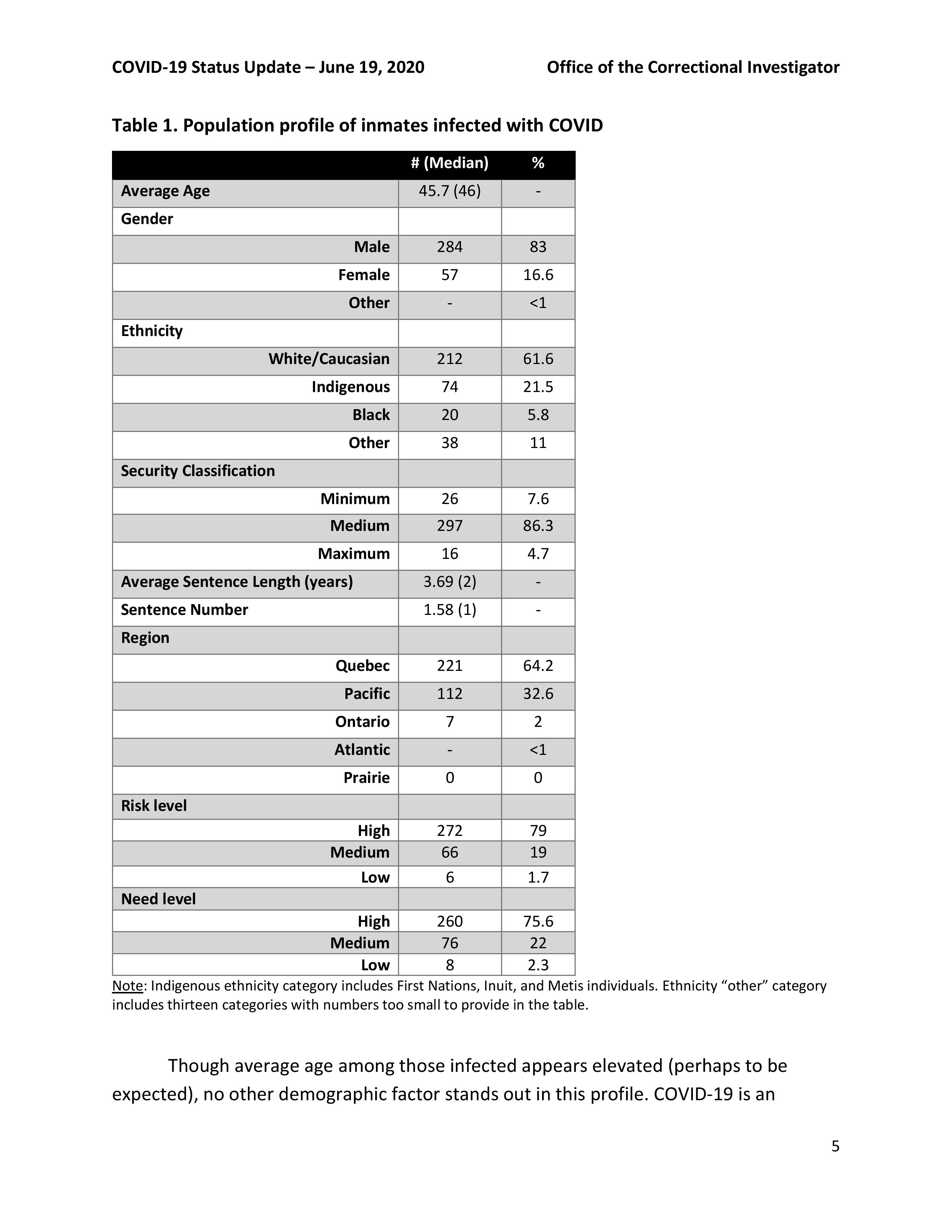 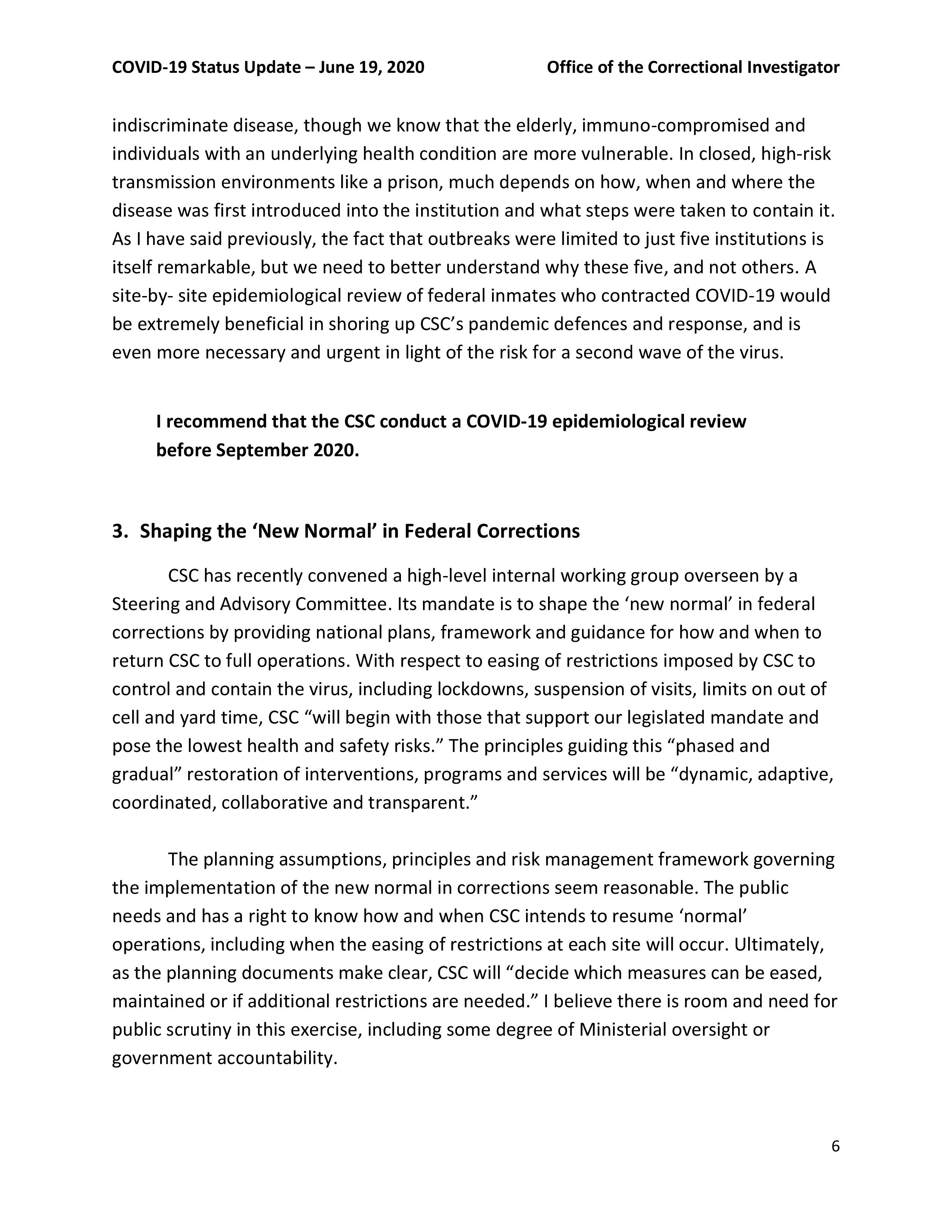 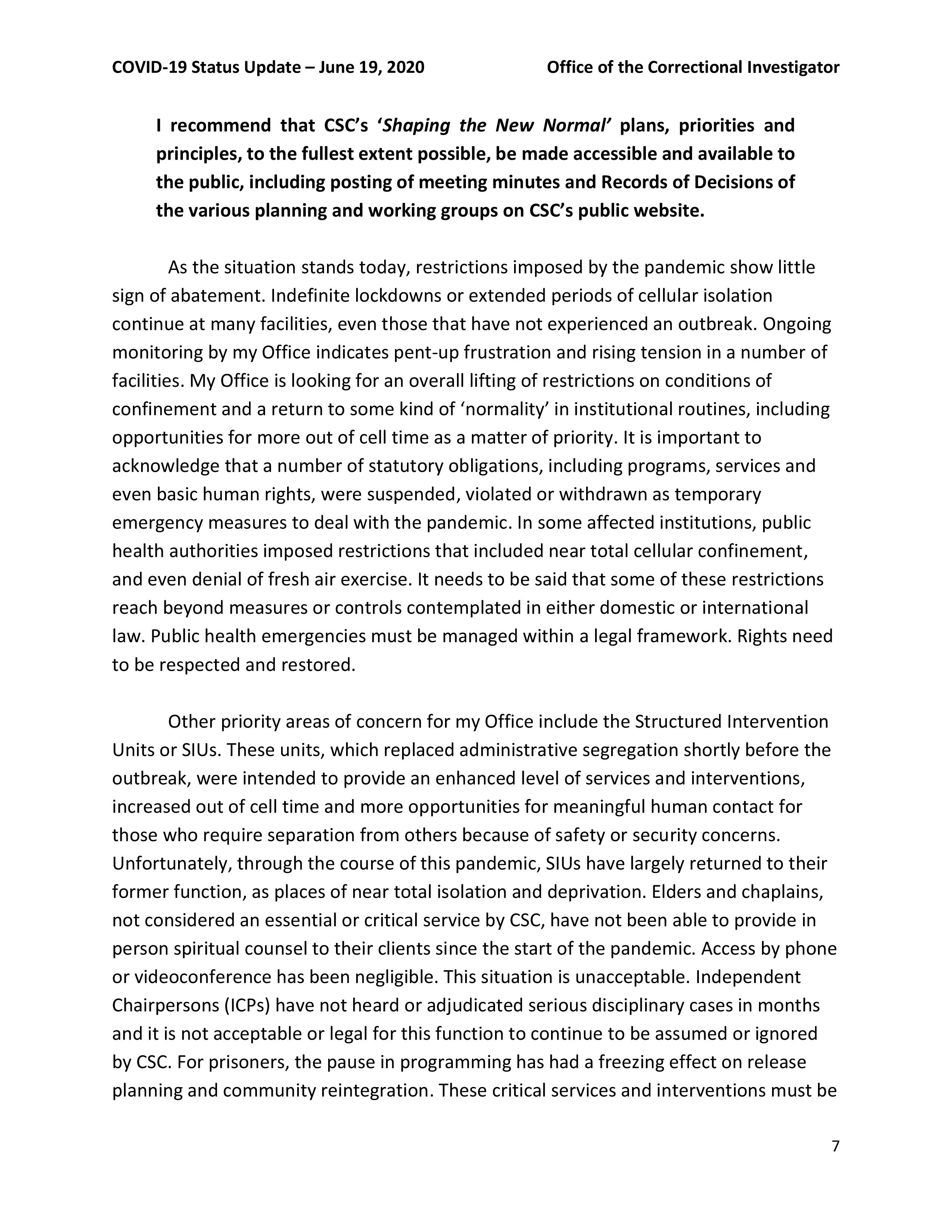 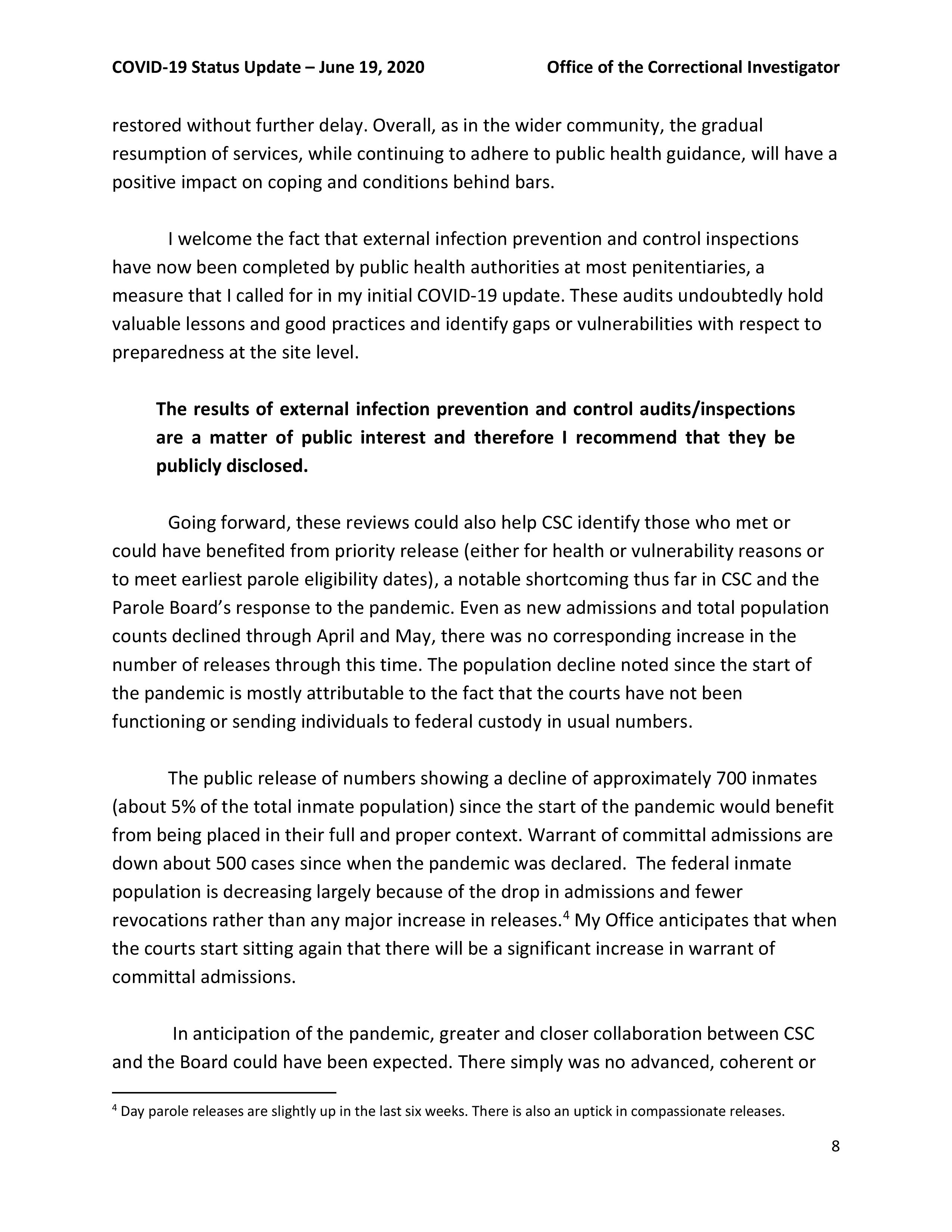 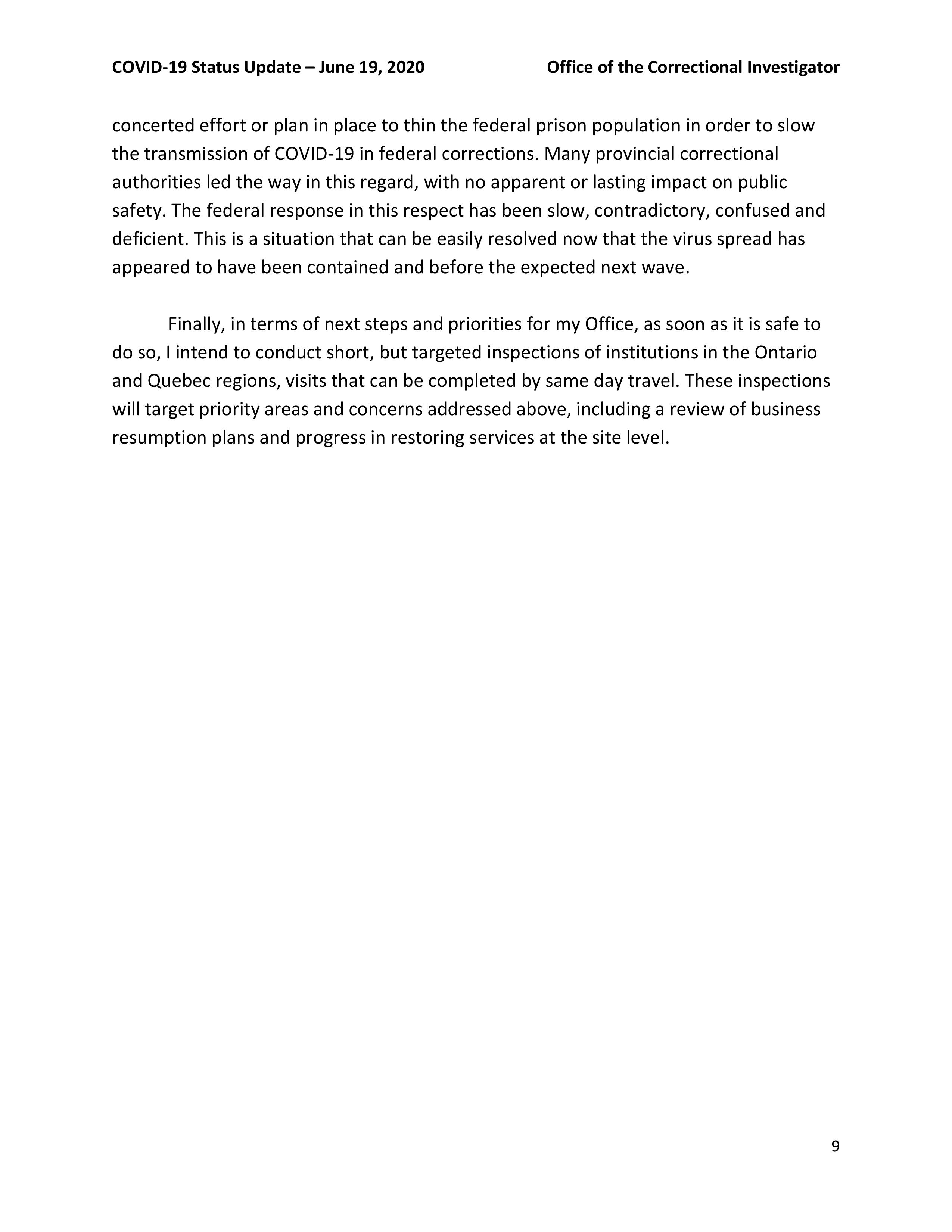 This article has been updated with comment from Correctional Service Canada.

Coronavirus
COVID-19: What you need to know for January 24
TVO.org staff