By John Michael McGrath - Published on Feb 26, 2016
Ontario is changing the way it helps low-income students at colleges and universities.

Update: After providing confusing information last week, the provincial government now says its tuition grants announced in the spring budget are not conditional on student cash up front. Read more.

One of the biggest items in Thursday’s Ontario budget is the promise of a new Ontario Student Grant, which will begin in time for the 2017 school year. Cobbled together from a number of existing grant programs under the Ontario Student Assistance Program, and supplemented by the cancellation of the tuition tax credit, the new grant will streamline the application process for students and make grants more generous for low-income students.

It won’t, however, amount to “free tuition” for low-income students. Not exactly.

Missed in all the celebration of the new grants is that the government is sticking to an existing requirement for students (or their families) to contribute $3,000 annually to access the grants. The government is, in this case, doing a better job of explaining the program than some headlines: backgrounders online show that while the grants are indeed increasing, the $3,000 contribution stays in every scenario the government uses to illustrate the increased effectiveness of the grant.

The government argues the $3,000 contribution is still an improvement over the status quo. “Previously, OSAP made a complicated determination about how much each student was expected to contribute from earnings, which often varied from year to year, depending on a number of factors,” says spokesperson Belinda Bien in the office of Minister of Training, Colleges and University Reza Moridi. The new rules will be much simpler, and if a student does manage to save up $3,000 it won’t count towards their assets for OSAP purposes.

Still, the $3,000 ante is there because, according to Bien, “postsecondary education is a shared responsibility between the government and students and their families, so they will continue to be expected to make a financial contribution.”

While the government is happy to see this described as free tuition, it’s at least as accurate to say the government is offering to sell tuition-sized grants to low-income students—for a sticker price of $3,000. 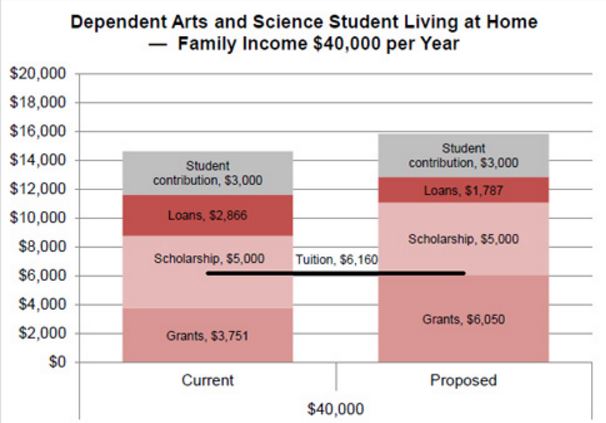 The caveats don’t end there: the government’s hypothetical “Alejandro”, who lives with his parents and has a household income of under $40,000, would receive $6,050 or nearly $2,300 more than he would under the current system. That would cover all but $100 of Alejandro’s annual tuition (whether this is “free” depends on if the reader feels charitable or not). More importantly, OSAP funding would be no longer contingent on parental contributions for low- and middle-income families.

The problems start if a student wants to pursue a more expensive degree program than the standard “arts and science” degree the government is using to calculate average tuitions. The government is making $6,000 grants available. But the tuition for undergraduate law at the University of Toronto is $31,700. For engineering at Western, it’s $13,300. If you want to study architecture at Carleton it’s $10,300.

The government says that students applying for more specialized programs will be supported by the existing Student Access Guarantee, where a portion of university tuition revenues have to be set aside for students whose needs aren’t covered by OSAP. But Moridi staffers concede the guarantee isn’t perfect and they’ll have to scrutinize post-secondary institutions to ensure no low-income students get left behind.

There are some other potential asterisks with the Ontario Student Grant program that will need to be clarified. Notably, all of the government’s projections are conditional on “implementation of the 2015 federal Liberal platform commitments regarding Canada Student Grants.” However, the Liberals under Kathleen Wynne have been getting along well with their Ottawa counterparts so that is unlikely to be a show-stopper. Indigenous students will see $97 million over three years to improve access to colleges and universities, but the details are still being worked out with First Nations representatives. The government says the new financial assistance won’t affect indigenous students’ eligibility to the Ontario Student Grant regardless.

Those are just some of the details that have yet to be worked out. If the government is right, it will still amount to an easier-to-use and more generous system for student aid in Ontario that will provide substantial relief to 70 per cent of university students, and 90 percent of college students.

It just won’t be free.

Politics
Finance in 2020: Ontario provides update on spending and the deficit

ANALYSIS: There’s even more red ink on the books than was projected in the spring — but it will cost less than expected to pay down the province’s debt.