Doing their bit: How Ontarians bought up Victory Bonds for town pride — and to help win the war

After Canada entered the First World War, small towns and big cities across Ontario stepped up — thanks in no small part to government propaganda
By Jamie Bradburn - Published on Nov 09, 2018
Victory Bond poster, circa 1918. (Archives of Ontario War Poster Collection. Reference Code: C 233-2-1-0-26. Archives of Ontario, I0016164.)

How do you pay for a war? The Canadian government financed its participation in the First World War in a number of ways. In 1917, for example, it implemented the personal income tax. And between 1915 and 1919, it ran five loan drives intended to convince the public to buy bonds. As the war wound down, though, they became a tougher sell — so the Victory Loan campaign of 1918 stressed the idea that purchases would give soldiers either a final boost on the battlefield or the means to come back home again. 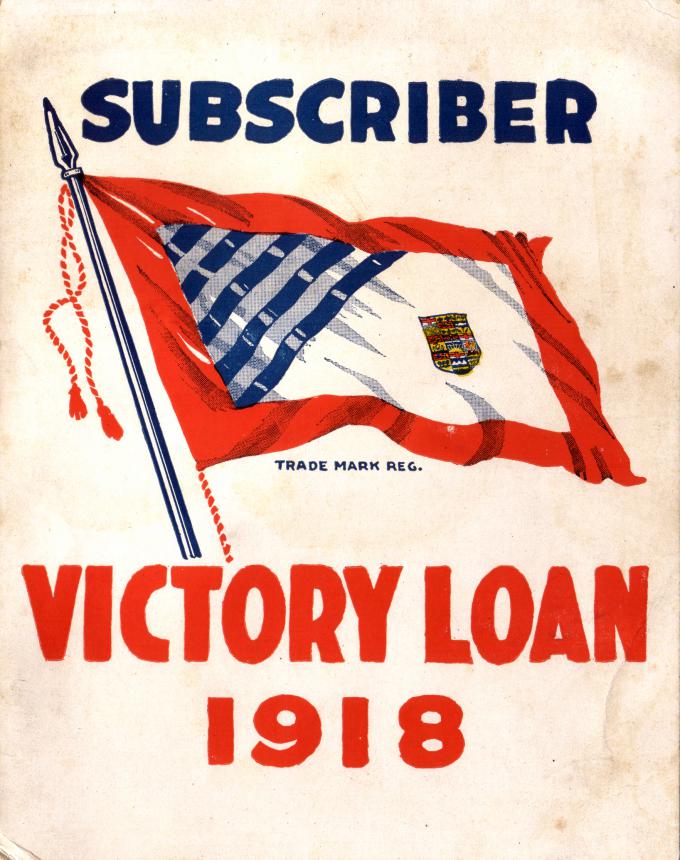 The 1918 bonds were sold between October 28 and November 16. Available in five- and 15-year maturities, they offered annual interest returns of 5.5 per cent. Buyers could choose between $50, $100, $500, and $1,000 denominations — a range of roughly $726 to $14,532 today — and opt to pay through an instalment plan. Cities, towns, and counties were given sales targets: those that reached them were rewarded with an “honour flag.”

Organizers of the drive — a mix of people from the government and the private sector — spent two months priming the public for it. Beginning on September 7, a series of ads and strategically placed newspaper articles urged people to practise thrift and deny themselves all unnecessary purchases. They were told to stop trying to keep up with their neighbours and to focus on making personal sacrifices to support the war effort. As one of the first ads put it, “The measure of your love of freedom is your willingness to deny yourself so that the strength of the nation for war effort will be increased.” They were assured that their contributions would go to financing everything from wheat production in the Prairies to the production of airplanes and munitions. 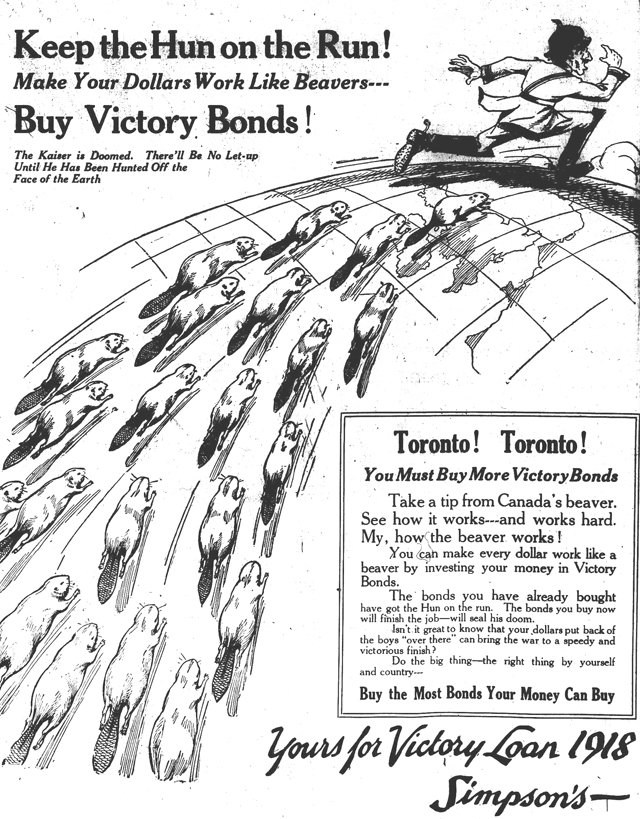 But the campaign soon encountered a major obstacle: the Spanish flu pandemic, which struck the province in October. Although many planned public events had to be cancelled for health reasons, national organizers used their power to convince municipal officials to make exceptions for drive-related rallies. They also came up with creative solutions: for example, Toronto had banned all large indoor public gatherings — so the official sales kickoff rally was held outdoors at Queen’s Park on October 27. Up to 35,000 people listened to sales pitches from Prime Minister Robert Borden, Premier William Hearst, and other federal and provincial officials, who delivered speeches from stages scattered around the park. “Every Victory Bond we buy will cheer the lads at the front, will keep strong the arms and stouten the hearts and brighten the eyes in the firing line,” Hearst declared.

Over the next few days, kickoff activities were held across the province at local businesses, public venues, and schools. In Windsor, fire bells rang across the city, and ferries sailing to Detroit tooted their support. Throughout Essex County, listeners were treated to patriotic music played on an early electronic instrument — the Deegan Una-fon.

People were encouraged to welcome canvassers instead of treating them like regular door-to-door salesmen. “He isn’t a nuisance,” noted an editorial in the Border Cities Star. “If he argues a bit, don’t get angry. His idea is to help you do what you know perfectly well is your duty.” The press printed heart-tugging stories of people scrounging up whatever they could to buy a bond. The Toronto Daily Star told the tale of Little Johnnie, a nine-year-old boy who, when a canvasser visited the pool hall he set bowling pins at, touched the man on the sleeve and said, “Please sir, I got 50 cents, all saved up, an’ I want ter buy ‘un of dem bonds.” 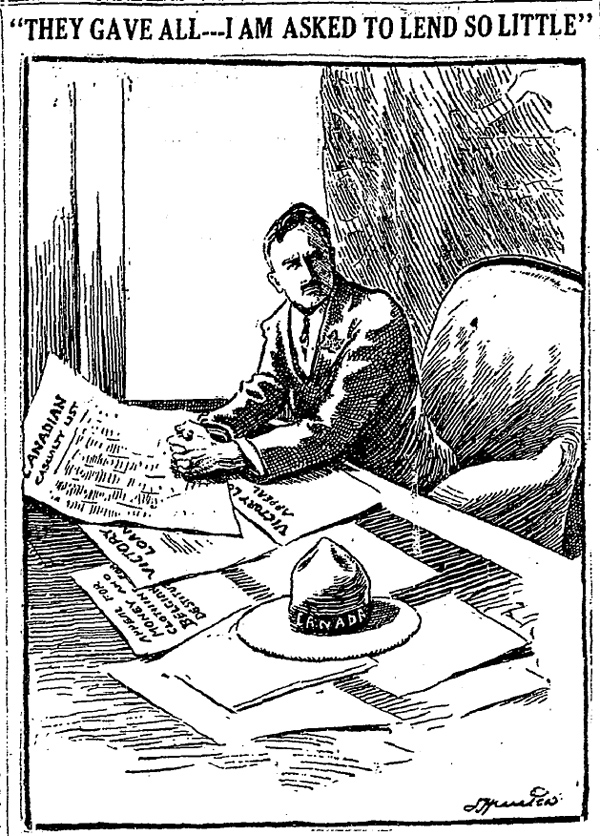 The campaign relied on shame as well as sentiment. As an ad prepared by the Leamington and Mersea Victory Loan Association put it:

It was impossible to escape the sales pitches. In London, streetcar conductors were asked to remind riders to buy when they called out stops, and hotel guests who asked for a wake-up call were greeted with, “Have you bought your Victory Bonds?”

The sales campaign settled into a routine of community meetings, parades, and rallies. On November 6, in Brantford, a parade set off from the city’s train station, headed by men costumed as John Bull, Jack Canuck, and Uncle Sam, all carrying the flags of the countries they represented. Prizes were given for the best-decorated cars participating in the procession, which was accompanied by fireworks. The parade ended at the local armouries, where provincial treasurer T.W. McGarry urged farmers enjoying war-fuelled prosperity to give all they could afford, and mayor M.M. MacBride told everyone that this was their last chance to do their bit for the war effort.

There was concern that the announcement of the armistice on November 11 would harm sales — so more pressure was placed on the public. The money raised, they were told, would help bring the troops home. “The Victory Loan must monopolize the attention of Canadians,” read an article placed in small-town newspapers. “There will be lots of time after the campaign to speculate on the prospect of peace.” Victory parades held on November 11 doubled as opportunities to sell more bonds. Celebrities made last-minute purchases: “America’s Sweetheart” Mary Pickford, a Toronto native who was a key campaigner in the similar Liberty Loan drives across the United States, made one to the tune of $100,000.

And stunts were staged: bond promoters outside the Toronto Daily Star’s office “offered a kiss from the lips of a lovely maiden to every man who bought a $100 bond.” According to that paper, the woman “entered into her work with zest.”

Certain realities of the war were downplayed in order to avoid harming sales. One pamphlet suggested that speakers at public events conclude their remarks by noting that soldiers died “with a smile on their lips because they had faith in their comrades and you.”

National campaign officials revealed the results of the drive during a rally at Toronto’s Massey Hall on November 19: it had produced more than $676 million of bond sales, surpassing the $500 million target. Ontario had sold nearly $330 million. Toronto managed to beat out Montreal for top city in the country, bringing in $145 million to the latter’s $143 million. Every county in the province managed to earn an honour flag.

There was one final drive, in 1919. The government reintroduced Victory Bonds during the Second World War — after that conflict, they evolved into the Canada Savings Bond program, which ran until 2017.