Does the public service prefer Liberals to Conservatives?

Civil servants are supposed to provide “fearless advice and loyal implementation” — but some critics question whether they have an anti-Tory bias
By Steve Paikin - Published on May 04, 2021
Eric Kierans, who was a cabinet minister in both Quebec City and Ottawa, reportedly stressed the need for communication between ministers and deputy ministers. (Peter Bregg/CP)

Last week, we devoted half an episode of our Democracy Agenda (plus my column in the Toronto Star) to examining the relationship between politicians and the civil service, whose mission is to advise those elected officials in their decision-making.

It was University of Toronto professor Joseph Heath’s new book, The Machinery of Government, that prompted the examination: Heath contends government has become so complicated that the bureaucracy has essentially taken powers unto itself previously thought to be reserved for politicians.

The program and column also raised troubling questions about whether the public service can genuinely offer “fearless advice and loyal implementation” to Conservative governments — or, because of anti-Tory bias, only to Liberal ones.

I got very useful feedback from both former cabinet ministers (of all party stripes) and public servants, who tried to explain how things really work.

Conservatives have long felt that the bureaucracy tries to stymie their agenda, and one senior federal public servant (who insisted on remaining nameless lest he lose his job for being so blunt) assured me that, in Ottawa anyway, Conservatives have reason to feel that way.

“I’ve attended meetings where initiatives are discussed that ‘can wait for the next government,’ [meaning the] Liberals,” this 25-year-veteran emailed me. “Put bluntly, the Conservatives impose cuts to staffing and programs. Nobody likes that. Would you support a party that openly criticizes you in the media, threatens to take your pay and benefits, and openly muses about layoffs and cuts? During the [Stephen] Harper years, these were regular media themes, and no civil servant has forgotten it.”

The bureaucrat concluded his email with a rather important question: “How can a civil service be truly non-partisan if one party threatens your job security?”

This public servant said he actually wanted to champion some more conservative-leaning ideas but that it was tough.

“I can tell you that in my experience, directives from any party stripe are implemented without fail from our professional public servants,” he wrote. “At the same time, the ones issued by Liberals are actioned with far more innovation and enthusiasm than Conservative ones.  Subversion?  Nothing so overt that I've witnessed. But it's certainly taboo to admit any Conservative leanings while Liberal ones are blatantly encouraged.”

How about at Queen’s Park? Charles Beer knows the issues there from both sides. In the 1960s and ’70s, he was in the public service while the Tories governed. In the late 1980s, he was a cabinet minister in David Peterson’s Liberal government.

Even though he leaned Liberal as a public servant, he says he found he could work easily with Tory governments, perhaps because partisanship wasn’t nearly as vicious back then and ministers’ political staffs weren’t so big and dominating.

When he became a minister himself, he told me in an email, “The public service were a source of great independent advice and support. That was my experience. I still maintain that some of the best and brightest people I ever worked for and with were public servants.”

However, when Beer became a political adviser in Dalton McGuinty’s government more than a decade later, politics had gotten meaner and political staffs much bigger.

“The minister needs to ensure that the usually much younger political staff are respectful of the public servants with whom they have to work,” Beer added. “Today with the growth of civil society and social media, the pressures on the democratic process are greater than when I was there at any point in my career.”

In the early 1980s, George Taylor was the PC government’s solicitor general. The opposition Liberals of the day in fact feared the public service was stacked with Tory loyalists, and, yet, Taylor emailed me, “I do recall a couple of instances where the wheels did slow down by civil servants who did not like our ideas.” Having said that, Taylor concluded that the public service was professional, helping both his PC government and the ensuing Liberal government implement their respective agendas.

One theme that frequently recurred in the feedback I received was the importance of mutually respectful, collegial relationships between ministers and their deputy ministers. In 1985, when the government of Ontario switched from PC to Liberal for the first time in 42 years, the outgoing premier’s deputy minister, Ed Stewart, was apparently extremely helpful with the transition, despite the fact that his career had blossomed under the Tories and would now be over under the Liberals.

“Ed held numerous meetings with [incoming premier] David [Peterson] and our senior staff for briefings on the status of government,” emailed George Hutchison, who became Peterson’s press secretary. “I'm sure he alerted us to potential potholes.”

Beer says he was once told this story by Eric Kierans, who was a cabinet minister in both Quebec City and Ottawa.

“Kierans said he would tell his deputy minister, ‘Here are the issues that are critical to the government’s (and my) success. I will be focusing on them. What I need from you is to alert me if there are problems that I should know about. Neither of us wants to be blindsided so we need to communicate well with each other.’ I always thought that was good advice for a democratic state which needs able politicians and able public servants.

“You don’t have to agree on everything,” Beer concluded, “but you have to be able to speak frankly and in good faith. If the three worked well together, democracy was well served.” 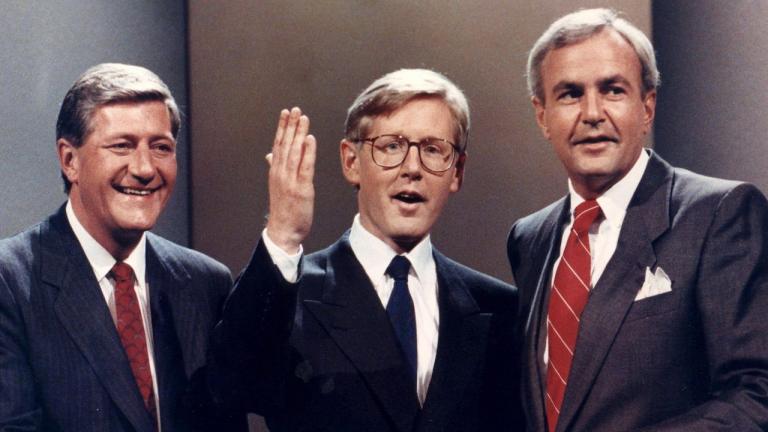