Does Ontario need a cohesive national plan for northern infrastructure?

By John Michael McGrath - Published on Jun 07, 2016
A University of Calgary report says Ontario and other provinces should build a mid-Canada transportation corridor.

Ontario’s north is vast, underpopulated, and crying out for infrastructure spending, as communities and First Nations in the north do without reliable energy, road, and water connections.  But a new paper from the University of Calgary says Ontario and all other provinces have been building north-south connections to their hinterland when they should have been thinking east-west—and bigger. 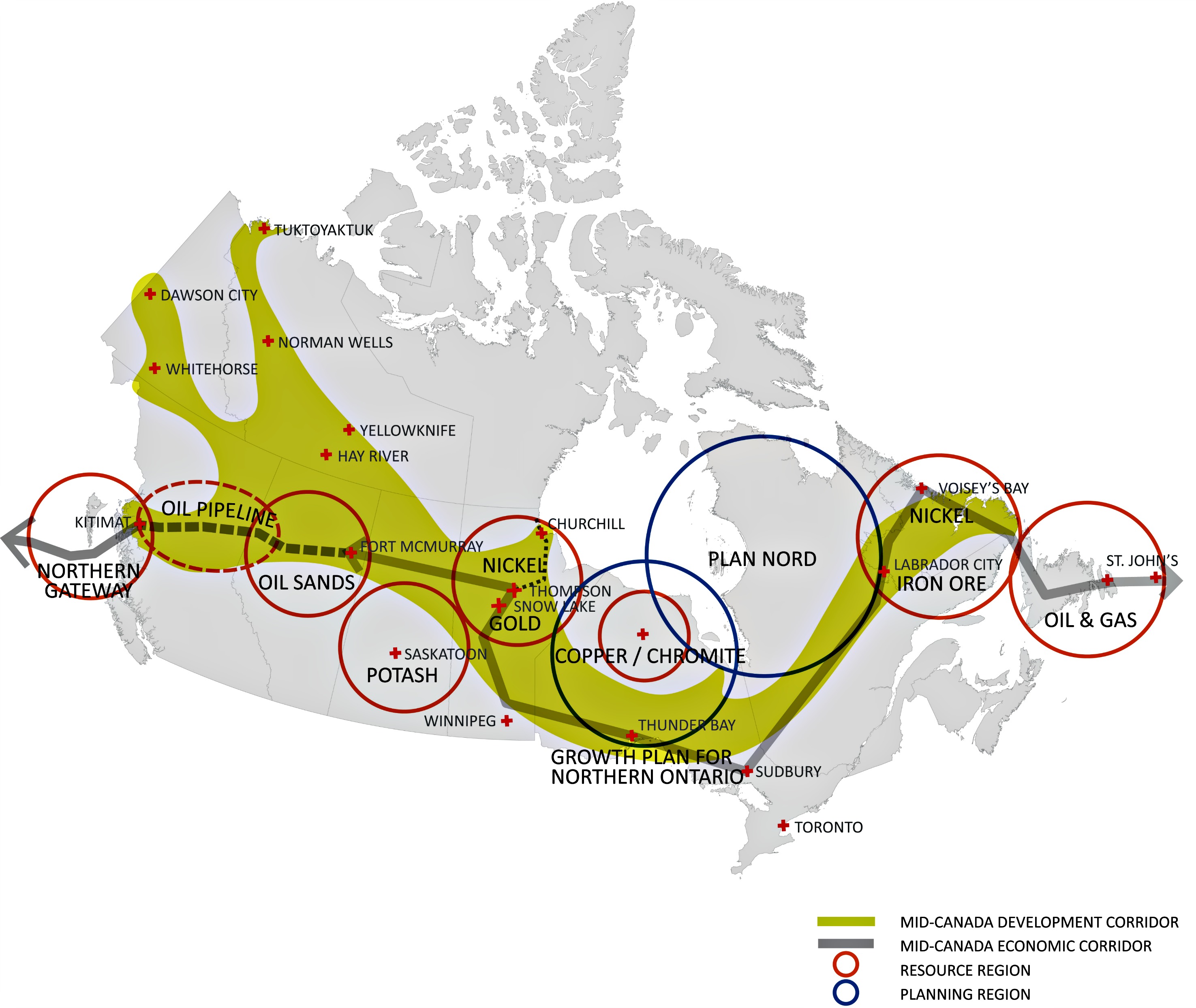 It’s variously called the northern corridor, the mid-Canada corridor or simply the corridor, but the concept is relatively straightforward, if a bit grandiose: a new east-west road, rail, and energy artery in the country’s north. It would reach from the Pacific coast, across the west, through Ontario’s James Bay lowlands, and east to Atlantic ports.

Proposed in various forms since the 1960s, the corridor idea got more prominence in an article in The Walrus in 2014 by John van Nostrand of the Toronto planning and design firm SvN. Now, a new paper from the University of Calgary’s School of Public Policy agrees with van Nostrand, saying it’s time to give the idea serious study again. In part that’s because of increased political attention to the difficulties of moving Albertan oil south via pipelines. But the Ring of Fire, a large mineral deposit in Ontario’s northwest, is another potential beneficiary.

“It’s still very speculative, absolutely,” says Kent Fellows, research associate at the University of Calgary. “But I think the Ring of Fire is a great place to start because of the work that’s been done already and because of the private sector support there.”

The idea of mining the nickel and chromite in the Ring of Fire has had substantial political support since their discovery last decade, but getting infrastructure built into the remote region has taken longer than expected. Early optimism about the Ring of Fire being “Ontario’s oilsands” and leading a boom in the north has given way to skepticism about how long it’s taking to approve and fund a land route there, either by road or rail.

“The idea is to get out ahead of this with planned infrastructure in the north, instead of the hodge-podge we have now,” Fellows adds.

The distinction between “planned” and “hodge-podge” development is key: provinces have spent large sums of money on big projects in their north, whether it’s the oil sands in Alberta or Quebec’s James Bay hydroelectric dams. What’s been missing, says Fellows, is a coherent national plan for the north. The choice has economic and environmental costs.

“Someone proposes an oil pipeline here, a road here, a rail line here... What that means is we get a spider web of different transportation modes, and we end up affecting more of the environment than is necessary.”

Of course, a corridor would have its own financial costs: Fellows’ paper estimates (with an admittedly large margin of error) that the cost of a corridor could be on the order of $100 billion.

Charles Cirtwill, CEO of Northern Policy Institute, says that number has to be put in the context of the infrastructure that provinces are already building in the north.

“We’ve always built the pieces that made sense to provincial governments at the time … Quebec did it with their hydroelectric projects, Alberta did it with their oil sands, British Columbia and Saskatchewan are doing it. The difference is instead of having one conversation with the federal government at the table, we’re having seven different conversations that are coming to totally different answers.”

Cirtwill says that while the price is an obvious hurdle, large institutional investors are looking for predictable, consistent returns that large infrastructure projects can provide. He also suggests First Nations may want to invest in infrastructure projects that will benefit their communities with the proceeds of land claims settlements.

It’s not clear, however, that Ontario’s mining industry is eager for a major rethink of infrastructure in northern Ontario. Noront, which discovered the Ring of Fire, has spent years developing and promoting an east-west road from the Ring of Fire to Pickle Lake, where the provincial highway system currently ends. KWG, another firm in the region, prefers a north-south rail line. Neither plan is obviously compatible with the corridor vision—both are the kind of incremental, minimalist (but efficient) approach the corridor is supposed to avoid.

Noront’s CEO Al Coutts told a mining conference last week, however, that he’s agnostic on the route into the Ring of Fire, saying Noront is a mining company and not an infrastructure firm. 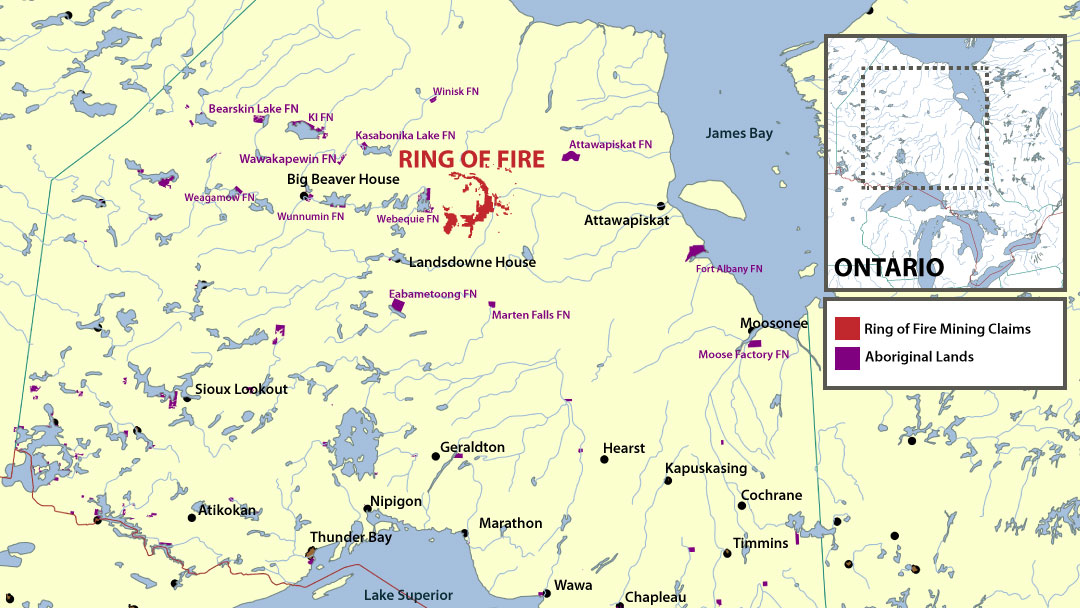 “If there’s a sound feasibility study that’s publicly available, if there’s financing that is really there and in place, if there’s a consultation process with First Nations and an environmental assessment done, we would back any infrastructure proposal for the region,” Coutts said.

Coutts’ predecessor at Noront, chairman emeritus Richard Nemis, says the development at the Ring of Fire could proceed with a northern corridor just as well as with a more modest road or rail proposal.

“Once the corridor is built, you can branch off wherever you want. The key thing is to get the roads built first,” Nemis says. “Whatever infrastructure opens up the north is good for the north.”

Nemis, like others in the industry, is frustrated by the slow pace of progress in building infrastructure—something he ascribes to the lack of attention generally paid to northern issues by Queen’s Park.

“The whole country will benefit from this,” Nemis says. “The benefits for Canada here are going to be enormous… it seems like they just set up committees, but don’t seem to get much done.”

The Ontario government isn’t champing at the bit to upend its plans in the north, however.

“Clearly it’s still very speculative,” says Minister of Northern Development and Mines Mike Gravelle. “As you know, we’re engaged in negotiations with the Matawa First Nations on transportation options for the Ring of Fire.” He says he’s heard the complaints from miners about the slow pace of progress, but emphasizes the care that needs to be taken when negotiating with First Nations.

Gravelle says the provincial government is expecting a study to be complete “very soon” that will inform the decision about whether Noront or KWG’s proposal goes forward. He rejects the notion that provincial small-mindedness has stalled national infrastructure planning.

“I, quite frankly, see this as the province taking on the responsibilities we need to,” he says. “That’s not to say we shouldn’t be having larger discussions, but I think we in the ministry need to stay focused, and stay on track.”

The province released updated modelling Thursday. Read what it has to say about hospital capacity, case counts, and what may lie ahead.