Doctors vs. teachers: Who’s getting better treatment from the Ontario government?

By Steve Paikin - Published on Aug 26, 2016
Both physicians and educators feel they've deserved better from the Ontario government.

Every now and then someone puts something out there on Twitter that provokes a truly interesting conversation.

Such was the case about a week ago when someone asked me why the Ontario Liberal government seemed to be treating the province’s doctors so much more harshly than it did teachers when it came to contract negotiations:

Then, I noticed columnist Kelly McParland told his readers in the National Post: “While teachers’ unions are coddled at every turn…the doctors are portrayed as greedy and out of touch.”

After seeing Rennick’s Twitter comment, I tweeted back almost instantly: “There’s not a teacher in this province who will agree with your characterization that they got treated with a velvet glove.”

Reaction to that came in swiftly and it was overwhelmingly uniform in sentiment: 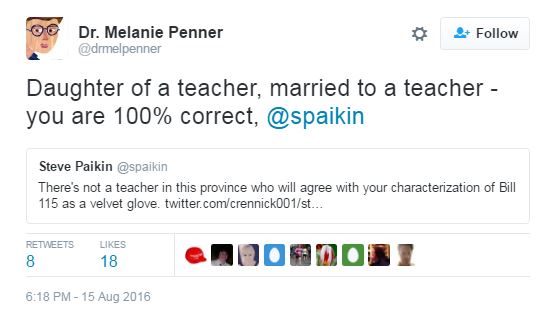 It’s not often I hear that said about something I say, so I confess, I did read Dr. Penner’s tweet with some glee.

However, perhaps it’s not surprising that Rennick and McParland thought this government had a soft touch for teachers and an iron fist for doctors. After all, this government’s tight relations with the public sector unions are no secret.

Between elections, the Liberals and the public sector unions can go at each other with the best of them. But during election campaigns, those same unions always seem to pony up with significant contributions in money and volunteers to the Grits.

Memory understandably fades. But that shouldn’t obscure the fact that in their more than 12-year relationship, the Ontario Liberals and the teacher unions have reached rock-bottom on a few occasions, prompting some teachers to say to me that these Liberals were actually worse than Mike Harris’s Progressive Conservatives. For a teacher to say that — well, that’s really saying something.

But let’s recall our history.

In 2008, when Kathleen Wynne was education minister, she offered all the teacher unions generous, multi-year settlements. The only catch was the teachers had to take the offer immediately. They all did with one exception: the Elementary Teachers’ Federation of Ontario. It thought its members were already too far behind their colleagues in the secondary and Catholic systems and so their leadership decided to go for broke and demand more, assuming Wynne would fold.

She didn’t. And as a result, the elementary teachers did worse. It put relations between them and the government quite far back.

But the best (worst?) was yet to come. After the state of Ontario’s books took a massive hit during the Great Recession, then-premier Dalton McGuinty released a YouTube video in which he revealed he would be asking the teacher unions to freeze their salaries and give back benefits the teachers had earned at the bargaining table over the years.

That bill gave the government the right to force a settlement if one couldn’t be reached by a McGuinty-imposed deadline. It also curtailed the ability of teachers to strike. While the government claimed it saved taxpayers $2 billion, you can guess how the teachers reacted to it. Many withdrew their supervision of extracurricular activities in protest, and some staged one-day strikes so as not to run afoul of the law. The unions ultimately took the government to court, claiming Bill 115 was unconstitutional, and guess what? They won.

However, by the time the verdict came down this past April, McGuinty was long gone, and his successor, Kathleen Wynne, had already sweetened the teachers’ compensation pot by a couple of hundred million dollars, which went some way to repairing relations.

If any of this sounds familiar, it should. Over the past few years, on several occasions, the Liberal government has unilaterally reduced the compensation it pays doctors. And just as the teachers took the government to court, the Ontario Medical Association is doing likewise, asking the judges to give them the same binding arbitration the government has offered nurses, firefighters, and police officers in the past.

All of which is to say, the next time someone tells you the Liberals have a history of going easy on teachers but hard on doctors, tell them the story is a little more complicated than that.

Coronavirus
COVID-19: What you need to know for April 15
The latest coronavirus updates from across the province.
TVO.org staff