ANALYSIS: Young scholars are borrowing billions to pursue their university educations. H.G. Watson introduces you to the company that’s profiting from their debt
By H.G. Watson - Published on May 29, 2018
If you’ve taken out a federal government student loan in Canada or called the National Student Loan Service Centre, you’ve interacted with DH Corp. (iStock.com/Hailshadow)

This is the second in a three-part series of stories about student debt in Canada. You can read Part 1 here.

If you know what DH Corporation does, it’s safe to say you’re a certain breed of financial nerd — the company isn’t generally well known.

But if you’ve taken out a federal government student loan in Canada or called the National Student Loan Service Centre, you’ve interacted with DH Corp. That’s because it’s the most recent contractor to administer the Canada Student Loans Program since direct government loans were put in place in 2000.

CIBC and USA Education Inc. did not hold on to Edulinx, the company that originally ran the National Student Loan Service Centre, for long. In 2004, Nelnet, an American student-loan provider, bought the company for an undisclosed sum. In 2007, Edulinx traded hands again after Nelnet sold it to Resolve, a former subsidiary of another American company, First Service, for $13 million plus a percentage of incentive revenues earned until March 2008.

In 2012, Resolve was acquired by DH Corp., and Edulinx found itself with its fourth contractor in 11 years. The Canadian company, established in 1875 and until 2014 known as Davis and Henderson, had focused primarily on the production of cheques, but in the early 2000s, it started moving into financial technologies aimed at digitizing financial transactions. Another large component of its business was student loans.

DH Corp. runs the National Student Loan Service Centre, responsible for “the administration of student loans and grants,” as a spokesperson for Employment and Social Development Canada explained to me in an email, while the government “remains responsible for policy development, financing of loans and grants, accountability and overall oversight of the program including oversight of the contract with DH Corp.”

The contract with the federal government also includes the Canada Student Grant (which awards non-repayable federal grants to students) and the integrated provincial federal student loans of Ontario, Saskatchewan, New Brunswick, Newfoundland and Labrador, and British Columbia (including the student grants they distribute). As of 2016, the company also has separate contracts with Prince Edward Island, Nova Scotia, and Alberta.

The amount of revenue DH Corp makes is directly connected to how many students are participating in loan and grant programs. “[The DH Corp.] contract’s fee structure is based on specific fees for services offered by DH Corp. for each borrower currently in the programs,” a ESDC spokesperson wrote. “As a result, when the number of student loan borrowers enrolled in the Canada Student Loan Program and/or provincial programs increases, resulting in higher workload, the fee paid by Canada to DH Corp. also increases.”

The company’s 2015 annual report sheds more light on how it makes money from the CSLP: “Revenues from the student lending program are primarily earned based on the number of student loans managed by [DH Corp]. We also earn incentive-based revenues from targeted improvements to our clients’ specific lending programs, along with revenues from professional services work connected to program enhancements requested by the lenders.”

In 2015, federal and provincial governments were large clients for DH Corp. “Our Canadian operations remain dependent upon certain significant customers and several large mortgage intermediaries, such as independent mortgage brokers, as well as a significant contract with the Government of Canada in respect of the Canada Student Loan Program (CSLP),” stated the company’s 2015 annual report. The revenue from its seven largest customers accounted for 13 per cent of DH Corp.’s revenue in 2015. Its total revenue from lending solutions in Canada, which included their collateral management solutions, mortgage origination and student lending, was over $367 million in 2015 (a 5.4 per cent increase in revenue over the previous year) — a not insignificant part of the company’s more than $1.5 billion in revenue that year.

DH Corp.’s contract with the federal government was set to expire in March 2016. Its 2015 annual report acknowledged that should the contract not be renewed, “there could be material adverse effects on our business.”

The company was facing outside challenges that year. DH Corp., which at that time was a publicly traded company, was the subject of a damning report written by a small American hedge fund, Lawton Park Capital Management. According to the Financial Post, the fund “accused DH of masking weakening performance with ‘desperate M&A and accounting tricks.’” The Canadian Press reported that “the [Lawton Park] report takes issue with DH’s approach to accounting for its revenue and alleges that ‘numerous’ insiders of the company have been selling their shares, which could indicate trouble brewing that the public isn’t aware of.” DH Corp. emphatically denied these claims, but the damage was done — its stock fell as much as 25 per cent that week, according to the Globe and Mail.

ESDC’s spokesperson, though, said in an email that there were “no concerns raised within ESDC Learning Branch regarding DH Corp. investors’ activities in 2015, and these activities had no impact on the contract or the activities carried out under the contract.” (Representatives from DH Corp. directed questions to ESDC.)

However, DH Corp. didn’t lose its government contract: on April 4, 2016, the company was awarded the contract to run the Canada Student Loans Program until 2026.

We don’t know how much revenue DH Corp. currently makes from lending, because it is no longer a publicly traded company. In 2017, it was purchased by an American investment firm for $2.7 billion and merged with a British financial technology company called Misys, forming Finastra (the ESDC says the merger had no impact on its contract with DH Corp; the terms remain the same). According to the Financial Post, the DH Corp. brand was kept intact for its Canadian business, including student loans. The CEO of the combined company, Nadeem Syed, said that Canadian business accounts for “upwards of 20 per cent” of all revenues for the new company. But that’s all we know — as long as DH Corp., and Finastra, is privately held, it doesn't have to release public quarterly or year-end reports — but it’s in charge of a contract that, from December 21, 2006 through March 31, 2017, is valued at $698,925,473.34.

H.G. Watson is a journalist based in Toronto. She is the managing editor of J-Source, the Canadian Journalism Project. 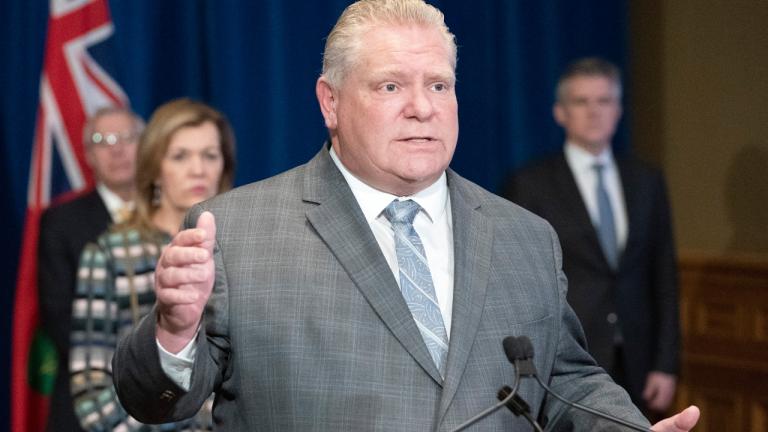