Craig Davidson: Driving a special needs school bus made me grow up fast

By Carla Lucchetta - Published on Aug 11, 2016
Author Craig Davidson (right) says his job as a school bus driver on a special needs route was "a life preserver."

In 2008, Craig Davidson was 29 with two books under his belt; one that did moderately well and gained him some attention and a second that “tanked abysmally.” He felt his dream to be a writer slipping away; in fact, he felt like a failure. He was broke, relying on his parents 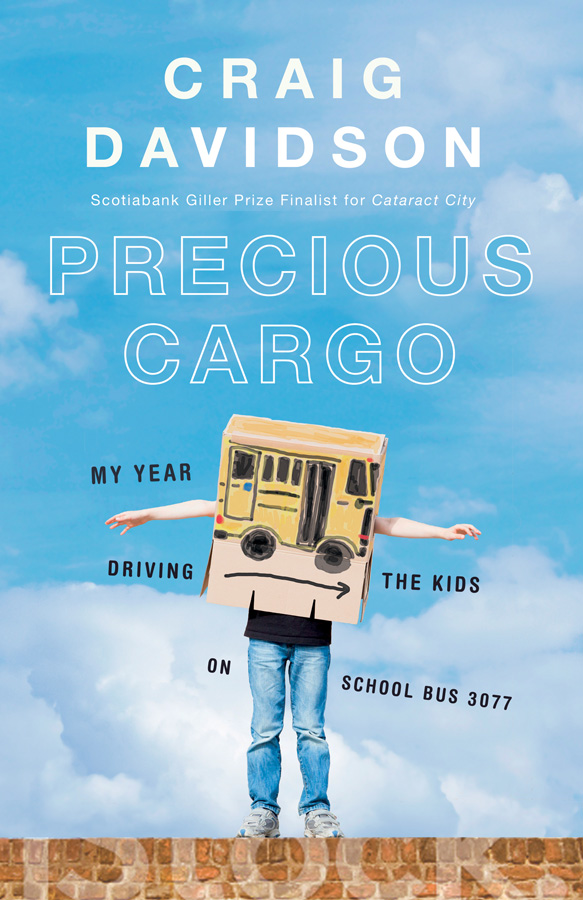 and at risk of losing his house in Calgary. In his memoir, Precious Cargo: My Year Driving the Kids on School Bus 3077, Davidson writes:

“Failure carries a weight. Nobody tells you this. Cinderblocks stacked on your chest and piled atop your skull; you develop a persistent slump, your shoulders rounded in defeat. People can sense it. They avoid you as if you’ve got scabies. That’s a wise decision. Being in the company of a failure isn’t pleasant. There’s a terrible desire amongst failures to pull someone else into their pit of despair so they can have company while they wallow.”

One day, he noticed a flyer advertising for bus drivers in his mailbox and he called to apply. He tells Nam Kiwanuka on The Agenda in the Summer, “It was a case of mutual desperation.” They needed drivers; he needed a job. “It was a life preserver,” he says. “I could still write so it was a perfect type of part-time arrangement.”

Once his training was complete and he’d learned to drive the long bus (a skill that takes some time, given that the vehicle can swing several feet either way when it turns corners) and the short one meant for special needs children (which required a sensitivity with which he had little experience and learning how to strap in wheelchairs, with some buses being more technologically updated than others), he was ready for his assigned route. Choosing one close to home meant that it would be a special needs route. He hesitated only for a few moments before saying yes.

“Like many decisions in my life, this one was seemingly made on a whim,” he writes. “Fate throws down its gauntlet: Will you accept? But the truth was, this challenge was fine with me; there were few people more in need of a drastic change.”

What he didn’t anticipate is how attached he would become to the precious cargo he drove to and from school.

Jake, 16, had cerebral palsy from birth and used a wheelchair; Gavin and Oliver, both 13, had fragile X syndrome, a genetic condition that affects growth and intellectual development; Nadja and Vincent, both 17, had disabilities that meant they were behind their cohort intellectually. (In the book, Davidson changed all the students’ names). Davidson seemed determined to make their experience on school bus 3077 as pleasant as possible, for them and for him.

“I wanted the kids to feel free to engage with each other and with me. And as they got used to me over time, those kids really did talk. About movies and sports and music and television and friendship and love and families and a million other topics. Mainly, though, the kids told stories. Their imaginations were astonishingly unbridled. And their stories were instructive – a window into their worlds and dreams. Every so often they broke my heart.”

It didn’t take long for Davidson to feel protective of the kids. The constant taunting they had to endure enraged him to the point where in a few cases he got into physical altercations with the culprits, and in one case, the father of a particularly offensive teen.

“Didn’t the looks bother [them], though? The pointing, the laughing? I’m not sure they did – or if so, my kids didn’t notice, didn’t mind, or had learned to accept how they were sometimes viewed. … So the problem was one of perspective – my own. I wished for an inclusivity most of those kids didn’t necessarily crave (or perhaps, with a maturity outstripping my own, one they understood wasn’t feasible).”

When Kiwanuka asks him about these moments that “overwhelmed” him, Davidson says, “What I ultimately had to accept is these kids didn’t like that. Me doing those sorts of things was forcing them to listen to a frequency that they’d learned to tune out. And it was the frequency of pure ignorance of people being cruel. I couldn’t accept it. I still can’t accept it.”

Though he developed camaraderie with all five kids, he became particularly close with Jake – a relationship the boy’s father encouraged. Four months prior to that school year, Jake, his mother and sister were hit by a drunk driver while they were out for a walk. Jake’s mother died from her injuries and Jake was severely injured. “When I picked him up, it was his first day of school since the accident,” he tells Kiwanuka. “That was one of the major things I grappled with – that it feels like some people, some families seem to be anointed for a degree of suffering so out of whack and so unfair with other people.” In Jake, Davidson saw a gifted storyteller and part of their rapport was as writer to writer.

Things weren’t always smooth and the kids had their difficult moments, which Davidson sometimes realized and other times didn’t quite know how to handle and was just as happy to drop them off at home. One such day was Halloween (Davidson dressed up as Elvis Presley and took some ribbing from the kids who didn’t know who he was supposed to be) when hopped up on candy they’d eaten as school, the kids were unruly. Davidson later discovered many bus drivers begged off sick that day.

But in a chapter of the book that begins: “Best day on the job,” he concludes:

“I couldn’t tell you when it happened, exactly. The moment when all the noticeable differences melted away and they became kids, same as any other kids. Yes, I could see the wheelchair and yes, the facial tics and yes, the florid hand gestures. But in my eyes, those things had ceased to be a definition of selfhood. They never should have defined those kids in the first place. They were just kids – my kids, I thought possessively. The best kids in the whole damn world.”

During their conversation, Nam Kiwanuka asks Davidson what he learned from his year as a school bus driver. He says, “Basically, it turned me into an adult.” In the book, he writes:

“When people find out that I used to drive a bus for students with special needs the common response is: ‘That was noble of you.’ I don’t bother telling them that I took the job because I was poor and nobody else would hire me. Nobility had nothing to do with it. But sometimes a person can be ennobled by circumstance.”