A new study shows many people want to improve their mental health through exercise — but poor mental health is a barrier. So what’s the solution?
By Justin Chandler - Published on May 05, 2021
Jennifer Heisz is an associate professor in McMaster’s Department of Kinesiology. (Paulina Rzeczkowska)

HAMILTON — Before the pandemic hit Ontario, Jennifer Heisz had been training for a triathlon. The director of McMaster University’s NeuroFit Lab calls the training “my own personal three-year journey from sedentary to Ironman, to show the benefits of extra exercise on mental health and brain health” — both focuses of her research.

Then, in March 2020, the province went into lockdown, shuttering the gyms and pools where Heisz worked out. “There was so much uncertainty. For me, this was extremely anxiety-provoking. It was extremely stressful,” she says. “I couldn’t exercise at the same intensity I had been.”

Heisz, an associate professor in McMaster’s Department of Kinesiology, wondered whether other people felt the same way. She also worried that the pandemic might cause some to forgo exercise altogether. That inspired Heisz and her team to launch a study into exercise and mental health during the pandemic. Published in April, it identifies a troubling paradox: many respondents who said they wanted improve their mental health via exercise also identified poor mental health as a barrier to doing so.

Between April 23 and June 30, the NeuroFit team asked 1,669 study participants about their demographics, physical-activity levels, and mental health. “The first question was: How are people doing? And the answer was: they weren’t doing very well at all,” Heisz says. “We saw stress was way up and depression and anxiety were at the moderate level, which would be considered clinical.” Some 55 per cent of respondents said their mental health had gotten worse or much worse during the pandemic.

Respondents also reported being less active during the pandemic than before. “They were doing about one hour less of activity per week, and they were sitting about 30 minutes more per day,” Heisz says. “This was really impacting their mental health. We found that those who were able to maintain their activity level were doing better.”

Respondents also indicated that their reasons for exercising had changed: stress reduction, anxiety relief, and improved sleep had increasingly become motivators during the pandemic, whereas weight loss, social engagement, and appearance goals had been more popular before. Barriers to exercise changed during the pandemic, too: more people reported a lack of motivation, no access to facilities, increased anxiety, and a lack of support as holding them back.

Heisz says there’s a simple reason that people who want to exercise more to relieve anxiety or stress often can’t: “It’s hard to exercise; it’s a physical stressor on the body, and physical stressors and psychological stressors both use one stress system.” These stresses, she explains, stack on top of one another and lower your overall stress tolerance.

Abbey Morris, a St. Catharines yoga instructor, is familiar with the interplay between exercise and mental health. When she was younger, she would wake up at 5 a.m. and run 20 kilometres before going to work. “Not only was I absolutely exhausted before I even started my eight-hour shift, but if I didn’t run in the morning before I went to work, I could not function that day,” she says. “I just felt so terrible about myself, like I was lazy.” She would eventually be diagnosed with anorexia, of which compulsive exercising can be a sign.

Now, Morris teaches yoga to people recovering from eating disorders, focusing on mindfulness and mental health. She likes that the NeuroFit Lab’s study asked people why they exercise, something she doesn’t think happens enough. “A lot of people are exercising not because they enjoy it, but because they feel guilty if they don’t,” she says.

Heisz stresses the importance of “giving yourself permission to play” — focusing on moving to feel good rather than to get strong. Her team created a mental-health and exercise toolkit to help people change the way they think about exercise. It recommends scheduling workouts to relieve the stress of decision-making, lowering their intensity (Heisz says people can still obtain mental-health benefits from lower-intensity exercise), and keeping in mind that some exercise is better than none.

But the study identified another barrier to exercise: income. Respondents — especially those 18 to 29 years old — who reported having “just enough” or “less than enough” income experienced greater declines in mental health and exercise during the pandemic. The study notes that younger people, who typically work longer hours and earn less, may lack the time and space they need to exercise.

Kojo Damptey, interim director of the Hamilton Centre for Civic Inclusion, says he’s heard of those problems from community members that his organization works with. In Hamilton, he says, many people who earn low incomes live in small apartments and lack access to greenspaces. That’s why the Just Recovery coalition he’s part of has called for improved access to outdoor space, better and more accessible playgrounds, and the construction of bigger units that renters can comfortably raise children in. “If we’re able to structure roads and apartment buildings in ways that space is given to people, then they will be able to engage in physical activity that at least will help address mental health,” he says.

Morris says students who struggle with their workout space should do what they can to get comfortable: tidy up, play music, light a candle. Most important, she says, is committing to exercise, even if not for long. “If I really don’t want to do something, I always try and commit myself to at least five minutes,” she says.

By lowering the intensity of her training, Heisz was able to work through her stress and prepare for that triathlon. Though the race was cancelled, she organized her own in and around Dundas, completing it in August 2020. Heisz calls it “the hardest thing I’ve ever done” but says she was thrilled to do it. “A lot of people underestimate the benefits movement has for mental health. It’s top of the list. Especially now.”

The National Eating Disorder Information Centre provides information, resources, referrals and support to people affected by eating disorders; it can be contacted at 1-866-633-4220.

Mental Health Week
Are Ontario's Kids in Crisis?
Eastern Ontario Hub journalist Marsha McLeod and TVO.org assistant editor Ashley Okwuosa discuss their deep dive into how children and youth across the province are faring in the pandemic. 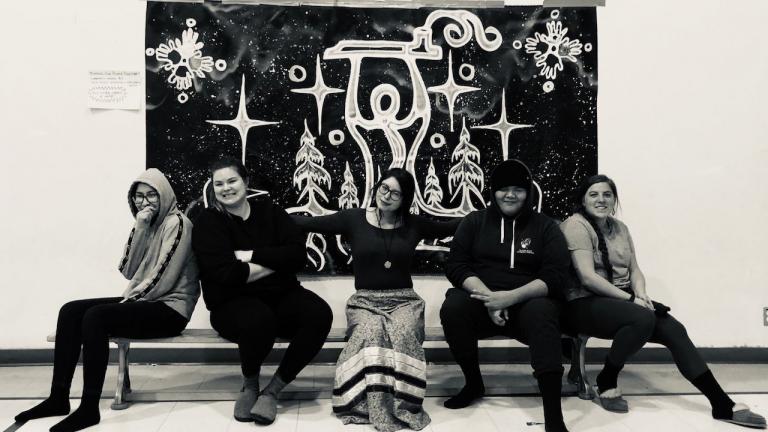