Climate Roundup: Why hydroelectricity isn’t as green as it seems

Hydroelectric generation, which accounts for roughly a quarter of electricity supplied in Ontario, is generally treated as a zero-emission source of renewable power. But a new study published in the journal Bioscience and highlighted in the Globe and Mail suggests that hydropower isn’t as climate-friendly as many believe.

The study looked at man-made reservoirs around the world that make the largest hydroelectric projects possible. Reservoirs hold massive amounts of water and ensure the flow is consistent in the dam and water pressure is always available. The creation of these reservoirs requires that massive areas of land be flooded, which causes plants and other organic matter to decompose and emit methane. Methane is 86 times more potent a greenhouse gas than carbon dioxide when measured over a 20-year horizon.

The researchers — a mix of scientists from the United States, Canada, China, Brazil and parts of Europe — conclude that such reservoirs are responsible for 1.3 per cent of human-caused greenhouse gas emissions globally. “It may well be that most, though not all, hydropower projects have a lower carbon footprint than natural gas-fired electricity plants. But they are not, as their promoters suggest, emissions-free,” wrote Globe and Mail columnist Konrad Yakabuski.

Unfortunately, the article leaves the (wrong) impression that when it comes to greenhouse gas emissions hydropower isn’t a whole lot better than natural gas-fired generation, and in some cases is just as bad. For one, the study only looked at gross emissions, meaning it didn’t take into account the amount of greenhouse gases that reservoirs can fix and store. Second, a simple back-of-napkin calculation shows that global electricity production from coal is, on average, 10 times more greenhouse gas-intensive than hydroelectric generation. Natural gas is five times more intensive. So while it may be true that hydropower isn’t emission-free, it remains substantially more climate friendly than any other fossil-fuel generation out there, including natural gas.

Are Conservatives sabotaging themselves on carbon pricing position?

Now that the dust has mostly settled on the Trudeau government’s carbon-pricing intentions, media scrutiny has turned to federal and provincial Conservatives who continue to dismiss as a “tax grab” anything remotely resembling a carbon tax. As a Globe and Mail editorial put it, “Listening to some conservative politicians attack the Trudeau government’s carbon pricing plan has been intellectually painful.” Paul Wells of the Toronto Star took shots at Conservative finance critic Lisa Raitt for exaggerating the pricing plan’s impact on families, especially since 80 per cent of Canada’s population is already covered by provincial carbon-pricing plans. Andrew Coyne of the National Post asked how could it be a tax grab if all the money collected by Ottawa would be handed back to the provinces and, potentially, returned to consumers in the form of provincial tax breaks? (For a balanced perspective of how the federal carbon-pricing plan could hit pocketbooks, check out Trevor Tombe’s analysis in Maclean’s.)

Over at iPolitics, writer Stephen Maher says Conservatives are sabotaging themselves by continuing to come across as climate change-denying Astroturfers. “Their critiques of this plan so far rest on Chicken Little scenarios that bear next to no resemblance to what is actually being proposed,” wrote Maher, referring specifically to some of the comments from Calgary MP Michelle Rempel and Saskatchewan Premier Brad Wall. “For the moment, however, the Wall-Rempel approach of aggressive rejection doesn’t seem to be getting as much traction as it might — and the Liberals ended the week thinking things had gone fairly well for them.”

The Liberal government promised to spend $60 billion on infrastructure over the next decade, with most of it to be allocated in 2018 and beyond. Just how much that new infrastructure will affect Canada’s carbon footprint isn’t clear, which is why Halifax MP Andy Fillmore wants the biggest projects to be scrutinized through a climate-friendly lens.

Fillmore was successful last week in winning support for a private member’s motion proposing that all infrastructure projects over a certain size be subject to an emissions analysis, with priority given to low-carbon proposals. The Liberals and NDP supported the motion; the Conservatives voted against it, citing more “red tape” in the name of climate change. Now that the motion has passed, Fillmore must work with Minister of Infrastructure and Communities Amarjeet Sohi and Minister of Environment and Climate Change Catherine McKenna on an appropriate project screening framework.

“This is really about accounting for carbon, about understanding how much carbon the government of Canada and therefore the people of Canada are buying when they fund infrastructure projects,” Fillmore told the Chronicle Herald. He’s aiming to have the framework ready in time for phase two of the federal government’s infrastructure spending plan.

Have Canada’s biofuels policies been cost-effective?

A new report from Canada’s Ecofiscal Commission concludes that government support for biofuels has been a costly way to reduce greenhouse gas emissions. Let’s forget the larger controversy surrounding biofuels — that they compete with food crops for land and may play a role in driving up food prices. The report argues that the cost of ethanol policy in Canada equates to having a $180 to $284 per tonne price on carbon. For biodiesel, it ranges from $128 to $596. That’s well above plans by the Trudeau government to have a $50 national “floor” on carbon by 2022. The commission is recommending that all subsidies for biofuels be killed in light of plans to price carbon across Canada. It’s also encouraging governments to create low-carbon fuel standards that put emphasis on emissions, not on specific fuels or technologies. As for next-generation biofuels that have the potential to achieve much bigger emissions reductions, they “may be a worthwhile candidate for continued R&D support,” according to the commission. Canada’s biofuels industry reacted pretty much as expected, calling the report “skewed, flawed and unacceptable.”

The Big Picture: Numbering the days for gas-fuelled cars

Electric vehicles continue to gain traction in Canada, with September shaping up to be another record month for sales, led by GM’s Chevy Volt and Tesla’s Model S. But let’s be blunt: compared to gas-fuelled vehicles the total sale of electric vehicles is still a faint blip on the national radar. 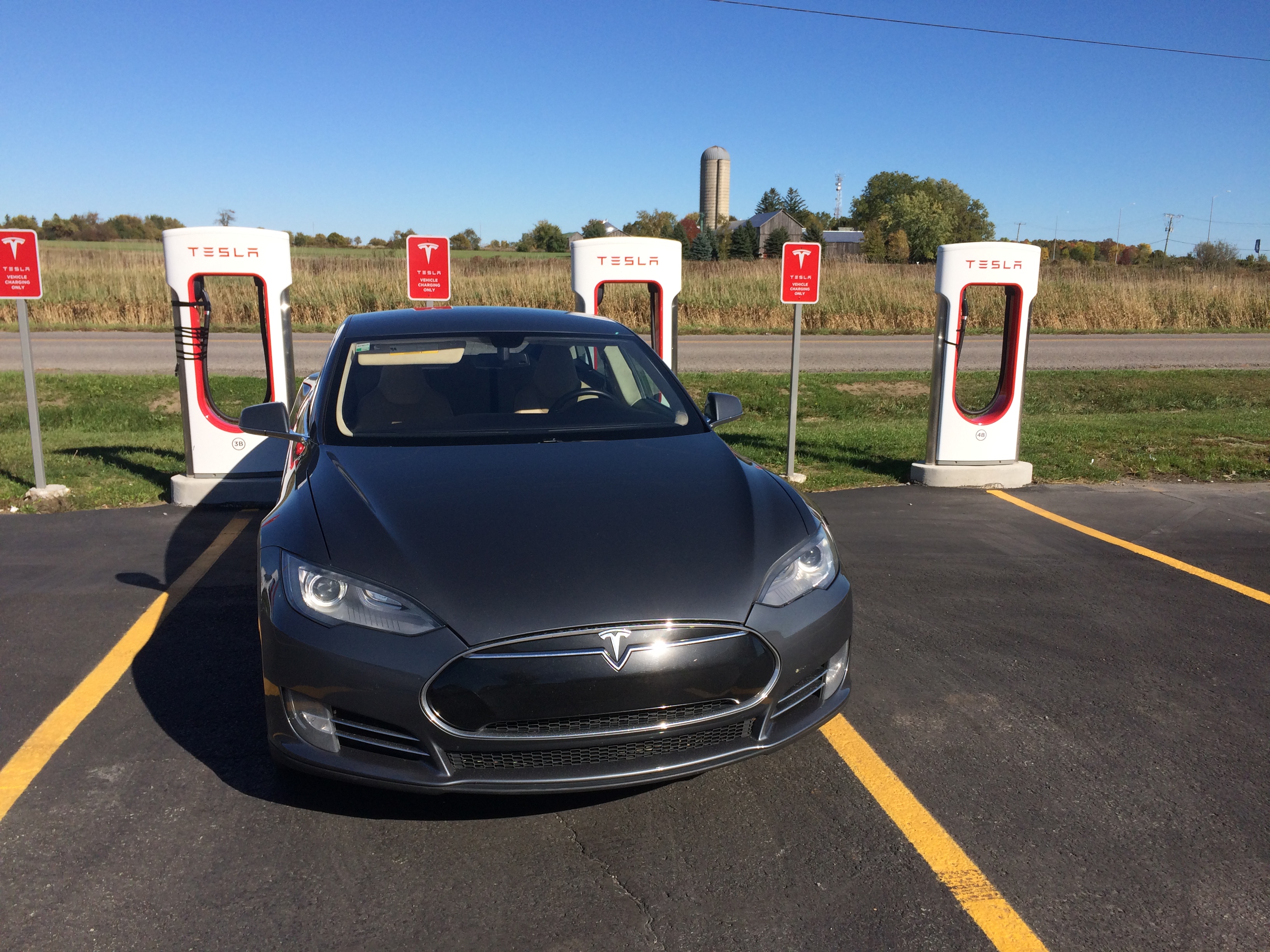 How to change that? Across the pond, one might look to Germany, where legislators in the Bundesrat passed a resolution to ban the internal combustion engine starting in 2030. The resolution has no force in law, as this is European Union turf. However, the Germans have traditionally shaped EU regulations. Indeed, they’re urging the EU to pass directives to the effect that “only zero-emission passenger vehicles will be approved” for use on EU roads by 2030.

Germany isn’t alone. Legislators in Norway and the Netherlands are pushing for a ban by 2025, and other jurisdictions are considering similar goals. There’s no sign of this happening in North America, where the transition to electric vehicles is expected to be slower. A Wood Mackenzie report estimates that electric vehicles will account for 12 per cent of new car sales in the United States by 2035, though under an optimistic scenario it figures that number could rise to 85 per cent with the right mix of incentives, policies and technological breakthroughs. Ontario’s Climate Change Action Plan, meanwhile, aims to have at least 1.7 million electric and hybrid cars in use by 2024 and get seven million gas-powered vehicles off the road by 2030.

Hurricane Matthew wasn’t the worst storm to hit the East Coast, but it left behind a trail of devastation stretching from Florida to Newfoundland. It has killed more than two-dozen people across Florida, South Carolina, Georgia and North Carolina, where power outages and flooding continue to affect millions. Canada wasn’t spared. Remnants of the storm hit the Maritimes hard, with intense rainfall and flooding that had some communities declaring a state of emergency.

U.S. presidential hopeful Hillary Clinton, during a campaign stop in Miami, said Hurricane Matthew was likely made more menacing because of climate change — that is, near-record high ocean temperatures literally fuelled the tropical storm and sea level rise allowed for more destructive storm surges. The science linking specific hurricanes to climate change is weak compared to, for example, the link to heat waves. That said, evidence continues to build at a high level that warming temperatures are increasing the frequency of the biggest, meanest storms.

A study this week out of Princeton and Rutgers universities supports this conclusion. Focusing specifically on the impacts to New York City, the researchers found that hurricanes with the destructiveness and intensity of 2012’s Hurricane Sandy could start flooding New York City’s coastline every 20 years, compared to what was thought to be every 400 years.

The reason has mostly to do with more powerful storm surges, exacerbated by rising sea levels. Their study estimated that surges of about three metres could occur three to 17 times more often than today between now and 2100. “The inundations from hurricanes will affect where we live, it will affect how we work, it will cause problems with the ecosystem,” study co-author Benjamin Horton, a professor of sea level research at Rutgers, told Reuters. “It’s very bleak.”

Tyler Hamilton is a climate writer and adjunct professor of eco-studies at York University.