Climate Roundup: Why climate change is a threat to global health

By Tyler Hamilton - Published on Aug 24, 2016
Dr. James Orbinski delivers a keynote address to the CMA on the health effects of climate change on Aug. 22. (Darryl Dyck/Canadian Press)

One of the founders of Doctors Without Borders has a clear and direct message for Canadian doctors: Step up, step out, and be genuinely courageous when it comes to tackling the climate challenge.

Dr. James Orbinski, speaking Monday at the Canadian Medical Association’s annual national meeting, described climate change as the “greatest global health threat of the 21st century.” Within Canada, temperatures are increasing at twice the rate of the global average and sea-level rise is threatening cities like Vancouver, said Orbinski, who is also research chair in global health at the Balsillie School of International Affairs in Waterloo.

Canadian doctors, he added, need to prepare themselves for the expected health impacts. These range from heat exhaustion and the spread of disease to injuries from extreme weather and the long-term impacts on mental health. Prior to the meeting, Dr. Danyaal Raza, a professor at the University of Toronto and physician at St. Michael’s Hospital, explained in a commentary how Toronto can expect to be affected.

The good news is that Ontario has clear evidence of how climate action can improve public health. When days get warmer we use more air conditioning, and that leads to increased demand for electricity. Back in 2005, that meant burning more coal during the hottest days of the year. In that year we had 53 smog days in Toronto, and as we know, regular exposure to particulates and other pollutants that cause smog contribute to lung and heart damage and aggravate conditions like asthma. Since then, Ontario has shut down all coal-fired generation, which helps explain why there were no smog days in 2014 and 2015 and only one smog day this summer, despite the August heat wave. At the same time, this reduction in the use of “dirty” power has significantly lowered heat-trapping greenhouse gas emissions in the province.

Ontario gets transit-spending boost from feds

Transportation is the single largest source of greenhouse gas emissions in Ontario, so getting more cars and trucks off the road and more people on transit is an important part of the province’s climate plan. That plan got a big boost Tuesday with the federal government announcing $1.49 billion in transit funding for projects in Ontario, with a lion’s share going to Toronto and Ottawa for subway work and light rail transit. “In communities across the province this investment will shorten commute times and make public transit more efficient and more inclusive,” Prime Minister Justin Trudeau said at an event in Barrie. Premier Kathleen Wynne, meanwhile, said another round of federal transit funding is being negotiated.

Getting more electric cars on the road is another part of Ontario’s climate plan, and, as previously reported, one of the big barriers to achieving that goal is the difficulty of shopping for electric vehicles through the traditional auto dealership network. That’s a problem Mike Elwood is looking to solve. The co-founder of electric vehicle advocacy organization Electric Mobility Canada just launched an Ottawa-based venture called EVEN Electric that is taking a different approach to selling new and used battery-powered vehicles.

Interested buyers will be able to learn about and shop for electric vehicles from a number of competing brands through its website. Once an order has been placed, the vehicle is delivered from a central facility to a local customer centre that offers test drives. EVEN describes this model as “a streamlined and less capital intensive version” of a conventional dealership. Elwood explained: “Our EVEN model was developed to combine the best aspects of both an on-line and in-store retail experience to make it easy for EV customers to find and acquire exactly what they want, when and where they want it.” The company plans to have a global presence, starting with Iceland and Panama and spreading to parts of Canada, the United States and Europe.

There was a time when British Columbia could claim to be Canada’s climate leader. This was between 2007 and 2011, when premier Gordon Campbell banned electricity generation from coal and natural gas and implemented a widely praised carbon tax that started at $10 per tonne of emissions and rose to $30, where it sits today. The tax is revenue-neutral, meaning money collected goes back to citizens in the form of corporate and income tax cuts. As was hoped, it led to a reduction in fuel use in the province without hurting the economy.

But that was then. Last week, Premier Christy Clark introduced B.C.’s new climate plan, and environmental groups are slamming it. It doesn’t attempt to increase B.C.’s carbon tax, which has sat frozen since 2012 and needs to rise over time to remain effective. It doesn’t set emissions targets for 2030. Instead, it outlines new regulations and subsidies that some economists consider costly and ineffective, and ignores most of the recommendations of the government’s own climate advisory panel. The fact the plan was released on a Friday afternoon in August speaks volumes.

Mark Jaccard, a professor of resource and environmental management at Simon Fraser University, called the new plan “cynically ineffective.” But B.C. Environment Minister Mary Polak called it “a first step” and said measures can be tightened later after consultation with the federal government and other provinces and the release of a national plan.

Towns learn climate lessons from one other

The New York Times had an interesting piece this week on how small villages and towns are tackling climate change. Specifically, how the private citizens of these places — not local governments — are banding together to take action on their own. One community cited is Eden Mills, Ont., whose citizens were inspired after resident Charles Simon traveled to the British town of Ashton Hayes to learn how it’s done. “Some of the changes are so easy,” Simon told the NYT. “Just put on a sweater instead of turning on the heat.” As a result of Simon’s learning expedition to the U.K., Eden Mills citizens have collectively cut town emissions by 14 per cent — and more reductions are expected to come.

Sharing knowledge at the local level is on the rise as communities struggle with climate adaptation and the wonky weather that a warming climate brings. Thunder Bay councillor Andrew Foulds, for example, wants his city to share its 2012 experiences with extreme flooding with Dryden, another northern Ontario community hit by floods this month. “I really believe northerners should stick together,” Foulds told the the Chronicle Journal.

The Big Picture: Climate change to come at a huge cost to millennials

How will different generations be affected by climate change? U.S. organization NextGen Climate recently attempted to answer that question as it applies to millennials, a demographic cohort that broadly includes anyone born during the 1980s and most of the ‘90s — that is, people who are between 19 and 35 years old today.

In a report released this week, NextGen calculated that without action on climate change, millennials can collectively expect to lose nearly US$8.8 trillion in lifetime income. For example, a 21-year-old entering the workforce last year and earning a median U.S. income will lose $126,000 over their lifetime, while a person born in 2015 will lose an estimated $467,000. The conclusion: the longer we wait to tackle climate change, the more it will affect the income and wealth of future generations.

“The economic losses caused by climate change are substantially greater than the damages of other economic challenges,” according to the report. “Young people today are uniquely exposed to the risks, costs, and devastation.” The main findings of the report are based on a non-partisan study by researchers at Stanford University and the University of California, Berkeley. While it focuses on millennials south of the border, it offers insight for Canadian youth and decision makers.

We’ve heard much recently about our melting Arctic ice, so let’s shift attention to the South Pole and some disturbing observations there. Another ice shelf in Antarctica, called Larsen C, appears increasingly unstable with a major crack in the shelf growing at an accelerating rate. Between 2011 and 2015, the length of the crack grew by 30 kilometres, but over the past five months alone it has extended another 22 kilometres. Even worse, it has widened from 200 to 350 metres. In total, the rift is now 130 kilometres long and scientists are beginning to worry about what happens next. “What this means is that it may be only a matter of time before we see the loss of an enormous chunk of Larsen C,” wrote Washington Post reporter Chris Mooney.

How enormous? Larsen C is the fourth-largest ice shelf in Antarctica and has a slightly smaller area than Scotland. The chunk that could be lost is nearly the size of Delaware. What happens if it crumbles? Well, because it’s ocean ice and not ice on the land, it won’t add water volume to the ocean and thus won’t cause a rise in sea levels. However, scientists worry that as Larsen C disappears it will speed up how quickly land-based glaciers behind it move into the ocean. That’s when sea-level impacts become a concern. “Researchers have estimated that the loss of all the ice that the Larsen C ice shelf currently holds back would raise global sea levels by 10 centimeters, or just under 4 inches,” Mooney wrote. 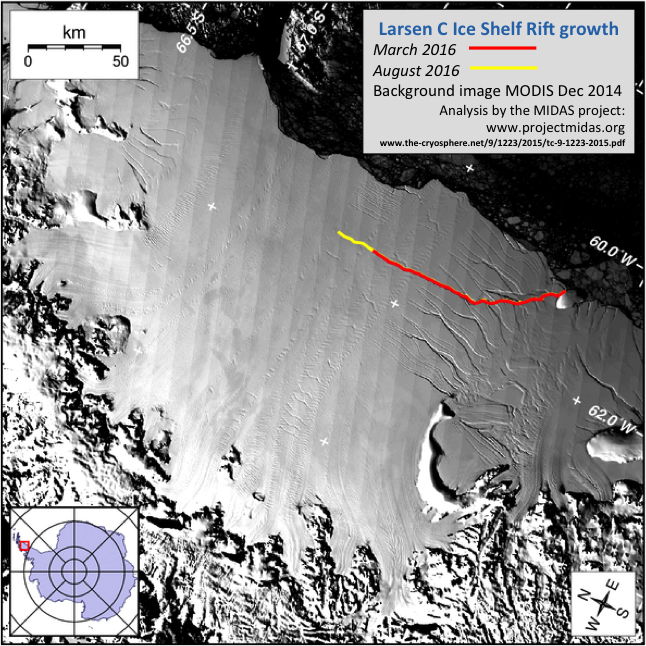