By Tyler Hamilton - Published on Aug 10, 2016
Fire bans remain in effect throughout Ontario due to lack of precipitation and some areas have imposed water use restrictions. (iStock/Marccophoto)

August is proving relentlessly hot for southern Ontario and many parts of the north. Weather warnings from Environment and Climate Change Canada say the heat is expected to last until at least Friday.

Cities and towns along the length of Highway 401 and as far north as Burk’s Falls and Pembroke will experience daytime highs in the mid-30s and overnight lows above 20C. It will be the “longest and most significant heat wave of the summer so far,” according to a statement from the environment department. Meteorologists call it a heat dome effect, but to be fair, Ontario has experienced these stretches of warm temperatures before.

Perhaps a bigger related issue is the lack of precipitation. Fire bans remain in effect throughout the province and some areas have imposed water use restrictions. Mike Whittamore, farmer and owner of Whittamore's Farm in Markham, told CBC News he’s expecting a good growing year but only because he’s been irrigating his crops 12 to 14 hours a day. He’s worried what the lack of rain will mean for next year.

About 200 kilometres east in Prince Edward County, the situation is far worse. Water ratings are at Level 3, which means water supply doesn’t meet demand without strict management and conservation measures. The Toronto area, by comparison, is at Level 1. “It's a very stressful situation,” Don McCabe, president of the Ontario Federation of Agriculture, told CBC News. “We are hoping like hell that it's going to rain.”

We’ll have a better sense of how this summer ranks when final data is released this fall.

The provincial government is defending the Ontario Energy Board’s decision last week to bury the province’s soon-to-arrive carbon charge in the “delivery” line on natural gas bills, despite the fact that gas customers seem to want such transparency. Energy board staff argued the new line item “could increase customer confusion and utility call centre activity.”

Opposition parties and critics say it’s a blatant attempt to hide the new climate charge so the government can dodge future criticism of it. They point to the fact that the Liberals, under Dalton McGuinty, were more than happy to create a separate line on hydro bills for the Ontario Clean Energy Benefit, which gave electricity users a 10 per cent discount on their monthly bills. NDP Leader Andrea Horwath, quoted in the Toronto Star, accused the Liberals of engaging in selective disclosure to serve their own interests.

Much of the world was watching last Friday’s opening ceremony of the Rio Olympics, so what better time to put full attention on the global problem of climate change? It was fitting that it happened in Brazil, where destruction of the rainforest as a result of deforestation has helped amplify the greenhouse gas effect. To hit home the message, a video narrated by British actor Judi Dench displayed maps, graphics and images to highlight evidence of the problem and the challenges humanity is expected to face over the coming decades. “This was not the stuff of celebration and joy, of gold medals and national pride, but rather a stark message about the challenges facing the planet and an unsubtle reminder that the countries of the world are inexorably linked in their fates,” wrote the Washington Post. As climate journalist and activist Bill McKibben responded on Twitter, “Americans watching the climate change segment of #Rio2016 ceremony are reminded that in most of the world this is not controversial.”

Climate resilience a big part of $1.35B Whistler acquisition

Ski resorts worldwide have suffered as a result of climate change. Lower-than-average snowfall, fewer days of below-freezing temperatures and unpredictable weather have made it difficult for some resorts in some areas to survive. That’s a problem for a winter sports industry that in the United States alone is responsible for more than US$12 billion  in economic activity. Which is why the proposed acquisition this week of B.C.’s Whistler Blackcomb resort is so interesting. Colorado-based Vail Resorts is acquiring Whistler, arguably the largest and busiest ski area in North America, partly because of the investments it has made to become more resilient on the face of climate change. At least that’s how Whistler CEO Dave Brownlie sees it. It is on Brownlie’s watch that Whistler launched its “Renaissance” project, which is focused on developing year-round, weather-independent amenities — think indoor sports centres and water parks — that help reduce the resort’s reliance on ski-friendly conditions. At $345 million, it’s the largest investment plan in the resort’s half-century history.

Last week we reported how higher-than-average temperatures in Siberia are being blamed for the release of previously frozen anthrax spores from the permafrost. The outbreak has sent more than 70 people to the hospital and led to at least one death. Now, there’s talk of how melting ice and permafrost in the north could expose long-ago abandoned — and potentially dangerous — military infrastructure and materials. It might all sound like a storyline for an episode of The X-Files, but this is serious stuff. A just-released multi-country study involving Toronto’s York University focuses specifically on Greenland, where a secret U.S. military base  called Camp Century, was built under the ice sheet in 1959. It was on this base that U.S. military engineers studied the feasibility of deploying ballistic missiles within the ice sheet. “The base and its wastes were abandoned with minimal decommissioning in 1967, under the assumption they would be preserved for eternity by perpetually accumulating snowfall,” the researchers report. Climate change, however, is destroying the validity of that assumption. The study estimates that continued atmospheric warming over the next 75 years will “guarantee the eventual remobilization of physical, chemical, biological and radiological wastes abandoned at the site.” Could alien spacecraft be next? Mulder!

The planet has a limited amount of natural resources. Sustainably using these resources — that is, keeping supply and demand in balance over the long term — means consuming only as much as nature can regenerate or process in a given year. If humanity continues to run a resources deficit year to year, decade to decade — as it has since the early 1970s — we’ll eventually find ourselves in serious trouble, whether we’re talking about food and water shortages or unmanageable levels of greenhouse gas emissions in the atmosphere.

A think tank called the Global Footprint Network keeps track of how we’re doing, and every year it seems the results are getting worse. To illustrate the problem, the organization shines a light on what it calls Earth Overshoot Day, which is a point in the calendar year when humanity has used up its entire natural resources budget for that year. Overshoot day continues to occur earlier in the year. This year it landed on Aug. 8, compared to late September back in 2000. The good in the bad news is that we’re getting closer to reversing the global trend. The bad in the good news is that Canada, with its abundant resources and relatively small population, remains well within its budget but has been steadily closing the gap. Fast Company has a good overview of the report.

Establishing a unified Canadian position on climate change is tricky, mostly because we know that opinions across the country can vary, sometimes widely. Strangely, it took a U.S.-led study to give us more insight into those differences. Researchers from the University of California, Utah State University and Yale University, with assistance from the U.K.’s University of Essex and Université de Montréal, recently published a detailed breakdown of Canadians’ opinions as they relate to climate science and support for carbon pricing. What they concluded is that Canadian urbanites believe more strongly that climate change is caused by human activity, though at a provincial level those in Alberta, Saskatchewan and northeastern B.C. are most doubtful. They also found that the majority of people in every province and district support the idea of carbon cap-and-trade programs, but differences of opinion are more pronounced when it comes to talk of carbon taxes. Indeed, only B.C. and Manitoba show a slim majority support for carbon taxes.

Compared to Americans, “Canadians believe climate change is happening at higher levels,” the researchers write. We always suspected as much, but it’s helpful to have the data to back it up. This study will be useful as the federal government moves toward the idea of putting a minimum national price on carbon. That cap-and-trade seems to be more popular with more Canadians is something the federal government will have to keep in mind as it designs its carbon-pricing policy. 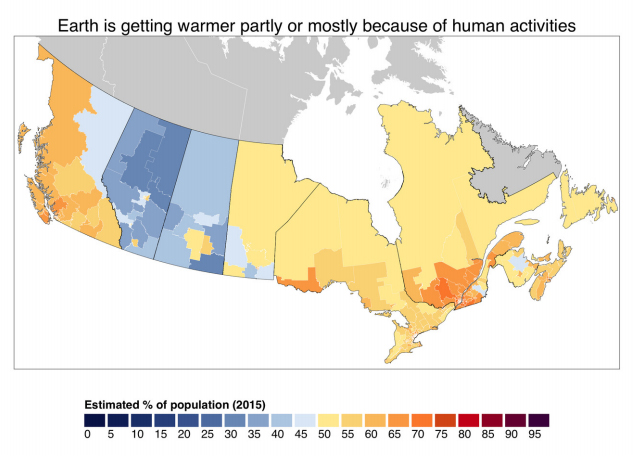