Climate Roundup: Is the hydro rebate a Band-Aid or a long-term solution?

But the headline-grabbing news was her government’s decision to provide relief for electricity consumers who increasingly have complained of sky-high bills: “Whether in Kenora, Sudbury, Belleville, London or Barrie, your government has listened to and has heard your concerns. It recognizes that the cost of electricity is now stretching family budgets.”

Relief is coming, the speech announced, in the form of an on-bill rebate. Beginning January 1, 2017 the provincial portion of the HST will be scrapped, amounting to savings of eight per cent for residential and small business customers. Rural customers, meanwhile, could see their bills fall by 20 per cent if they are eligible for additional support.

Similar to the 10 per cent rebate offered through the now-scrapped Clean Energy Benefit, the HST rebate simply means taxpayers will be subsidizing electricity ratepayers. Taxpayers will also pick up the tab for additional rebates given to rural customers. Opposition PC Leader Patrick Brown said it’s “too little, too late” and doesn’t address what’s causing hydro rates to soar. Toronto Star columnist Martin Regg Cohn echoed that thought, calling it “a quick and dirty fix, not an enduring solution.” The Canadian Taxpayers Federation accused Wynne of trying to bribe people with their own money.

A threat to energy conservation?

Also related to Wynne’s tough climate talk: will the new rebates, expected to cost $1 billion, undermine emissions reduction efforts by reducing the incentive to conserve and invest in energy efficiency? Better to put that money into conservation programs, argues Julia Langer, chief executive of the Toronto Atmospheric Fund. “Increasing investment in conservation for all customers, rather than generic rebates, is the most efficient and cost-effective way to mitigate rising electricity bills, in part caused by climate change.”

One place to start is the more than 10 per cent of mostly rural households in Ontario that still use electric baseboard heating and are getting hit hardest by rising hydro rates. For these households, better home insulation combined with switching to heat pump systems could slash winter heating costs by more than half. The Ontario Environmental Commissioner reported in May that conservation efforts to date have cost ratepayers only 2.9 cents per kilowatt-hour, versus eight to 29 cents for natural gas and 13 cents for wind. “Conservation remains the cheapest form of energy,” it concluded.

Electricity rates might be the current lightning rod for the Wynne government, but when it comes to reducing greenhouse gas emissions, how we plan and build communities is just as important. Ontario’s 10-year-old Smart Growth Plan is currently under review, and a new report from the Ryerson City Building Institute and the Ontario Home Builders’ Association wants to make sure the province sticks with its policy of boosting the density of existing and newly planned neighbourhoods. Their fear is the high cost of housing will pressure the government to open up new land for development, making suburban sprawl even worse and putting more emission-spewing vehicles on GTA roads.

Cherise Burda, executive director of the institute, told the Toronto Star the best compromise is to build more affordable mid-rise homes and townhouses closer to the city and to transit nodes — what the report called the “missing middle” of a Toronto housing market flooded with high-rise condos. Building more detached homes on the transit-starved outskirts of the GTA isn’t the answer, she said. “Most people want a detached home but if they’re given a choice between living in a detached home two hours away or living in a midrise or a townhouse that is connected and it’s half an hour from the city, the work we have done has shown people prefer the latter.”

Many environmentalists were unhappy that the aviation sector was left out of the Paris Agreement. Instead, the 191-member International Civil Aviation Organization (ICAO) was left to chart the industry’s emissions course. In recent years there’s been a lot of foot-dragging by the ICAO, but Canada, which will play host to the organization’s annual assembly in Montreal on September 27, is reportedly working behind the scenes to broker a global greenhouse gas-reduction pact.

Key to that pact would be a carbon-credit system allowing airlines to purchase non-aviation offsets, allowing the sector to achieve carbon-neutral growth by 2020. It may not be perfect, but some environmentalists say it’s a good start for an industry expected to create up to five per cent of global greenhouse gas emissions if left unchecked (compared to two per cent today). But a deal remains far from certain. Airlines in developing countries want special exemptions, which members like European Union nations oppose. Federal Transport Minister Marc Garneau said reaching a consensus won’t be easy but is essential. “We need everyone to be on board,” he told CBC News.

A contagious bacterial disease spreading across apple orchards in Quebec is being blamed on hotter and more humid weather. Between 80 and 100 orchards out of the 130 in the Laurentians have been affected by fire blight, according to a report from the Canadian Press, and farmers are worried it will continue to spread in coming years. If left unchecked, the disease can kill trees. Eric Rochon, who leads a group that represents the Quebec apple industry, went so far as to call the outbreak a “state of emergency.” One affected farmer, Marc Vincent, singled out climate change as a cause because of unusually hot and humid conditions. “Ten years ago it was a lot less common,” he said.

Last month was the “warmest August in 136 years of modern record-keeping,” according to a new analysis from NASA’s Goddard Institute for Space Studies. The world has experienced 11 consecutive record-hot months in a row. And as a new study from the University of British Columbia shows, the rising thermometer and its effect on ocean conditions could slash $10 billion, or 10 per cent, from annual global fisheries revenues over the next three decades. “Developing countries most dependent on fisheries for food and revenue will be hardest hit,” said Vicky Lam, the study’s lead author. Island countries, such as Tuvalu and the Cayman Islands, will be the most affected. At the same time, northern fishing countries such as Iceland are expected to benefit as fish species migrate. Lam said it will be increasingly important for vulnerable countries to invest in adaptation programs that, for example, help make local species more resilient. That adaptation will be needed whether or not greenhouse gas emissions are reined in: The study  found that global fisheries revenue would still see a seven per cent drop, even if countries were to unite to keep planetary warming to under 2 C. 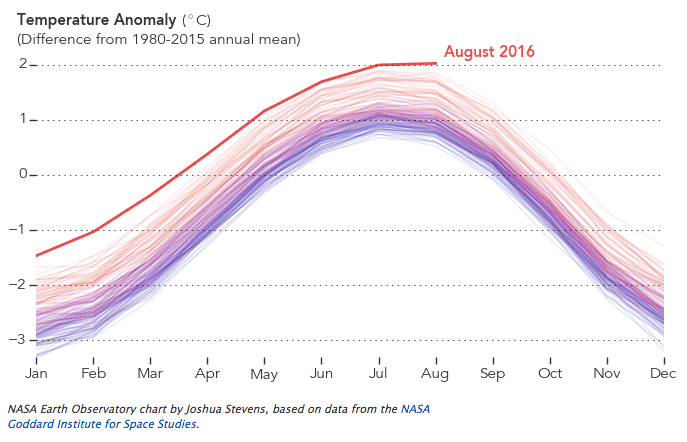 Wheat is Canada’s largest and most important crop, so when a study concludes that climate change is going to be really bad news for the wheat industry, it’s worth paying attention. That’s pretty much what researchers from Canada, the United States, Europe and China found in a new study published this past week in Nature Climate Change. Their conclusion: a 1C increase in average global temperature will result in a 4.1 to 6.4 per cent decline in global wheat yields. “The world currently produces more than 700 million tons of wheat annually,” writes Washington Post reporter Chelsea Harvey. “A reduction of just five per cent would translate to a loss of about 35 million tons each year.” That’s not good as far as the global food supply goes, especially when set against a growing world population. Yet there may be a silver lining for Canada, at least compared to some other countries. “In general,” writes Harvey, “the results suggest that warmer regions of the world will experience the greatest temperature-related losses.” Still, not exactly a reason to crack open the champagne.