Climate Roundup: How waste carbon can become a valuable resource

By Tyler Hamilton - Published on Aug 03, 2016
Melting permafrost is causing deep cracks in the critical supply highway route that connects Dawson Creek in B.C. to Delta Junction in Alaska. (iStock/Generistock)

It’s been nearly a year since Canada’s Oil Sands Innovation Alliance (COSIA) teamed up with NRG Energy in the U.S. to launch the Carbon XPrize, a $20-million competition to find the most economical ways convert carbon dioxide into high-value products.

The XPrize announced last week that 47 teams from seven countries have officially entered the race, and, impressively, Canada accounts for a quarter of them. Most come from Ontario and Alberta, which have four teams each, followed by Quebec with two teams and B.C. and Nova Scotia with one each. Dan Wicklum, chief executive of COSIA, predicted that “good things are going to happen” as a result of the competition.

The idea is to change carbon dioxide from a liability into a valuable resource. After all, why take on the hassle, expense and long-term risk of capturing carbon dioxide and pumping it into the ground when that same gas can be used to make fuels, plastics, concrete, fertilizers, foods and a range of other products that society needs?

One Toronto-based company, Pond Technologies, is using carbon dioxide to grow algae that can be turned into fuels and chemicals, while a team of researchers at the University of Toronto, led by engineering professor Ted Sargent, has developed a metal catalyst that converts carbon dioxide into renewable fuels. The province has earmarked $2.5 million to support these and two other Ontario teams.

Winners won’t be declared overnight. The competition will unfold over four years and only 10 teams will make it to the third and final round. We should know by March 2020 if an Ontario team ends up taking home the top prize.

Alberta carbon tax on track to be country’s most stringent: report

Turning carbon dioxide into useful products is one of many approaches to battling climate change, but many of these approaches are unlikely to be economical if we don’t put a meaningful price on the carbon pollution we create. That’s why many Canadian provinces are already pricing carbon. British Columbia and Alberta have a carbon tax, while Ontario and Quebec price carbon through cap-and-trade programs.

The Ecofiscal Commission, an independent alliance of Canadian economists, recently compared the carbon-pricing approaches of each province. Somewhat surprisingly, it concluded that by 2020 Alberta is expected to have the most stringent pricing program in the country. That’s right, oil country is starting to kick carbon butt. The reason is simple: While B.C. might have the highest tax, Alberta’s tax will cover more of its economy. “For B.C. to get back in the lead, they either have to increase the price or increase the coverage,” Ecofiscal chairman Chris Ragan told the Globe and Mail. It should be pointed out that Ontario’s cap-and-trade program, while less stringent, is meant to complement the use of subsidies and regulations, such as the decision to phase out coal-fired power generation or create electric vehicle purchase incentives.

By opposing carbon pricing, are Conservatives undermining their credibility?

On the issue of carbon pricing, Stephen Gordon, professor of economics at Laval University, has something to say. In a commentary published this week in the National Post, Gordon said federal and provincial Conservatives who continue to actively oppose the idea of a carbon price are “dismantling” their long-held credibility in the area of economics. He didn’t name names, but one could guess that folks like Saskatchewan Premier Brad Wall and Calgary MP Jason Kenney — two outspoken critics of carbon pricing — were on his mind when he wrote the article. “The foolishness of the Conservative rhetoric is difficult to overstate,” wrote Gordon. “As the Conservatives should really know by now, market-based approaches to reducing greenhouse gas emissions are more efficient than regulations. It’s better to let households and firms make their own priorities in response to price signals instead of having them imposed by the government.” Gordon suggested many reasons for this rhetoric, including the possibilities that some Conservatives still think climate change is a hoax. “But whatever the reason — misplaced nostalgia or sheer spite — Conservatives are frittering away the remnants of their intellectual capital in economics,” Gordon concluded. Ouch!

Melting permafrost is playing havoc with the 2,232-kilometre stretch of highway that connects Dawson Creek in B.C. to Delta Junction in Alaska. The Alaska Highway has been in operation for seven decades and is a critical supply route to the north. Unfortunately, climate change has been affecting its reliability. “Bumps and cracks have scarred huge swaths of the road, with some fissures so deep a grown man can jump in and walk through them,” according to an in-depth report from Bloomberg. “Scientists say they’re the crystal-clear manifestation that permafrost — slabs of ice and sediment just beneath the Earth’s surface in colder climes — is thawing as global temperatures keep rising,” the article says. Catherine McKenna, Canada’s minister of environment and climate change, said the thawing of the permafrost is more than just an inconvenience; it’s making it increasingly difficult to ship goods into and out of communities. “It’s a change in the way of life,” she said.

The risks associated with thawing permafrost aren’t confined to highways, as we’ve seen this week in Siberia. The latest reports say dozens may have been infected with the deadly anthrax virus, which some experts believe was released from the Siberian permafrost as a result of record-high temperatures in the region.

There is speculation that the anthrax sat dormant within a frozen reindeer or human corpse trapped within the permafrost. Once thawed, it seems local reindeer became contaminated with anthrax spores. More than 2,300 reindeer have reportedly died, and because the local population eats reindeer meat, the infection has spread to humans. A report in The Guardian says the anthrax outbreak may have sickened scores of nomadic herders, including 41 children. A 12-year-old boy is believed to be the first person killed by the infection.

Higher-than-average temperatures in northern Russia are believed to be the main cause. “Average temperatures in Russia have increased by 0.43C in the past 10 years, but the rise has been more pronounced in areas of the far north,” the news site explained. “The warmer climate has begun thawing the permafrost soil that covers much of Russia, including cemeteries and animal burial grounds.” The last anthrax outbreak in northern Russia occurred 75 years ago.

If you want a truly big picture of how climate change affected 2015, look no further than the U.S. National Oceanic and Atmospheric Administration’s just-released State of the Climate report. If you don’t want to ruin your day, then maybe it’s best you move along to something else.

The report confirms that 2015 was the hottest year on record globally, and that most indicators of climate change reflect trends that are consistent with what you’d expect from a warming planet. “Several markers, such as land and ocean temperatures, sea levels and greenhouse gases broke records set just one year prior,” according to a statement from NOAA, which says the report is based on contributions from more than 450 scientists from 62 countries. It also reflects “tens of thousands of measurements from multiple independent datasets.”

According to the report, average global carbon dioxide concentrations in the atmosphere surpassed 400 parts per million for the first time since record-keeping began 58 years ago. Across land surfaces, “record to near-record warmth was reported across every inhabited continent.” Average sea-surface temperature hit a record high, as did the temperature of the upper-ocean layer. As for sea level, it also hit a record high of 70 mm above the 1993 average. The report says sea level has increased at an average rate of 3.3 mm a year over the past two decades, though levels have risen higher in the western Pacific and Indian Oceans, where many low-lying islands are facing an existential crisis.

It all makes for some pretty frightening reading. National Geographic has a summary if you dare dig a little deeper. 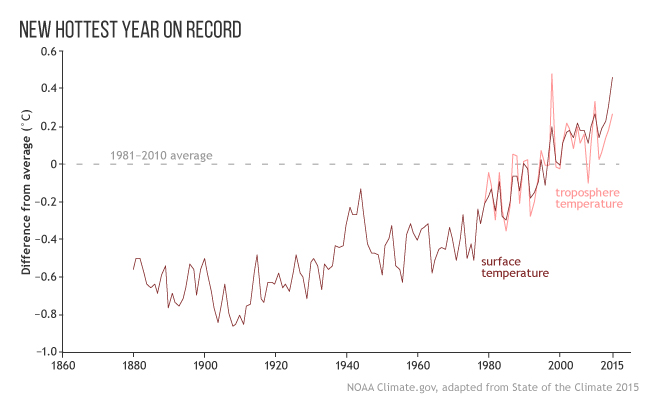 Plenty of studies show how certain tree and plant species are moving northward as the climate warms, but new research out of the University of British Columbia explains how some species may have an evolutionary edge over others.

Jennifer Williams, an assistant geography professor at UBC, led a team that experimented with two controlled populations of the invasive Arabidopsis thaliana, a small flowering plant commonly used in such experiments. In one population, genetic traits responsible for evolution were halted, while evolutionary traits in the other population were left active. Researchers observed that after six generations of plant growth under ideal conditions, the population that could evolve was able to disperse its seeds 11 per cent farther than the non-evolving population. More interesting is what happened under challenging conditions: the evolving population was able to spread 200 per cent farther.

The results, recently published in the journal Science, show how evolution can significantly accelerate the speed of plant migration in a warming world. “What our results suggest is that, with evolution, the species can move faster and faster because the traits that make them better at moving are becoming more common at the front of the invasion,”  Williams said in a UBC news report.