Canada’s energy-intensive mining industry may not enthusiastically dig a price on carbon, but it appears ready to follow the drill.

That position pretty much sums up the views of the Mining Association of Canada, which revealed Wednesday that Canada’s big mining companies — including some major oil sands developers — back the Trudeau government’s plan to slap a national minimum price on carbon pollution. Their endorsement, however, comes with a caveat: it must be broadly applied to all sectors of Canada’s economy. Fair’s fair, after all.

According to the Globe and Mail’s Shawn McCarthy, the association won’t say whether it prefers a carbon tax, like the one in British Columbia, or a cap-and-trade program, like the one in Quebec and soon to be operational in Ontario.

The industry has major clout. It employs about 380,000 workers, contributes more than $50 billion a year to the Canadian economy, and punches above its weight in the international marketplace with Toronto the undisputed global hub of mining finance. Seriously, well more than half of the world’s publicly listed mining companies are on the Toronto Stock Exchange or TSX Venture Exchange.

Ontario is Canada’s biggest mining jurisdiction. It produces more gold, nickel, copper and platinum than any other province, and could grow even larger if development ever begins on the massive Ring of Fire mineral deposit about 500 kilometres northeast of Thunder Bay. But that’s another story.

Perhaps mining association members see a carbon price as less of a burden than an opportunity, especially if monies collected are recycled back into industry emission-reduction initiatives. After all, reducing emissions means reducing energy use, and that means reducing costs.

Coal miners, on the other hand…

When it comes to mining, however, the future of the coal industry doesn’t look bright — carbon price or not. Peabody Energy, the largest coal company in the United States, announced Wednesday it was declaring bankruptcy because of an “unprecedented industry downturn.” The low cost of natural gas, driven by the shale gas boom, is a big part of the problem, but so too is a push by jurisdictions worldwide — Ontario among them — to reduce or eliminate their dependence on coal as part of long-term climate strategies. Climate activist group 350.org says Peabody is the 50th coal company to declare bankruptcy since 2012. “Peabody Energy’s bankruptcy is a harbinger of the end of the fossil fuel era,” said Jenny Marienau of 350.org. “Peabody is crashing because the company was unwilling to change with the times — they doubled down on the dirtiest of all fossil fuels, and investors backed their bet, as the world shifted toward renewable energy.” And Canadian coal companies are not immune.

Forests in B.C. that were devastated by the mountain pine beetle are bouncing back, and scientists say climate change is partly responsible. It’s ironic, considering warming temperatures due to climate change are what allowed the pesky beetle to migrate north and survive B.C. winters. Infected trees die and rot, turning what used to be a “carbon sink” into a carbon source — meaning they release more greenhouse gasses than they absorb. But warmer temperatures and the additional carbon dioxide in the atmosphere are helping boost new growth. Scientists think the forests — about five times the size of Vancouver Island — could become a carbon sink again by 2020. “This turn-around will happen much sooner than we imagined,” said Vivek Arora, a climate modeler with Canada’s environment and climate change department. Let’s hope the same effect is observed with Ontario’s sugar maples, which have their own threat in the form of the Asian long-horned beetle.

A document co-authored by activist Naomi Klein and her filmmaking husband Avi Lewis has created quite a storm this past week. Called the Leap Manifesto, it lays out a high-level plan for dealing with climate change and creating a much more sustainable Canadian economy and society. As the Toronto Star’s Thomas Walkom wrote Wednesday, this so-called “radical” document “is not particularly new.” It calls for investment in clean technologies, projects and climate-friendly infrastructure, and demands a meaningful price on carbon. It calls for a halt in all new oil and gas pipeline projects, which many say is necessary if Canada is to meet its long-term greenhouse gas reduction targets. And as Walkom points out, even if the document never emerged, “the Trudeau Liberals have already promised to undertake many of the manifesto’s recommendations.” Bottom line: the use of “manifesto” in the title may evoke a strong partisan reaction, but there’s nothing original or particularly detailed about its core message, at least not to Ontarians. So why the controversy? Because at the NDP’s federal convention in Edmonton this past week, it put Alberta Premier Rachel Notley on the spot. She didn’t hesitate to call the document naïve, and many say discussion of the document at the convention created a rift within the NDP. But if Klein’s and Lewis’s goal was to stimulate a public conversation, they definitely succeeded.

It’s being declared a major milestone. A U.S. federal magistrate ruled this past week that 21 kids from Oregon can sue the U.S. government for failing to do enough to reduce the risks of climate change. Their argument is that everyone from the U.S. president to certain federal agencies are violating the Fifth Amendment of the U.S. constitution, which guarantees everyone — youth included — have the fundamental right to life, liberty and property. By not doing enough to tackle global warming, government is denying their future access to a healthy climate. Whether or not these kids win in federal court, the fact their case has gotten this far should be a wakeup call for other jurisdictions. So far, no major suits have emerged in Ontario, but the day could come.

The Big Picture: North Pole moving away from Canada

Climate change does weird things to the planet, as frequent discoveries seem to illustrate. The latest is that the shifting weight of melting ice sheets is causing the Earth to wobble a bit more than usual on its axis. Wobbling is always happening, but NASA researchers believe climate change has caused a dramatic redirection of the axis since 2000. 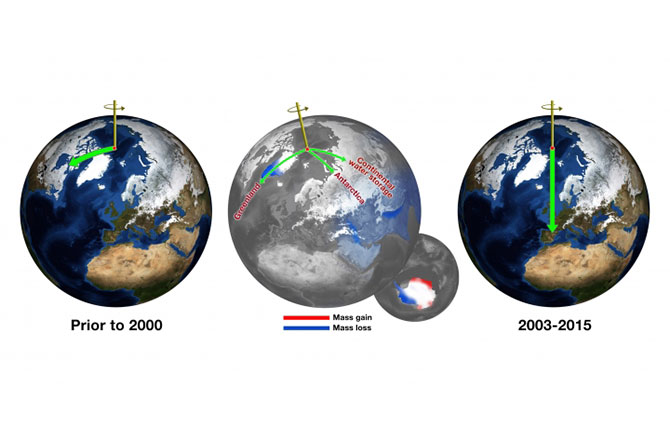 They say that for decades the North Pole was slowly drifting toward Canada, but 15 years ago it began to gradually shift toward the Greenwich Meridian, a north-south line that cuts through the United Kingdom. Rapid melting of ice sheets, particularly the Greenland sheet, is responsible for about two-thirds of the shifting, the scientists estimate. “What I can tell you is we anticipate a big loss of mass from West Antarctic and Greenland ice sheets and that will mean that the general direction of the pole won’t go back to Canada for sure,” said Surendra Adhikari, a researcher at NASA’s Jet Propulsion Lab.

It’s no secret that ocean waters are warming. There’s a warm layer of water nicknamed “the blob” in the northeastern Pacific, El Niño has turned up the heat in the tropical and southern Pacific, and a battle of air flows in the North Atlantic has resulted in unusual warming in Caribbean waters. Climate change is a big cause of all of this heating, and scientists say it’s causing mass bleaching of coral reefs around the world. “We are currently experiencing the longest global coral bleaching event ever observed,” Mark Eakin, the Coral Reef Watch coordinator at the National Oceanic and Atmospheric Administration, told the New York Times this past week. “We are going to lose a lot of the world’s reefs during this event.” 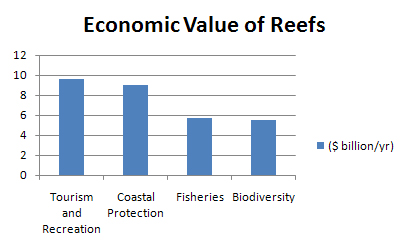 The problem, as the article points out, is that it can take centuries for reefs to form but just weeks for them to be destroyed. The largest bleaching, at Australia’s Great Barrier Reef, was just recently confirmed after researchers surveyed 520 individual reefs in one region. They found that only four reefs didn’t show signs of bleaching, while about 1,000 kilometres of reef showed significant bleaching. And this, they point out, is relatively new. Previously, these reefs were in “pristine condition,” according to the New York Times.

It’s bad news, given the importance of coral reefs to the ocean ecosystem. It’s food for fish and it offers shelter for all sorts of creatures. When reefs die, the fear is that much of associated marine life dies as well as the impact trickles through the food chain.