Charging ahead? Provincial plans to build an electric vehicle charging corridor are down to the wire

Queen’s Park wants to boost the number of EVs on the road and has promised hundreds of new charging stations by the end of March. Only a handful have been installed so far
By Jessica Leeder - Published on Feb 13, 2017
While the province pledged to have a $20-million network of fast EV chargers live no later than the end of March, less than 10 per cent of the stations are currently installed and ready to use. (Håkan Dahlström/Creative Commons)

A continuing boom in sales of electric vehicles in Ontario is about to put the province’s 10,000th clean car on the road. But the owners of those vehicles may not be able to make as many long-distance highway treks as they’d hoped — at least not in the short term.

While the province pledged to have a $20-million network of fast EV chargers live no later than the end of March, less than 10 per cent of the stations are currently installed and ready for use.

Just 33 of 485 planned chargers are installed and online, according to data provided to TVO.org last week by Bob Nichols, a spokesman for the Ministry of Transportation. Of those 33, just six are Level 3 “fast” chargers capable of refuelling a battery-operated vehicle up to 80 per cent in about half an hour — a tiny fraction of the 211 that are planned. 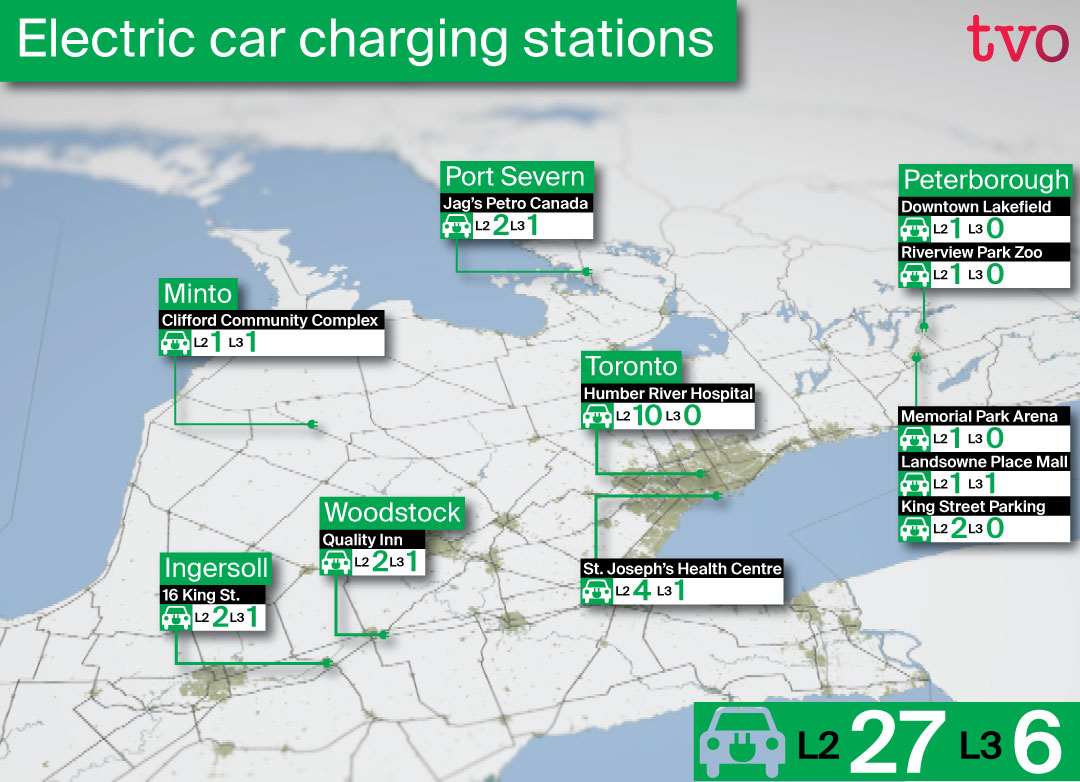 The charging network, designed to form a cross-province corridor to expand the long range mobility of EV drivers, has been touted as a key pillar of Ontario’s strategy to increase the number of clean vehicles on the road. By 2020, as part of its Climate Change Action Plan, the government would like EVs to make up 5 per cent of total vehicle sales. Currently, the number hovers between 1 and 2 per cent.

Nichols says that the 24 public and private sector partners who were awarded grants by the province to install the charging stations are all “tracking” to have them in service by the target date.

However, there is growing skepticism that deadline can be met — and concerns the delay may deter prospective buyers.

The list of plug-in vehicles that can travel longer distances is growing for consumers, who have a total of 34 hybrid and battery-powered options to choose from in Canada. While Tesla’s six-figure models S and X are capable of going nearly 500 kilometres on a single battery charge, Chevrolet’s long-range Bolt has begun arriving on car lots to offer similarly long range but at a fraction of the price. Capable of going 385 kilometres on a single battery charge, the all-electric Bolt will cost just over $30,000 in Ontario after provincial rebates (the sticker price is $44,495 before incentives). A game-changer due to its combination of long distance capability and low pricing, the Bolt is expected to power the increasing sales trajectory of EVs in Ontario and across the country.

While responsibility for the stations has been divided between the 24 partners, it is not split equally. One contractor, a Mississauga-based company called Koben Systems Inc., or KSI, won more than half of the $20-million grant purse with an $11.4-million grant. The company, owned by Vic Burconak, is responsible for installing 337 chargers (193 Level 2 and 144 Level 3). So far, only three are live, according to a TVO.org analysis of data provided by Nichol, the provincial spokesman, and the list of stations KSI is slated to install. (KSI did not respond to repeated requests for comment.)

“March 2017 was an ambitious goal … and I don’t think magic happened,” says Matt Stevens, CEO of FleetCarma, a Waterloo-based fleet management platform that supports the adoption and management of EVs. His company will host six chargers on the provincial network, called Electric Vehicle Charging Ontario (EVCO), four of which are already up and running. Two more are scheduled to come online in the coming weeks.

“Our view is that getting the ... fast charger network in place is critical for us to hit our goals,” Stevens said, adding: “Whoever is carrying that torch, we just hope they succeed. That is the key. We hope they don’t botch it up because, I think, that would hurt all of the industry.”

“Unless they’re going to be working double-time to get this done, they’re going to miss the deadline,” says Kumar Saha, a senior automotive analyst with Frost and Sullivan in Toronto. “A big barrier for EV sales has been the charging infrastructure,” he says, adding that the planned provincial network helped alleviate consumer fears, although not permanently. “If there is a sense among consumers that this is never going to be built, that’s going to be a different equation.”

Cara Clairman is the CEO of Plug’n Drive, an Ontario-based non-profit that devotes much time to educating potential buyers about EVs. “It’s not going to be good for anybody in the sector if this doesn’t succeed,” she says. For many drivers, the charging stations may not actually be necessary: she says research shows most people, regardless of vehicle type, drive 50 kilometres or less per day, a distance that rarely requires charging away from home or the office. But that reality may not matter much in terms of boosting the number of EVs on the road. “The public charging network is critical to get people over the hump,” Clairman says. “It is important psychologically to new buyers — they believe they are going to need it.”

Photo courtesy of Håkan Dahlström and licensed for commercial use under a Creative Commons licence. (See the uncropped version)

Election Canada 2021
Who has the Best Climate Plan?