Kent Monkman's powerful 'Shame and Prejudice' exhibit paints Indigenous people back into the story of Canada's origins
By TVO Current Affairs - Published on Jul 05, 2017
In 'The Scream,' Kent Monkman depicts the exact moment that Indigenous children were removed from their parents. (Image courtesy of the artist)

Winnipeg artist Kent Monkman served as both curator and artist of Shame and Prejudice: A Story of Resilience, an exhibit that spans 150 years of Canadian history from an Indigenous perspective. The exhibit, commissioned by and launched at the University of Toronto, will continue to travel across Canada through 2020. In tonight's episode of The Agenda in the Summer, Nam Kiwanunka speaks to Monkman for a deeper understanding of the work as a whole, and some of the paintings.  "Our voices need to be heard," says Monkman during the interview.  "This was an opportunity to educate people, to create art that could move people, create awareness, inform. Being silent, or stepping out, was not really an option for me. I felt it was a very important moment to take some of the spotlight and to address the many issues and histories that have largely been kept quiet."

"I was already familiar with the Fathers of Confederation painting, and I'm sure many Canadians are. It's sort of the iconic image of Confederation. But it excludes Indigenous people and the carving up of Canada into parcels of land to provinces. I mean, no Indigenous voice is present at that table. And when I looked at that composition I noticed that there was a footstool in the foreground that was empty or vacant, so I thought that was a perfect place to perch my alter-ego, Miss Chief, in this sort of intervention where she represents an Indigenous point of view. I decided to paint her nude in the most in-your-face pose, directing her look toward these Fathers of Confederation.

"I created Miss Chief a number of years ago, probably in 2004. I was looking at the work of European settler artists. 19th century artists like George Catlin specifically, and a couple of others, were making paintings of themselves in their work and I wanted to challenge their work and the subjectivity of their work so I decided that by creating an alter-ego that could appear to live in that period where she was painting herself in the work, that would be an effective way to engage with the dynamic of artist and model.

"She's a trickster in that she rampages through art history, upending the tables of power and the dynamics of power, and because she's an artistic persona she's changing the narratives." 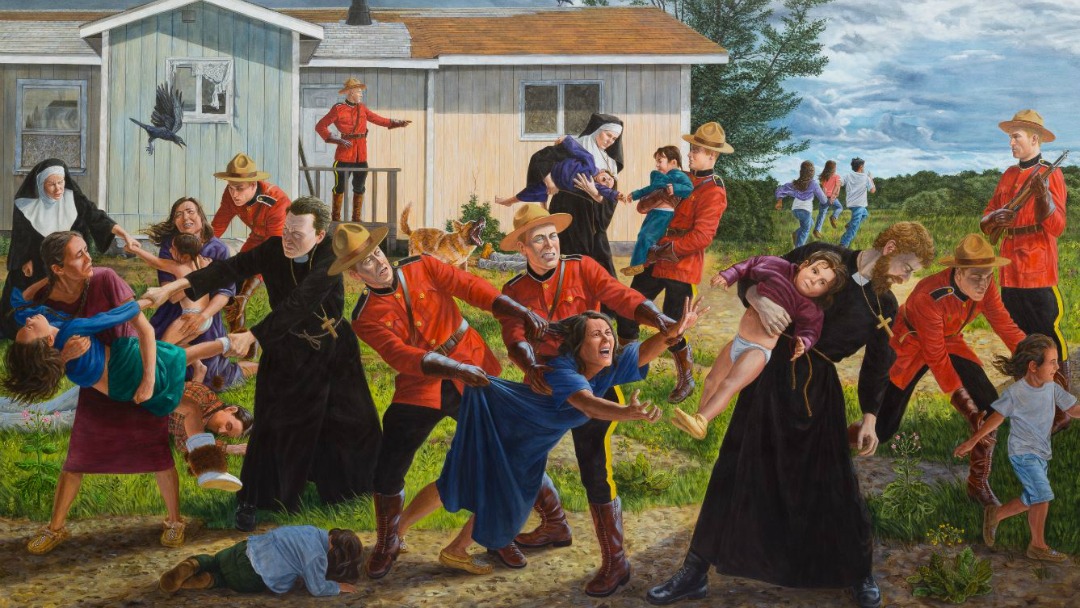 "[In] one of the chapters in this exhibition I wanted to reflect on residential schools and the Sixties Scoop. And to me what was at the core of these two things was removal of children. So I chose to focus on that moment when the Mounties and the priests and the nuns would come to the reserves and take the children away.

"The TRC [Truth and Reconciliation Commission report] describes the exact moment I painted, the sometimes violent removal of the children, very emotionally upsetting of course to the parents and families. I wanted to approach that subject as honestly as I could."

Study for the Removal of Children 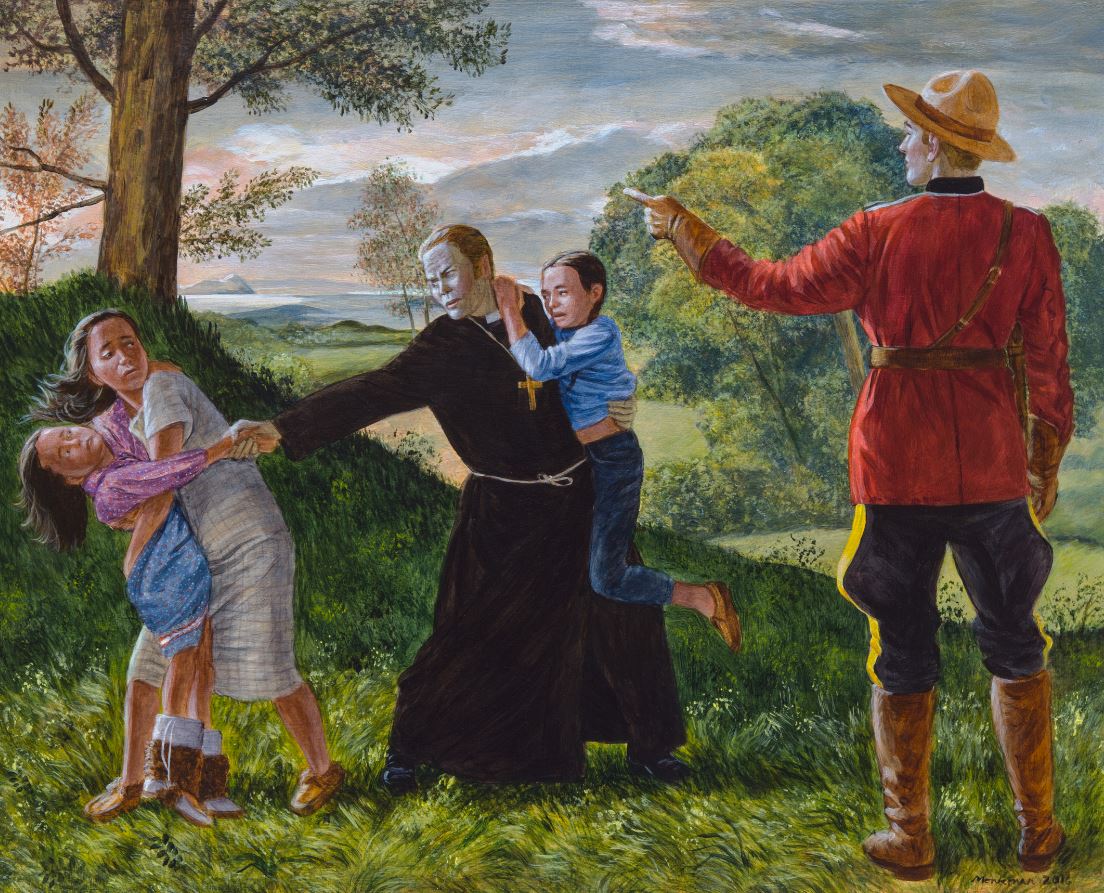 Death of the Virgin (After Caravaggio) 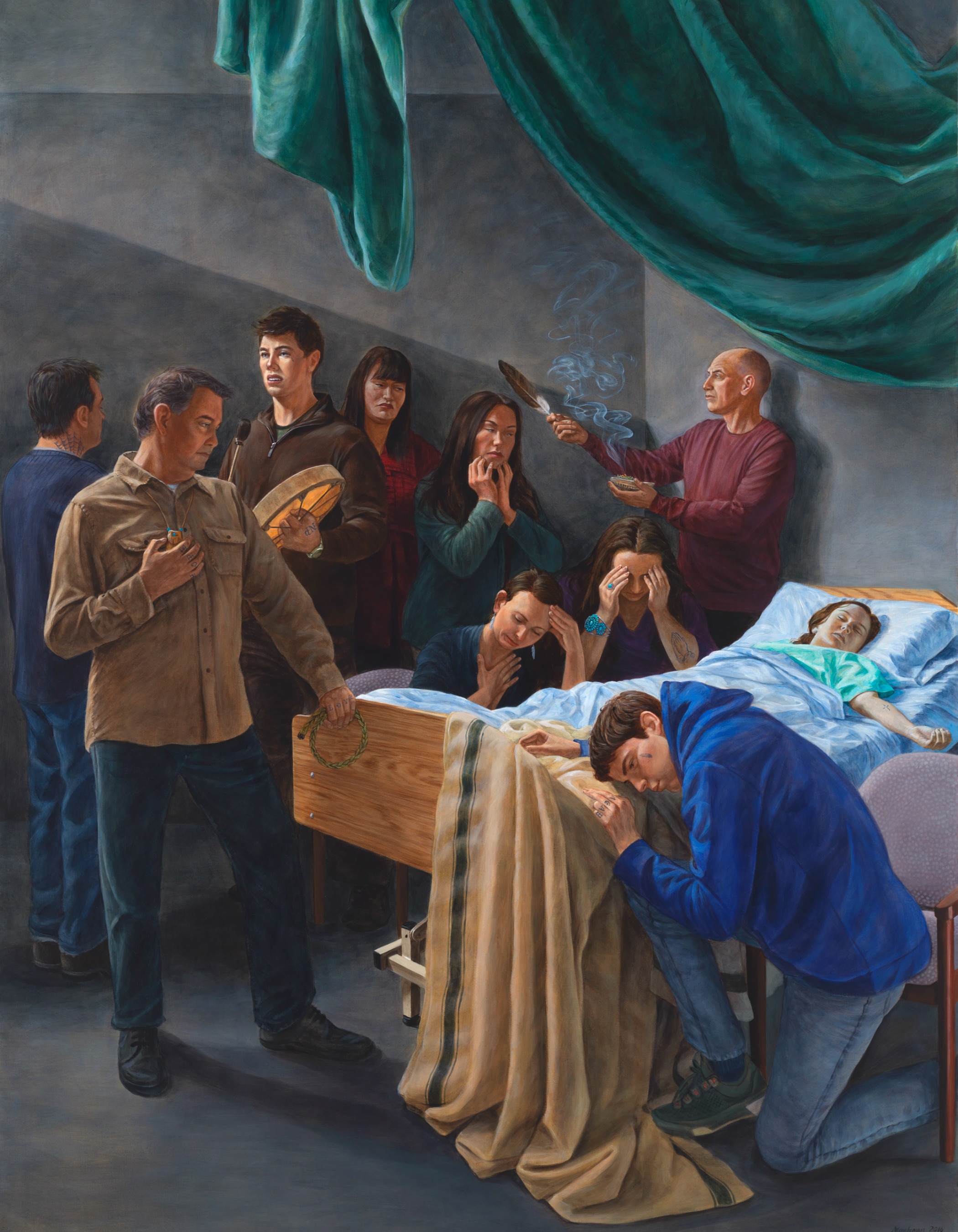 "I draw a lot of inspiration from classical painting. I love Caravaggio's paintings because there's an element of realism there that is important for me. This body of work was a bit of a shift in my art practice in that we started to photograph real people. I didn't want these people to look like generic people, I wanted them to really feel like humans, real Indigenous people with real lives. When I saw [Caravaggio's] painting and I saw the virgin lying in the bed, I immediately thought of missing and murdered women, I thought of teen suicide. In this painting I was able to kind of bridge a number of different themes in the exhibition and talk about sickness and healing, as well." 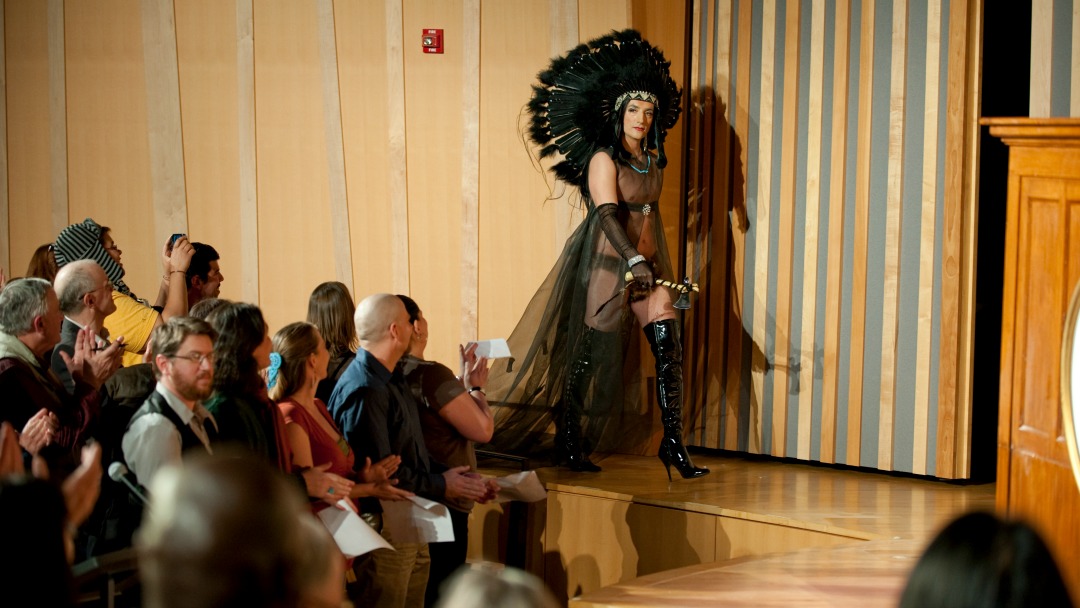 "There's a side of me that's the really serious artist who works hard in my practice. Miss Chief brings a lot of humour to the practice, she brings a lot of fun ... I never really considered myself as a performance artist before I created this character, but once she was brought to life I realized there was so much more potential to speak ... You can say and create art in performance language that you can't in a painting so it's really expanded my ability to communicate with people."