Census data shows Canada’s population is aging fast. What does that mean for Ontario?

StatsCan data released this week may force the provincial government to start thinking differently about health-care funding and the future of rural Ontario
By Daniel Kitts - Published on May 04, 2017
New census figures that show Ontario is aging may cause policymaking headaches in the near future. (Sean Kilpatrick/CP)

Canadians are getting older. Of course, you say: we all get a little older every day. But new census figures released Wednesday by Statistics Canada show there are more people in the country above age 65 than there are people below 15, which hasn’t happened since 1871. That will make life difficult for Ontario policymakers when they consider what to do about health care — and it raises questions about the nature of the province’s urban-rural economic divide.

Seniors make up 16.7 per cent of Ontario’s population, barely below the national average of 16.9 per cent. (Among the provinces, Nova Scotia and New Brunswick have the highest proportion of seniors at 19.9 per cent; Alberta has the lowest at 12.3 per cent.) But it’s the dispersion of those seniors that could be a challenge for future provincial governments, says Carleton University economist Frances Woolley. “You have parts of Ontario that are aging rapidly,” she says, “and you have parts of Ontario that are really young.”

The proportion of seniors in most regions of the GTA is lower than the Canadian average. But in more sparsely populated central, eastern, and northern regions the proportion is considerably higher: in Algoma, which includes Sault Ste. Marie, 23.6 per cent of the population is over 65; in Prince Edward County, near Kingston, it’s 29.8 per cent; in Haliburton, 32.9 per cent. 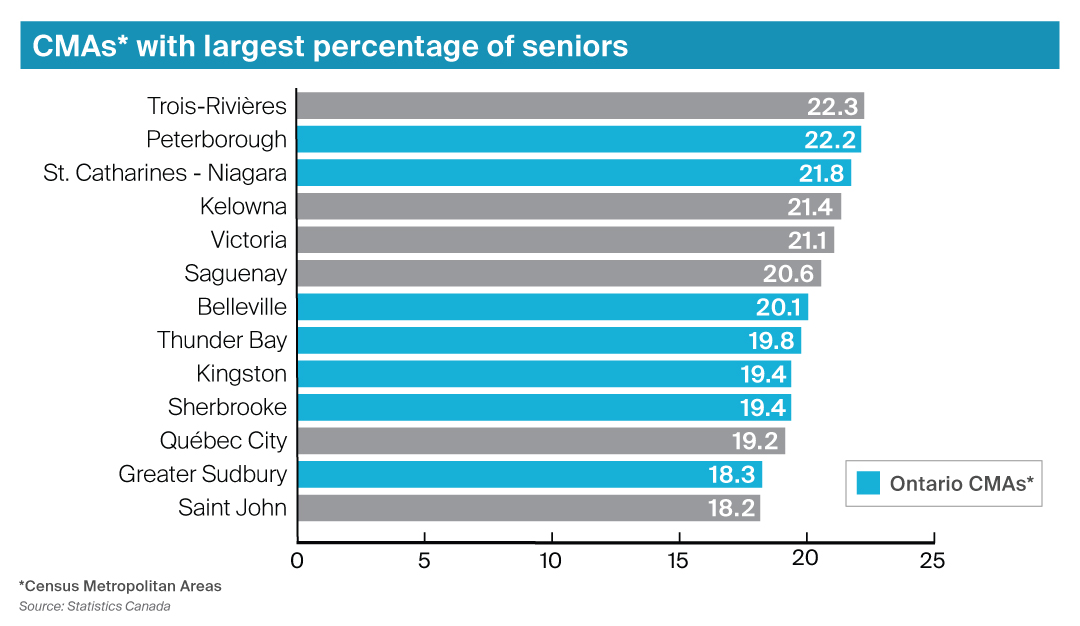 This partly due to well-documented rural flight in Ontario — young people heading to big cities to find work, leaving their hometowns older and poorer. But Woolley notes that some seniors are selling their urban homes and moving to smaller communities, bringing their wealth with them — although it’s unclear whether those communities see any economic benefit from the phenomenon.

For some politicians, such questions are likely to take a back seat to the health budget, and how an ever-growing cohort of seniors will affect it. (As UBC economist Kevin Milligan has pointed out, the number of Canadians age 75 and older is set to explode in the 2020s, and it’s in that age bracket that health costs really start to mount.)

And it’s not just traditional health costs policymakers will have to think about, Woolley says. While we tend to think about doctors and hospitals when we discuss health-care spending, she explains, there’s also likely to be an increased need for home care as the population ages.

“This isn’t necessarily OHIP budgets,” she says. “This is also going to be social services budgets. A lot of this home care stuff isn’t coming out of OHIP.”

McMaster University economist Michael Veall agrees that care for seniors outside the traditional health-care system is something Ontario must consider more carefully. Still, he’s not sure costs will increase catastrophically in the near future, as some predict.

“I think it’s possible that as life expectancy increases, so does the number of years of healthy life expectancy,” he says. “So the demand on the health-care system from aging itself may be overestimated.”

Of course, that could cause a different political headache: the prospect of having to raise the retirement age above 65, which is bound to anger at least some voters. (While Stephen Harper’s Conservatives did decide to increase eligibility for old age security from 65 to 67, the Trudeau government rolled it back to 65 in its first budget.)

Although some people can’t work past 65 for health reasons, Veall says, the notion that everyone should retire by their mid-60s is going to put enormous fiscal pressures on the federal government— unless it’s willing to reconsider when and how people qualify for old-age benefits.

“The arithmetic is pretty striking,” he says. “People are spending less time in the workforce because they’re spending more time getting educated. And at the same time they’re living longer, which is a wonderful thing. But it makes it harder for governments to sustain transfer payments to the older population when the older population is increasing.”

Opinion
Canada lost a former prime minister. I lost a mentor
OPINION: I first met John Turner more than 20 years ago. Our friendship shaped the course of my life and my sense of this country.
Arthur Milnes