TVO.org speaks with First Nations, Métis, and Inuit people from across Ontario about what the day means to them — and how they’ll be marking it during the pandemic
By Shelby Lisk - Published on Jun 19, 2020
Johl Whiteduck Ringuette was born and raised on the traditional territory of the Nipissing First Nation. (Courtesy of Johl Whiteduck Ringuette)

Nearly three years ago, Prime Minister Justin Trudeau announced that National Aboriginal Day, which was established in 1996, would be known as National Indigenous Peoples Day moving forward. This year, the celebration of Indigenous cultures, traditions, and contributions — which takes place on the summer solstice each June 21 — faces another change: COVID-19 has meant that many events have been cancelled or moved online.

With the 24th-annual National Indigenous Peoples Day approaching on Sunday, TVO.org spoke with First Nations, Inuit, and Métis people from across Ontario about how they feel about the day and its significance — and how they plan to celebrate it during a global pandemic.

Chef Johl Whiteduck Ringuette is Anishnawbe, Mink Clan, of Ojibwe and Algonquin First Nations. He was born and raised on the traditional territory of the Nipissing First Nation, on land covered by the Robinson-Huron Treaty. Whiteduck Ringuette is also the owner of NishDish Marketeria and Catering, which has been reclaiming and serving traditional Anishinawbe food since 2005.

“I always celebrate by working, because I’m one of the only Indigenous-owned Indigenous-food providers. And, back when I opened, there weren’t any others. It was just me for 15 years. I love being in the community. I love bringing our food to our people and celebrating us, seeing all our faces in one place and getting to say hi to everybody, all the people you don’t get to see all year long because you’re constantly working. I absolutely love it. Not being at a major celebration for our community this year, I’m going to celebrate in the sacred way that I can. I will create a spirit plate after I create all the feast dishes that I want to do that day. I will put the spirit plate down for our Elders and knowledge keepers, our families, for Mother Earth.”

Jaime Morse (formerly Koebel) is Nehiyaw/Michif (Cree/Métis) from Lac La Biche, Treaty 6 Territory, Alberta, and has been living on the unceded Algonquin Territory of the Anishnaabeg since 2000. She is an educator who explores social, political, and cultural stories and teachings through Indigenous arts and culture.

“I would either be performing, educating, or teaching. Fish-scale art workshops, jigging workshops, sometimes we would be holding an art exhibition, planning entire events, talking to the media — that’s usually my Indigenous solstice day or leading up to it, and it becomes a lot of energy. I like that this year I don’t actually have to physically be anywhere but in my home. But I also miss the community. I sometimes think that Indigenous Peoples Day should be more for us, because a lot of what we do is for the community. But there’s also an aspect where we just want to sit back and celebrate and not be the ones to have to perform and not be the ones to have to teach, but to say, ‘Hey, this is the day for us.’ There definitely is some opportunity for that, but there’s never been a solstice where I’m not working.”

Andrew Ashkewe is Bear Clan from the Chippewas of Nawash Unceded First Nation. He currently lives and works on unceded Algonquin, Anishinabek territory, with his wife, Katie, and baby daughter.

“It’s kind of evolved for me. This is my first one with my daughter. So, before, when I was a kid, it was about raising awareness — about saying, ‘Hey, we’re still here.’ But, with a new daughter, me and Katie have kind of shifted our focus. I want to instill a pride in my daughter, so we’re going to use this as a way of building up her confidence and her pride in being an Indigenous woman. We’re going to make sure that we celebrate it every year and we make sure that she’s proud of who she is and her heritage. That’s my job when it comes to National Indigenous Peoples Day now.”

Riley Yesno is an Anishinaabe woman from Eabametoong First Nation. She grew up in Animikii-wiikwedong, on the traditional territory of the Anishinaabeg, and now lives in Dish With One Spoon territory, where she is completing a degree in Indigenous studies and political science.

“My tradition, if we’ll call it that, is just focusing more on our Indigenous voices, and I’m spending a good amount of time thinking critically about our communities, the state of the country, all of these things. I know it’s Indigenous Peoples Day in Canada, but our communities span borders, and so looking at everything happening in the States and then everything happening here, I think it will be interesting to see how this day that’s supposed to be honoring Indigenous people will play out when we’re also focused in on how much these countries are killing us. I think they’re very paradoxical; they don’t line up, those two realities. I’m wondering how the government — who I’m sure will be posting things on their INAC Twitter page and all of that —plans to address that, and what conversations will we have around that?”

Theland Kicknosway is Wolf Clan from the Potawatami/Cree Nation, a member of Walpole Island Bkejwanong Territory. He is a singer, a grass and hoop dancer, and a high-school student who helps with ceremonies in many places. Kicknosway is looking forward to performing virtually at this year’s Summer Solstice Indigenous Festival on June 20.

“To me, Indigenous Peoples Day or National Indigenous History Month means that we learn as much as we can, in a respectful way, about our culture, our language, and our heritage — learning the truth about our history and fully understanding that we have to have uncomfortable conversations, and we have to talk about it, because, if we don’t talk about it, then no one’s going to learn. Indigenous Peoples Day is a day of reflection, and it’s a day for me to feel that people will hopefully hear our points, hear what we want to say. But one thing that I know is that I’m proud to be Indigenous every day.”

Kelly Duquette is a Red River Métis artist and lawyer who grew up in Treaty 3 Territory (the only numbered treaty within Canada to have the Métis collectively sign through the Half-Breed Adhesion), in a town called Atikokan. Duquette was not introduced to her Métis heritage until later in her childhood and has found artistic inspiration through the discovery of her identity.

“A lot of people, when they hear ‘Aboriginal,’ they only think First Nation. I hear a lot of people say, like, ‘Oh, I am Métis and Aboriginal,’ or, ‘I am Métis and Indigenous.’ A lot of people don’t realize that Indigenous is all-encompassing. I think, in ways, Métis culture could get lost in [the celebrations], but, overall, I think we’ve always been asked for our perspectives as well. Even when I was invited to speak at the Senate [to the Committee on Aboriginal Peoples on National Indigenous Peoples day, in 2016], there were three other Métis people or more that were asked to share their perspectives and were able to speak about their experiences.”

Tehatsistahawi (Tsista) Kennedy is a member of the Turtle Clan from Oneida Nation of the Thames. He is the first-ever Indigenous student to sit on the Thames Valley District School Board. He is also an artist and has a baby daughter, Winona.

“Growing up in Kitchener-Waterloo, there isn’t really a big Indigenous population, so people would often come to me and ask me to do a speech or a demonstration or whatever I felt comfortable doing, which felt a little tokenizing. On the other hand, I’m doing some good by providing a little bit of insight into what Indigenous culture is for the nations I belong to, so I’ve always seen it as a tool.”

Melissa Tillumaluk Irwin is an Inuk woman from Igluligaarjuk, Nunavut, who currently lives on unceded Algonquin territory. She is an educator at Nunavut Sivuniksavut, a post-secondary program for Inuit youth. Eating traditional foods and purchasing Indigenous arts and jewellery are her favourite things to do.

“Celebrating our food, our art, our culture, our language, our presence, and the beauty that we share, not just within our own communities, but the beauty that we contribute to the human race — when that’s compromised, when our people aren’t recognized as equals, you become very protective. You go through different emotions and assessments of our place, where we see ourselves, where others see us. Sometimes on non-Indigenous day, living here in Ontario, if I’m wearing my parka, I’m looked at differently or questioned. We’re a minority. We’re not fully understood right here in Canada, in our own lands, and it can get tiring. Indigenous Peoples Day, to me, is a day where I get to openly — with pride — celebrate who I am and who we are without feeling judged.”

Victoria Ransom or Wahi:ia is Wolf Clan, Mohawk, from Akwesasne. Ransom is an artist who incorporates Haudenosaunee motifs into her paintings and pen-and-ink works. She is currently in a Mohawk-language program so that she can teach her son the language.

These interviews have been condensed and edited for length and clarity.

Indigenous
‘A great land defender and defender of the people’: Remembering Chief Gary Potts
For decades, the Anishinaabe trapper-turned-chief advocated for his community — and inspired respect across partisan lines. TVO.org speaks with the people whose lives he touched.
Nick Dunne
Indigenous
Creating Space for Indigenous Stories
Indigenous
25 Years After the Ipperwash Crisis 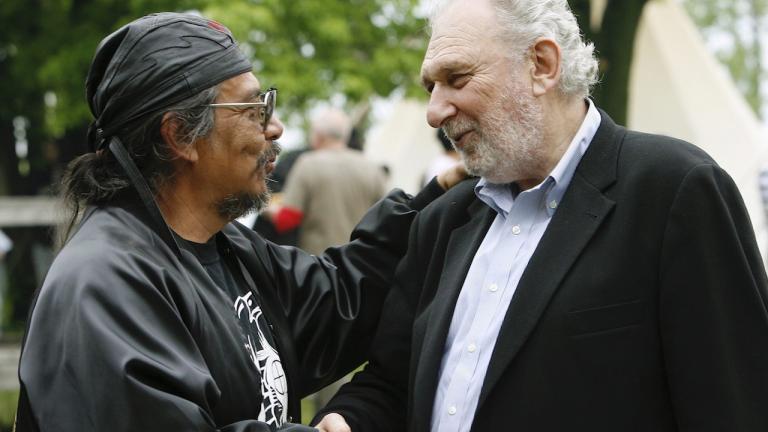 Opinion
What are the lasting lessons from the Ipperwash inquiry?
Michael Bryant
sfy39587stp16