Can we strike a Canadian compromise on John A. Macdonald’s legacy?

Even though the Elementary Teachers’ Federation of Ontario’s resolution to strip our first prime minister’s name off the province’s schools made plenty of people furious, we should probably thank the organization for forcing a long overdue debate in this province.

Americans are neck-deep in their own version of this issue. In community after community, they’re taking down statues of Confederate soldiers and politicians, having realized that many people don’t regard those men as heroes, but rather as proponents of slavery.

And perhaps making that decision even easier is the fact that men such as Jefferson Davis, Stonewall Jackson, and Robert E. Lee were, in fact, traitors to the United States.

Sir John A. Macdonald was not a traitor himself. On the contrary: he was the single most-important political figure in creating Canada. The eminent historian and columnist Richard Gwyn has said that without Macdonald, British North America could easily have been swept into the American Civil War vortex. Instead, thanks in large part to Sir John, we became our own country and, 150 years on, are the envy of much of the world.

But of course, Macdonald’s utterances about Indigenous peoples do not stand up to 21st-century standards and values. And so, many teachers want his name scraped off the facades of elementary schools across Ontario.

Should we do this? After all, if you’re from an Indigenous community, wouldn’t the sight of Sir John offend you in the same way a statue of Robert E. Lee would offend an African-American?

So is someone you’ve probably never heard of: Nicholas Flood Davin, a lawyer, journalist, member of parliament, and man of letters, originally from Ireland. And that’s mostly what you’ll find out about Davin if you read his headstone.

However, there’s a new plaque beside Davin’s gravesite that adds some greater context to his life. The plaque points out that at the request of Prime Minister John A. Macdonald, Davin wrote a report called “Industrial Schools for Indians and Half-Breeds.” We go on to learn that Davin was an architect of the residential school system, which aimed to remove “the influence of the wigwam” from Indigenous children. The plaque concludes by quoting the Truth and Reconciliation Commission’s view that the policy was tantamount to cultural genocide. 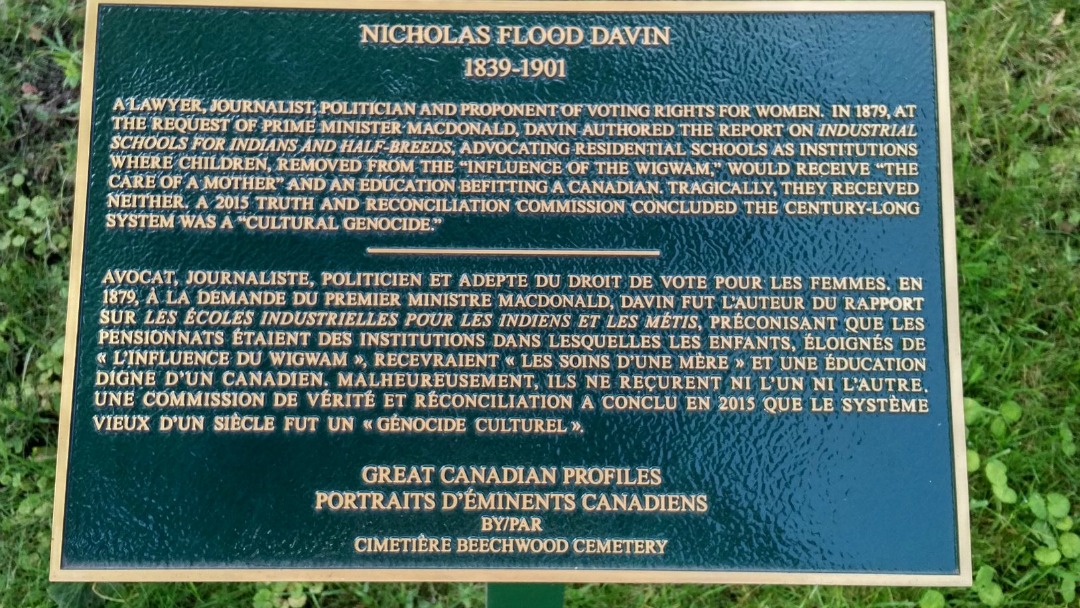 As I read the headstone, then the modern plaque in front of it, I began to wonder whether this wasn’t an appropriate Canadian compromise for other figures from our history whose views were abhorrent by modern standards.

So I wonder: rather than expunging our history of yesterday’s leaders, perhaps we should do what they’ve done at the Beechwood Cemetery. Perhaps we should start erecting a lot more plaques, acknowledging the contribution of the historic figure in question but also explaining the darker side of their legacy.

We really do need to figure this out because it won’t end with Sir John, whose name and face appear on statues, roads, and buildings across the country, not to mention on the $10 bill. Sir Wilfrid Laurier’s face is on the $5 bill, and his name appears on an Ontario university, a prominent Ottawa hotel, and elsewhere. He was also the prime minister who sent the Chinese “head tax” skyrocketing.

This may be one of those wonderful teachable moments in our history: we don’t have to bury the past, because that would actually hinder our ability to learn from it.

Clarification: This post originally stated that Japanese-Canadians were held in "prison camps." The facilities can be more accurately described as "internment camps." [Visit the Canadian Encyclopedia for more information.]