Buzzkillers: A brief history of the LCBO

​From morality background checks, to buying limits, to brown paper bags — how the LCBO tried to keep Ontarians on the straight and narrow
By Jamie Bradburn - Published on Nov 27, 2017
Customers line up at an LCBO in downtown Toronto on New Year’s Eve, 1965. (Boris Spremo/Globe and Mail)

A once-illegal substance. Heated debate about whether the public should be allowed to buy it in government-operated stores. Finally, the decision to make it available to those deemed responsible enough to consume it. When the first stores open in select communities, there are long lineups. Some customers gratefully grab their purchase; others grumble about the confusing new rules, the stock shortages, the unfairness of government monopolies.

No, the substance in question is not marijuana, and this is not a vision of what might happen in Ontario when the first LCBO-run weed stores get up and running in 2018. This is how the LCBO’s first day of business unfolded on June 1, 1927.

After 11 years of prohibition, thirsty customers lined up for hours to buy legal liquor. The first outlets were nothing like the boutique liquor stores of today: the original system was designed to make the experience of purchasing alcohol feel as shameful as possible, and to allow the province to pry into the private habits of Ontarians.

Temperance-minded newspapers hated what they saw that first week. “The thirsty queues of humanity stretching to every liquor store, including men and women, are not only not edifying,” a Globe editorial observed, “but are disgraceful street scenes, a spectacle long to be remembered by a youthful generation which has not learned about booze.”

The stores, generally located away from main streets, resembled banks. Clerks were stationed behind wire grills. New customers could not simply approach them, though: first, they had to be vetted by an LCBO employee whose job it was to determine whether they were moral enough to deserve an annual purchasing permit. 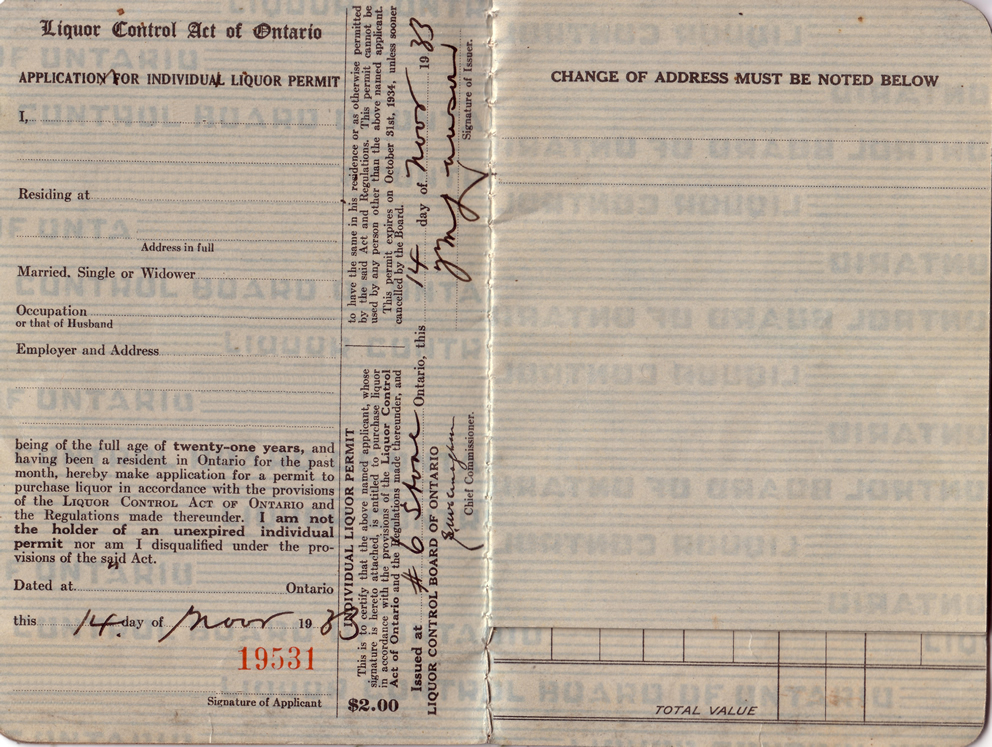 If the customer passed muster, they would be given a passport-sized permit book. To make a purchase, they filled out an order form and took it to a clerk, who reviewed their buying history. If the clerk felt the customer was purchasing too much, he made a note in the permit book, and the order was partially or fully refused. Those who were deemed to have abused their purchasing privileges — because they had tried to exceed government limits, or because the employee thought the amount, even if legal, was too much for the customer's own good — would lose their permit and find themselves added to the provincial “interdiction” list. If some or all of the purchase was approved, a detailed record of the sale would be written in the permit book. The order would then be brought out from the stockroom in a brown paper bag.

LCBO officials believed that superior customer service was reflected not in sales volume but in the “prevalence of good social conditions in the surrounding community and absence of drunkenness and of complaints from neglected dependents.” They felt that the strict regulation of purchases improved the lives of families whose main income earner might otherwise drink away their money. Store staff were buried in memos ordering them to follow highly detailed procedures and reporting requirements, which could be stressful to carry out when it came to handling the orders of friends and neighbours. The system was highly prejudicial — women and visible minorities were effectively prevented from working in stores, while members of First Nations weren’t allowed to hold permits until 1959. 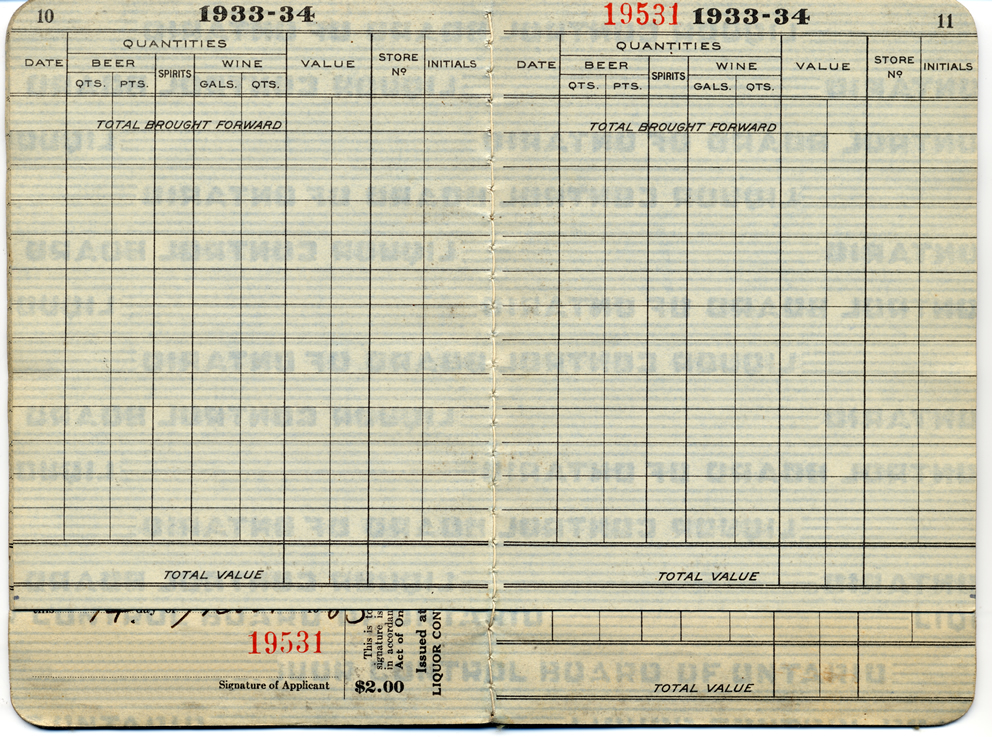 Such paternalistic attitudes took decades to ease up. Permit books were scrapped in 1958, replaced by wallet cards, which remained in effect for four more years. Eventually, liquor was allowed to be displayed on the sales floor: small wine displays appeared in 1958, followed by catalogues in 1965. LCBO officials sensed that Ontarians were tired of being made to feel ashamed when buying alcohol, but the agency still feared the influence of temperance activists, who complained that government money should be spent on education or health care, rather than better liquor stores.

A radical reinvention of customer service debuted in Weston in February 1969. “The customer will enter through a turnstile, select the bottles of his choice and leave through one of five desks,” the Toronto Evening Telegram reported. “Two walls are now lined with rum and Canadian whiskys and there are three islands of shelves loaded with liqueurs, brandies and other hard exotics. A separate room, panelled and ornamented with wine barrels, contains a wide range of wines.” Out went order slips, and in came a pair of product consultants, who were trained to offer advice. Customers raved about the new freedom self-service allowed, but there were criticisms from temperance advocates (“Criminality is related to alcohol,” a Toronto minister observed) and some LCBO employees (“It’ll never work,” a clerk at a traditional store noted. “It’ll be slower and there will be a lot of shoplifting”). Although the LCBO announced in 1973 that all stores would convert to self-service, it would take another 20 years for the last counter-service locations to be phased out.

Watch Steve Paikin report on the 60th anniversary of the LCBO on CBC in 1987.

Not all employees immediately embraced the move toward helpful customer service. “There is a general surliness about these gloomy guys which hangs like a pall about the counter,” observed a letter to the editor in the Globe and Mail in 1974, which also pointed out that staff frequently displayed contempt for and ridiculed customers with drinking problems. As for product knowledge, historian Donald Creighton complained in 1977 that staff were “ignorant of the merits of rival brands and firms, and even of the quantities of different wine-producing regions. They have never heard of vintages. And at the checkout counters they parcel up bottles as if they were bags of sugar or cartons of salt.”

The awards for store design and innovative retailing that the LCBO received by the end of the 20th century would have horrified the early shapers of the agency. It remains to be seen which incarnation of the LCBO — stern and sterile, or colourful and customer-friendly — will be used as a blueprint for the marijuana stores of the 21st century.